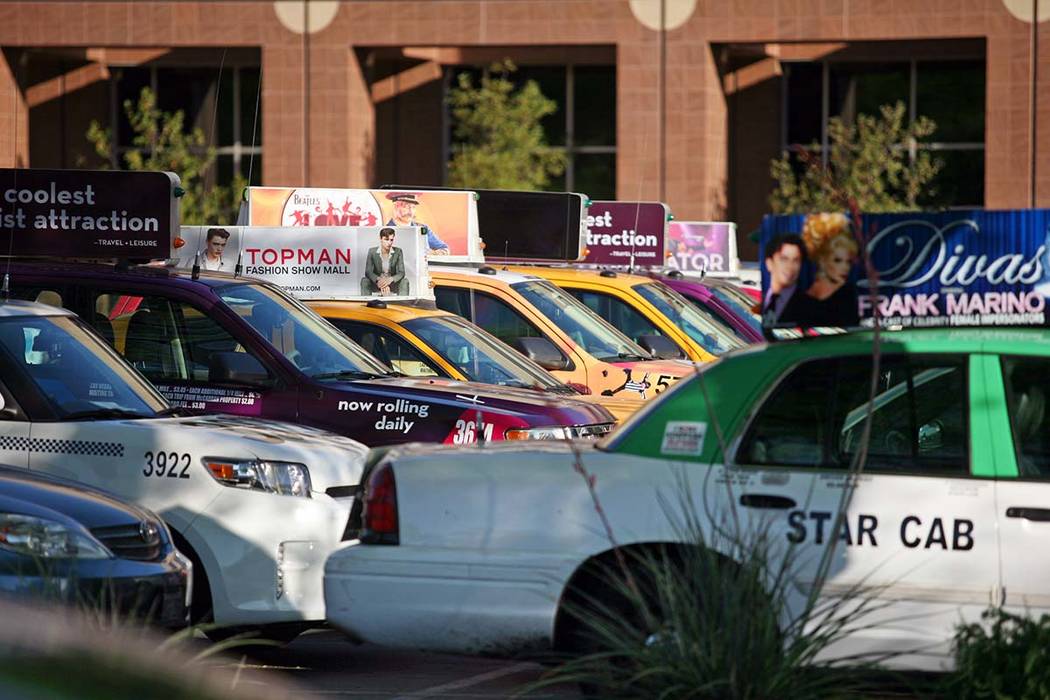 Cabs are parked outside of Grant Sawyer Building Monday, March 30, 2015, in Las Vegas. Southern Nevada taxi drivers and Uber supporters were among those who attended a hearing to discuss proposed legislation that would allow transportation network companies, such as Uber, as legal operators in the state of Nevada. (Las Vegas Review-Journal file) 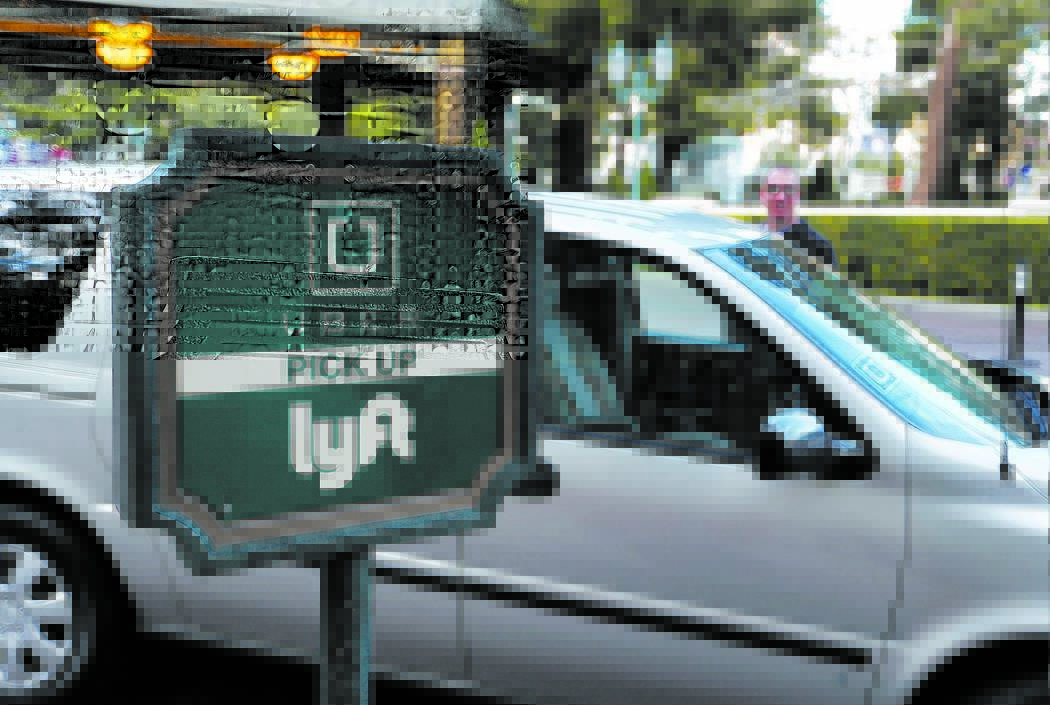 In this Jan. 14, 2016, photo, a driver waits to pick up passengers at an Uber and Lyft pick up area at the Bellagio hotel and casino in Las Vegas. The advent of Uber and Lyft in Nevada last fall has thrown the powerful Las Vegas taxi industry and its regulators into upheaval, as the taxi industry's $3-per-ride credit card processing fee and lack of an online review system look suddenly out of date.(AP Photo/John Locher)

As ride-share services increasingly become the transportation option of choice for many Las Vegas residents and visitors, taxi usage continues to drop.

And as ridership drops, cab companies’ anger rises, largely tied to the lack of regulation drivers of transportation network companies face — and the only way that could change is through legislation.

Although nothing has been submitted to the Legislature yet, discussions are being held to decide the best course of action this legislative session.

“It’s clearly not a level playing field now, it’s been well documented that we’ve been fighting for the last two legislative sessions to try and make it a level playing field,” said Brent Bell, CEO of Whittlesea-Bell Transportation. “But, that hasn’t happened. There’s a few things that we’re working on, but not that I can comment on at this time.”

“We’re proud of our growth in Las Vegas,” an Uber spokesperson said in a statement. “Not only does it represent increased opportunity for drivers, it shows the demand in Las Vegas for additional convenient and affordable transportation options.”

A representatives from Lyft, the other major ride-hailing company, did not respond to requests for comment.

Lyft and Uber aren’t required to provide ridership information to state entities as the taxicab industry is, so one of the only ways to track their ridership is trips to and from McCarran International Airport.

Data collected by McCarran shows that ride-sharing use at the airport has increased in each of the three years it’s been in use in Las Vegas, while taxi use dropped each of those years.

Statistics for overall taxi rides in Southern Nevada over the past three years show the ride-share effect on the taxi industry on a larger scale.

In 2015, the last full year before ride-hailing options were approved for Nevada, 27.5 million rides were provided by the 16 Southern Nevada cab companies. In 2018 taxi rides given in the Las Vegas area were down 37.5 percent compared to 2015, logging 17.2 million trips.

All taxis must have a medallion, which is a small license plate affixed to cabs authorizing them to operate within a jurisdiction. The number of medallions approved is the maximum number of cabs that can be in operation at a given time, according to the Taxicab Authority.

There is no cap on the number of ride-share vehicles that can be in operation in Nevada, Williams said.

Area taxicab companies have grown angry over what they perceive as the lack of regulation for ride-share companies and their drivers.

“The TNC drivers are not regulated, it’s the companies that are regulated and the problem is, Uber and Lyft can’t be trusted to oversee their drivers,” said Johnathan Schwartz, director of Newcab. “The problem is the Nevada Transportation Authority has no authority over those drivers.”

Before a cab company can hire a new driver, they must go through a bevy of steps before they can get behind a wheel and turn their meter on.

A cab driver must be fingerprinted, go through a background check, provide a valid health certificate and go through orientation and safety courses.

Transportation network company drivers must provide their name, address, driver history and proof of registration and go through a background check at the time of their hire and every three years thereafter.

Uber and Lyft drivers are required to obtain a $200 business license from the secretary of state within six months of joining a TNC company. The requirement took effect Oct. 1 and the Transportation Authority is still in the process of auditing numbers to determine how many drivers have complied.

”It’s an incredible oversight of the Legislature,” he said.

Despite calls by cab groups to level the playing field, there were no bills to address the issue on the legislative docket as of last week, Williams said.

Even if a bill to regulate ride-share drivers is introduced this session, Schwartz said he doesn’t like the chances of anything changing given the current makeup of the Legislature.

“Given the makeup of the legislature, I don’t think we’d be successful,” Schwartz said. “In the future I’m hoping changes will be made.”

Transportation network companies have a large financial impact on the Transportation Authority. Of the authority’s $5.6 million 2020-21 fiscal year budget, revenue derived from ride-hailing companies accounted for $2.5 million of that, or 45.4 percent of the budget, Gibbons reported at a meeting of the Assembly Committee on Growth and Infrastructure.

The companies’ economic impact could be a factor in why it’s been a tough sell for the cab industry to have any bill turned into law in previous legislative session, Schwartz said.