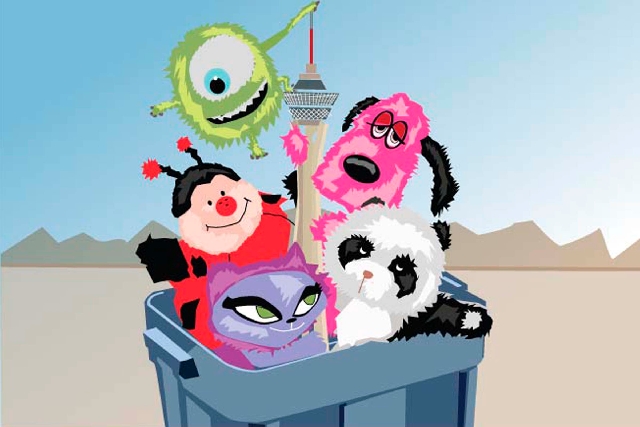 But together, the northeast Las Vegas warehouse and the Summerlin-area corporate headquarters show how far the commercial market has come since the recession, and how far it must go for full recovery.

“We’re seeing some sideways movement as the numbers continue to bounce around,” said Brian Gordon, a principal in the Las Vegas research firm Applied Analysis, which on Tuesday published a report showing mixed trends in commercial real estate.

World Pack USA might not be a household name, but its major client, Pillow Pet, ships a virtual zoo of wildly popular stuffed animals.

It might sound odd to base economic diversity on the backs of cuddly toys, but logistics companies are a business sector state officials want to attract. And at 303,200 square feet — more than double the casino floor at CityCenter — it’s the biggest industrial deal in six years, dwarfing the two-year market average of 13,000 square feet.

But there is a flip side to that big deal: a sleek, empty Class A office building at Town Center Drive and the Las Vegas Beltway that was once home to a dream that fell apart when revenue couldn’t match reality and $100 million in loans came due. When the Nevada Cancer Institute left the building in January, 143,000 square feet of office space hit the market, helping push office vacancies to 26.2 percent in the first quarter, up from 25.7 percent in the fourth quarter and 25.1 percent in first-quarter 2012.

Still, the worst is probably over, Gordon said. Commercial vacancy rates have largely stabilized after skyrocketing in the downturn. Retail has fared the best, falling to 9.8 percent vacancy in the first quarter, down from 10.6 percent a year earlier, as discount retailers have rushed into big box space left vacant by Circuit City, Linens ’n’ Things and other chains.

It will take several years for the commercial market to return to standard vacancy rates, and quarterly ups and downs are to be expected, Gordon said.

For today, at least, World Pack USA is a major up. The decision to come to Las Vegas stems in part from World Pack’s frustration with California’s high taxes, said Stephen Spelman, president of Lee & Associates and World Pack’s leasing representative. City officials and members of the Governor’s Office of Economic Development helped connect the company with development and licensing agencies, but World Pack received no tax incentives to move here.

Deals this big are few and far between in Las Vegas simply because the market doesn’t have many contiguous warehouses of more than 200,000 square feet.

Doherty and Spelman agree that interest in the market is picking up. Doherty said he is working on several deals of more than 300,000 square feet in the planned South 15 Airport Center near Henderson Executive Airport.

Spelman said call volume from potential tenants is near pre-recession levels, though closings lag. If those queries turn into leases, industrial vacancies could fall fast in the next year, he said.

Less clear is the future of the harder-hit office market, in particular the Nevada Cancer Institute building.

Analysts say the market’s consolidation and vacating of space is probably complete, but vacancies remain high with annual job growth a modest 2 percent.

Even in desirable Class A space, the vacancy rate is nearly 25 percent, and with nearly 200,000 square feet of inventory downtown and construction of The Shops at Summerlin Centre soon to resume, competition for tenants will be stiff.

What’s more, the universe of tenants for 143,000 square feet in one building is limited, Gordon said.

“These types of buildings are few and far between. The lead time to see a building of this magnitude occupied could span a number of years,” he said.