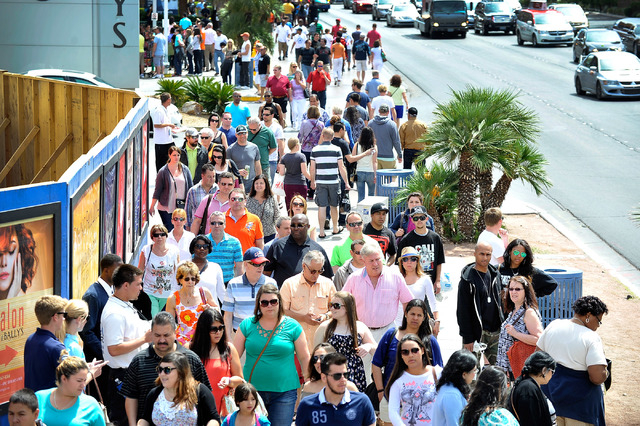 Millennials have become the new target market for the Las Vegas Convention and Visitors Authority.

Billy Vassiliadis, who heads R&R Partners, the Convention and Visitors Authority’s contracted marketing and advertising consultant, told board members Tuesday there would be renewed emphasis in attracting conventioneers, corporate meetings and international travelers as well as the generation born after about 1982 who tend to spend freely for quality entertainment.

Vassiliadis said the Millennials currently outspend Baby Boomers in their trips to Las Vegas because they don’t have many of the expenses — mortgages and car payments, for example — that the city’s traditional visitor market has.

The agency also will work with meeting planners and top business executives to attract conventions and association meetings knowing that competition from other cities is increasing.

“Everybody wants to knock off Las Vegas,” Vassilliadis said. “And the competition is growing. Not only are we competing with Chicago, New York and Orlando, but today it’s a global market.”

Vassiliadis said when his team began researching marketing strategy it threw out past assumptions about the city’s core markets to develop a roadmap to the future.

Vassiliadis said because research is showing that travel attitudes are rapidly changing it would be important to obtain responses from visitors to react quickly to visitor sentiments.

“We will need to sit down with visitors and get their feedback,” he said. “Is there something else in Las Vegas that they’d like to see?”

That type of customized response will help keep Las Vegas ahead of rivals and spur the city’s resort community to provide the type of experiences that will attract the younger market.

Vassiliadis said that type of research convinced the LVCVA to modify its advertising strategy on the fly. Last year, the authority put its “What happens here, stays here” advertising campaign on hiatus while it promoted its new LasVegas.com booking website. R&R’s research found that core visitors resented that that the ads were discontinued, saying the humorous ad series encouraged them to make a return visit to the city.

Ads were quickly returned to key markets and Vassiliadis said they would be part of the new marketing campaign.

Internationally, Vassiliadis said Las Vegas would have a series of small promotions throughout the year in Great Britain instead of one large campaign to keep the city as a vacation option more frequently.

The campaign also will capitalize on special events and corporate sponsorships to target-market groups to make an extra trip to Las Vegas, even for events that aren’t staged here.

Vassiliadis said the city has learned that visitors enjoy coming to Las Vegas for the Super Bowl even though the game is played elsewhere.

It also will focus on leisure travel diversity to attract the Hispanic market and the Lesbian Gay Bisexual and Transgender community.

The R&R presentation sparked a potentially controversial matter for next month’s board meeting.

Authority President and CEO Rossi Ralenkotter said the timing of the delivery of the marketing strategy makes it critical for the board to consider the renewal of R&R’s contract.

In the past, the board opened the contract up for competitive bids or considered a contract extension. Ralenkotter said he wants R&R to make a contract renewal presentation at the board’s November meeting instead of next spring. The contract expires at the end of June, but Ralenkotter doesn’t want to lose continuity in the marketing program as it puts efforts in motion and begins work on a $2.3 billion convention center campus overhaul that will transform the Las Vegas Convention Center to the Las Vegas Global Business District.