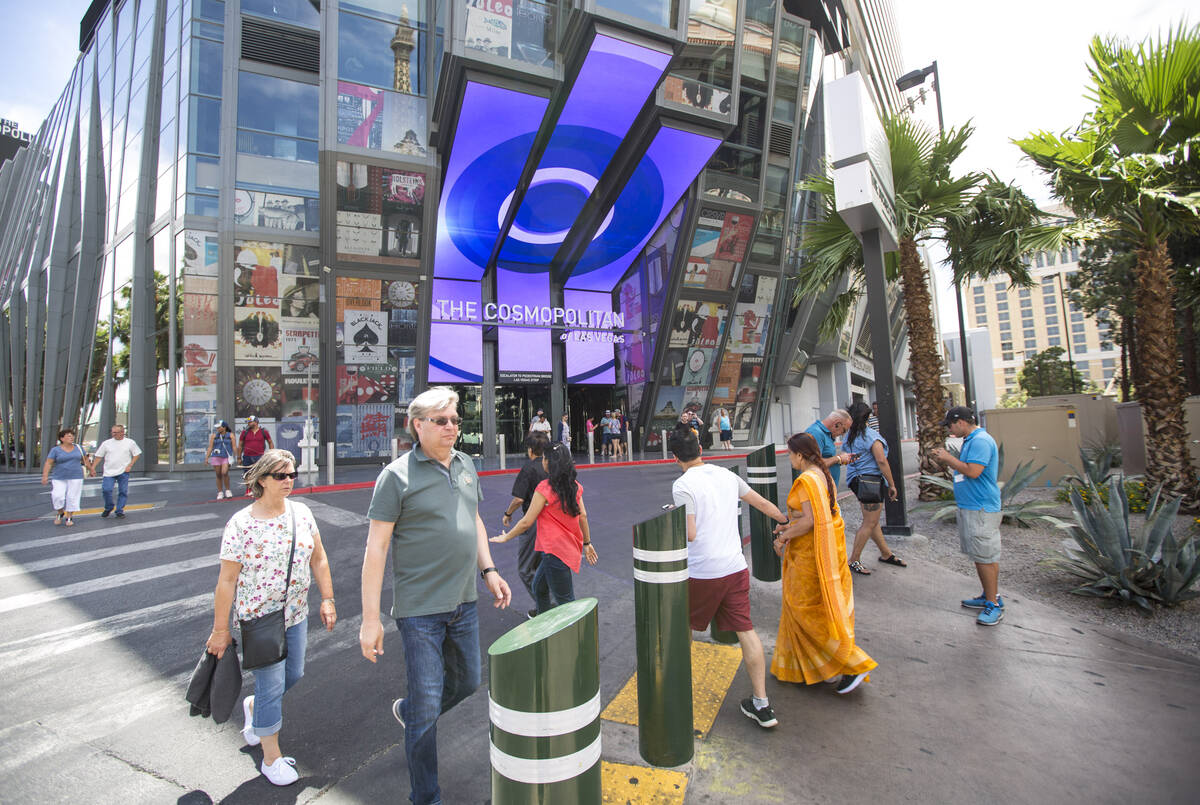 People walk outside The Cosmopolitan of Las Vegas on The Strip in 2018. (Las Vegas Review-Journal)

In past iterations of National Travel and Tourism Week, the city’s tourism leaders would educate the public about an aspect of the industry that continues to be Nevada’s economic driver.

This year, leaders are changing things up by thanking people.

“It’s really an opportunity nationwide for all the destinations to unite and remind everyone of the impact tourism has on our economy and gives us the opportunity to advocate for what’s important so our industry has the opportunity to expand and grow,” said Lori Nelson-Kraft, senior vice president of communications for the Las Vegas Convention and Visitors Authority.

“But this year, it held new meaning for us, especially on the heels of coming out of the pandemic with such a strong comeback for Southern Nevada,” she said. “So we thought it was more important to say thank you to two groups of people who truly make tourism happen here in Southern Nevada.”

The weeklong National Travel and Tourism Week observation ends Saturday, but efforts to draw more people to the city is an ongoing challenge.

The U.S. Travel Association in March reported annual travel spending of $95 billion is down 5 percent from prepandemic levels, a welcome improvement from the omicron variant-led 12 percent decline reported in January.

Today, travelers have even more to contemplate than COVID-19 — the impact of inflation and increased travel costs. The association said about six in 10 Americans are planning at least one summer trip, but nearly 63 percent say rising gasoline prices will impact their decision to travel in the next six months.

While visitation to Las Vegas has rebounded on weekends, especially on those centered around special events, midweek visitation continues to lag behind 2019 numbers. And, like most destinations nationwide, international arrivals continue to be a drag on overall totals.

Weekend occupancy rates in March exceeded 92 percent, up 14.4 points year-over-year and down just 5 points compared with March 2019, according to Kevin Bagger, vice president of the LVCVA research center.

While convention attendance is down, the number of meetings and trade shows coming to Las Vegas is up.

But attendance is down because individuals aren’t coming to shows as readily as they have in the past. Nelson-Kraft explained that much of it is a result of the decline in international travel, since many show attendees come from overseas.

Harry Reid International Airport reported that 4 million domestic passengers arrived and departed Las Vegas in March, a 60.3 percent increase over March 2021. On the international side, 154,404 passengers — just 3.6 percent of the total number of passengers — arrived and departed from the airport. But that number has some future promise because it’s 798.6 percent higher than the March 2021 figure the airport reported.

“Vegas recovered leisure visitation at a record rate, better than any other destination in the country and perhaps one of the quickest around the world,” Nelson-Kraft said. “There was a piece of pent-up demand, but at the end of the day, every visitor has a choice to make about where their vacation spot is and visitors have been choosing Las Vegas over other destinations. It shows in our leisure visitation numbers, so our first thanks of why this week matters is for the visitors who made the choice for Vegas.”

She also gave credit to the travel industry workforce.

“We are nothing without an incredible hospitality workforce,” she said. “The backbone of what makes Vegas so special is the extraordinary customer service, the understanding of creating memorable experiences for visitors. So when you combine these world-class resorts and these attractions, you can’t find anywhere else in the world, together with a workforce that truly understands how to deliver customer service, the thank you goes to the 265,000 hospitality workers, too.”