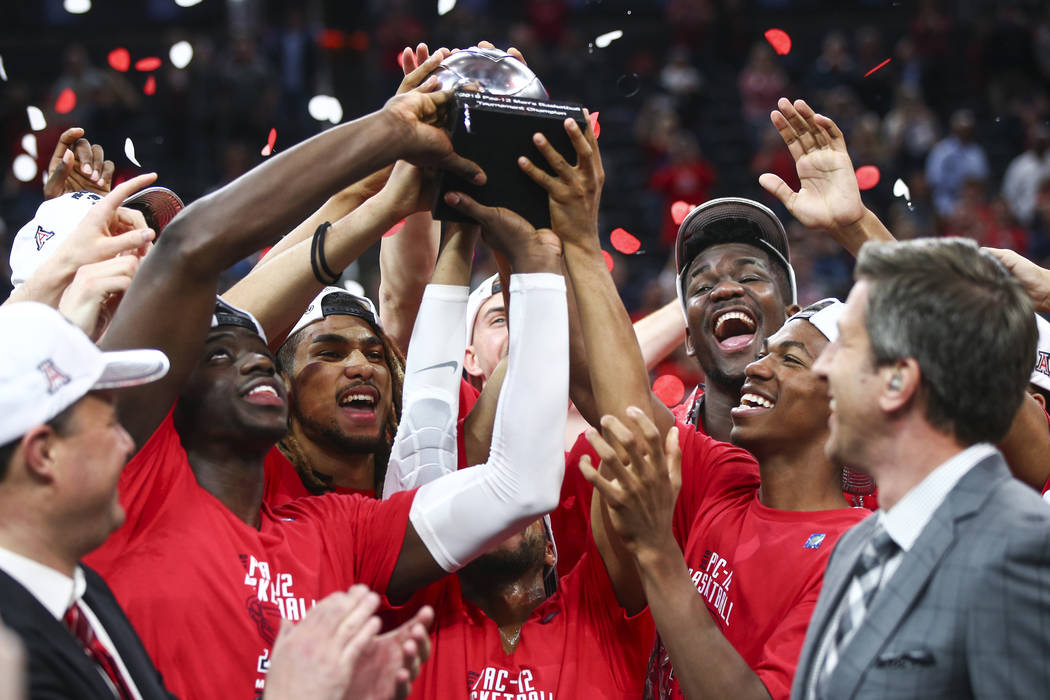 Arizona Wildcats players lift up their trophy after their defeat over the USC Trojans in the Pac-12 tournament championship basketball game at T-Mobile Arena in Las Vegas on Saturday, March 10, 2018. Chase Stevens Las Vegas Review-Journal @csstevensphoto

The Las Vegas Convention and Visitors Authority continued to invest in sports as a vehicle to bring visitors to Southern Nevada, unanimously authorizing $500,000 to fund an extension for promoting the Pac-12 men’s basketball tournament into 2020.

The board of directors on Tuesday approved the sponsorship of the four-day, single-elimination event at T-Mobile Arena that annually determines the conference’s representative in the NCAA Tournament.

The board was required to approve the Las Vegas Events-budgeted event because it commits funding beyond the current fiscal year. The 2020 tournament is scheduled for March 11-14.

The Pac-12 event has grown to become the best attended of four postseason college basketball tournaments in Las Vegas. The LVCVA and Las Vegas Events also have funding deals with the Mountain West and West Coast conferences. The Western Athletic Conference negotiates directly with Boyd Gaming, which hosts the tournament at Orleans Arena.

LVCVA CEO Rossi Ralenkotter said one of the agency’s goals is for Las Vegas to be an appealing site for NCAA first round, regional and Final Four play.

“The intent is to continue to have the tournaments in Las Vegas so there are negotiations going on all the time,” Ralenkotter said after Tuesday’s meeting.

The NCAA hasn’t embraced Las Vegas in the past despite having an abundance of hotel rooms to accommodate teams and fans because of the presence of legalized sports betting. That concern could evaporate next year if the U.S. Supreme Court strikes down or modifies the Professional and Amateur Sports Protection Act that bans sports wagering in all but four states since betting could become more commonplace nationwide.

The 65,000-seat Las Vegas stadium, when completed in 2020, is a possible location for a basketball Final Four. The NCAA usually chooses large stadiums for its four-team finale to the tournament. 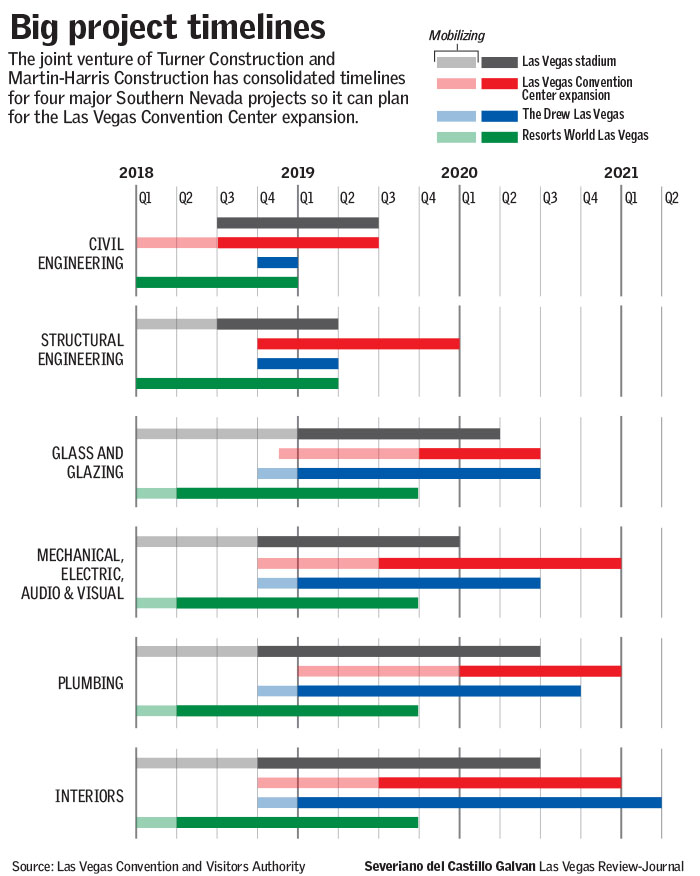 Ralenkotter said while the Pac-12 event is expected to attract 10,500 out-of-town visitors, mostly from West Coast cities, the value of the sponsorship is in the resulting media and television coverage at a time when college basketball fans are most interested in the sport.

In recent months, the LVCVA has placed a greater emphasis on sports in a bid to position the city as a home for various competitions just as it is recognized as the Entertainment Capital of the World. In recent weeks, the agency has promoted the first of two NASCAR races, USA Sevens rugby, the Vegas Golden Knights National Hockey League team, the Las Vegas Lights minor-league soccer team and UFC fights in addition to the four basketball tournaments. Next weekend, the city will host two Major League Baseball spring training games between the Chicago Cubs and the Cleveland Indians.

While board members voted unanimously without debate for the $500,000 sponsorship, the LVCVA has been criticized for big spending on sports, most notably for the $80 million naming-rights deal for Las Vegas Ballpark, the new minor-league baseball stadium being built for the Las Vegas 51s in Downtown Summerlin.

It’s believed to be the largest naming-rights deal ever done for a minor-league facility.

In other business Tuesday, the LVCVA board unanimously approved a $2.67 million construction management contract to a joint venture that includes a Las Vegas contractor.

The construction-manager-at-risk contract will go to a collaboration between New York-based Turner Construction and Martin-Harris Construction of Las Vegas.

The contract is for construction of a 600,000-square-foot exhibition hall, meeting rooms and support facilities totalling 1.4 million square feet to expand the Las Vegas Convention Center on land used as a parking lot northwest of the existing Convention Center.

The estimated $860 million project is part of the $1.4 billion expansion and renovation of the Convention Center to be completed by 2022. The new hall would open in time for CES in 2021.

The $2.67 million contract for pre-construction work also says the joint venture would be paid 2.8 percent of the guaranteed maximum price of the project which is being designed by a team of five collaborating architecture firms known as Design Las Vegas.

Ralenkotter said the maximum price, which is required before major construction work can begin, would be determined in the next four to six months.

A six-member committee recommended the Turner and Martin-Harris bid, which was affirmed by the chairman of the Oversight Panel for Convention Facilities in Clark County.

Reviewers were impressed that the Turner-Martin-Harris group is planning to schedule construction work that doesn’t conflict with when key craftsmen are needed on three other major Las Vegas projects — the Las Vegas stadium, Resorts World Las Vegas and the Drew Las Vegas renovation. The group also assessed working around times when the convention center campus is busy with large trade shows.

Tuesday’s meeting was the first for Las Vegas Councilwoman Michele Fiore, who replaced former Councilman Ricki Barlow on the board.