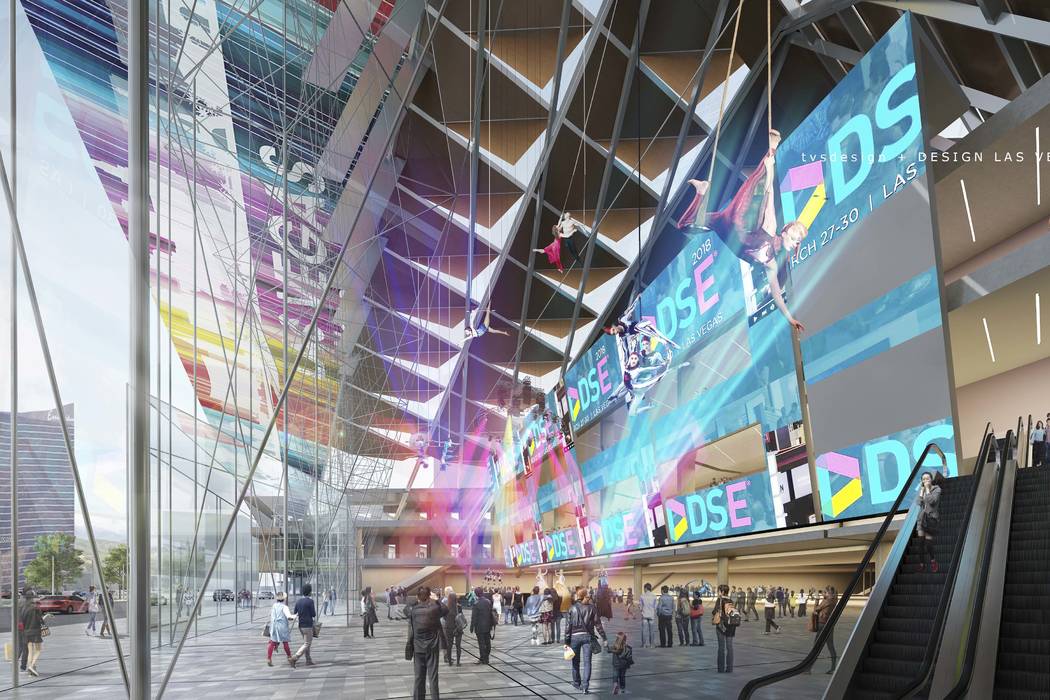 Monday was the Oakland Raiders’ day, with the team’s groundbreaking event for a $1.9 billion domed football stadium.

After recommendations from LVCVA staffers and a committee coordinating the $1.4 billion expansion and renovation of the convention center, the board approved Atlanta-based TVS Design, which collaborated with four Las Vegas-based architects and designers on the project.

The expansion project includes the development of a 600,000-square-foot exhibition hall within 1.4 million square feet of new space. That will enable the LVCVA to attract more conventions and trade shows, which usually fill hotel rooms in midweek periods.

The new space is expected to attract an additional 600,000 people to Southern Nevada each year. The expansion and renovation projects will provide an estimated 14,000 construction jobs and 7,800 new permanent full-time jobs.

The expansion is expected to be completed by the 2021 CES trade show. The renovation phase that will follow will be completed by 2023 and, when finished, will make the Las Vegas Convention Center the second-largest in North America, behind Chicago’s McCormick Place, at 3.2 million square feet.

“What gets us out of bed in the morning is doing big, complex projects that are important and have a meaningful impact on people’s lives,” said project executive and TVS Design principal Robert Svedberg. “The Las Vegas Convention Center expansion is just that: big, intricate and positioned to deliver a positive impact on many lives. We are thrilled about the opportunity to create an iconic design for the world’s greatest convention city.”

The approval authorizes President and CEO Rossi Ralenkotter to negotiate a contract with TVS that will be brought to the board at its Dec. 12 meeting.

The expansion side of the two-phase project will cost an estimated $860 million. Terry Jicinsky, the LVCVA’s senior vice president of operations, said the contract with TVS would be negotiated, but that the industry standard is for a contract amount of between 7 percent and 9 percent of the construction contract, or around $60 million to $77 million.

The cost of design services was not a part of the selection process to assure that the decision reached by a group of staff and expert evaluators and affirmed by the Las Vegas Convention Center District committee was based solely on the work.

The LVCVA is bound by Nevada administrative code on the matter.

“An architect, interior designer or residential designer who holds a certificate of registration shall not submit any information to the state of Nevada or any of its political subdivisions as part of a proposal for a publicly funded project which would enable the public agency to evaluate the proposal on any basis other than the competence and qualifications of the registrant to perform the type of services required,” the code says.

The two design teams that finished second and third in the competition, RV Architecture of New York and Kansas City-based Populous, were given $250,000 each for their efforts and the LVCVA will retain their intellectual property. It remains to be seen whether TVS will incorporate any of their ideas in the final design.

The financing of the convention center expansion and renovation was authorized in the same legislation that provided $750 million in public funds for the Las Vegas stadium project. A 0.5 percentage-point increase in Clark County’s hotel room tax was approved in legislation for the convention center authorized in a special session in October 2016 and added a piece of financing to the package that will fund the expansion and renovation project.