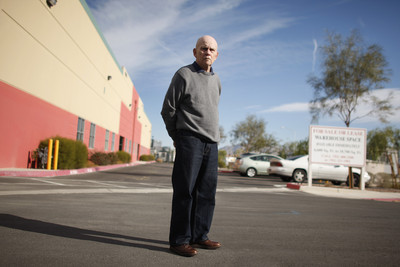 One man is living out of his van in California, not a bad life for a kid surfer — but probably not how he wanted to retire in his 70s.

Another had to go back to work at age 83. Others have moved in with their children. A Miami doctor lost $3 million. One woman committed suicide.

These are among countless stories from some 6,000 people who put money in USA Capital trust deeds with promises of double-digit returns, only to end up losing it all when the Las Vegas investment firm filed for bankruptcy in 2006.

Gary Larson, a retired business executive in Mesquite, invested most of his $650,000 retirement fund in USA Capital and is now trying to sell his home to cover living expenses for him and his wife.

He’s on a fervent mission to expose what he sees as “cronyism and corruption” in a court system that has failed to adequately protect the little guys.

“None of this had to happen if the courts would have been fair and done their due diligence,” Larson said. “Many of us are veterans of World War II and the Korean War. We owned businesses and are college-educated. I think we deserve more respect and consideration from the court system.”

Larson thinks the court made its first mistake by awarding USA Capital’s portfolio to Compass Partners, a private equity group from New York. Compass paid $67 million for the right to service the loans and for assets of certain funds.

The company stated it would operate a loan service business in Nevada but later withdrew its application for a license, closed a temporary office in Las Vegas and moved back to New York.

Silar Advisors notified the federal court in October that it foreclosed on the mortgage interests and servicing rights that Compass held. Silar Advisors also said it created an affiliate named Asset Resolution and gave responsibility for servicing the loans to Windemere Capital.

Larson called it a “camouflage” for Compass’ real intention, which was to take advantage of investors. That’s why he’s urging District Court Judge Robert Jones to reject a proposed $86 million settlement agreement in a hearing scheduled for Jan. 20.

Larson said investors overwhelmingly rejected the settlement, but he said the deal is being “crammed down our throats” by receiver Tom Grimmett and attorney Terry Coffing, whom Jones appointed to represent investors.

The receiver plans to submit a revised agreement to the judge that lenders have not been afforded the right to review, Morley Marston posted on LLCReceiver.com, a blog site for the case.

“It appears that the receiver’s modus operandi for another cram-down is definitely his game plan,” Marston wrote.

USA Capital, owned by Joe Milanowski and Tom Hantges, was handling $962 million in assets when it collapsed in April 2006. That money belongs to investors, not the state or Compass, Larson contends.

“The courts have failed to realize this fact, or have ignored it, in their decisions thus far,” he said.

Darlene Hammond, a certified public accountant with a master’s of business administration degree in finance, said she was retired for 10 years in Las Vegas and now has to find a job, not only because of the money she lost to USA Capital, but because of the entire economy.

“What really sticks in my craw right now is the way we’ve been passed from one piranha representative to another,” she said. “This is called legal abuse syndrome. We know we have no power here.”

Hammond wants the judge to deny the settlement agreement, terminate Compass and get rid of the receiver. A committee of three to five direct lenders should be formed to give opinions on any decisions going forward, she said.

Investors tried to form limited liability companies to protect their interests. Their leader, Donna Cangelosi, was “vilified” by the court and can no longer communicate with investors, Larson said.

Cangelosi, whose investment group put $8 million into USA Capital, felt Compass had mishandled money, failed to communicate with investors and did not comply with its fiduciary duties.

“The judge has handcuffed us to these people while our assets sit there rotting,” Cangelosi told the Review-Journal from Reno. “He will not let us terminate them.”

Judge Jones ruled that Cangelosi had violated securities laws by soliciting investors to assign their assets to the LLCs.

“We followed due process of law under an attorney and in the eyes of the court,” Cangelosi said. “There’s no vigilante justice going on here. We filed a complaint and all the judge has done is find excuses and reasons not to allow us our day in court.

“This judge has one goal and one goal only and that is to protect the lower court, the bankruptcy court, which made horrendous errors,” she said. “They allowed the loan service to be sold to a shell company with intent to defraud the lenders.”

Cangelosi said no complaints were filed against her and that the judge can’t rule from the bench on securities violations without due process.

“She did not hold a gun to our heads,” Larson added. “The real villain in this is Compass Partners. They now have an opportunity to charge whatever they want in fees on each loan and have no accountability to the investors.”

Real estate values have dropped considerably and some of USA Capital’s deeds are worth less than half of their original investment value. The settlement offer does not account for that, Larson said. If it’s approved, along with administrative and legal expenses, there will be nothing left for investors, he said.

“Our ultimate goal is to get with a workout company that’s honest and hold onto the property until the economy rebounds,” Hammond said.

The Fertitta family, founder of Station Casinos in Las Vegas, had $17 million invested in USA Capital and got it all back when one of their attorneys was on the oversight committee, Larson said. The attorney then resigned from the committee.

Anthony Zerbo, a 76-year-old from San Jose, Calif., invested about $900,000 in USA Capital over six years after seeing an advertisement in a financial publication.

“When you’re rolling it over and it’s doing good … you think first deeds of trust, you can’t go wrong,” Zerbo said. “Toward the end, things weren’t going good and we tried to pull back our loans and it wasn’t there.”