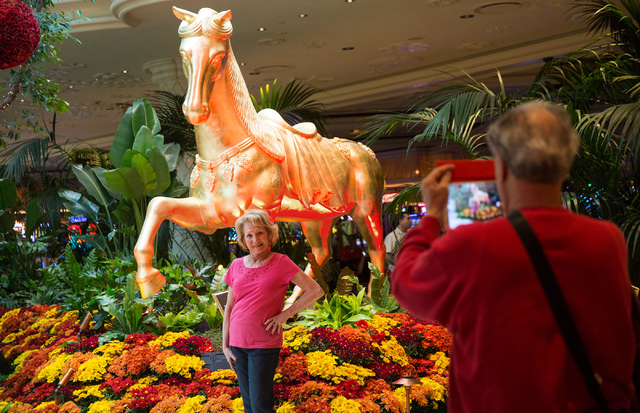 Barbara Simon has her photo taken by her husband, Jay, while vacationing on their 48th anniversary at the Wynn on Thursday, Jan. 30, 2014. (Samantha Clemens/Las Vegas Review-Journal)

Wynn Resorts Ltd., the casino company that expects to open its Wynn Palace resort on Macau’s Cotai Strip during the first half of 2016, reported fourth-quarter earnings Thursday that easily beat analyst expectations. And the company’s revenues from its two Macau casinos increased by double-digits.

Profit rose to $2.27 per share, excluding items, compared with $1.17 last year and the $1.74 average of analysts surveyed by Yahoo Finance. Revenue gained 18 percent to $1.51 billion, the Las Vegas-based gaming company said in a statement Thursday.

“The numbers as usual speak for themselves,” Steve Wynn, chairman and CEO of Wynn Resorts, told analysts in a conference call. “Our $1.8 billion in cash flow is very satisfying.”

“We are very pleased with Las Vegas … nobody was close,” Wynn said. “It’s the same story in China. We are very happy with our position in the market.”

Wynn Resorts’ profitable quarter and year come as it builds its second resort in China and awaits a final decision on its license application in Massachusetts. If selected, the company plans to invest $1.5 billion in Everett, just outside of Boston.

“We believe that the opportunity to build in Boston is a really fine business opportunity under the right circumstances,” Wynn said. During the hourlong conference call, Wynn said his casino project was superior to the one proposed by Mohegan Sun and Suffolk Downs.

“We are feeling pretty confident that we will be successful,” Wynn said. “We invest $1.5 billion … borrowing $1 billion and putting up $500 million. We expect to make $300 million of equity on Massachusetts.”

Wynn described Boston as a “destination city for people from around the world.” He said given the Wynn brand that property will have a “tremendous edge” over every casino and hotel on the East Coast.

Wynn Palace, which is currently under construction in Cotai, is on schedule to open in 22 or 23 months, the company said. During the fourth quarter, Wynn Resorts invested approximately $184.9 million in Cotai, taking the total investment to date to $704 million.

Wynn told analysts the company is already planning phase two of the project and more information and renderings will be released in quarterly reports throughout 2014. He said Cotai represents the best efforts of everyone.

Wynn said the properties in Macau will not become “a stepchild” to Cotai. He said the company continues to reinvest and upgrade its Wynn Macau and Encore properties, but a completed Wynn Palace will represent an $8 billion to $9 billion investment.

“We do not intend to give up any ground against any of our competitors,” Wynn said. “That’s a big priority for us.”

Wynn Resorts continued to benefit from increased business from non-VIP players in Macau, who left 34.6 percent more cash on the tables in the fourth quarter. Table games win in the mass-market segment was $292.9 million.

“2014 is going to be a good year, equal to that of 2013,” Wynn said. “We are noticing an uptick in convention bookings and improvement in retail, room revenues and rates. I’m not claiming Las Vegas is booming … 2014 will be fine.”

Wynn said his company was “feeling the impact of the Affordable Health Care Act,” and will “struggle to overcome it” as well as some other regulations passed by Congress.

“Nothing that has come out of Washington has done anything but add to our operating expenses,” Wynn told analysts. He reminded those participating in the conference call that were it not for the company’s foreign investment, “our Las Vegas properties would not look like they do.”

Wynn also stressed “Las Vegas has been the beneficiary of Macau in terms of employment and capital investment.” He said his success in Macau allowed them to build Encore on the Strip.