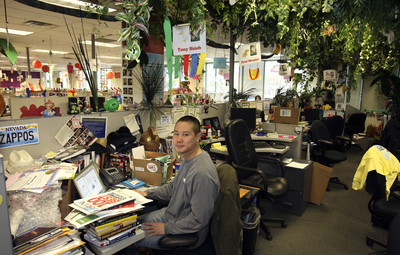 Just to have a job these days is a pretty big thing for a lot of people. But to be working at the 23rd most employee-friendly company in the country is something else.

That’s how employees at Henderson-based Zappos.com feel, at least.

The online shoe and clothing retailer was No. 23 on Fortune magazine’s “100 Best Companies to Work For” list. The ranking makes Zappos the highest-ranked newcomer ever on the annual list.

“It’s not just a job, and that’s something we all believe,” 28-year-old Rob Siefker said about the style of culture that has helped Zappos and its workers thrive. “We’re creating a brand that has gone from a small company into joining Fortune’s 100. When I started that was a goal, and to get it in such a short amount of time is crazy.”

Station Casinos, which had been a mainstay on the list for the past four years, fell off the list this year after finishing 33rd last year.

Zappos Chief Executive Officer Tony Hsieh, one of the few workers to have a title, is confident the company has the right kind of culture to be around in the marketplace — and on the list — for a while.

“We believe that a company’s culture and a company’s brand are really just two sides of the same coin. If you get the culture right, then most of the other stuff will happen on its own,” the 34-year-old Hsieh, a former venture capitalist and an original investor in Zappos, said.

Siefker, who joined Zappos.com as a temporary hire in San Francisco five years ago, said everyone is encouraged to share their ideas about how to improve the company’s culture and business. They also spend time together outside the office.

Some of that time is spent at company events like tonight’s holiday party at Studio 54 at the MGM Grand. The party is happening tonight because workers were too busy during December to have a celebration.

For Eileen Lewis, who has worked at Zappos.com for seven years, her job managing fashion merchandise has taken her all over Europe seeking the latest trends.

“We get to play hard as well as work hard,” said Lewis, who joined the company when it had 25 employees. “I’m able to travel around the world and see all the trends and what’s going on, so there’s a lot of perks. But we’re able to get a lot of work done and focus.”

At the Henderson office, which employs half of the company’s 1,400 workers, employees’ cubicles are extravagantly decorated to reflect each person’s character based on their department’s particular theme. The rest of the staff works at the company’s distribution center outside Louisville, Ky.

Although the company’s corporate operations happen at the corporate offices, not a business suit, tie or dress was seen in the building.

Hsieh believes maintaining the company’s culture is important, an idea echoed by other employees.

“We figure if you get the culture right, good stuff tends to happen naturally,” said Aaron Magness, who works on Zappos.com’s business development projects. “Part of the interview process, what can be more important than ‘Can you do the job’ is ‘Are you going to be the right culture fit?’ “

For those applicants who do fit, the company offers some nice benefits, including fully paid medical and dental plans for workers, a break room with free food and drinks — the vending machine is 25 cents and the money goes to the Nevada Childhood Cancer Foundation.

Another perk: a nap room, which was occupied Friday morning.

Zappos’ culture and work atmosphere appears to be good for the company’s bottom line.

Down a hallway at the company’s executive offices in Henderson is a row of framed T-shirts that are produced and handed out to all employees whenever the company hits single-day sales records.

The company, which started in San Francisco in 1999, hit its goal of $1 billion in gross merchandise sales in a year on Dec. 30, two years ahead of schedule.

Station Casinos’ fall from the Fortune list comes as the local gaming company has been slashing costs and jobs and taking other not-so-employee-friendly steps such as its December decision to suspend matching 401(k) payments.

The company, which was taken private by its owners and the investment firm Colony Capital in late 2007, like other gaming companies have been hit by declining revenues as the economy skidded.

In the past, Station touted its placement on the Fortune list in ads and in employment drives since it made its debut on the list at No. 54 in 2005.

The Fortune list, which will be published in the magazine’s Feb. 2 issue, was complied by the Great Place to Work Institute in San Francisco, and is based on employees’ opinions and an evaluation of the policies and culture of each company.