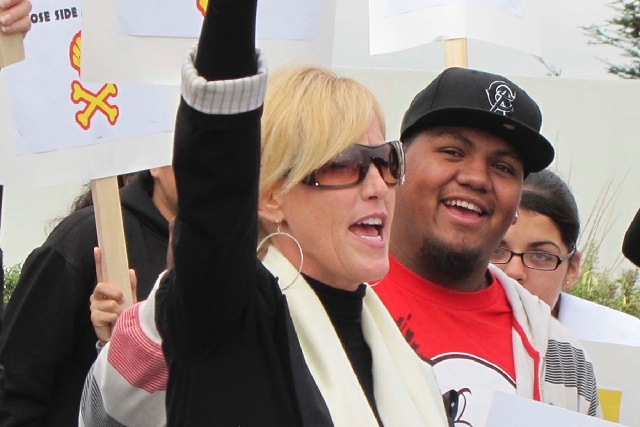 Activist Erin Brockovich, seen during a 2011 protest, was arrested for boating while intoxicated at Lake Mead Friday.

Erin Brockovich-Ellis, a consumer and legal advocate who came to fame in 2000 when Julia Roberts played her in a movie about her life, was arrested for boating while intoxicated at Lake Mead Friday, Lake Mead officials confirmed Saturday.

Brockovich-Ellis, 52, of Agoura Hills, Calif., was booked into Clark County jail immediately after the 10:15 p.m. bust, said Edwin Lyngar, a spokesman for the Nevada Department of Widlife.

Lyngar said that the game warden, Casen Haslem, noticed that Brockovich-Ellis was “struggling” while she docked her boat at the Las Vegas Boat Harbor, the closest marina to Boulder City.

Haslem reported that Brockovich-Ellis was unable to moor the motor boat on her own and that she needed assistance from Haslem after he threw her a rope. When he got closer to Brockovich-Ellis to help her, it was then that he detected several signs of intoxication, including slurred speech.

“She was obviously struggling to put the boat in the slip, and if you’ve had any experience, it’s a simple enough operation,” said Lyngar.

He then conducted a field sobriety test, which indicated that she was “significantly” above the .08 the legal threshold.

Brockovich-Ellis was released from jail after posting $1,000 bail.