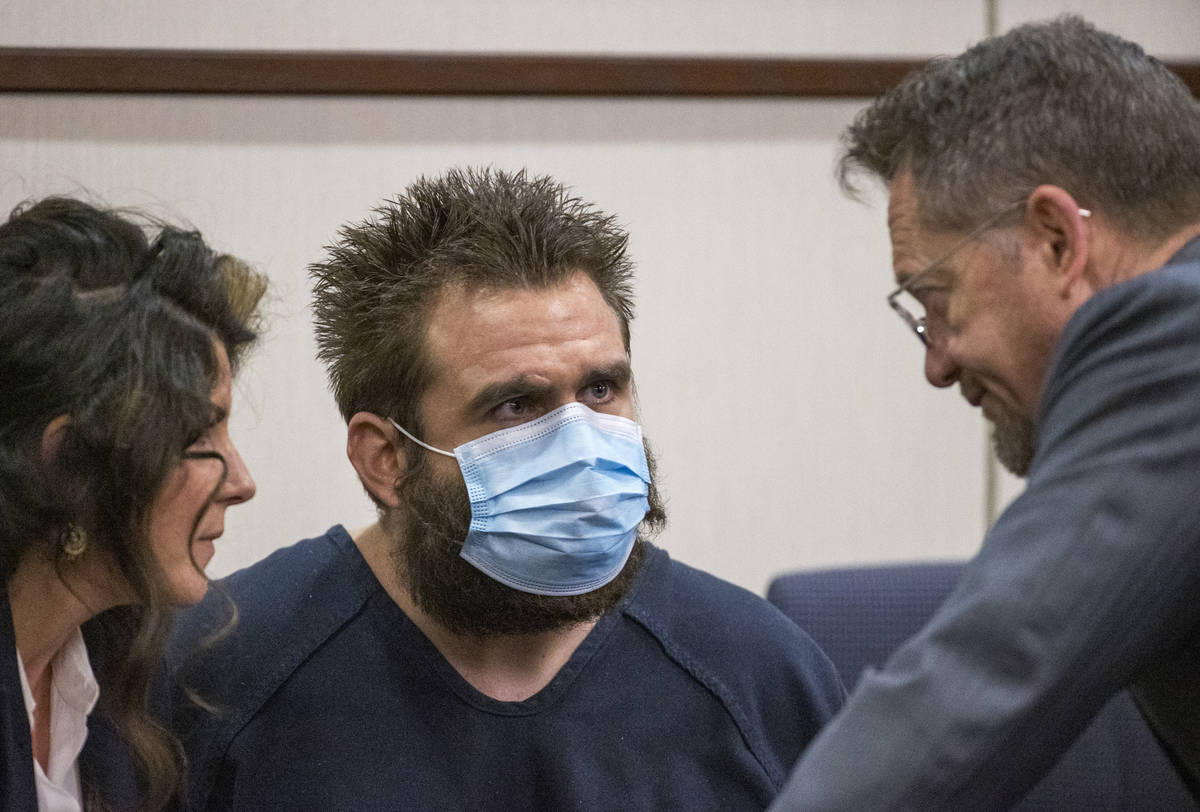 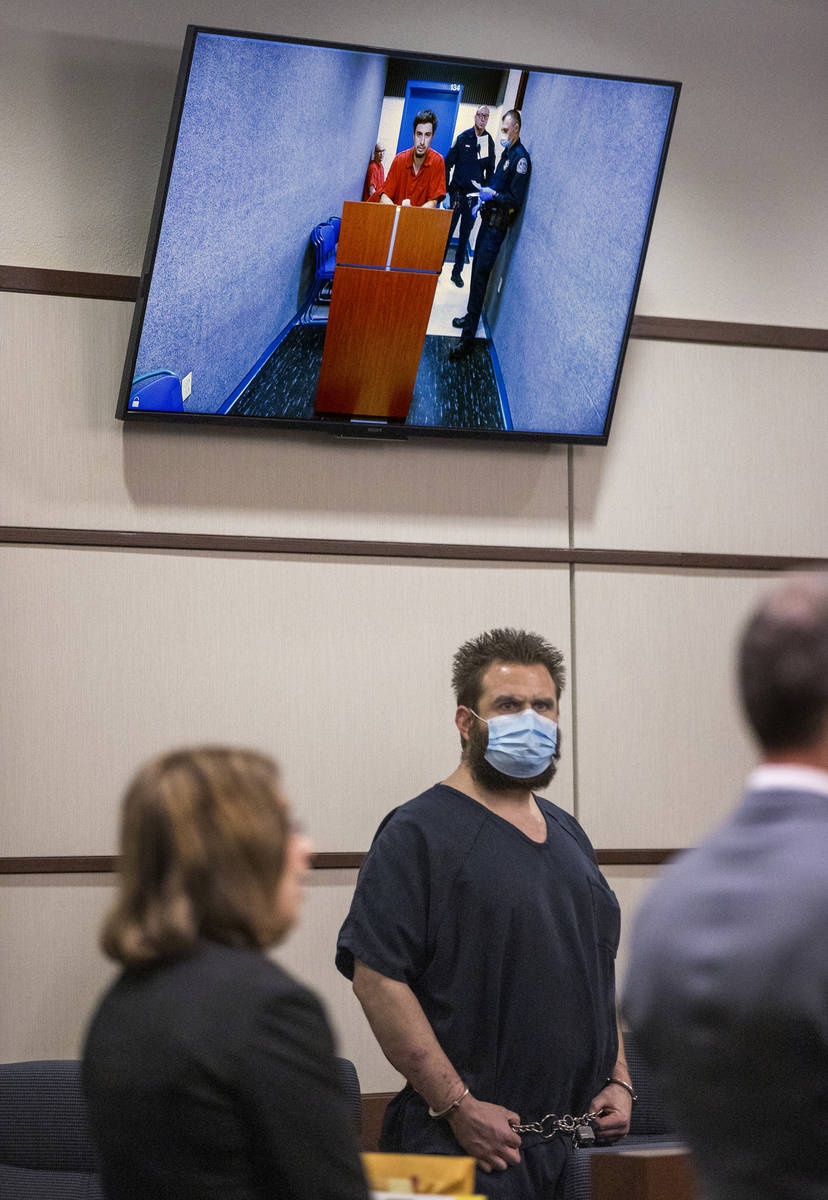 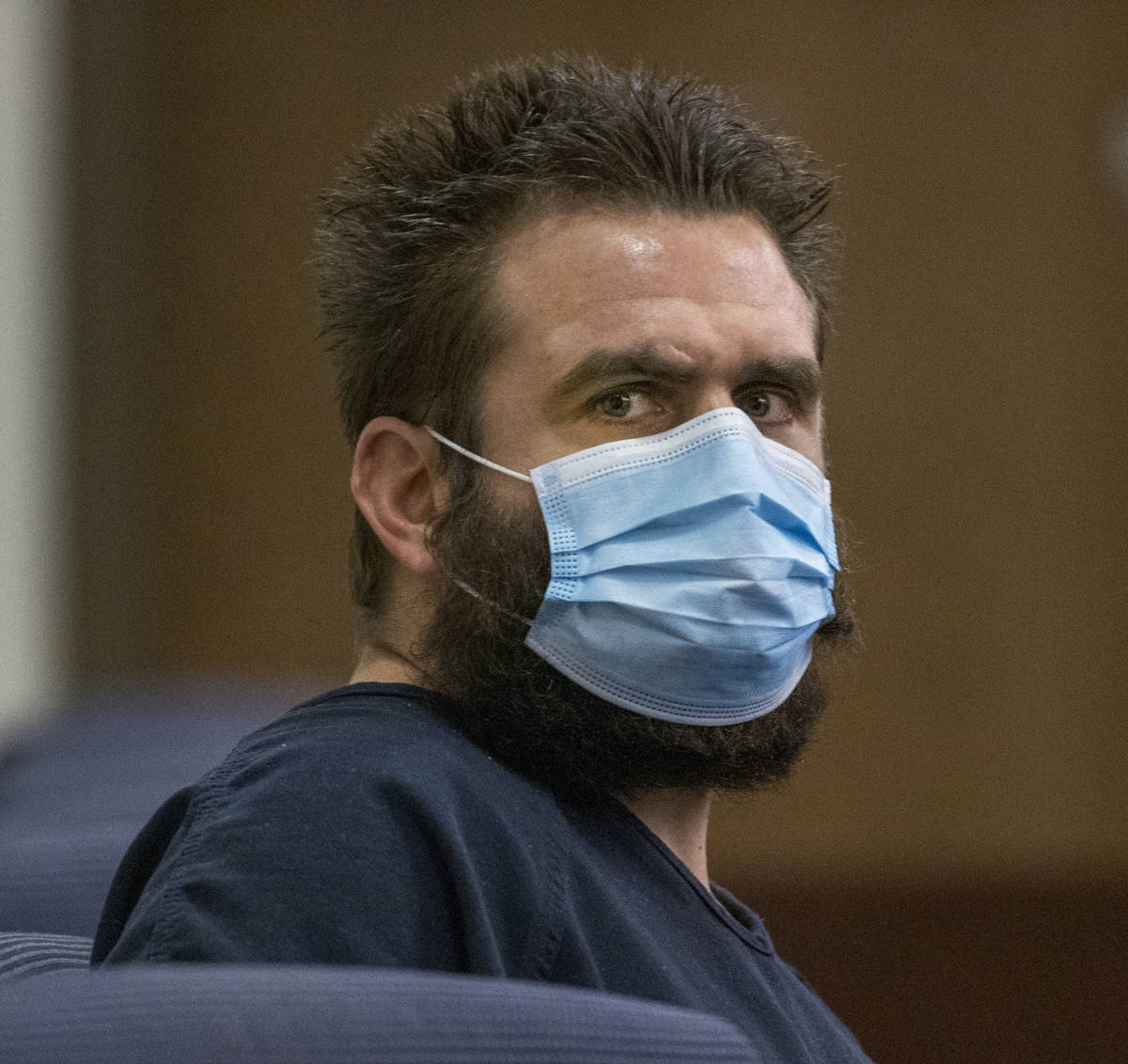 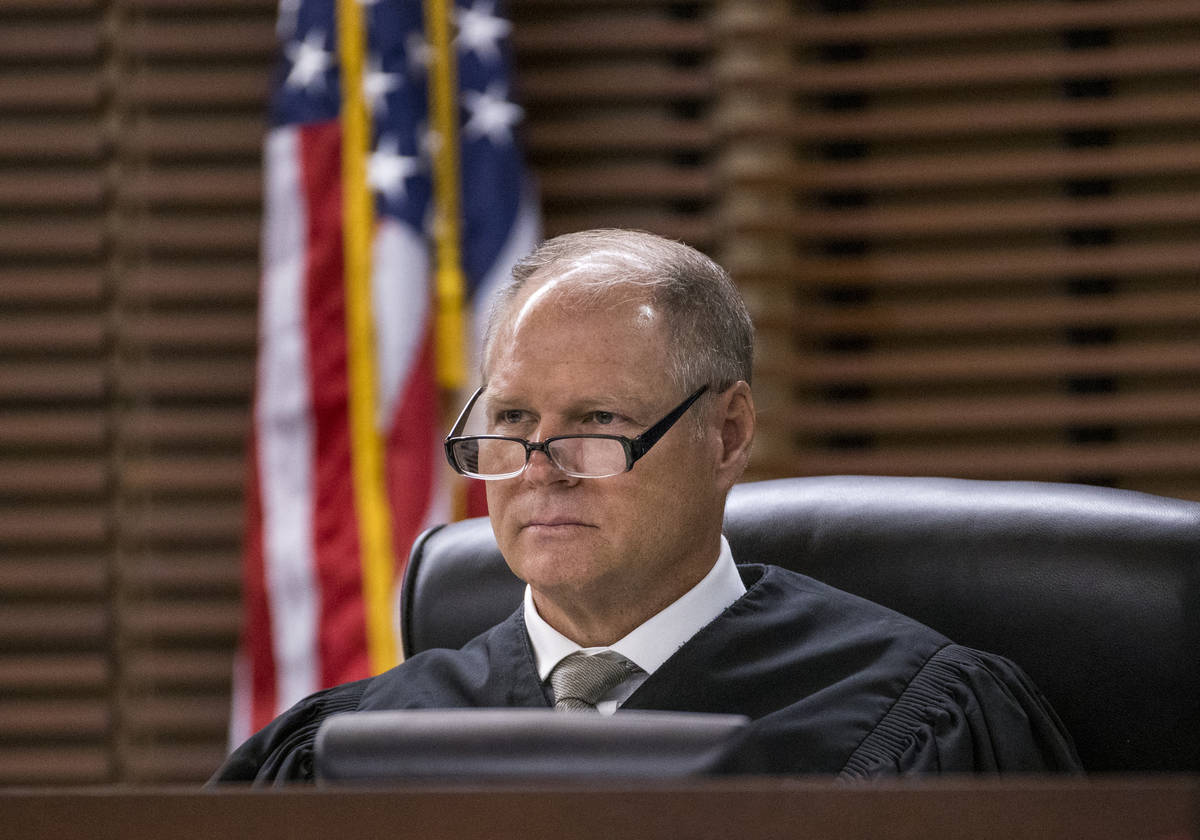 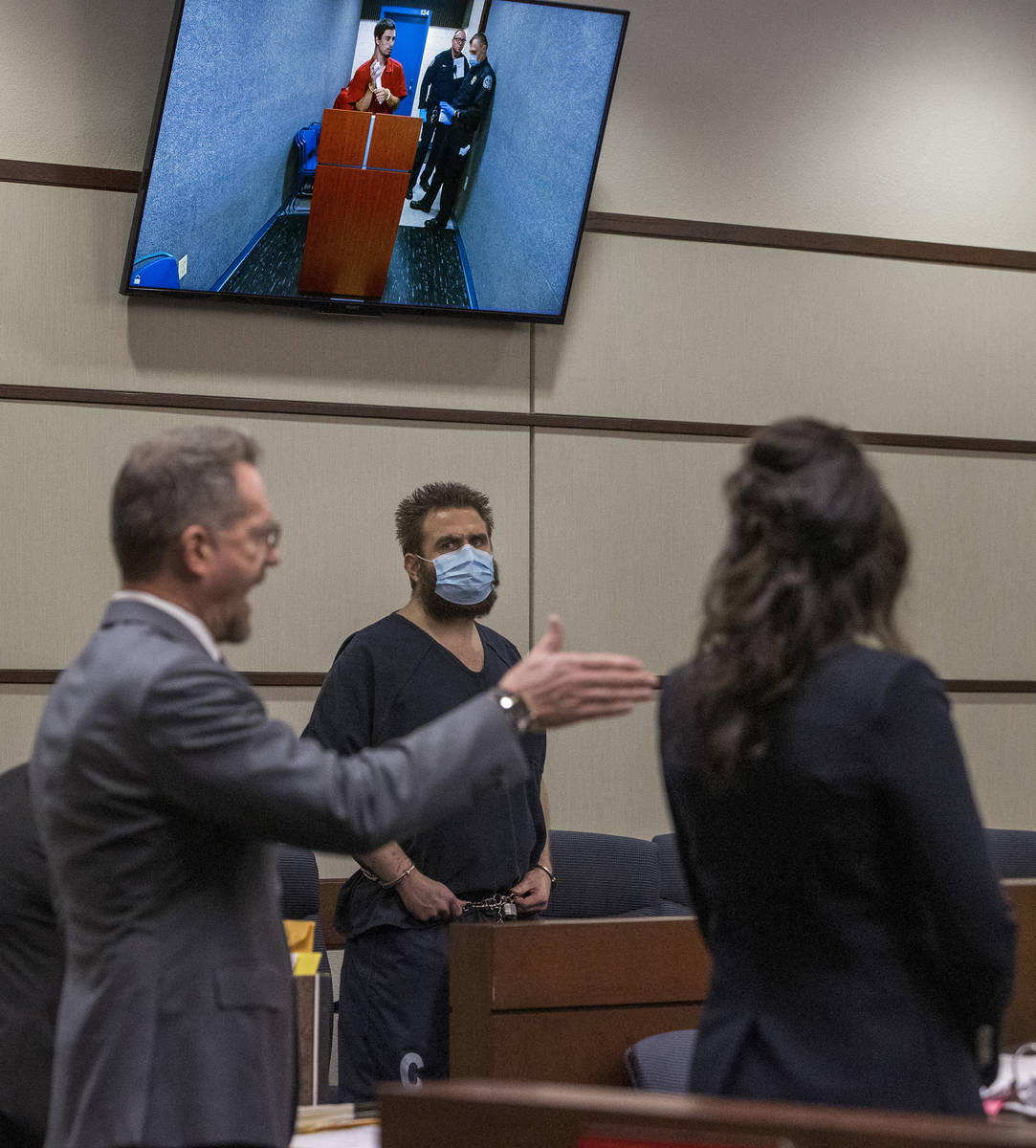 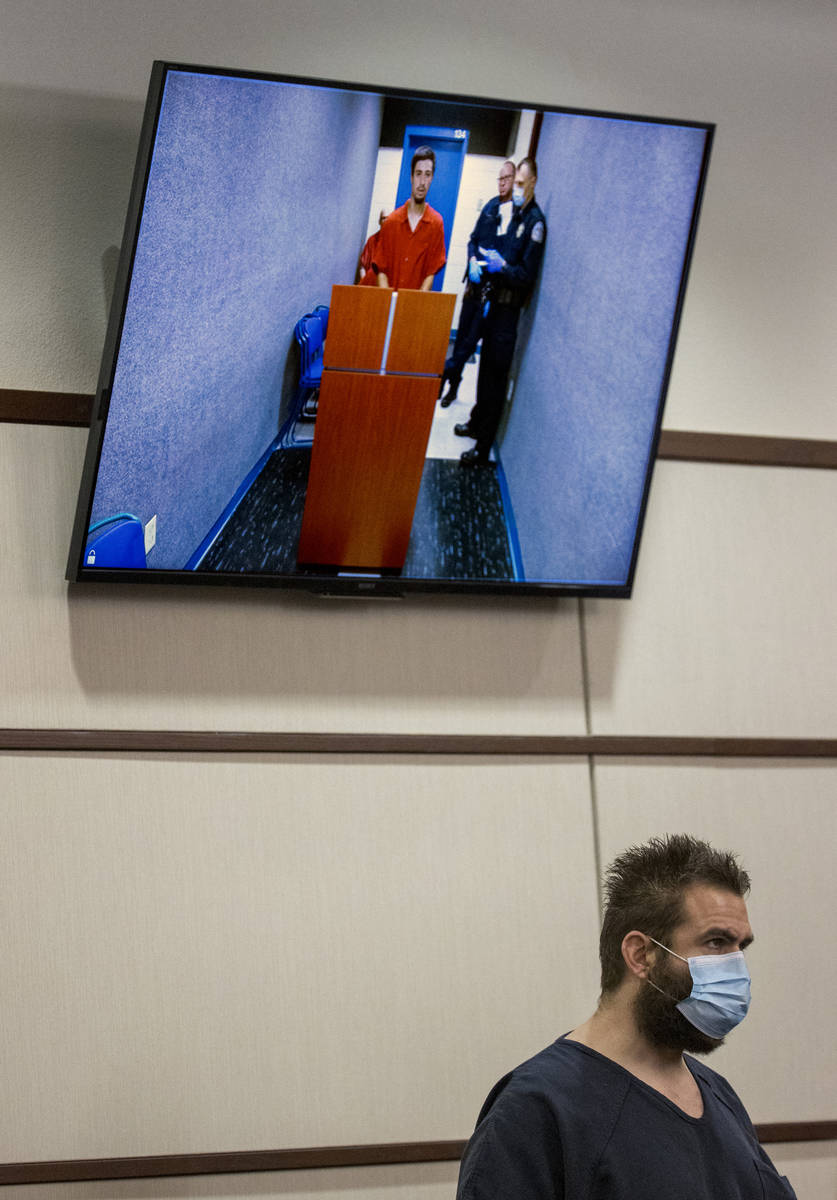 Joshua Nichols, below, appears with co-defendant George Moya on video feed, above, during their hearing at Henderson Justice Court on Wednesday, April 22, 2020 in Las Vegas. Nichols is the son of Oklahoma City bomber Terry Nichols. (L.E. Baskow/Las Vegas Review-Journal) @Left_Eye_Images 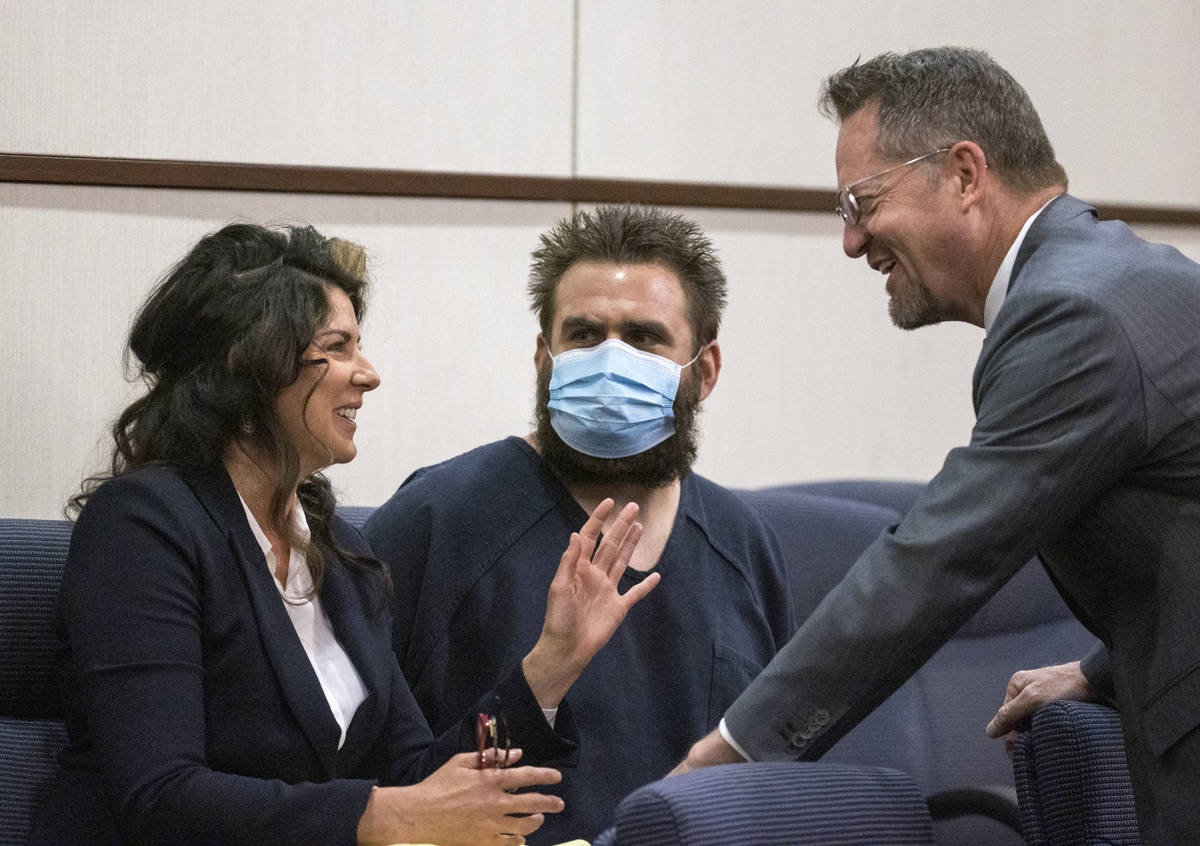 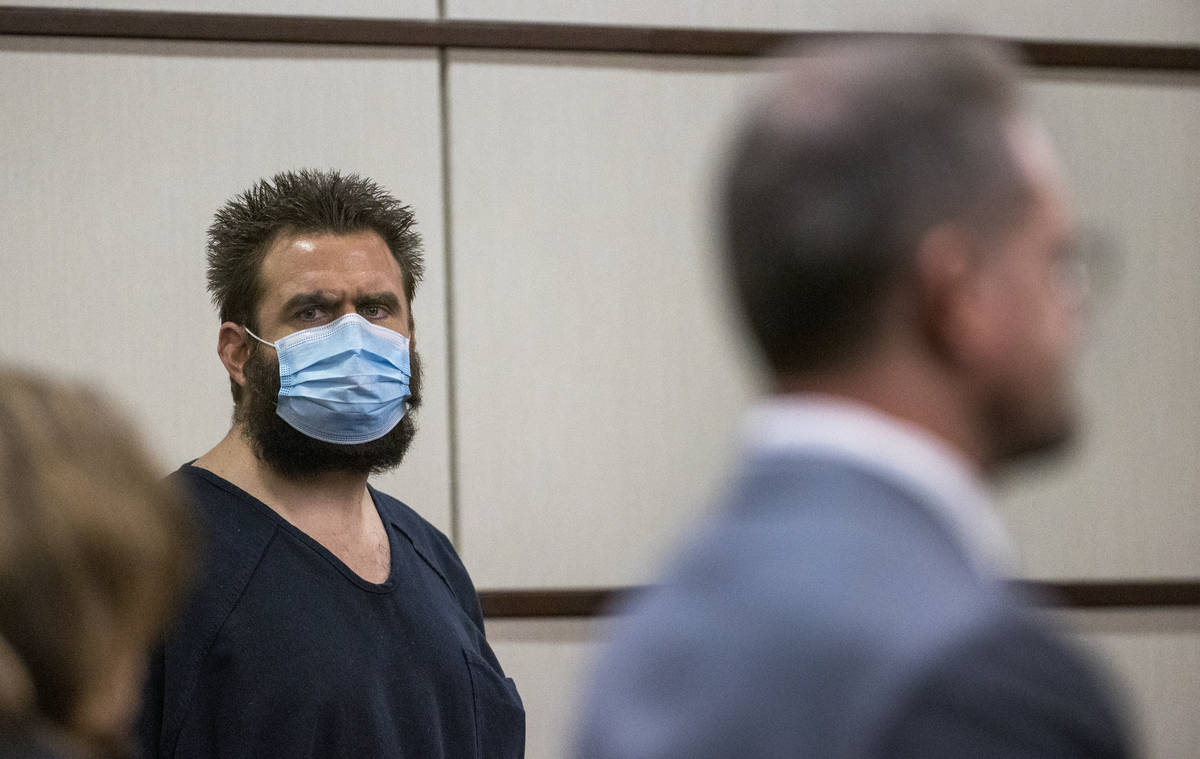 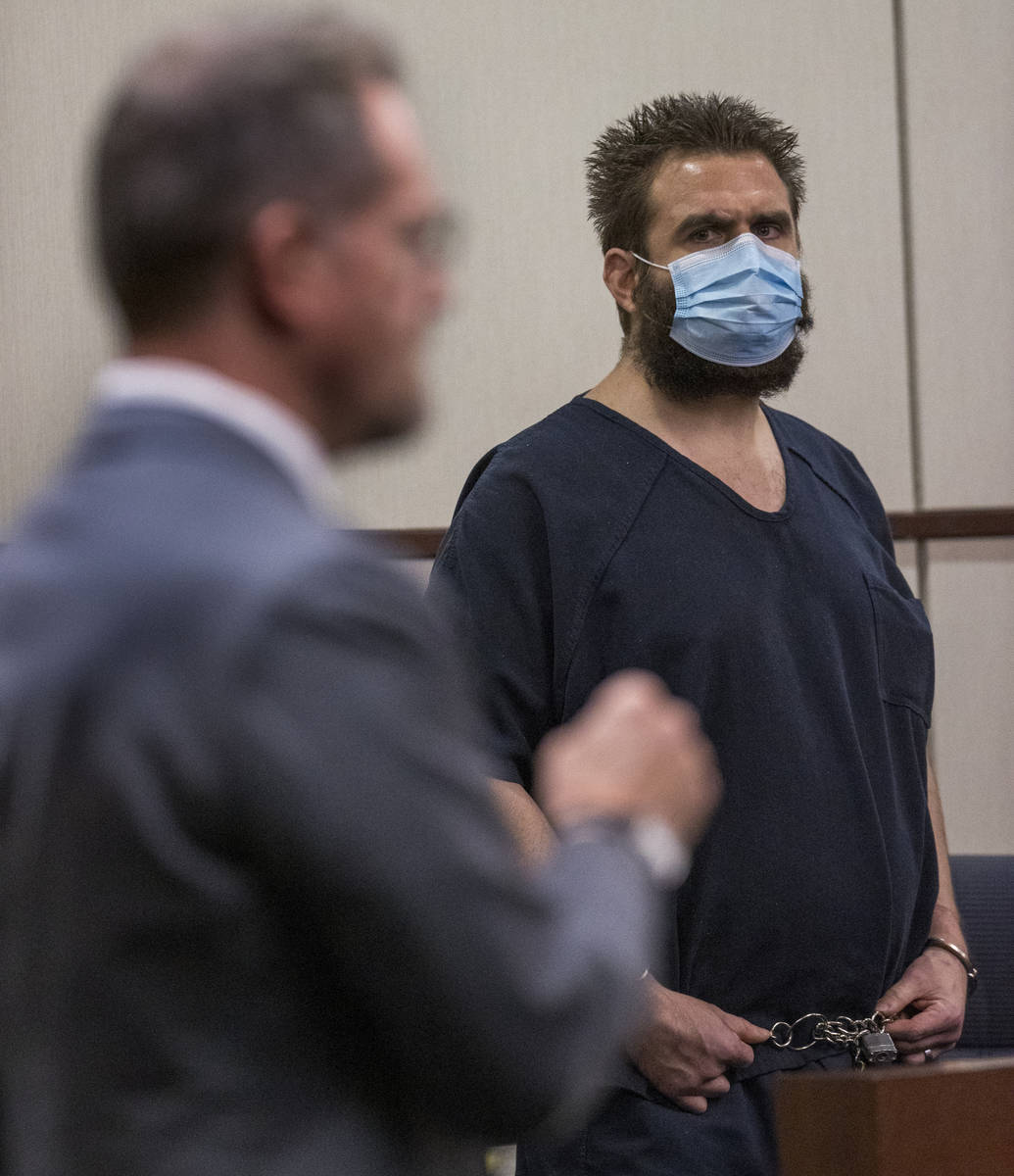 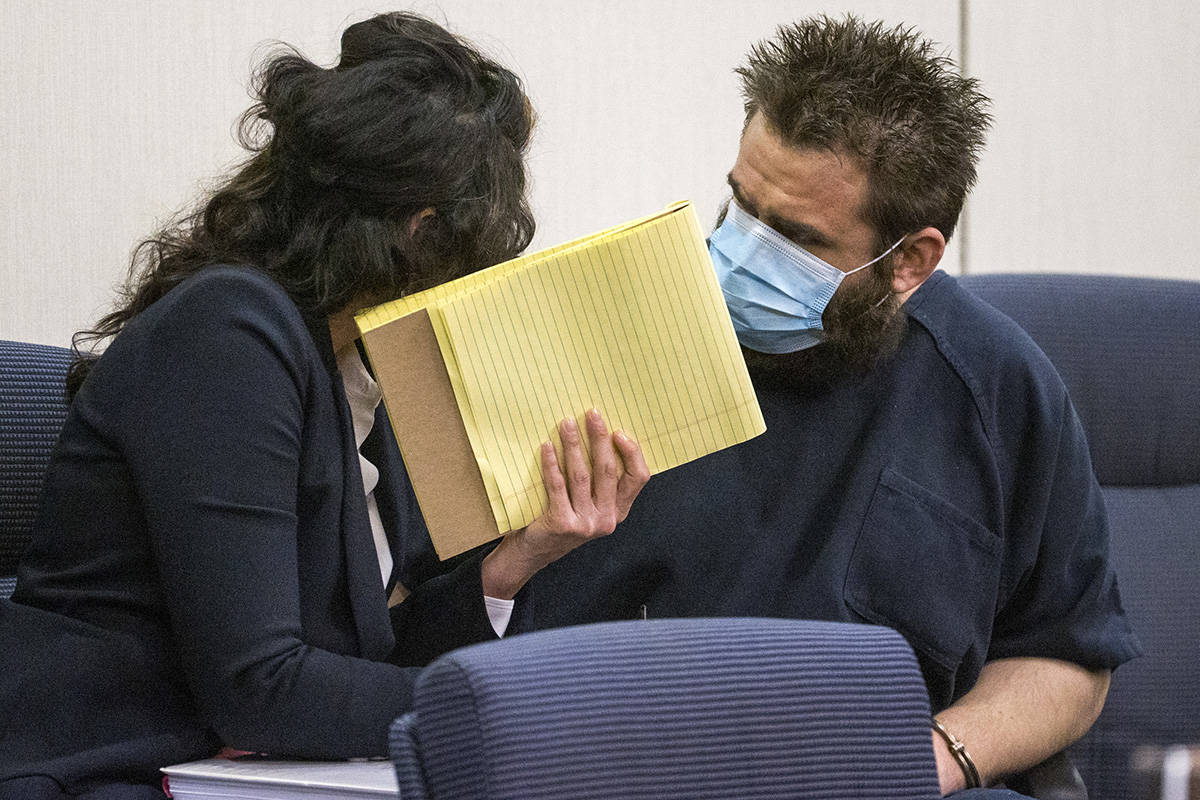 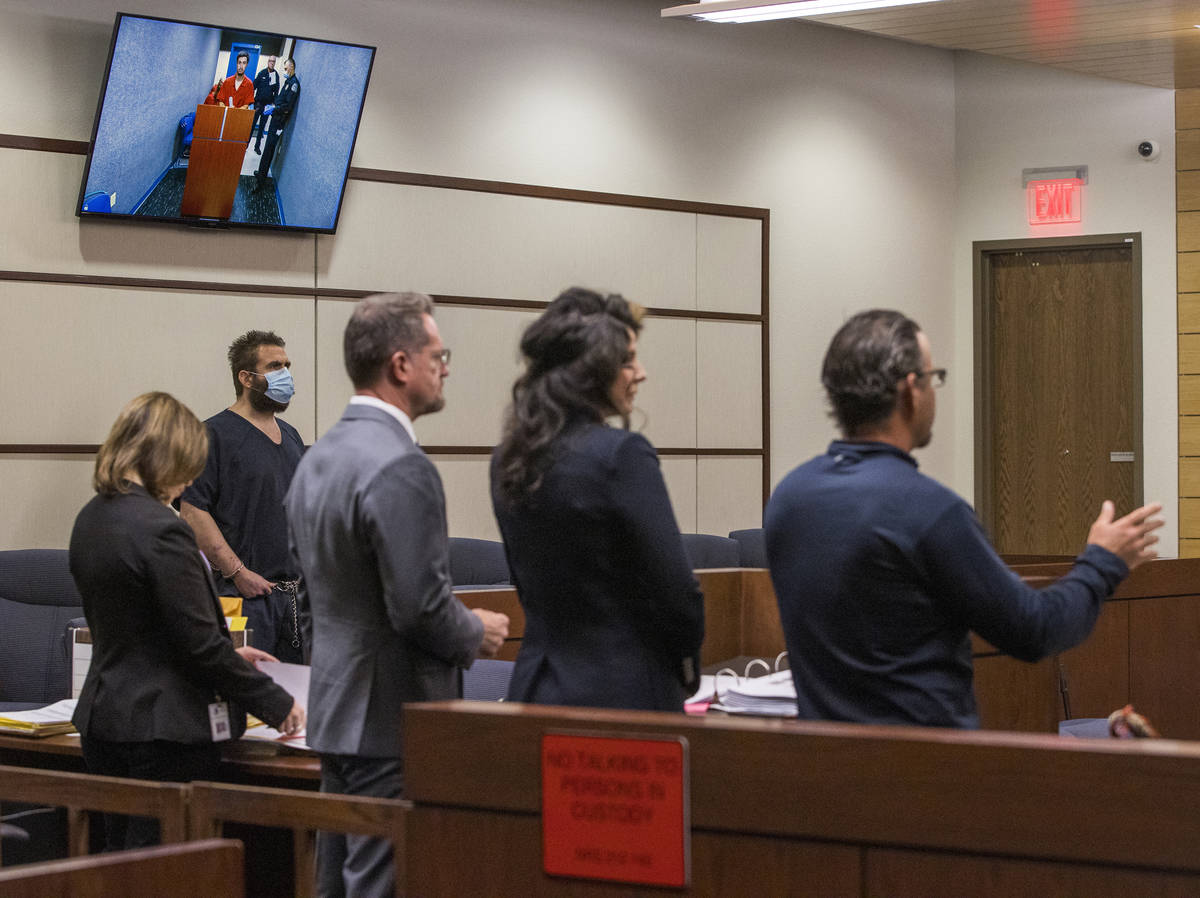 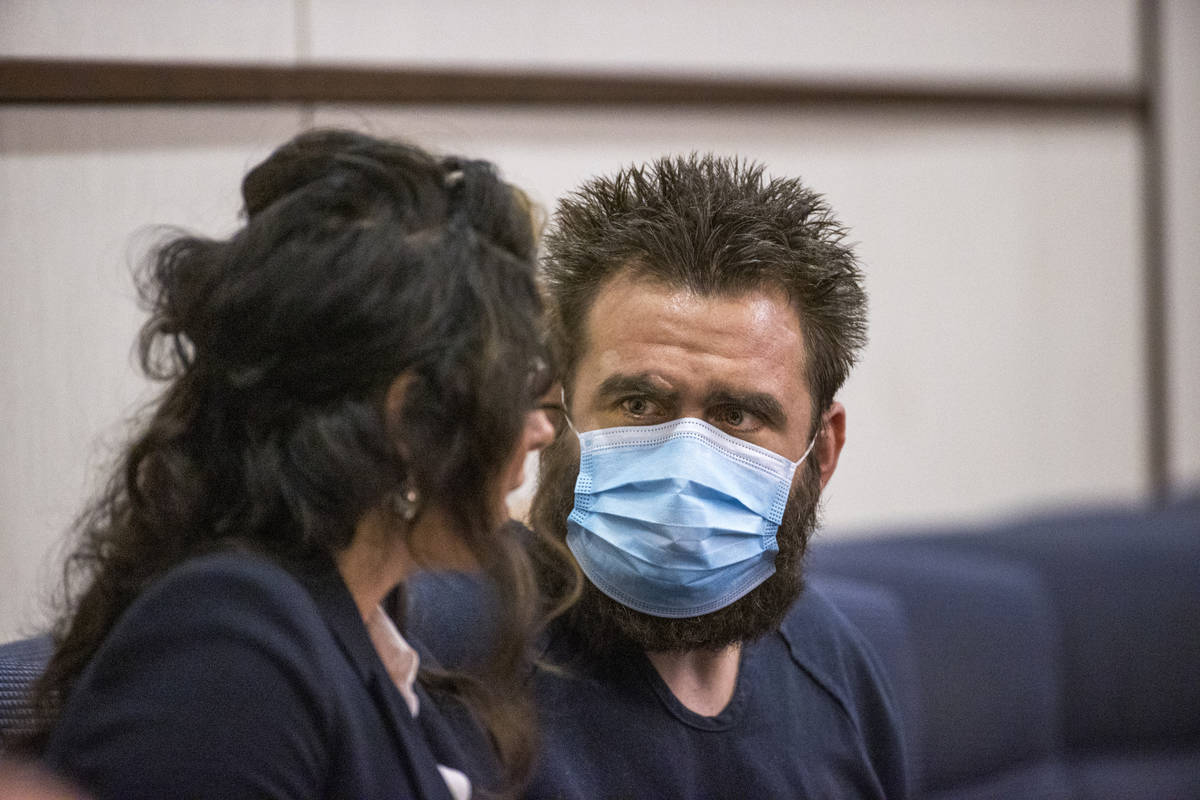 A Henderson judge reduced bail on Wednesday for the son of Oklahoma City bombing accomplice Terry Nichols, who is charged in the kidnapping and robbery of a 67-year-old man.

That’s down from the individual amounts of $250,000 set when the two men were charged with first-degree kidnapping of an older person with a deadly weapon, burglary, robbery, conspiracy and ownership/possession of a gun by a prohibited person.

The younger Nichols, who has a lengthy criminal history, was arrested last month, and Moya was arrested this week, authorities said.

During Wednesday’s hearing, a masked Joshua Nichols was alone in the jury box, where jailed defendants are often placed when criminal court proceedings do not involve a trial.

Afterward, Draskovich said he expected his client to post the bail, and he questioned whether the man played a role in the Feb. 6 kidnapping and robbery.

“There’s a sub-story that hasn’t been told,” Draskovich said. “And we look forward to the facts seeing the light of day.”

The recent charges involving Joshua Nichols stemmed from an encounter inside a vacant home on the 300 block of Milan Street in east Henderson.

A jeweler told police he was lured into the home by two men, identified as Joshua Nichols and Moya, and a woman who has not been charged.

Moya had laid what turned out to be costume jewelry on the kitchen table when the victim “heard a noise, which he later learned was the slide being manipulated on a handgun, behind him,” a police report said.

A bearded man, whom police identified as Joshua Nichols, aimed a black handgun at the right side of the victim’s head and demanded that he remove his jacket and pants, according to the report.

Joshua Nichols then pulled $1,700 cash from the victim’s wallet and stole his jacket, bracelets, a ring and a cellphone before the trio fled the vacant home, the report said.

A neighbor’s home surveillance camera captured a rented 2019 Cadillac XTS driving away from the scene, according to the report.

The car later was traced to a woman with ties to Joshua Nichols and Moya, though she has not been charged in the robbery. The victim identified the two men as his attackers in separate police photo lineups, the report said.

Asking the judge not to reduce bail for either man, Chief Deputy District Attorney Barbara Schifalaqua pointed out that Joshua Nichols had barricaded himself inside a shed with a weapon before his arrest. Moya, who had a previous felony conviction for escape, was on the run for more than two months, the prosecutor said.

In 2009, Joshua Nichols pleaded guilty to stealing a Yamaha motorcycle in Las Vegas and was given probation. His father is serving a life sentence for his role in the Oklahoma City bombing. McVeigh was executed in 2001.