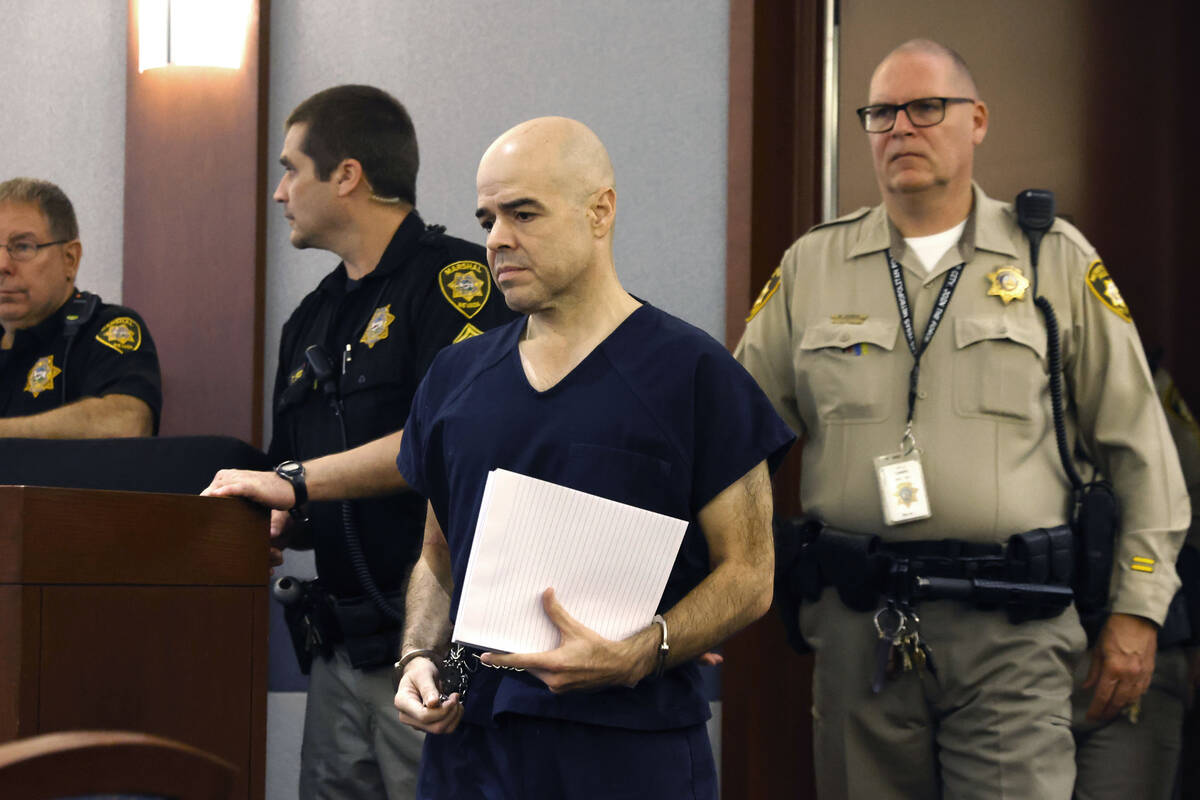 Outgoing Clark County Public Administrator Robert Telles, led into the courtroom at the Regional Justice Center during a court hearing in the civil case where the county is trying to remove him from office, on Wednesday, Oct. 5, 2022, in Las Vegas. (Bizuayehu Tesfaye Las Vegas Review-Journal) @btesfaye 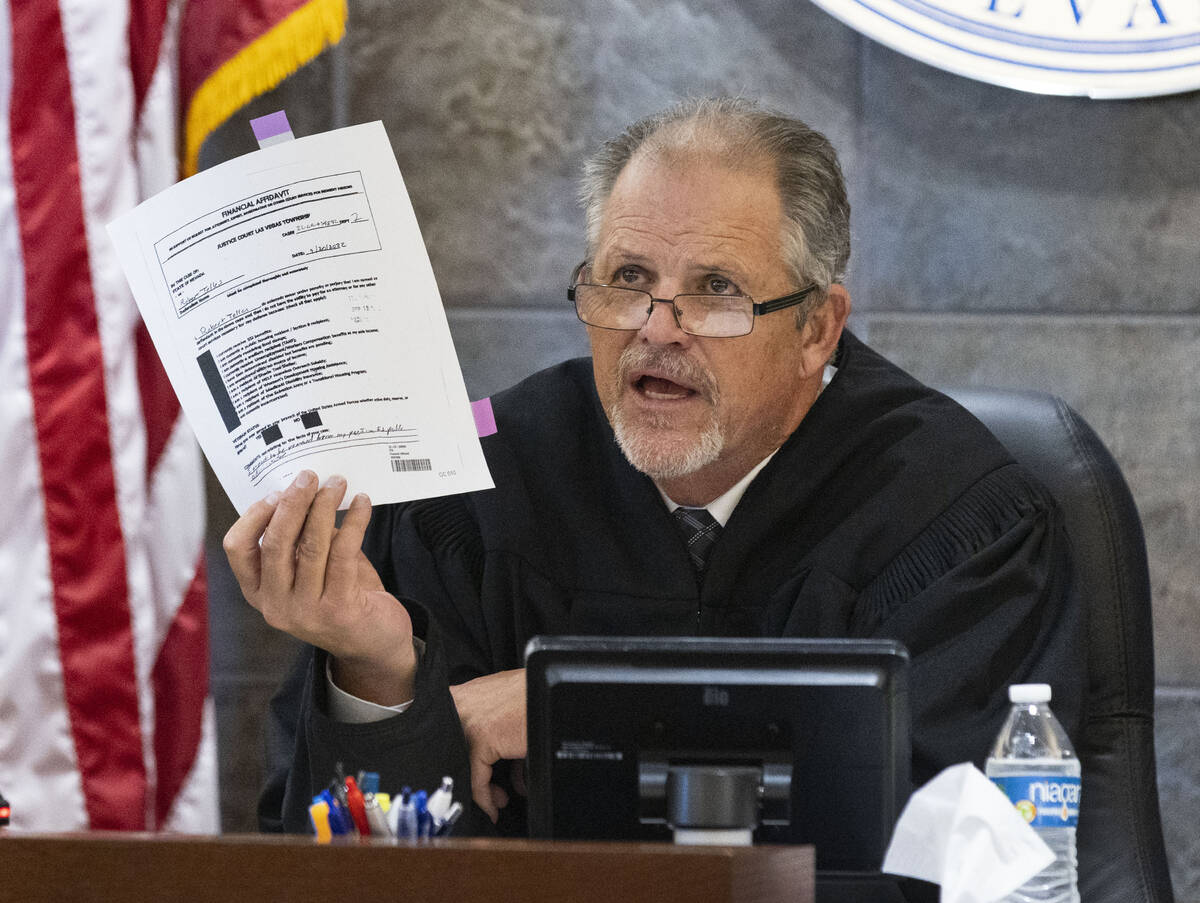 Judge David Jones presides over the outgoing Clark County Public Administrator Robert Telles' hearing at the Regional Justice Center during a court hearing in the civil case where the county is trying to remove him from office, on Wednesday, Oct. 5, 2022, in Las Vegas. (Bizuayehu Tesfaye Las Vegas Review-Journal) @btesfaye 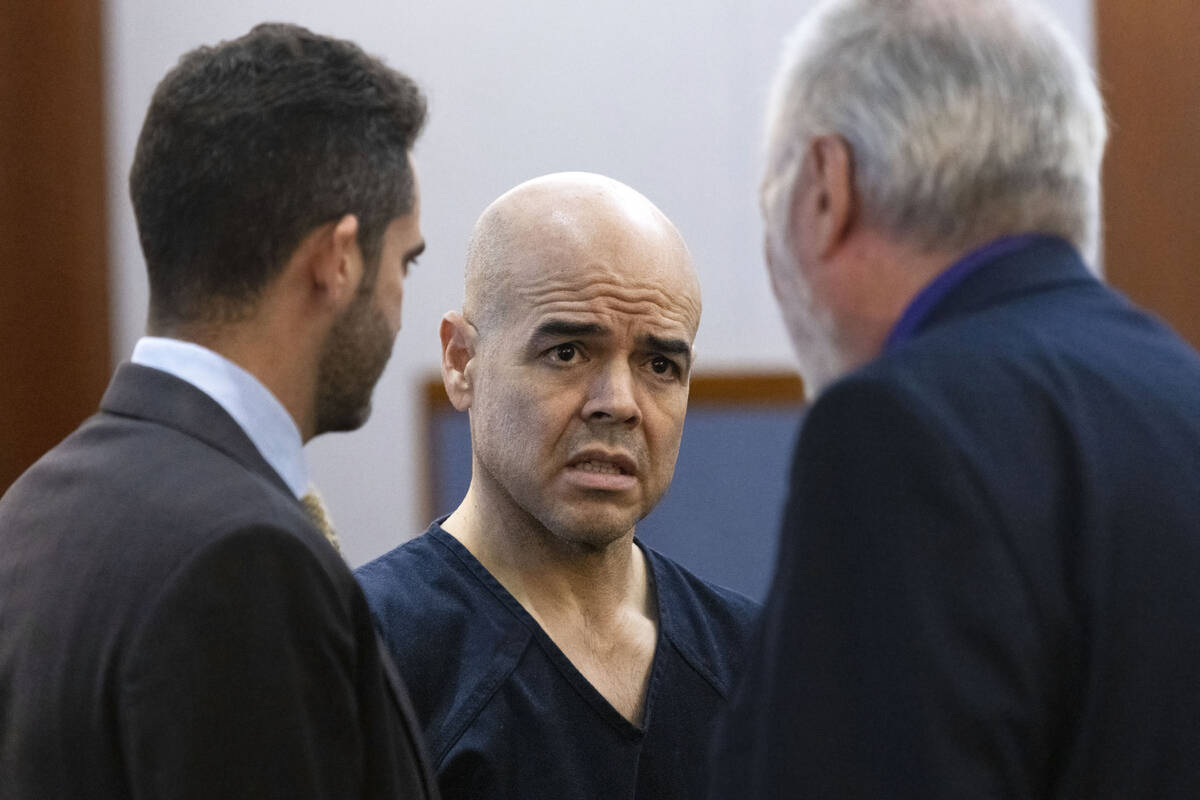 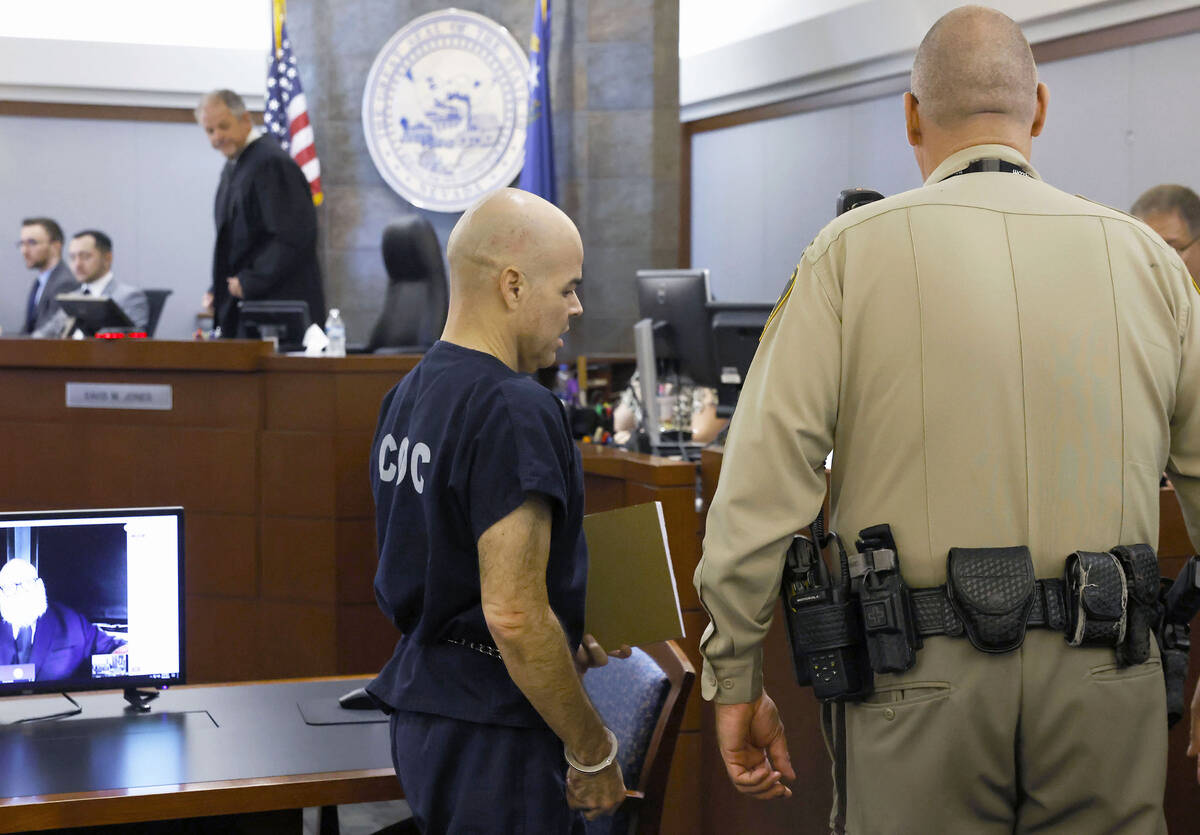 Outgoing Clark County Public Administrator Robert Telles, led out of the courtroom at the Regional Justice Center after a court hearing in the civil case where the county is trying to remove him from office, on Wednesday, Oct. 5, 2022, in Las Vegas. (Bizuayehu Tesfaye Las Vegas Review-Journal) @btesfaye 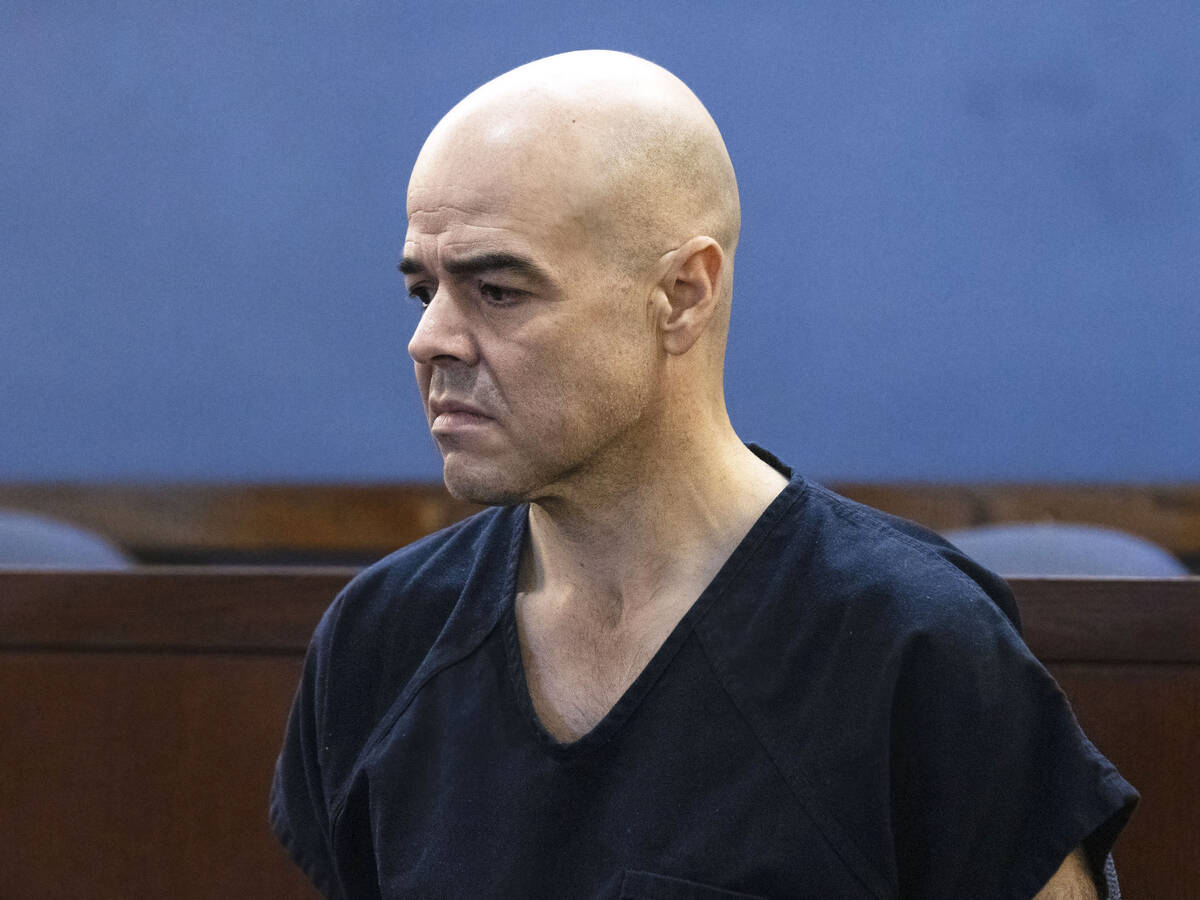 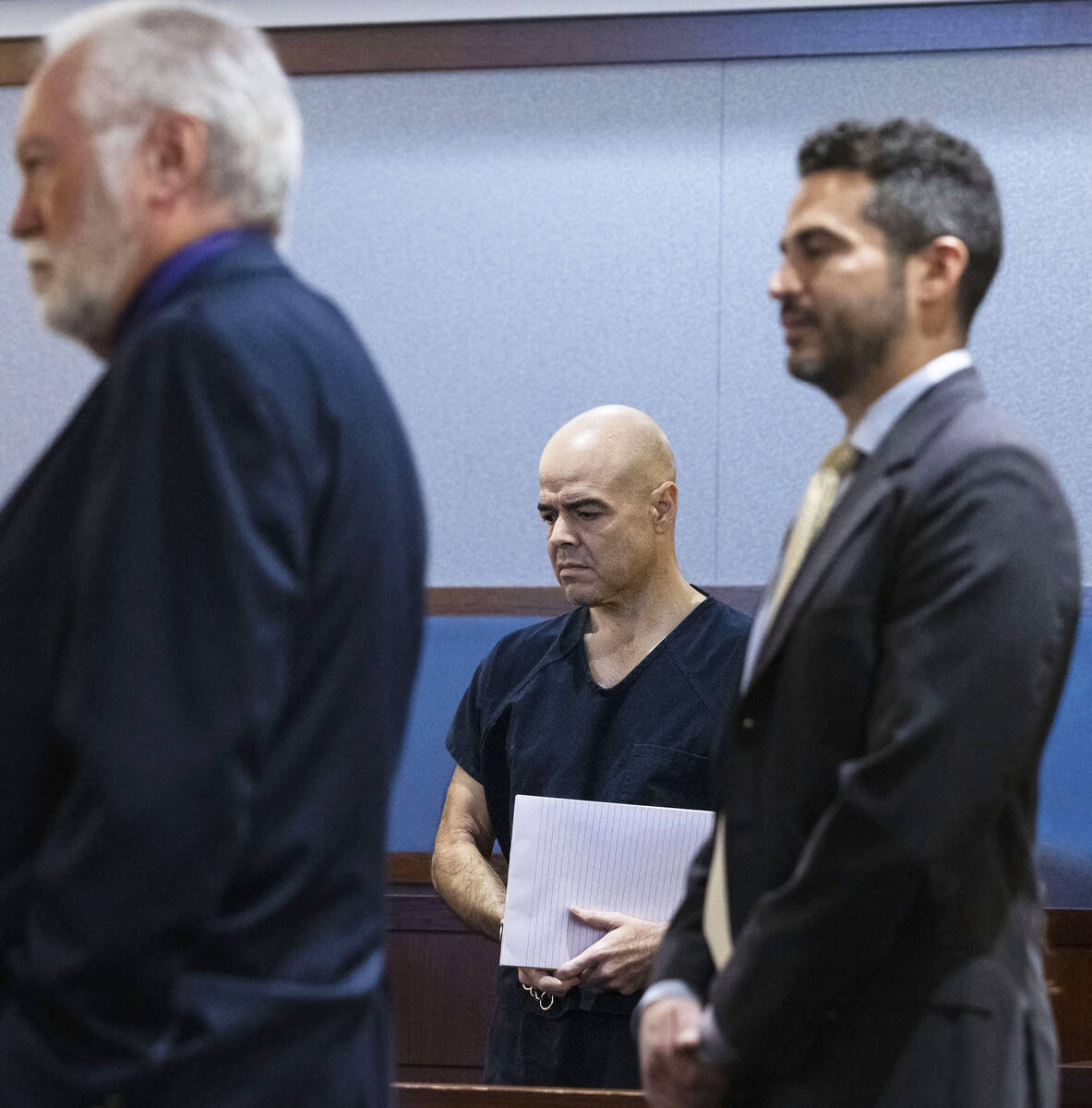 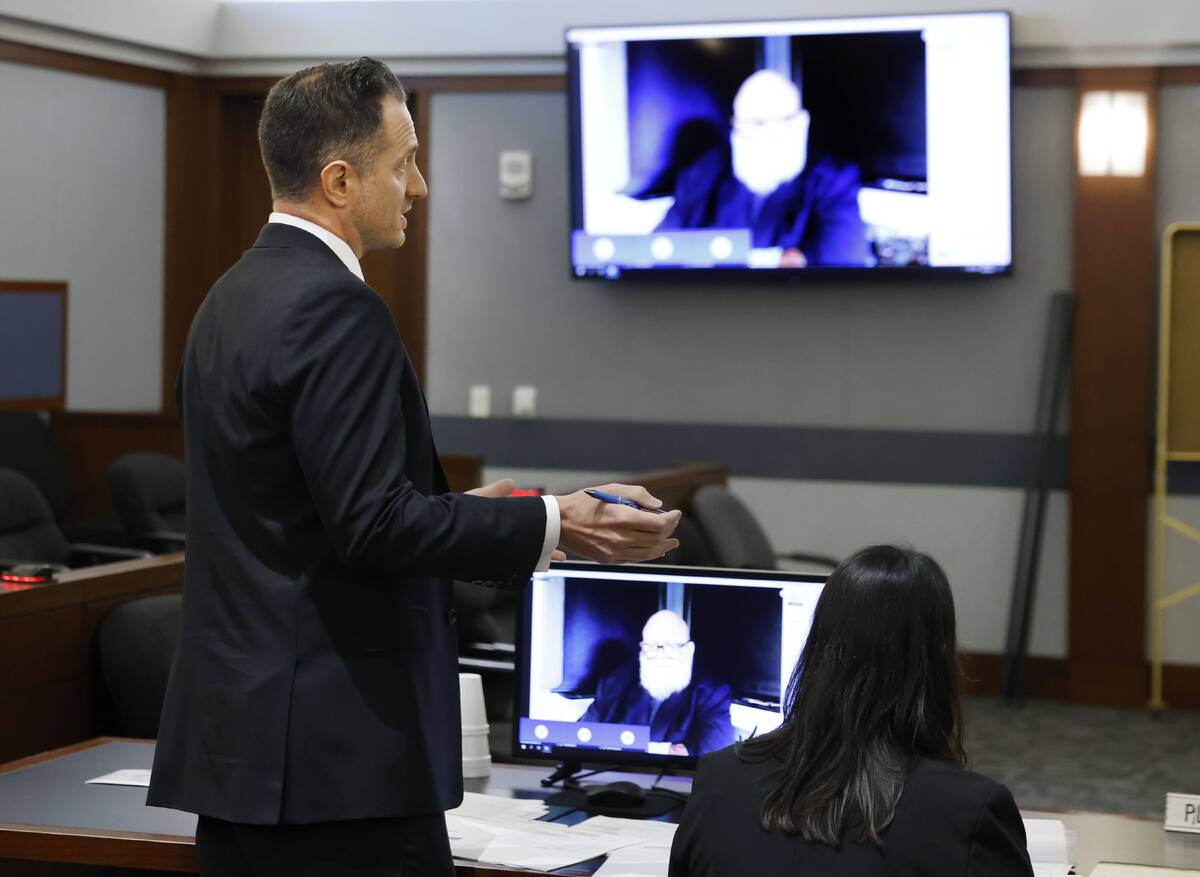 Jeffery Rogan, attorney representing Clark County, addresses the court during the outgoing Clark County Public Administrator Robert Telles' hearing as Telles' attorney Jeffery Rogan, appearing via videoconference, listens at the Regional Justice Center, during a court hearing in the civil case where the county is trying to remove him from office, on Wednesday, Oct. 5, 2022, in Las Vegas. (Bizuayehu Tesfaye Las Vegas Review-Journal) @btesfaye

District Court Judge David Jones on Wednesday ruled in favor of the county, which moved to oust the 45-year-old elected official following his September arrest in connection to the slaying of veteran Review-Journal journalist Jeff German.

The county had argued that Telles, who’s been jailed without bail since Sept. 7, was “neglectful of his duties.”

During a morning court hearing, attorney Travis Shetler said his client — who intends to seek bail on his murder charge — could fulfill his job through phone and video calls from the Clark County Detention Center, where he’s been held since his arrest.

“How is it untrue that he has not neglected to perform his duties,” Jones asked Shetler, who responded that “his detention is something outside of his control right now.”

In a motion filed in court Tuesday, Shetler wrote that Telles had executed and forwarded a power of attorney to his office in mid-September to “authorize other employees” there “to perform his duties.”

“Additionally, the undersigned unsuccessfully attempted to speak with anyone at the Office of Public Administrator” that day, the attorney wrote.

After Telles’ arrest, Clark County announced that the official was barred from county facilities, and that his staff had been ordered to no longer report to him.

Replacement to be named

The county, which was represented in court by the district attorney’s office, said commissioners will move to appoint a replacement until the new public administrator — to be elected in the Nov. 8 general election — takes over the office in January.

A possible date for the vote hasn’t been disclosed. A county spokeswoman confirmed Wednesday that Telles was no longer in office.

The morning hearing, originally set to take place a week ago, was pushed back after Telles’ defense requested time to file a response to the county’s motion because he expected the losing side to appeal, Shetler said.

The attorney, who appeared remotely from out of state, could not immediately be reached for comment.

Telles was jailed five days after German was stabbed outside his own house and found dead the next day. Telles was a lame-duck after he lost his June Democratic primary, but he has remained in the elected job, which pays about $120,000 a year.

Las Vegas police and prosecutors have said Telles was “lying in wait” when he allegedly attacked German, who had written stories critical of Telles’ handling of the office.

Current and former employees who spoke to German told him of turmoil, favoritism and bullying from Telles and a subordinate.

One of those people, Rita Reid, told the Review-Journal Wednesday that she was “very relieved” to hear about Telles’ removal.

“Certainly, no one would’ve wanted this outcome when we reached out to Jeff, but I think that this speaks — hopefully — to Jeff German’s family and the community that the justice system is taking this issue very seriously,” she said.

German’s stories contributed to Telles’ ouster by voters; he finished third in the three-way Democratic primary.

Reid, who is running to fill the seat, said she and her co-workers are “taking the necessary steps to improve the services that we provide to families and to those that are impacted by the loss of loved ones here in Clark County,” she said about the office, which handles the estates of dead people.

Before German was killed, Telles had publicly lashed out against the reporter on the internet. The Metropolitan Police Department alleges that on Sept. 2, Telles dressed as a day laborer, went to German’s neighborhood, where the crime took place.

Police said they found Telles’ DNA on the reporter’s body, and recovered bloodied cut-up shoes, and a ripped hat, similar to those that the suspect was caught wearing on surveillance footage.

In court, Judge Jones noted that Telles wrote in a financial affidavit requesting a public defender for the criminal case that, “I expect to be removed from my position as public administrator.”

“And now you want to come in and say, ‘I’m sorry, that piece of paper really doesn’t have the meaning it has there,’” Jones said.“‘That’s only if I want to use it for my benefit to burden the state with providing me with a legal defense because I no longer have any income.’”

Jones continued: “Now you’re saying, ‘no judge, he should maintain his position, maintain his employment, maintain his income.’ If that happens, counselor, does he not lose his right for public assistance for his criminal defense? Is that what your client wants?”

Shetler, who previously represented Telles in the murder case, said that expecting to be removed and being ousted were two separate things.

Similarly, the judge — noting that Telles hasn’t been convicted of a crime — questioned the county’s allegations that the official can’t fulfill his duties while he sits in jail.

“Doesn’t that seem a little bit opposed to what the law and fairness should be? He’s an innocent man as he sits here today, he’s guilty of nothing,” Jones said. “Yet you want me to take away his job title and his job, and his livelihood based on the fact that you have prevented him from doing his job?”

County attorney Jeffrey Rogan said that Telles is responsible for his situation.

“The fault of Mr. Telles’ custody status is his and his alone, he can’t do his job because he killed Jeff German, and whether that’s proved beyond the reasonable doubt at this stage doesn’t make any difference,” he said.

Before issuing his decision, Jones said Telles was at least partly responsible for being behind bars, noting that police, prosecutors and the court, had found enough reasonable doubt to arrest Telles, charge him, and hold him without bail.

That, along with his previous admission that he expected to be removed from office, “speaks volumes to this court,” Jones said.