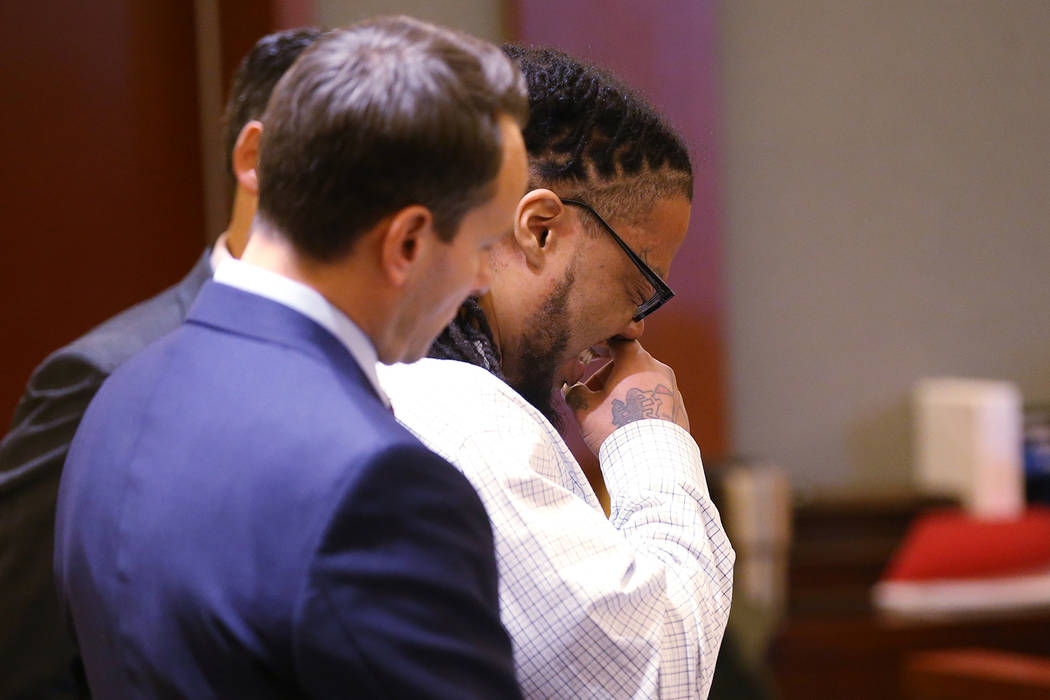 Ray Charles Brown cries as he reads a letter during the penalty phase of his capital murder trial at the Regional Justice Center in Las Vegas on Friday, Feb. 7, 2020. Brown was convicted of killing Lee's Discount Liquor clerk Matthew Christensen, and jurors sentenced him Friday to life in prison. (K.M. Cannon/Las Vegas Review-Journal) @KMCannonPhoto 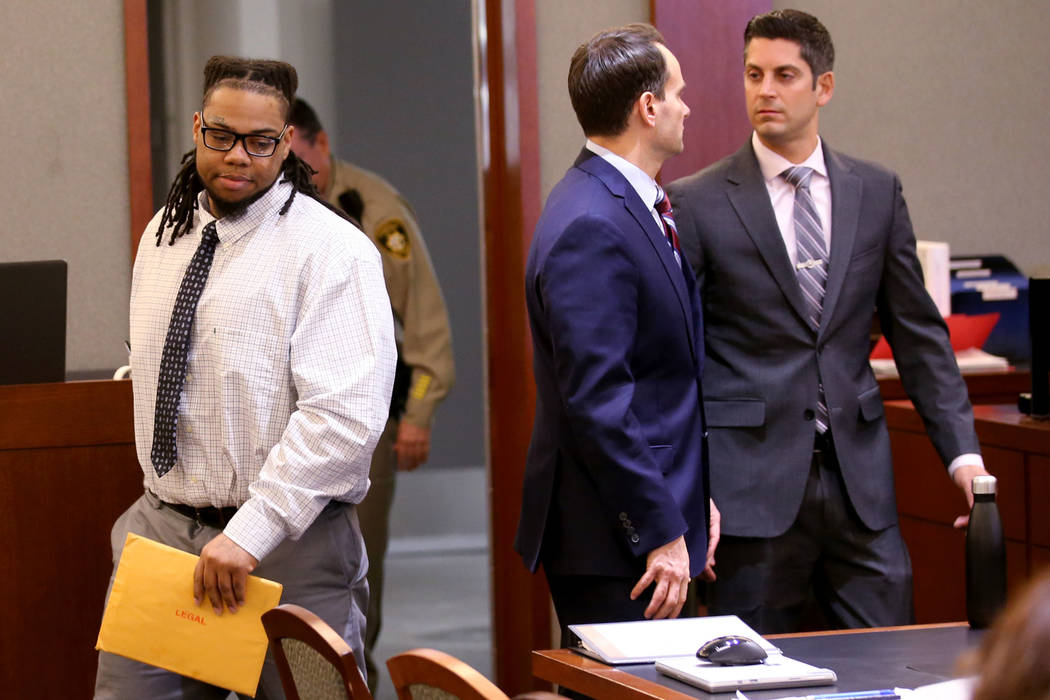 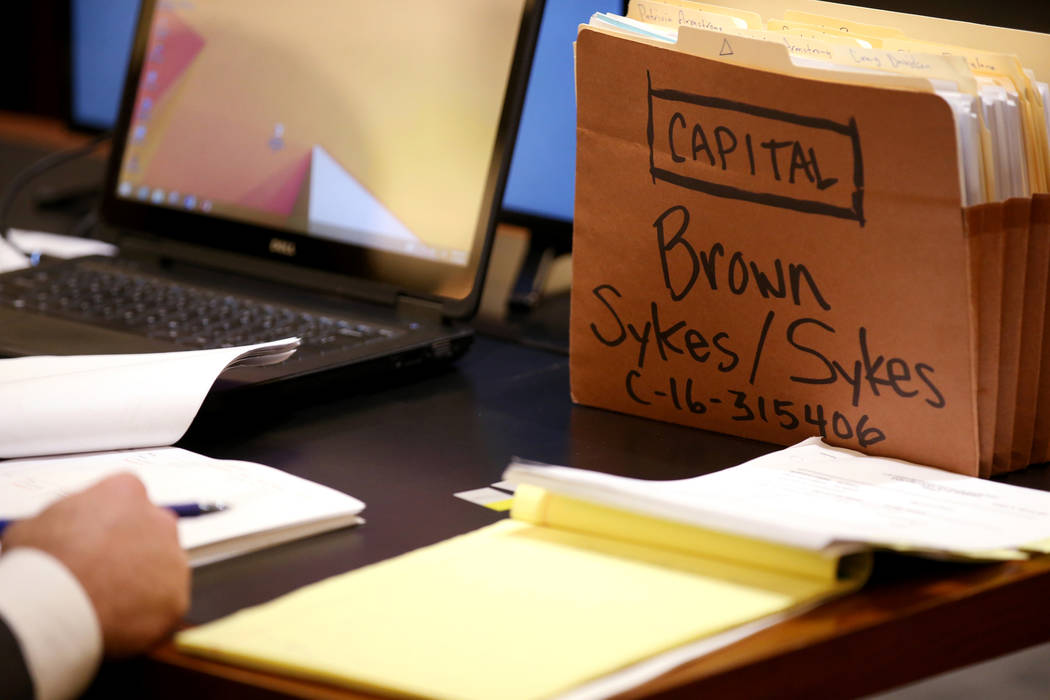 A case file on the prosecution desk during the penalty phase of the Ray Charles Brown capital murder trial at the Regional Justice Center in Las Vegas on Friday, Feb. 7, 2020. Brown was sentenced to life in prison for killing Lee's Discount Liquor clerk Matthew Christensen. (K.M. Cannon/Las Vegas Review-Journal) @KMCannonPhoto 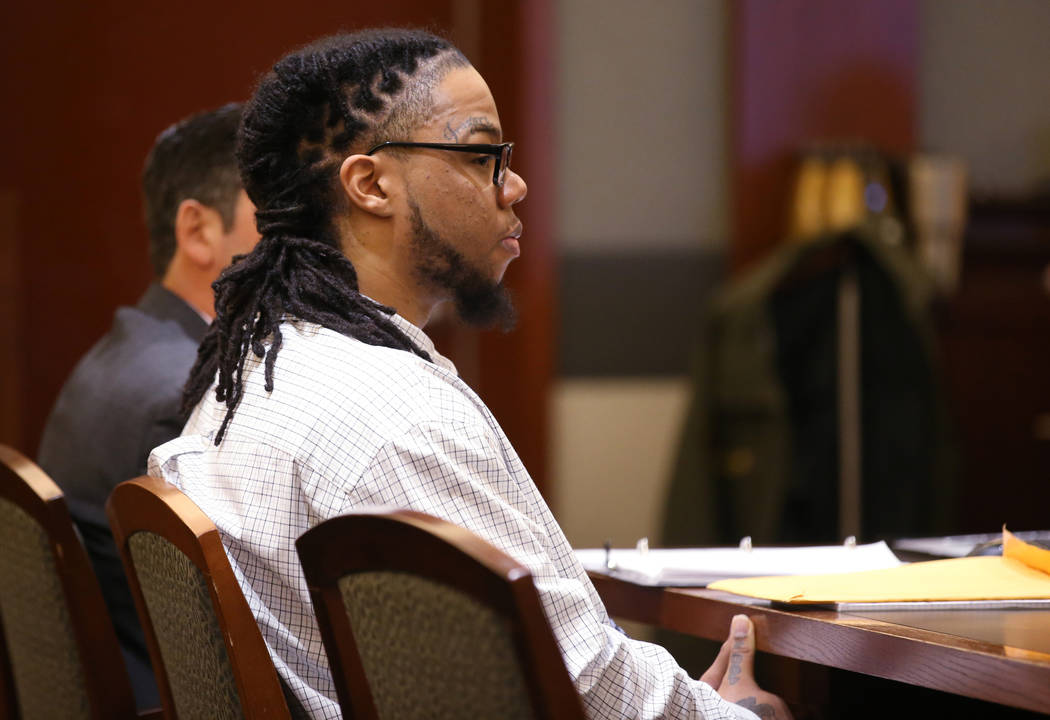 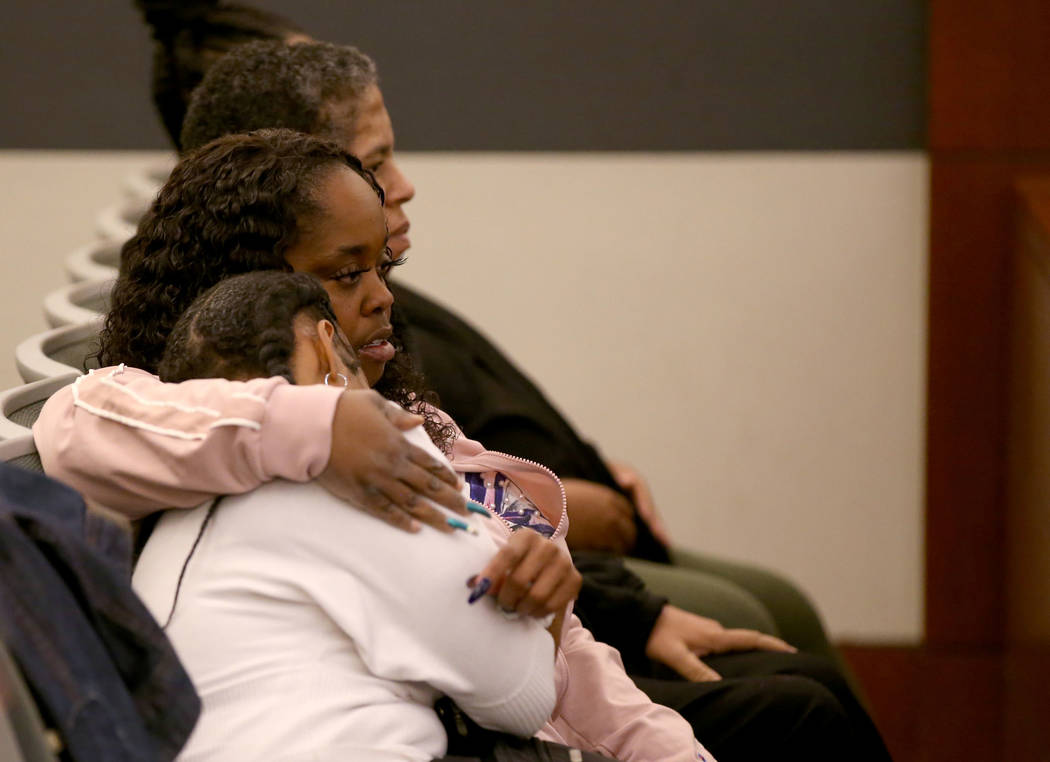 Loved ones of Ray Charles Brown listen to testimony during the penalty phase of his capital murder trial at the Regional Justice Center in Las Vegas on Friday, Feb. 7, 2020. Brown was sentenced to life in prison for killing Lee's Discount Liquor clerk Matthew Christensen. (K.M. Cannon/Las Vegas Review-Journal) @KMCannonPhoto 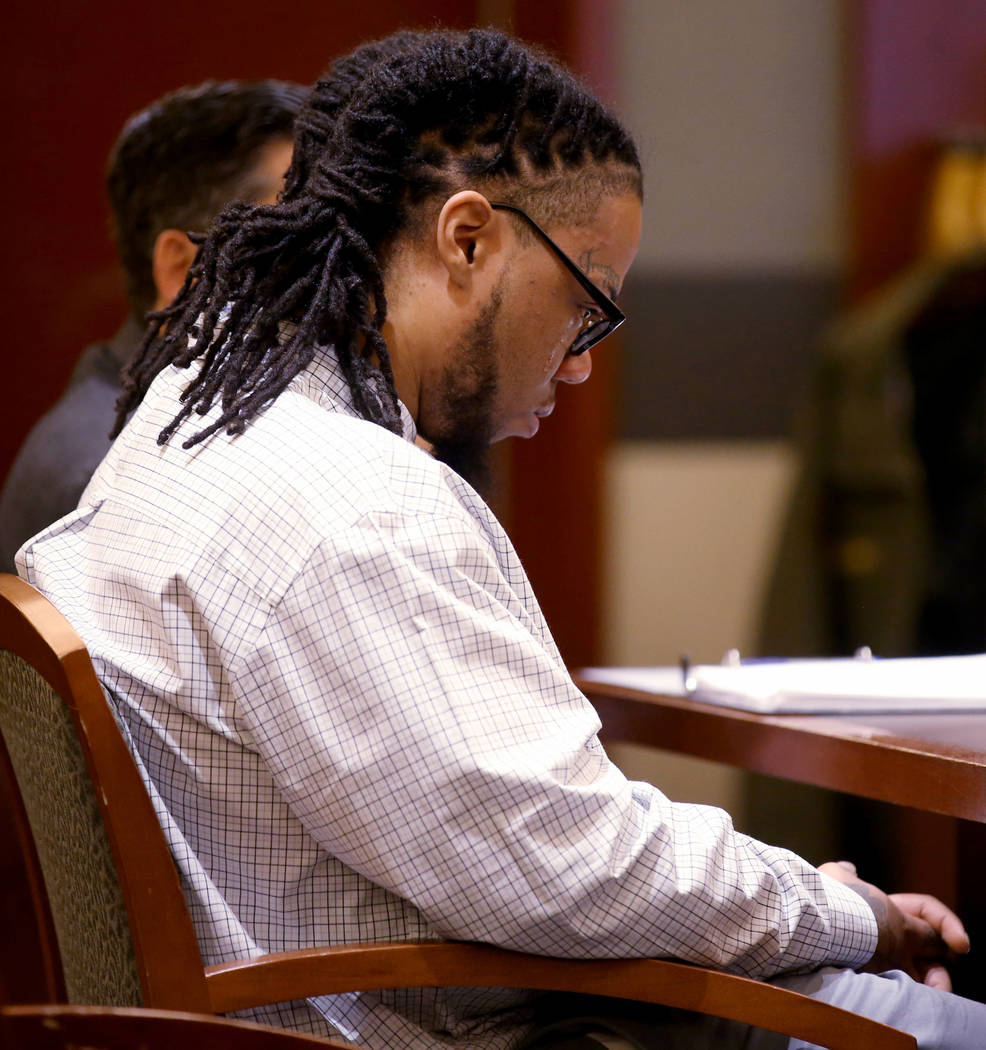 Ray Charles Brown cries as a hate letter he received is read during the penalty phase of his capital murder trial at the Regional Justice Center in Las Vegas on Friday, Feb. 7, 2020. Brown was sentenced to life in prison for killing Lee's Discount Liquor clerk Matthew Christensen. (K.M. Cannon/Las Vegas Review-Journal) @KMCannonPhoto 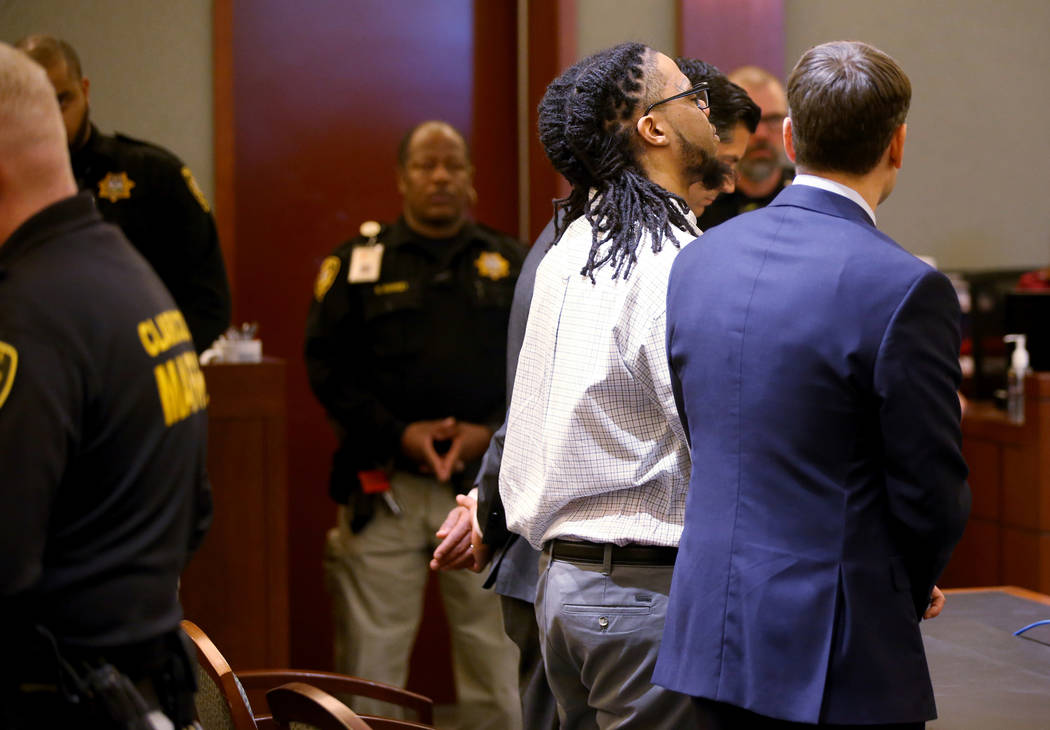 Ray Charles Brown reacts to a verdict of life with the possibility of parole while flanked by attorneys Richard Tanasi, left, and Josh Tomsheck during the penalty phase of his capital murder trial at the Regional Justice Center in Las Vegas on Friday, Feb. 7, 2020. (K.M. Cannon/Las Vegas Review-Journal) @KMCannonPhoto 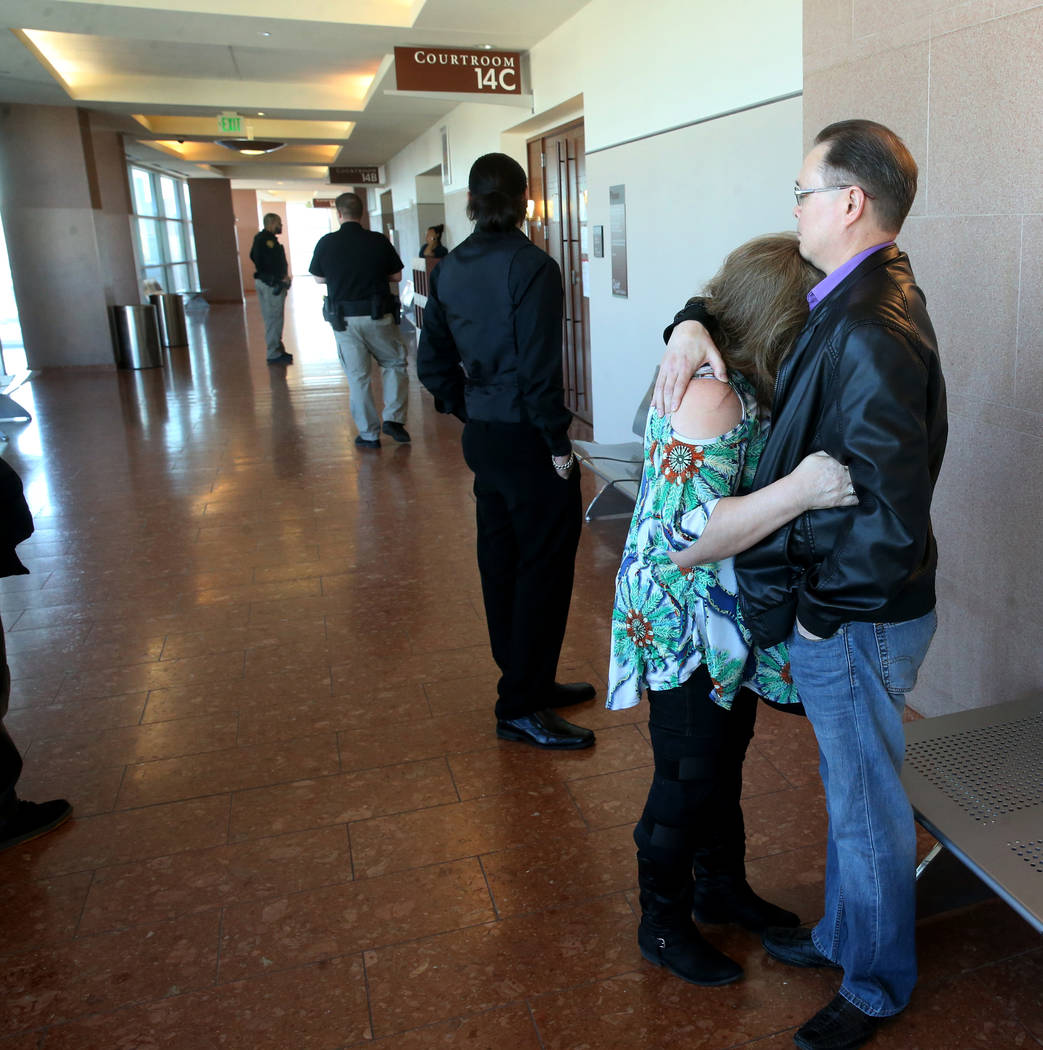 Dennis and Theresa Christensen, parents of murder victim Matthew Christensen, hug outside the courtroom after Ray Charles Brown was given the possibility of parole during the penalty phase of his capital trial at the Regional Justice Center in Las Vegas on Friday, Feb. 7, 2020. Brown, who was convicted of killing Christensen, could have received a death sentence. (K.M. Cannon/Las Vegas Review-Journal) @KMCannonPhoto 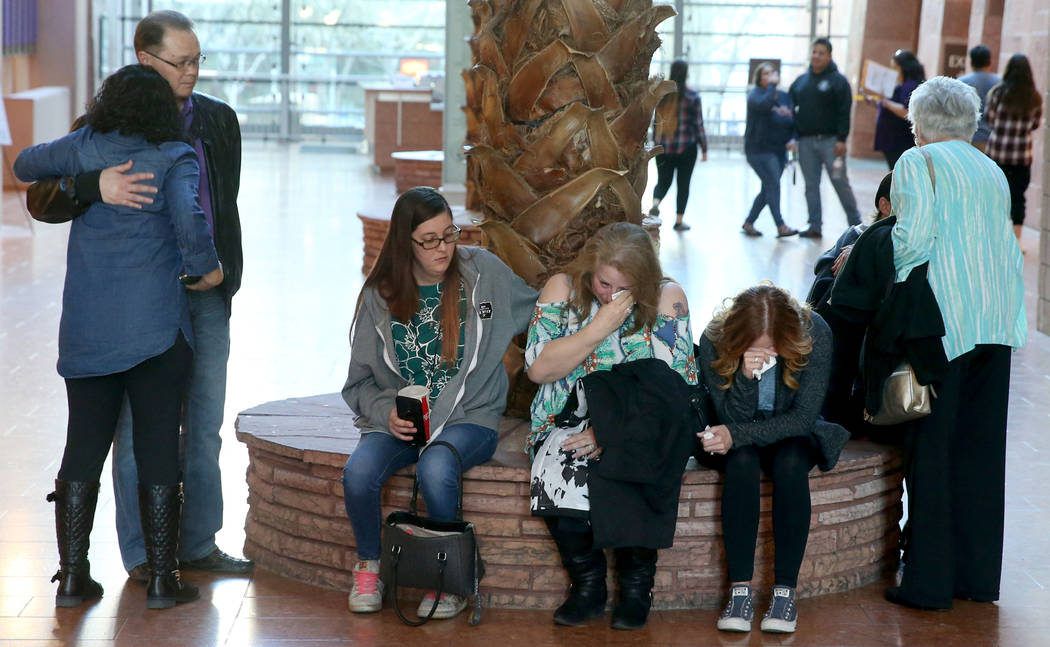 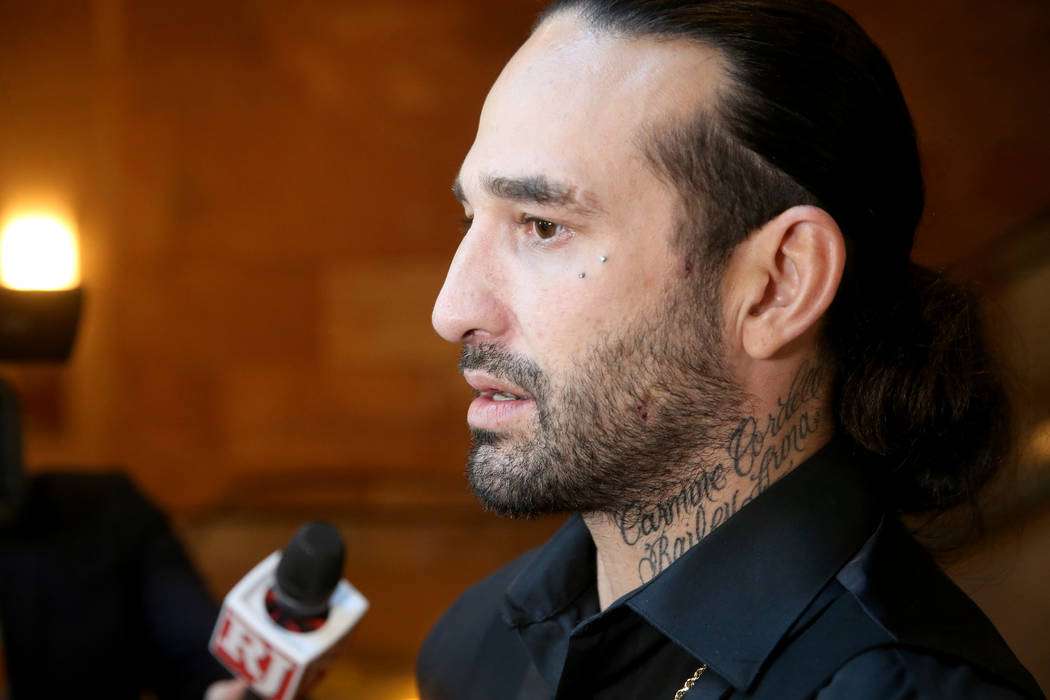 Robbie Christensen, brother of murder victim Matthew Christensen, talks to the news media outside the courtroom after Ray Charles Brown was given the possibility of parole during the penalty phase of his capital trial at the Regional Justice Center in Las Vegas on Friday, Feb. 7, 2020. (K.M. Cannon/Las Vegas Review-Journal) @KMCannonPhoto

A Las Vegas man must spend the rest of his life in prison for fatally shooting a 24-year-old liquor store clerk during a robbery, jurors decided Friday.

The jury could have sentenced Ray Charles Brown, 26, to death for killing the clerk, Matthew Christensen, in April 2016. Instead, the panel imposed a life sentence with the possibility of parole.

Jurors decided that several mitigating factors for Brown, including their finding that “humanity failed him,” outweighed aggravating circumstances that could have resulted in capital punishment.

Christensen’s relatives, seated behind prosecutors in the courtroom gallery, embraced each other and cried as the verdict was read. Brown lowered his head.

Brown was convicted earlier this week of nine counts, including first-degree murder, robbery, kidnapping, burglary, assault and conspiracy in connection with the killing inside the back room of a Lee’s Discount Liquor. He faces additional sentences for the remaining charges at an April hearing.

Before his sentence was handed down, Brown asked for leniency.

“I would like to apologize to the Christensens,” Brown said, reading from a paper, his hands shaking and his voice cracking. “I’m sorry. Hopefully one day y’all can find forgiveness in your heart. Today I am asking for y’all mercy and to give me another chance.”

He also directed comments to his relatives seated behind him in the courtroom gallery.

Christensen was shot six times, after he handed over his wallet and cellphone and threw his hands in the air. Prosecutors said he had lured the robbers away from his pregnant coworker, and he was shot after he told Brown he could not open the store’s safe.

Chief Deputy District Attorney Pamela Weckerly asked jurors to consider “the totality of a loss like that.”

“Life doesn’t prepare you for that type of loss,” the prosecutor said.

Fellow prosecutor John Giordani pointed to the criminal past of Brown, a documented gang member with charges that dated back to 2005, when he was a juvenile, including drug possession, petty larceny, battery and coercion.

In an effort to spare his life, defense attorneys painted a picture of a young Brown who was bullied in school and grew up without his father, while his mother was sent to prison on a drug charge when he was about 5. Family members said Brown is now a father to two young children.

“Placing a needle in Ray’s arm can’t take the bullets out of Matthew,” Brown’s lawyer, Josh Tomsheck said. “My question then is: When Ray breathes his last breath as a result of a death verdict, when his breathing stops, do the tears that were shed in this courtroom stop? Or is there just more? And does the cycle of pain just start all over again?”

When Brown was in grade school, his mother drank and used drugs with him, before she went to prison, the attorney told jurors, and Brown had no father figure or male role model in his life.

At trial last week prosecutors played the surveillance video of the robbery and killing and heard a 911 call from Christensen’s then-pregnant coworker.

The video showed Brown fire multiple shots that struck Christensen, a part-time employee, who had directed his killer away from his coworkers and to the back of the southwest valley store.

Another armed robber, Lee Dominic Sykes, 24, pleaded guilty to first-degree murder with a deadly weapon, and was sentenced to between 25 and 65 years in prison.

In Brown’s case, jurors found that abandonment by his father, neglect from his mother, a lack of stability as a child, and his upbringing in a violent neighborhood were among the mitigating factors that outweighed aggravating circumstances.

In closing arguments, Tomsheck told jurors that Brown has tried to better himself since his arrest in Christensen’s murder.

“There’s value in everybody, good and bad,” Tomsheck told the Las Vegas Review-Journal outside the courtroom. “And I think the verdict shows that the jury listened to his ability to be reformed, and to be a contributing member of society, even if he’s locked up.”