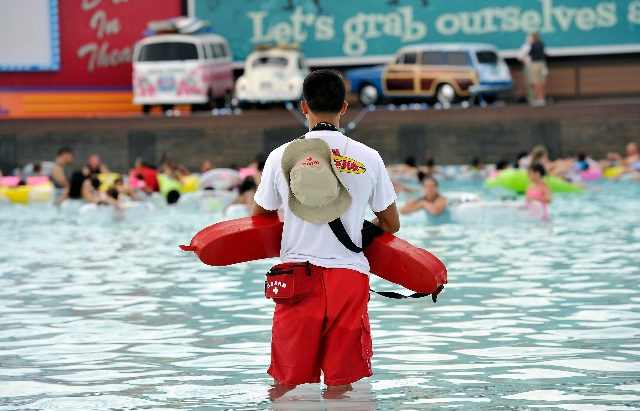 Parents of a 6-year-old boy who nearly drowned in a wave pool at Cowabunga Bay have sued the Henderson water park.

Cowabunga Bay did not have enough lifeguards on staff on May 27, when the boy was under water “for a lengthy period of time,” the lawsuit filed late Tuesday in Clark County District Court says. Peter Gardner and Christian Gardner, of Henderson, said their son Leland spent weeks in the hospital for neurological damage and now requires 24-hour care.

A representative for Cowabunga Bay did not reply to multiple requests for comment Wednesday.

The park was criminally negligent and “had no intention of ever providing the lifeguard coverage required by state law and knowingly, intentionally and willfully deviated” from its prescribed lifeguard plan required by health authorities, the Gardners allege in court papers.

Las Vegas attorney Donald Campbell, who is representing the Gardners, said reports from the Southern Nevada Health District back up his clients’ accusations.

“(This is) a chronic lapse of responsibility on the part of Cowabunga Bay as demonstrated in our complaint,” Campbell said.

The lawsuit doesn’t specify how many lifeguards were on duty on May 27, but notes that a lifeguard plan the park submitted in 2014 called for six lifeguards at Cowabunga Bay’s Surf-A-Rama Wave Pool. The health district rejected that plan, saying the park needed at least 17 there.

Cowabunga Bay submitted a revised proposal that met the health district’s expectations, but inspection reports obtained by the Las Vegas Review-Journal show the park has failed to maintain adequate lifeguard coverage at the wave pool on multiple occasions.

In May, the health district received a complaint regarding lifeguard coverage the day after Leland nearly drowned. The health district investigated the claim on May 29 and found multiple safety violations, including that only 14 of 35 required lifeguards were at the park an hour before it was scheduled to open, and failure to maintain proper water-safety signage.

On June 9, the health district during an annual inspection found the park had only eight of the required 17 lifeguards at the wave pool. The health district fined Cowabunga Bay $118 and noted that “failure to maintain adequate lifeguard coverage could result in closure with fees.”

The Gardners’ lawsuit says Leland went to Cowabunga Bay on May 27 for a “playdate” with a friend and the friend’s father. Police reports say the boy was 5 at the time, but the lawsuit says he was 6.

Leland wasn’t wearing a life jacket when he went into the wave pool and “fell off his inner tube,” the suit says. He was “submerged at the bottom of the wave pool for a lengthy period of time.”

His resulting health problems will require “rehabilitative therapy for the rest of his life,” the suit says.

Cowabunga Bay has recently had other lifeguard-related trouble. This week certifications were briefly invalided after the Nevada Health and Human Services’ Public and Behavioral Health Division stripped recognition from the Texas-based company that trains the park’s lifeguards.

After evaluating the aquatic safety courses the National Aquatic Safety Co., or NASCO, teaches, the state determined its controversial in-water-intervention protocol, which specifies the use of the Heimlich maneuver, was “not supported by relevant scientific literature.”

Lifeguards in Nevada must complete “a Red Cross Advanced Lifesaving Course or the equivalent,” according to Nevada law. The American Red Cross teaches the use of chest compressions and rescue breaths, also known as cardiopulmonary resuscitation or CPR, to save someone from drowning.

NASCO told the state Monday it would remove the in-water-intervention protocol from its teaching manual within three days.

It’s unclear if the Heimlich maneuver was used during Leland’s rescue. A Henderson police report said a lifeguard “administered chest thrusts” while swimming with the boy toward an exit ladder.