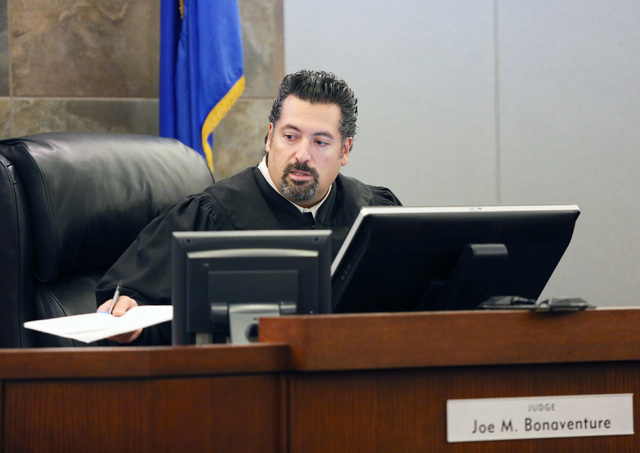 Judge Joe M Bonaventure works in July 2014 at Regional Justice Center in Las Vegas. “The idea of the Community (Impact) Court is to involve many different agencies,” he said of a new program. (VIEW FILE)

The Las Vegas Township Community Impact Court is a new initiative is aimed at keeping homeless people cited for petty crimes in the Las Vegas resort corridor from having to spend lengthy periods in jail.

The associated Restorative Justice Program is designed to reduce recidivism among nonviolent offenders by helping them get the help they need to get off the streets.

“A lot of it will be aimed at homelessness, near homelessness issues, public vagrancy and illegal vending, like people selling water bottles or CDs on the Strip,” said Justice of the Peace Joe M. Bonaventure. “The program will allow us to assess each defendant and find out what their needs are and what the root cause of the behavior is.”

Bonaventure noted that a person cited for a crime might be given a court date 30 to 90 days away. Often, that person doesn’t appear in court, and a bench warrant for arrest is issued. Once the person is arrested, he or she spends time in jail before seeing a judge.

“That doesn’t really solve the problem, and it’s created a revolving door of individuals who keep going through the same procedure,” Bonaventure said. “Spending a weekend in jail doesn’t help anybody. Those are the violent offenders, the serious offenders and the repeat offenders.”

Under the program, police officers would issue some offenders citations with court dates a week or two away. The hope is that the short turnaround would make it more likely the defendants would appear in court, where they would be assessed before appearing before the judge.

“The idea of the Community (Impact) Court is to involve many different agencies,” Bonaventure said. “It will involve the courts, the defense bar, the Clark County district attorney, the Las Vegas Metropolitan Police, community agencies like HELP of Southern Nevada and other service providers.”

Those who comply with the court’s recommendations likely would receive reduced or suspended sentences.

“My concern is the basic question of what efforts will be made to ensure the due-process rights of the accused are being protected,” said Dayvid Figler, a private defense attorney. “It’s not just about the possible favorable outcome, but the penalties for failures, representation and the ability to challenge bogus prosecutions from the onset.”

Bonaventure asserted that all of those cited would retain their normal statutory rights, including their right to be advised of the charges in a timely manner, the right to a trial and the right to an attorney.

Figler said he was interested to watch how the program works and what follow-up methods are involved.

The program was presented at a Metro First Tuesday event Jan. 3 at the department’s Convention Center Area Command. Bonaventure spoke and noted that it drew many people, including representatives from the security offices of many hotels on the Strip.

The program is funded in part by a $200,000 grant from the U.S. Department of Justice’s Bureau of Justice Assistance in partnership with the Center for Court Innovation. Clark County was one of 10 sites selected in April for the grant.