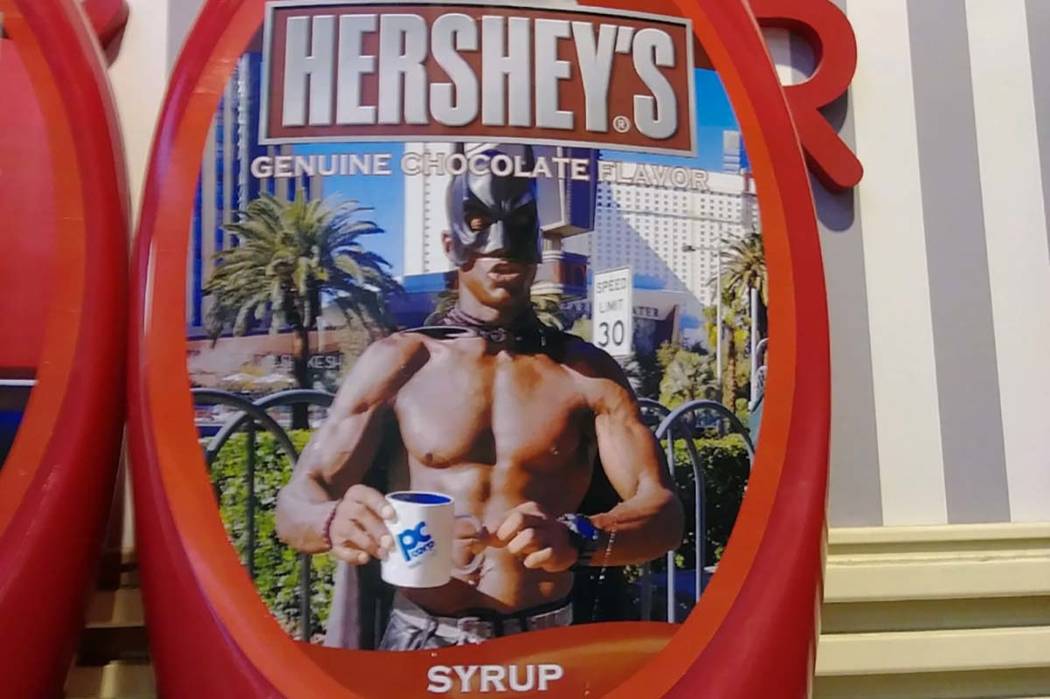 "The Black Batman" is pictured on a bottle of Hershey's chocolate syrup. (Provided with court documents)

A Las Vegas street performer, “The Black Batman,” sued The Hershey Co. last month, claiming the chocolate maker used his image without permission at its store on the Strip.

According to a lawsuit filed Oct. 5 in Clark County District Court, the company, which operates Hershey’s Chocolate World, used a picture of Iesa Britt dressed as “The Black Batman” on lighted signs and bottles of Hershey’s chocolate syrup sold in the store.

Britt performs on the Strip while wearing a Batman mask and cape. He dances and takes photographs with tourists for tips, “usually while shirtless,” according to the lawsuit.

Britt also performs in Las Vegas as a rapper under the name Blackice, but he “often incorporates his persona as The Black Batman into his performances” and music videos, according to the lawsuit.

Court documents included a photo of Hershey’s syrup with a shirtless Britt in a Batman mask on the front, as well as a picture of a lighted sign advertising the syrup with Britt’s image.

The syrup bottle had the phrase “genuine chocolate flavor,” which appears on other Hershey’s syrup products, over Britt’s picture.

The lawsuit claims Hershey’s violated Britt’s “right of publicity” by using his image without his written consent.

Britt said Thursday he wasn’t aware the store was using his picture until a local man he frequently sees on the Strip told him about it.

Britt said he has lived in Las Vegas for about 10 years and has worked as a street performer for two.

“I love being a performer; I love seeing people smile,” he said.

Britt’s attorney, Daniel Price, said Thursday that Hershey’s “violated clear Nevada law and used his picture for their own commercial use.”

The lawsuit seeks at least $15,000 from The Hershey Co. “for general damages, for mental distress, humiliation, and indignity,” as well as attorney fees, according to court documents.

Requests for comment from Hershey’s were not immediately returned.