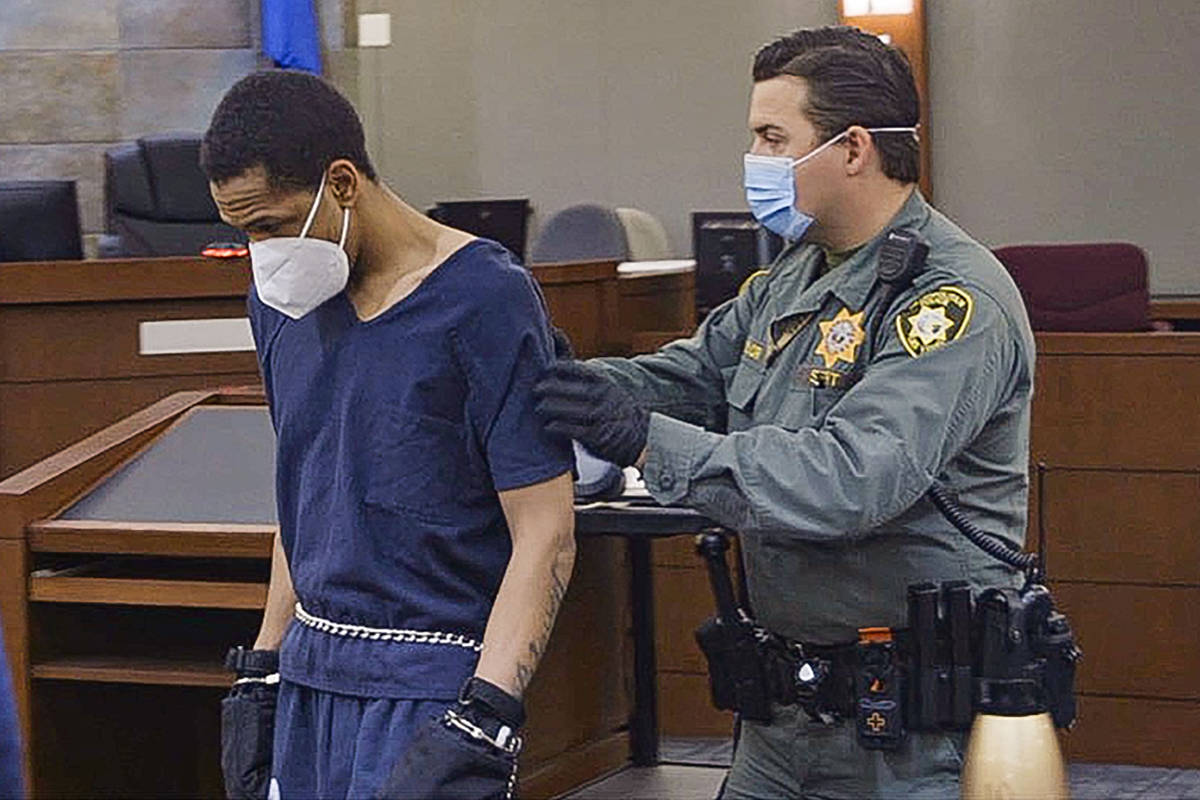 Terrell Rhodes, accused of killing his girlfriend’s 2-year-old son, is escorted into court for his initial arraignment at the Regional Justice Center in Las Vegas on June 2, 2021. (Rachel Aston/Las Vegas Review-Journal) @rookie__rae

After Terrell Rhodes confessed to killing a missing 2-year-old, he drew detectives a map that led them to the body, according to newly released court transcripts.

Rhodes said he hit his girlfriend’s son, Amari Nicholson, several times after the child wet himself.

“He said he was gasping for air and then turned blue and purple in the face,” Metropolitan Police Department Detective Opal Deeds testified to a grand jury last month.

Rhodes told detectives that he attempted CPR, but he could see that Amari had died and could not be revived.

He then drew detectives a map of the Emerald Suites apartment complex off Paradise Road and Twain Avenue, where Amari lived with Rhodes and his mother, Tayler Nicholson, who was out of state at the time.

Rhodes drew a line where he carried the toddler’s body just a few hundred yards away and an “X” where he buried it underneath a brick wall that had soft dirt, Deeds testified.

Amari’s body was found May 12 underneath the wall near an asphalt overhang that lines the parking lot of the nearby Siegel Suites and McDonald’s. He had been missing since May 5.

Deeds testified that when she first interviewed Rhodes at the apartment complex, there was a small area of blood spatter on the wall that matched his DNA. There also was a grocery bag of clothes that would fit Amari and smelled of urine.

Rhodes initially told police that Amari had been kidnapped by his aunt before changing his story when confronted by police in an interview on May 11, Deeds testified.

Jurors were played a video of the interview with Rhodes, starting after he drew the map for officers.

Rhodes was left in the 8-by-8-foot interview room by himself. His right hand was handcuffed to a metal barrier on the table, and his left hand was free. He then started to become agitated and pulled at his handcuffed wrist with his free hand.

“It looks like he’s trying to pull his hand out of the handcuff, and he’s saying, ‘Let me out of here,’ ” Deeds said.

Deeds then entered the room with her partner to calm Rhodes down. She moved a Coke can off the table. Rhodes then stood up partially on the chair, reached over and removed Deeds’ loaded gun from its holster.

“Detective Sanborn and I struggle with him for a few seconds, try to gain control of the handgun,” Deeds said. At some points, Rhodes pointed the gun at her and her partner.

The detectives were able to get him face down on the table, and two other detectives also came into the room to help pry the gun away from Rhodes.

Rhodes is expected back in court June 25.