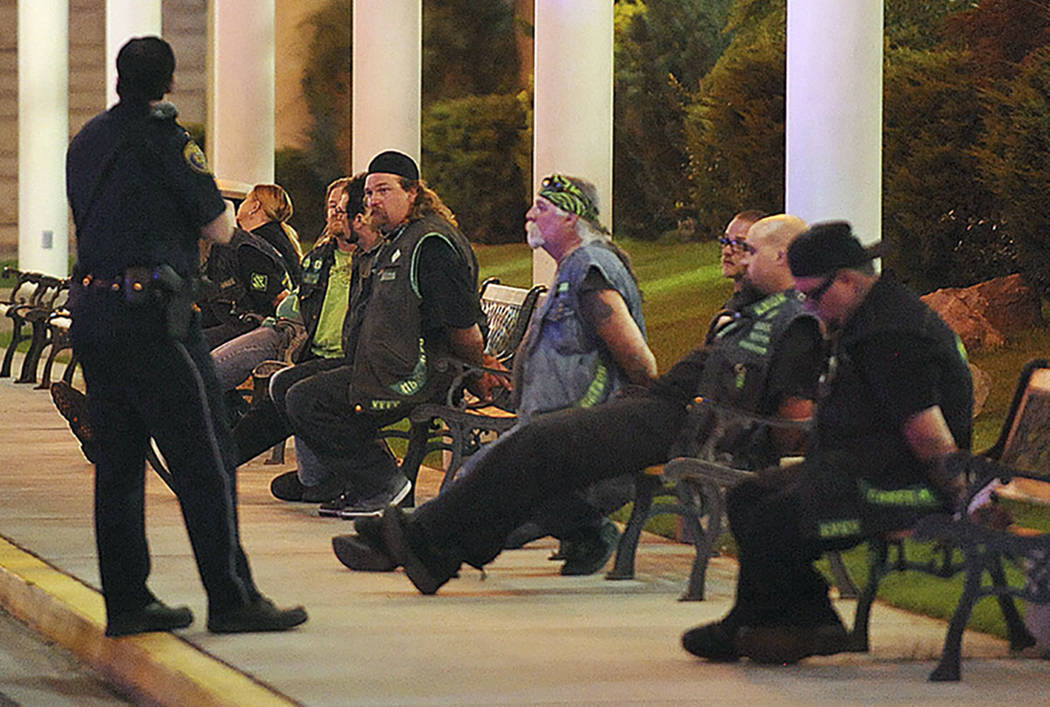 Police officers keep an eye on handcuffed men at the east entrance to John Ascuaga's Nugget after a shooting at the Sparks hotel-casino in September 2011. (The Reno Gazette-Journal via AP) 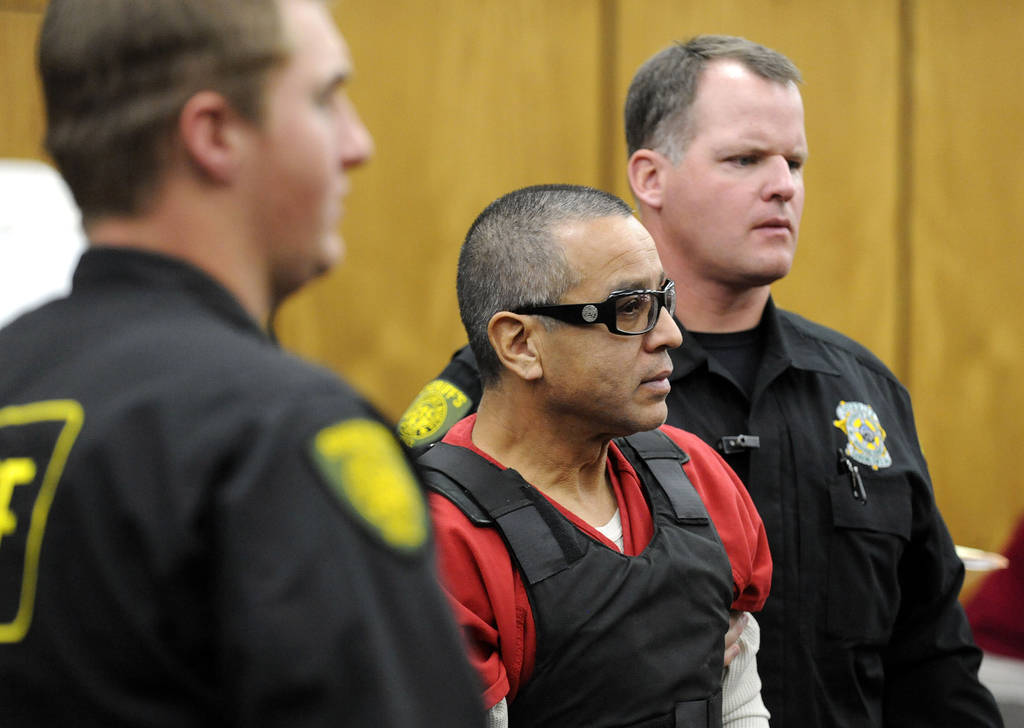 An undercover agent who infiltrated a Las Vegas chapter of the Vagos Motorcycle Club for two years offered a glimpse into the underworld of outlaw bikers this week as he testified during a federal racketeering trial.

Prosecutor Tracey Batson asked who would make such a decision, and Brancato pointed to Pastor Fausto Palafox, the Vagos international president known as “TaTa,” seated among a crowd of lawyers and seven fellow defendants.

Brancato, a deputized agent with the U.S. Bureau of Alcohol, Tobacco, Firearms and Explosives, detailed the thorough application process and how he became trusted enough to earn a “fully patched” membership. He also discussed the gang’s response to the 2011 melee at a Sparks casino that left a rival Hells Angels leader dead.

A brawny man with a shaved head and a thick salt-and-pepper goatee, Brancato is the first of dozens of witnesses expected to testify in what’s scheduled as a four-month trial for the eight California men.

Brancato, who was introduced to the gang through a confidential informant, talked about Vagos mantras and slogans, such as “we give what we get” and “trust no one.”

Members of the gang earned various patches, which were stitched onto leather and denim vests — or “cuts” — for their length of loyalty and their willingness to commit acts of violence on behalf of the group, Brancato said. He testified that he never committed violent acts while he worked his way to a sergeant-at-arms position.

But his testimony, which is scheduled to resume Monday, could be called into question as the trial rolls on in the weeks ahead and defense attorneys start to cross-examine him.

In 2014, a federal magistrate judge recommended dismissal of felony drug trafficking charges against a former Vagos officer because of outrageous government conduct by Brancato. Two federal judges later refused to throw out the case, saying Brancato did not violate the rights of a defendant during an alleged cocaine transaction.

The start of Brancato’s time with the gang included a 12-page application that asked for work history and criminal history, along with emergency contacts, marital status, education and military background.

“They were shocked that I had no prior arrests,” Brancato said.

Later, when he was arrested for carrying a concealed weapon on his bike in Utah, he said, “I did not come out of role.” A Utah member of the gang who bailed him out of jail expressed surprise that he had no felony record.

Brancato told the bikers that he paid for good lawyers to keep his record clean.

He became a “hangaround” before the Northern Nevada shooting but was not inside John Ascuaga’s Nugget when Jeffrey “Jethro” Pettigrew was killed.

Attorneys for several of the eight men on trial have denied that there was a plan to kill the Hells Angels leader, saying that the Vagos members were responding to “active shooters” in the casino.

Brancato recorded Vagos leaders discussing collecting $300 from each of the more than 1,000 members to help pay for Gonzalez’s defense in a state trial.

Thirteen more defendants are awaiting trial in a case that prosecutors allege involves the Vagos gang and crimes in Nevada, California, Arizona, Hawaii, Oregon and Utah.

Brancato also testified that in early 2013 Vagos leaders planned an attack in New Mexico, where a member had been run over by someone in the rival Bandidos Motorcycle Club. He described a meeting inside a crowded restaurant with a Vagos leader, who passed him a note scribbled on a napkin: “It’s on with the Bandidos.”

The prosecutor asked: “What did you take that to mean?”

Brancato replied: “That we were at war with the Bandidos.”