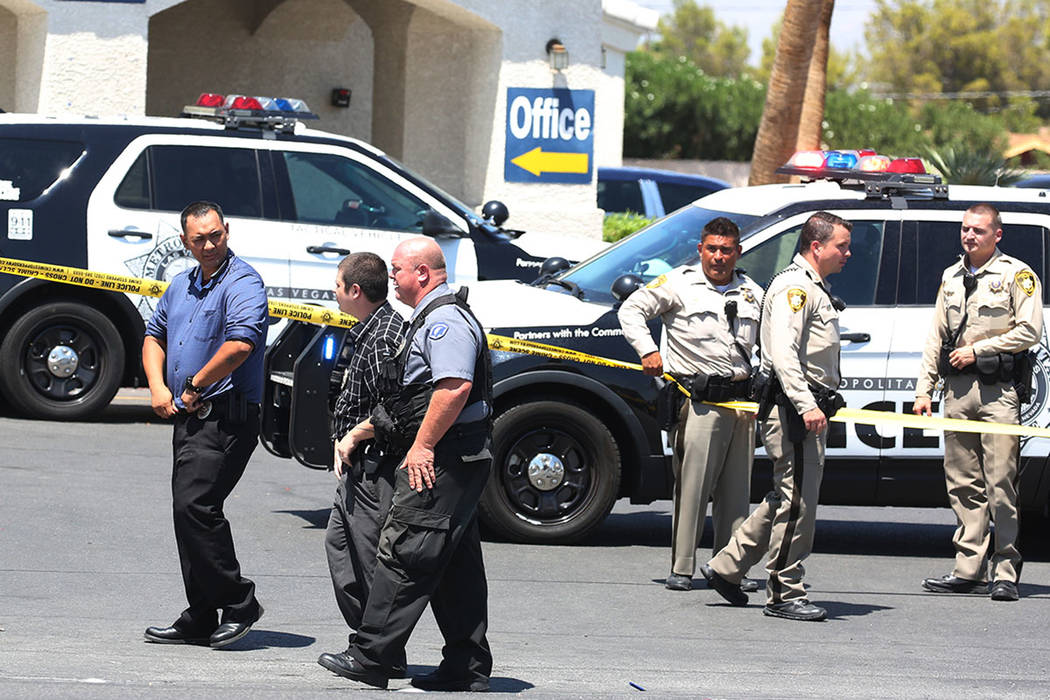 The Clark County district attorney’s office will not pursue criminal charges against a Las Vegas police officer who shot and killed a knife-wielding man in August during a welfare check.

The announcement was made Monday morning during a public fact-finding review nearly a year after Metropolitan Police Department officer Dave Stockton opened fire at 62-year-old Spurgeon Daniels. Such reviews are typically held when the district attorney’s office makes a determination of whether charges will be brought in officer-involved shootings.

As of Monday, Stockton had returned to patrol and was assigned to the department’s Bolden Area Command. At the time of the shooting on Aug. 6, 2018, he was placed on paid leave pending the department’s investigation.

That investigation was led by Det. Marc Colon of Metro’s force investigation team, which is responsible for investigating officer-involved shootings, in-custody deaths and instances of use of force. During Monday’s review, Colon released details from Daniels’ autopsy and toxicology tests, as well as a crime scene diagram showing that there was 4 feet, 4 inches between Daniels and Stockton when he opened fire.

At the time of his death, Daniels had amphetamine, methamphetamine, cocaine, PCP and marijuana in his system. According to Colon, side effects of that drug cocktail could include violence and hallucinations.

On the day of the shooting, Stockton, along with two other officers and one sergeant — all of whom are trained in crisis negotiation — were called at 12:40 p.m. for a welfare check at unit B-229 at the Kensington Suites, 2200 W. Bonanza Road. A security guard at the complex had called 911 to report that Daniels, who had been seen running through the complex naked earlier in the day, was making “vague threats” to hurt himself and others and had barricaded himself inside his apartment using furniture to block the front door.

The guard tried knocking on Daniels’ door but got no answer, and called 911 fearing “something may have happened,” said Colon.

Officers, armed with Tasers, handguns and at least one beanbag shotgun, which is a “low lethal” option, entered the apartment at 12:55 p.m. to find Daniels standing behind a kitchen counter, wearing no pants and holding a utility knife in his right hand.

In body camera footage played during Monday’s review, Daniels can be heard yelling at officers, “I’ve given everyone my mind and my heart.”

As Daniels approached the officers, Stockton twice deployed a Taser, which did not stop Daniels. He then began swinging the knife, cutting one of the officers’ hand.

The officers then backed out of the apartment, yelling at Daniels to drop the weapon, the footage showed. One more officer deployed his Taser while they stood in the doorway, prompting Daniels to charge at Stockton. The officer then shot him in the upper chest and abdomen.

Colon said although officers had the beanbag shotgun, it is likely that Stockton elected to fire his handgun because it is “easier” to deploy, also noting that low lethal shotguns “can become lethal” when shot at close proximity.