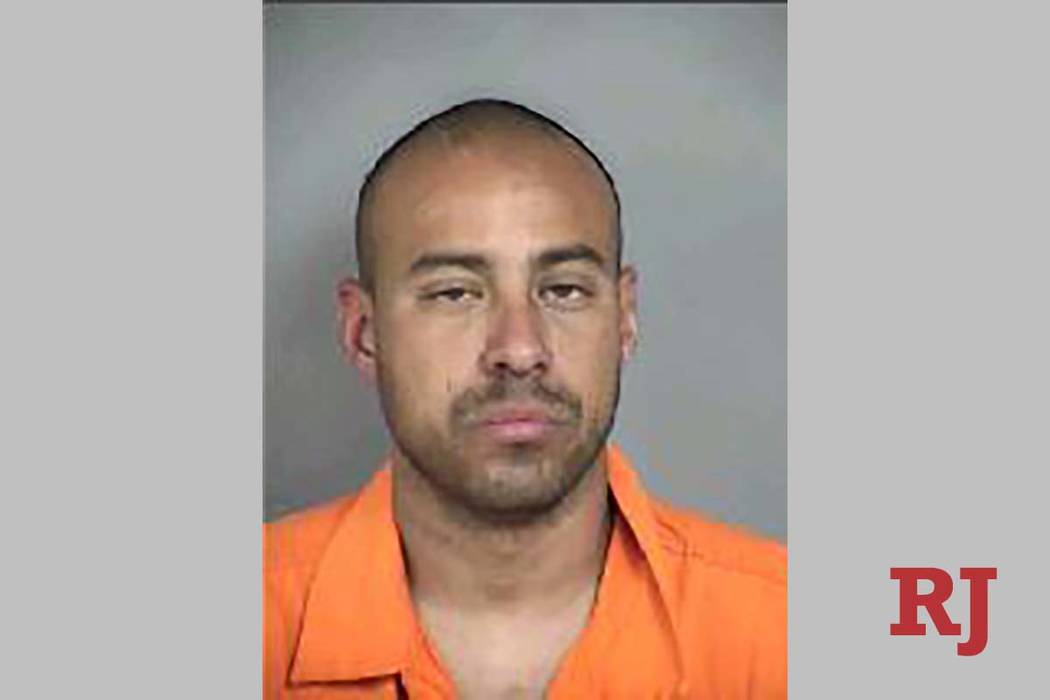 North Las Vegas police have arrested a man accused of fatally stabbing his girlfriend’s ex-husband last week, according to an arrest report.

North Las Vegas Police Department officers arrested Juan Dolores on Saturday. He is facing a charge of murder with a deadly weapon in connection with a fatal stabbing, police said.

According to Dolores’ arrest report, released to the Review-Journal on Tuesday, he got into a fight with his girlfriend’s ex-husband — identified by the Clark County coroner’s office as 41-year-old Angel Arellano — before the stabbing.

Police in a statement said Dolores was 22, but Nevada Department of Corrections records indicate he is 31.

Just after 12:05 a.m. Friday, police were called to the 2800 block of Dogwood Avenue, near Pecos Road and Las Vegas Boulevard North. When officers arrived they found Arellano, of North Las Vegas, lying in a backyard suffering from multiple stab wounds, six of which were to his back, the report said.

He died at the scene, the Clark County coroner’s office said. His death was ruled a homicide.

Dolores’ girlfriend told police that she was in bed when she heard Dolores arguing with her ex-husband in the home. She said she walked out of her bedroom and saw them begin to fight, and she attempted to separate the men, the arrest report said.

Dolores and her ex-husband continued to fight in the backyard, and the woman told police she heard her ex-husband “yell to Juan to back off or he would stab him,” the report said.

When Dolores came back inside he had a large cut on the back of his arm and finger, the report said. The woman’s 16-year-old daughter then went outside to check on Arellano, and began screaming that he “was covered in blood and not responding.”

Dolores left the home, “possibly to go to the hospital for treatment,” and the woman called police, the report said. Hospital records showed that Dolores did not seek help for his wounds.

“In knife attacks it is common for the attacker to sustain cuts to the hand holding the knife,” the report noted.

Court records show that Dolores, who also goes by the name Edvardo Alvares, has been arrested in Clark County multiple times since 2005. He’s plead guilty to charges including robbery with a deadly weapon, battery by a prisoner and fraud.

His most recent sentence, on a charge of false representation to defraud, ended on September 2019, according to Department of Corrections records

North Las Vegas police, with the help of the FBI’s multi-agency Criminal Apprehension Team, arrested Dolores on Saturday in the southeast valley on the 5000 block of Boulder Highway, police said. He remained in the Las Vegas City Jail on Tuesday with bail set at $1 million, court records show.

Arellano’s death marked the third homicide investigated by North Las Vegas police this year, according to records maintained by the Review-Journal.