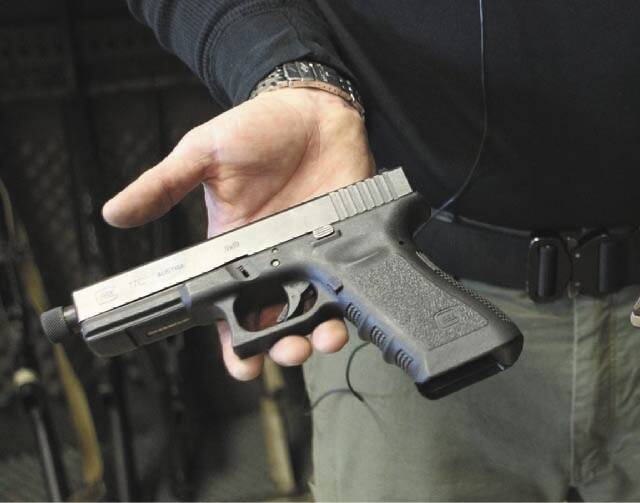 A Las Vegas man who had prior felony convictions for drug trafficking was sentenced to four years and nine months in federal prison after he unlawfully possessed a Glock handgun modified to fire like a machine gun and some so-called ghost guns.

Womack, who had prior convictions for corporal injury on a spouse or inhabitant and evading a police officer in addition to convictions for trafficking cocaine and methamphetamine, was sentenced Wednesday, according to the announcement from U.S. Attorney Jason Frierson.

According to Frierson’s office, Womack pleaded guilty to being a felon in possession of firearms and illegal possession of a machine gun.

Womack had six guns on Oct. 5, 2020, in the desert near Sloan, prosecutors had alleged in court. One of those guns was a Glock 22 that had been modified to spray bullets at a rate of 1,100 rounds per minute with a single trigger pull. That weapon had a 31-round capacity magazine.

The Review-Journal reported when Womack pleaded guilty in August that he had used a Glock that was fitted with a quarter-sized device known as a “Glock auto switch.” The device converts Glock handguns to full automatic mode.

Womack also had a short-barreled rifle as well as what prosecutors described as “unserialized Privately Made Firearms (PMF), sometimes referred to as ‘ghost guns.’” The specific number of ghost guns Womack had in his possession wasn’t provided in the announcement.

Because they have no serial number, those guns are untraceable. They are often homemade and manufactured with a 3D printer.

The Bureau of Alcohol, Tobacco, Firearms and Explosives and the Las Vegas Metropolitan Police Department investigated the case, while Assistant U.S. Attorney Dan Cowhig prosecuted it, Frierson said in the announcement.