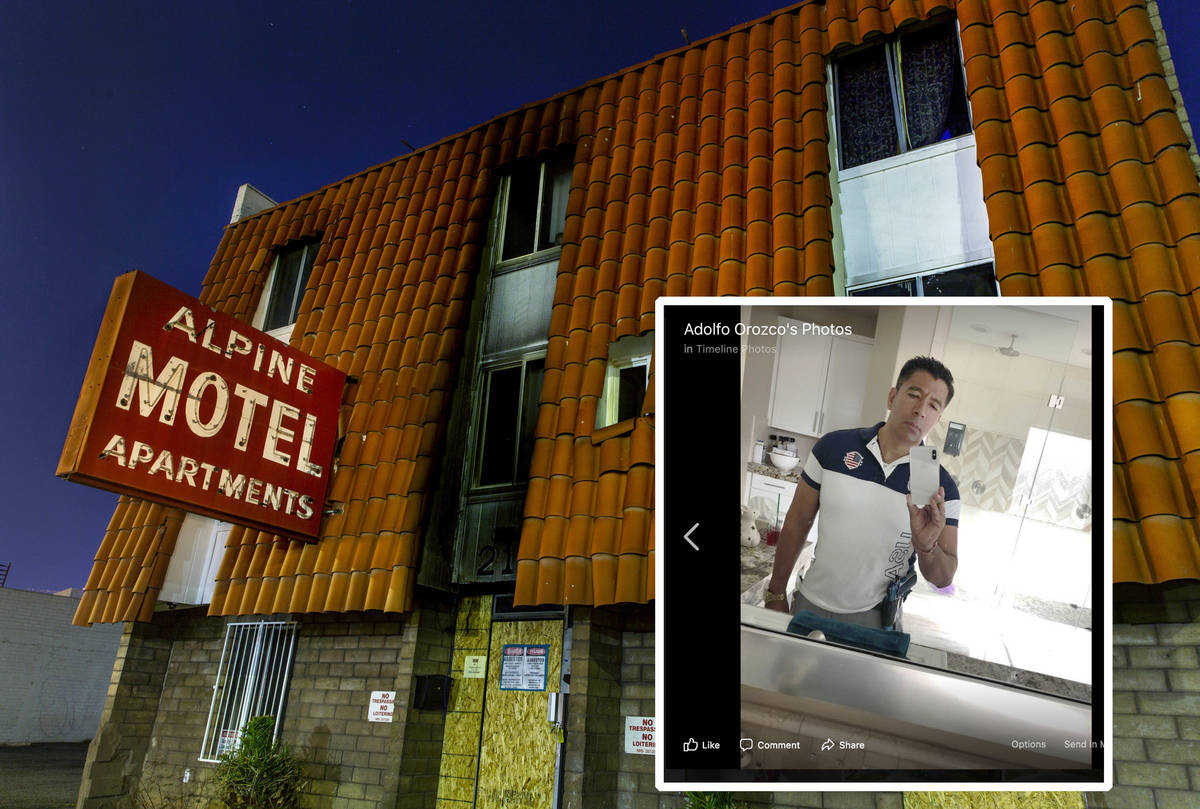 Months before the fatal December fire at the Alpine Motel Apartments, federal agents looked into motel owner Adolfo Orozco, as part of a drug and cartel investigation. (Exterior photo of the Alpine by L.E. Baskow/Las Vegas Review-Journal) @Left_Eye_Images 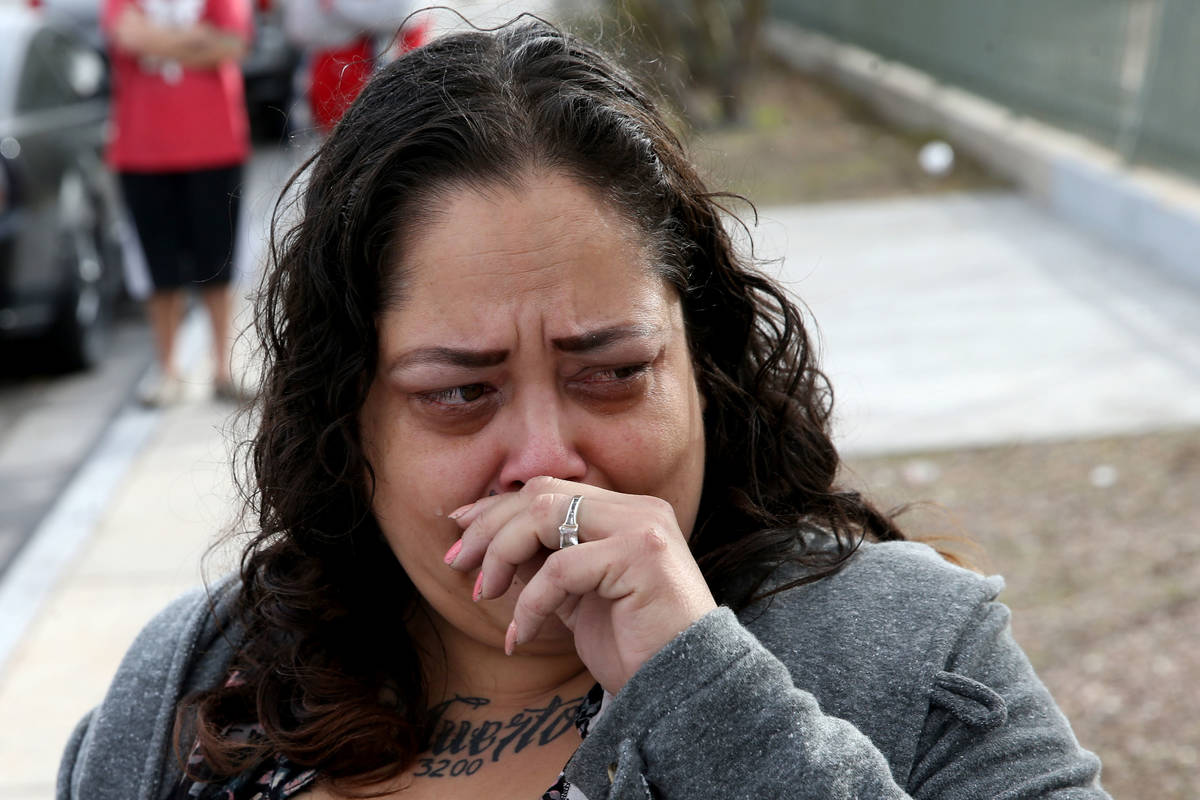 Alpine Motel Apartments co-owner Malinda Mier cries while telling the story of her maintenance man who may be among the dead after a fire left 6 dead and 13 injured at the downtown Las Vegas apartment building Saturday, Dec. 21, 2019. (K.M. Cannon/Las Vegas Review-Journal) @KMCannonPhoto 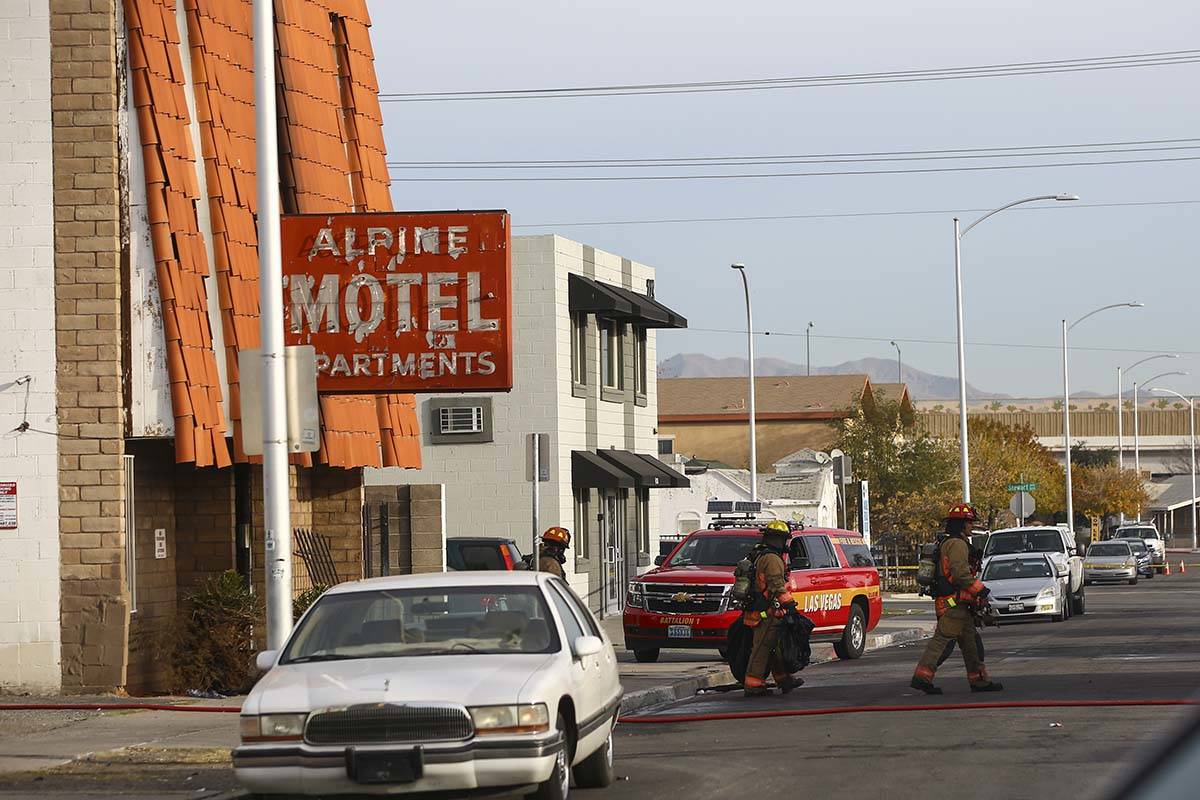 Authorities filed involuntary manslaughter charges Thursday against Adolfo Orozco, the landlord of a Las Vegas apartment building where six people died in a December fire, and a purported co-owner of the building.

Clark County District Attorney Steve Wolfson said a long list of counts was filed against Orozco and Malinda Mier, who has claimed co-ownership of the Alpine Motel Apartments.

Prosecutors said that once an investigation into the December fire began, Orozco threatened the apartment’s manager and his fiancee and tried to convince them not to talk to detectives “by brandishing a modified AK-47 style assault rifle and offering money” for them to leave town.

Along with one count of manslaughter for each of the six victims, Orozco and Mier also face 15 counts of performance of an act or neglect of duty in disregard of safety resulting in substantial bodily harm or death. Orozco also faces four counts of preventing or dissuading witness or victim from reporting crime or commencing prosecution with use of a deadly weapon. All charges are felonies.

“If these defendants had responsibly maintained the property, these six victims would be alive today,” Wolfson said in a news release. “Their intentional disregard for the proper maintenance of fire alarms, fire exits and the heating system for the units directly contributed to the tragedy we saw on December 21, 2019. They had a responsibility to provide a safe environment for these people, and they failed to do that.”

Orozco’s lawyer, Dominic Gentile, declined to comment on the criminal charges. Court records did not indicate whether Mier had hired an attorney.

In December, Mier identified herself to the Review-Journal as a co-owner of the property. Prosecutors called her an “associate” of Orozco.

‘Disregard of the safety’

Mier claimed that the building was up to code as set forth by the city, but she was not sure whether the building had a sprinkler system. She said shortly after the fire that each room had a smoke detector and there was a “fire escape” on the front of the building.

But in the criminal complaint filed Thursday, prosecutors detailed how “willful and wanton disregard of the safety” of people who lived at the apartment building led to the fire.

Orozco and Mier failed to replace or fix a back door exit, didn’t replace a busted fire alarm panel, “thereby preventing any audible alarms from sounding during the fire and preventing the notification of the fire to the fire department and alarm company,” the complaint alleged.

They also didn’t fix inoperable automated fire doors, the complaint stated, and failed to provide proper heating systems in the apartments, “causing tenants to have to use ovens or stoves as a heating source.”

Large items blocked hallways and exits, and broken smoke detectors and lights were not replaced, the complaint continued.

Orozco is also the center of a civil lawsuit filed by fire victims and their families. In separate court briefs filed this week, Tracy Eglet, a lawyer for many of the fire victims, asked a judge to stop Orozco from trying to sell off his other properties, alleging that he has sold two since June 3.

Eglet wrote that Orozco has three other properties listed for sale, and the victims are worried that if a judge doesn’t stop him from selling anything worth more than $25,000, he could profit off the other properties and deplete his assets.

Authorities raided the property manager’s office and live-in unit in the days after the blaze. Investigators seized a computer as well as binders and a filing cabinet of paperwork inside the unit where manager Jason Casteel lived with his fiancee.

Other records reviewed by the Review-Journal showed that Orozco and his properties were part of a 2019 Homeland Security investigation into drugs, guns and money laundering linked to the Mexican Mafia and unnamed cartels.

Orozco, a former teacher who has been described as “extremely private,” oversees a multimillion-dollar portfolio, which he amassed with his wife and four companies tied to them. That includes apartment and hotel buildings stuffed with studios, pockets of rental homes and a 6,250-square-foot mansion where the couple appear to live

Three years before the deaths at Alpine, police worked to get the downtown property shut down as a chronic nuisance, city records show.

A Review-Journal investigation showed the property was the subject of repeated code enforcement inspections and failed fire inspections between 2013 and 2017, yet had not been inspected by fire officials in the 32 months leading up to the fire.

At the time of the fire, a rear exit door on the first floor of the apartment building was bolted shut from the outside, leaving some residents trapped. Others upstairs, choked by overwhelming smoke, resorted to jumping from second- and third-story windows to get out, including DeJoy Wilson, who at the time was three months pregnant.

In post-fire inspections of the property on Dec. 22 and 23, inspectors noted more than 40 fire code violations, including the sealed exit door, a defective fire alarm system, vending machines that blocked exit pathways and security bars in a sleeping area that had no emergency release.

After the fire, the Alpine was burglarized three separate times, according to a lawyer for the business.