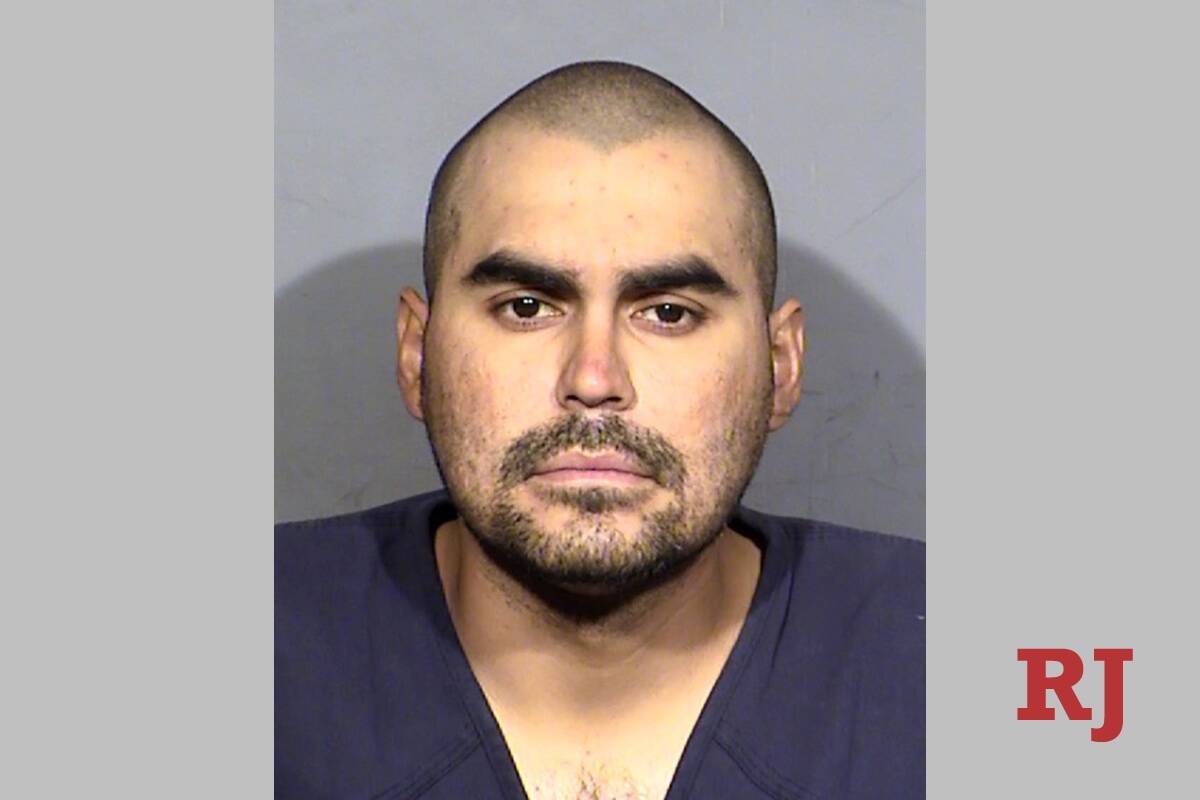 David Valle, 28, was shot in the leg by a home's resident after he allegedly broke into the home, Las Vegas police said. (Metropolitan Police Department)

A man who broke into a west Las Vegas Valley home and was telling the residents, “Let me in, I will kill you all” was shot in the leg by a resident of the home, according to a police arrest report.

And the aftermath of the shooting was caught on video, with a neighbor recording footage of the wounded man writhing in pain on the lawn after being brought out of the house by police.

“I think everybody’s kind of shocked about what happened,” said Heath Horvat, 50, the next-door neighbor who recorded the video, speaking of the bizarre incident in the usually quiet, tight-knit neighborhood near West Sahara Avenue and South Hualapai Way.

According to the Metropolitan Police Department, officers responded to a burglary call just before 5:30 a.m. on Saturday.

The man, later identified as David Valle, 28, was trying to break into the second-floor master bedroom, according to the arrest report.

The residents of the home, whose names were redacted from the arrest report, told police in an interview how the terrifying ordeal played out.

A man who lived in the house was awoken by a “loud, breaking sound” and saw his wife, who was telling him to call police, at the bedroom door. The man helped his wife barricade the door, then went to a safe to get a handgun. A daughter was also in the bedroom.

On the other side of the door was a strange, shirtless man who had come up the stairs armed with a knife.

Armed with the handgun, the man who lives in the house fired a “warning shot into the ceiling and then fired a shot through his bedroom door at the subject attempting to strike the unknown individual’s leg,” the arrest report stated.

At one point during the break-in, police said, Valle was banging on doors in the house and yelling, “Come out, come out, you are running out of time. There are bombs all over the house.”

An arriving officer heard a gunshot, ran to the front of the house, kicked in the front door, and announced himself as a Metro officer. He climbed the stairs while hearing yelling and screaming, the arrest report said.

Once he reached the top of the stairs, the officer saw the man later identified as Valle bleeding from his left leg.

Video recorded by Horvat shows two police officers guiding a handcuffed Valle, who was bleeding from his knee, down to the grass.

“It’s just that we have a great community and it was just surprising that it happened there,” Horvat said. “I don’t feel, like, less safe. I think people need to realize that crime is everywhere now.”

Valle was taken to University Medical Center with a shattered tibia.

A preliminary hearing is set for Nov. 9, court records show.