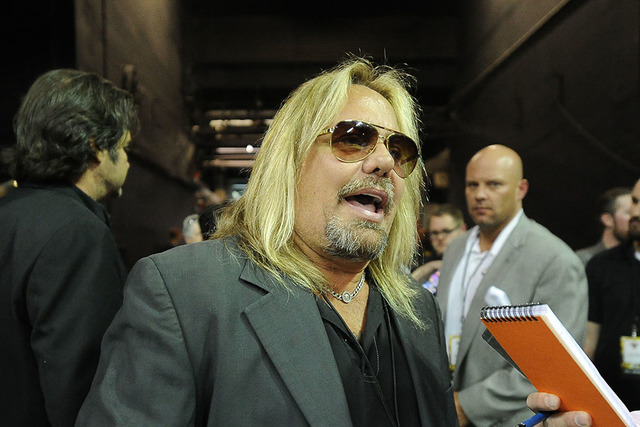 Vince Neil is seen before the start of a Las Vegas Outlaws arena football game at the Thomas & Mack Center in Las Vegas on May 4, 2015. (Josh Holmberg/Las Vegas Review-Journal)

As part of an agreement with prosecutors, Neil, 55, is expected to pay a $1,000 fine, take an online impulse-control counseling class and stay out of trouble for six months, his attorney, Richard Schonfeld said.

“Mr. Neil was pleased to put this behind him,” Schonfeld said.

Should Neil, whose court appearance was waived after he signed a written agreement, fail to comply with any of the conditions of the agreement, he could face 120 days in jail.

TMZ posted a video of Nicolas Cage tussling with Neil after the actor reportedly tried to intervene during the April 7 incident.

A criminal complaint identifies the autograph seeker as Kelly Guerrero and accuses Neil of “pulling the victim’s hair and slamming her to the ground.”

In a federal lawsuit, Guerrero, a nurse from Santa Cruz, California, alleged an “intoxicated” Neil pulled her by the hair to the pavement at the Aria entrance in front of Cage and comedian Carrot Top.

Guerrero and her Santa Cruz lawyer, G. Dana Scruggs, are seeking more than $75,000 in damages from Neil for allegedly subjecting her to emotional distress in the presence of her 14-year-old son.

The rock singer’s actions are described in the lawsuit as “outrageous” and “intentional” and part of an “ongoing pattern and practice of drunken, out-of-control violent and dangerous conduct.”