A dispute over $40 worth of marijuana and methamphetamine led to one man being shot repeatedly in central Las Vegas and another jailed on an attempted murder charge, police said.

Adrian Sanders, 26, was arrested in the Sept. 6 shooting at an apartment complex on the 3800 block of Cambridge Street, near East Katie Avenue. An arrest report for Sanders states that police responded to the complex at 6:40 p.m. and found a man suffering from multiple gunshot wounds.

The man survived, then told police from his hospital bed he was shot by Sanders in an ongoing argument over a small amount of drugs.

“He (the victim) stated that two days ago he got into an altercation with his friend who he only knows as ‘AD’, who was later identified as Adrian Sanders,” police wrote in the report. “He owes Adrian $40 for marijuana and methamphetamine and that was what the argument was about.”

The victim said that two days before the shooting Sanders pointed a gun at him. On the day of the shooting, he went to Sanders’ apartment “to try and resolve the issue and to also try and get more narcotics from him.”

Police interviewed Sanders, who told them he was only selling cigarettes in the complex. The victim, he said, regularly came to his apartment at 2 a.m. “harassing him for cigarettes,” according to the report. A dispute led to the victim pointing a gun at Sanders weeks earlier, he said.

“Sanders said he was tired of being bullied by (the victim) and he was scared for his life, so he raised his firearm that he was holding and shot one round through the front glass window of his living room, out towards where (the victim) was standing,” police said.

The man then fired five to six more rounds at the victim, police said.

Sanders is charged with attempted murder with use of a deadly weapon and discharging a gun in a prohibited area. A preliminary hearing in the case is scheduled for Sept. 28 in Las Vegas Justice Court. 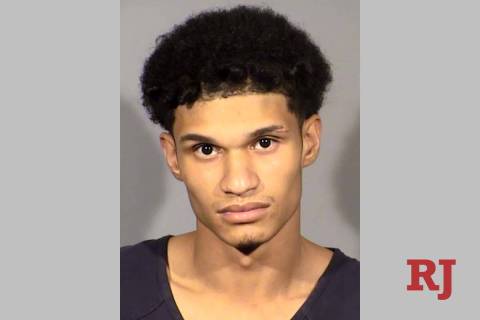