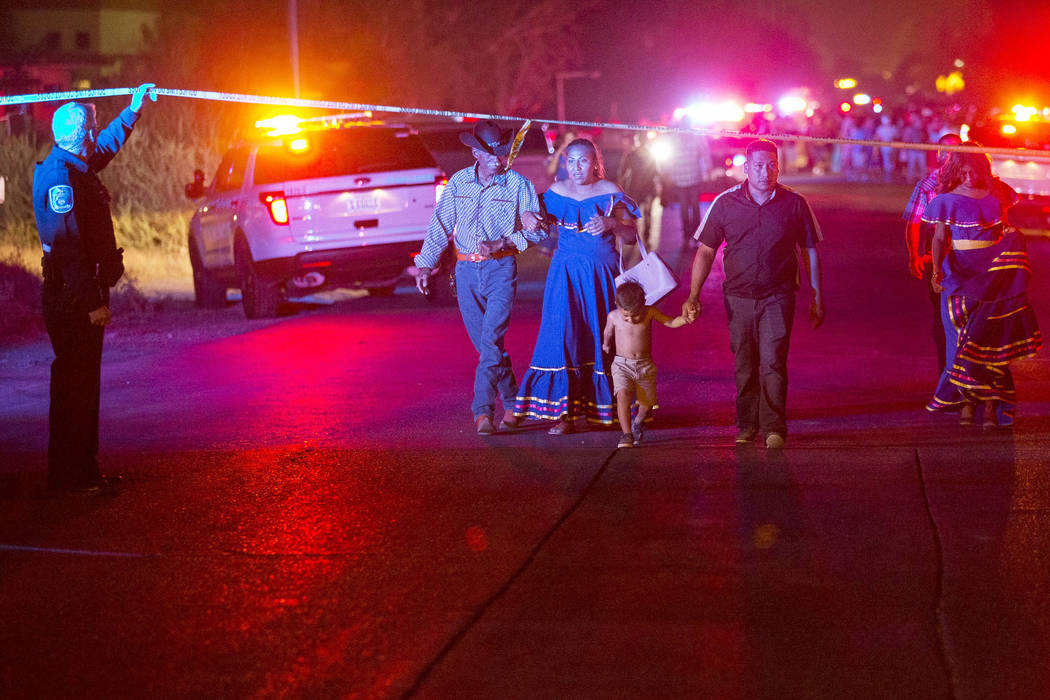 People leave the scene of a shooting that broke outside a party near Allen and Coran lanes in North Las Vegas on Saturday, Aug. 4, 2018. (Richard Brian Las Vegas Review-Journal @vegasphotograph)

Six people, including an 11-year-old girl, were shot Saturday night at a home in North Las Vegas, police said.

The shooting happened about 10 p.m. at a house party attended by a few hundred people near Coran and Allen lanes, North Las Vegas police spokesman Aaron Patty said. All six shot were transported to University Medical Center and are expected to survive, according to a release.

“This is something that we never want to see, but we feel fortunate in that although still severe, that folks are walking away with nonlife-threatening injuries,” Patty said.

The male shooter was not in custody as of Sunday afternoon, the release said.

Police detectives do not believe the shooting was a random act of violence, the release said.

Many gathered outside police tape Saturday night, sitting with family members, including young children. Among them was Mayra Fuentes, who was with several relatives.

“It’s just scary to think that anybody has the heart to do something so hateful,” said Fuentes, wiping away tears. “And you see kids. Why would you even start shooting?”

Fuentes, 32, said she and her relatives were at the party and celebrating a religious event in the yard when she heard gunshots. The two ducked behind a car, and her brother called 911 after he heard a girl say she was shot in her leg.

Fuentes didn’t recall how many gunshots she heard.

Police are asking anyone with information about the shooting, especially those with video, to call the North Las Vegas Police Department at 702-633-9111 or leave an anonymous tip with Crime Stoppers at 702-385-5555.