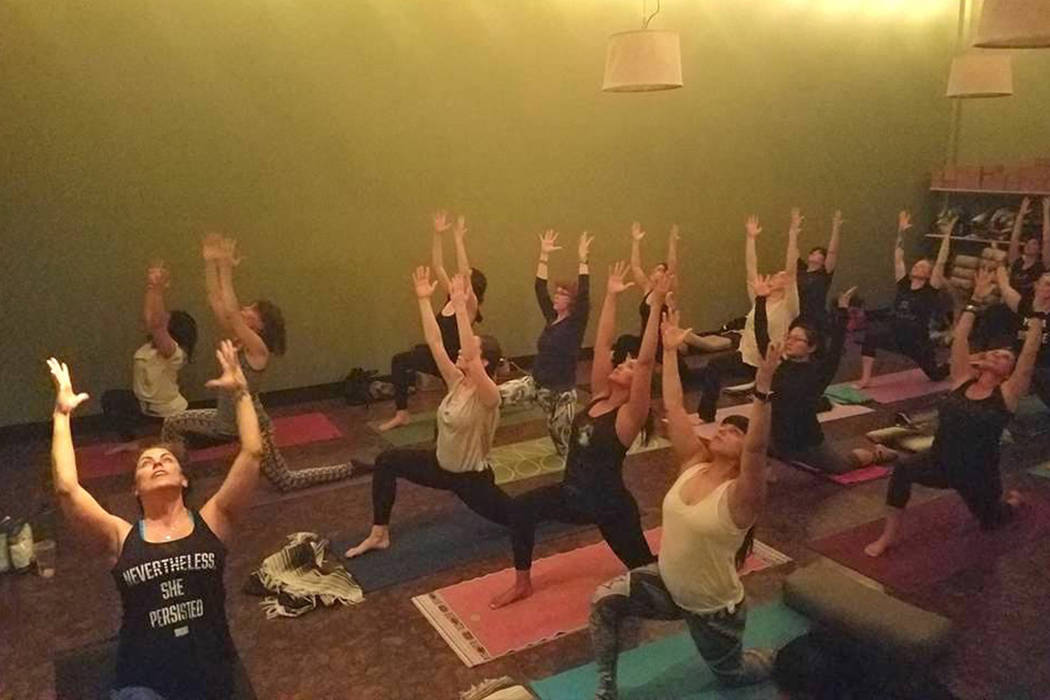 When Joyce Bosen was diagnosed with post-traumatic stress disorder in 2012 after losing her son, a doctor prescribed medication.

When it didn’t help, she turned to yoga.

Now she’s helping the first responders who saved lives the night of the Oct. 1 shooting and Clark County coroner’s office employees who dealt with its horrific aftermath find their way to recovery through the ancient physical and spiritual practices.

“It was created to help people to self-regulate after trauma, to help them feel safe,” Bosen said. “It doesn’t push people past their comfort zone.”

That means no hands-on teacher guidance, no “om”s or chanting and no music. Nothing that could trigger a trauma response. Instead, participants perform yoga poses and practice breathing and grounding techniques.

Five days a week, three times a day, Bosen and her trained teachers help employees of the Clark County coroner’s office and first responders — including firefighters, emergency medical personnel and police — de-stress through yoga. Desks and chairs are pushed against the walls of a training classroom at the coroner’s office to make room for a handful of purple mats.

The sessions, which include guided meditation, are free to the attendees.

“When you get 58 victims and one suspect all coming at once, you can imagine there’s not a lot of sleep going on and just exhaustion,” Clark County Coroner John Fudenberg said of his employees. “You put that stress in combination with the exhaustion, and it’s just a very difficult process on them.”

Fudenberg said he attends the yoga classes almost daily. He also tried meditation — though he was skeptical of its potential benefits.

He said the sessions have helped him. The first week after the shooting , he said, he only slept for an hour or two nightly. Now he’s back to a normal sleep cycle.

The health benefits of yoga are gaining wider acceptance. Research released by Georgetown Law’s Center on Poverty and Inequality in April showed yoga and mindfulness could improve physical and psychological health outcomes for girls. The study also found yoga helped improve the coping skills and emotional responses of children and led to healthier parenting and relationships.

“We incorporate positive affirmations, breathing techniques and self-regulation throughout the practice,” Bosen said. It could even help first responders understand the self-help tools available to prevent a trauma response during a tragedy, she said.

Because of the popularity of the sessions, Fudenberg said he’d like to make the yoga and meditation classes permanent, though perhaps less frequent. Maybe the offer will be extended to family members, he said.

For Bosen, leading classes in the techniques that helped her heal is a different kind of reward.

“It’s as if I took the medicine and I want to share it.”