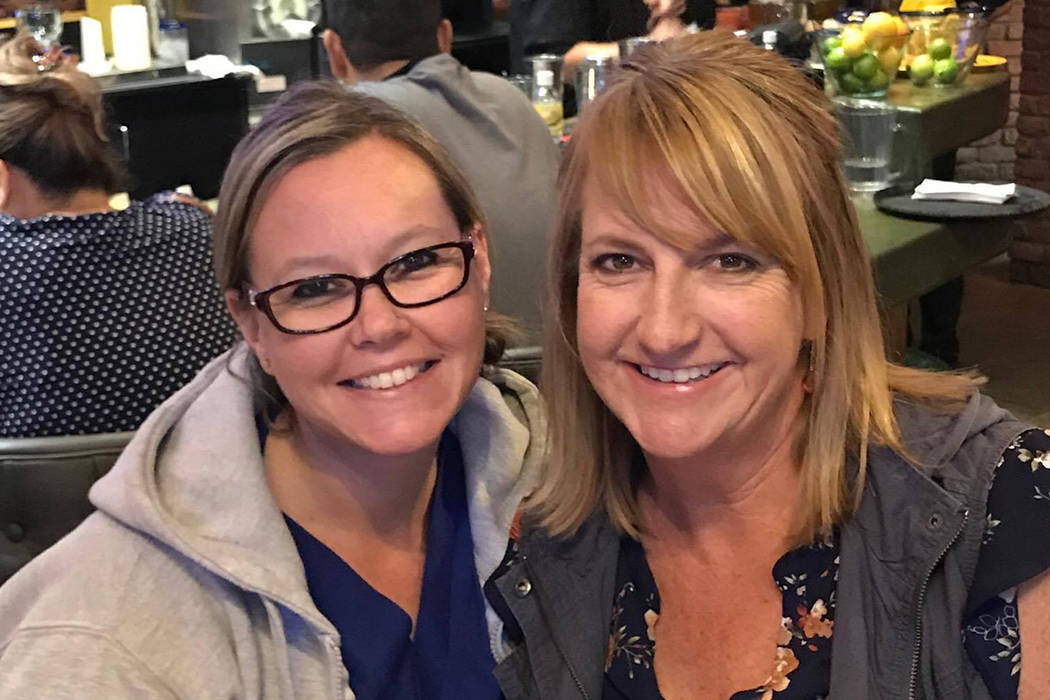 Hailey Holiday, left, and Heidi Benson met for dinner on Tuesday. The two friends have stayed in touch since they both attended the Route 91 Harvest music festival targeted in the Oct. 1 Las Vegas Strip shooting. Hailey Holiday 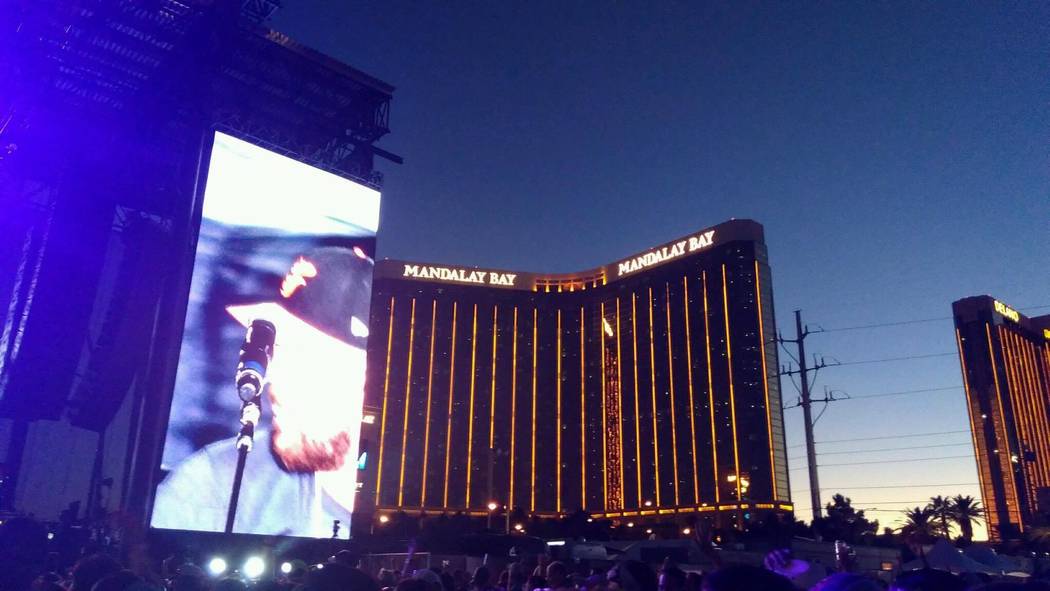 T.J. Osborne of the Brothers Osborne plays the first night of the Route 91 Harvest music festival. Two days later, a shooter firing from the Mandalay Bay would kill 58 people and injure over 500 concertgoers. Heidi Benson 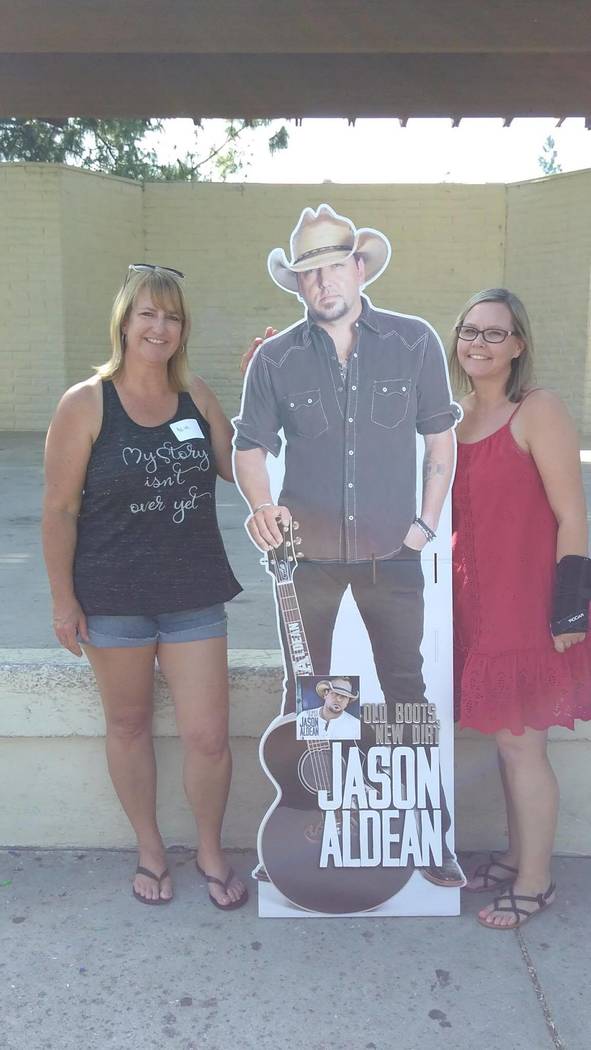 Less than an hour before the first bullets hit the concert grounds, Heidi Benson reunited with a friend she hadn’t seen in six years.

Benson, 48, and her boyfriend found a good place to watch the final moments of the Route 91 Harvest music festival. She spotted a familiar face.

It was Hailey Holiday, 40, who lived about 15 minutes from Benson in Riverside County, California. Benson was surprised to see her.

The two women hugged. They updated each other on their children — Holiday’s four kids ranging in age from 23 to 14, Benson’s son and twin daughters, whom she’d called that morning to wish a happy 25th birthday.

In less than an hour, they’d be separated again, fleeing the deadliest mass shooting in modern American history.

Like other modern friendships, they’d maintained theirs over six years through social media.

Though they lived close by, their schedules kept them from getting together. Benson taught special education. Holiday was a stay-at-home mom.

Back at the music festival, Holiday invited Benson to join her group in getting closer to the stage for Jason Aldean’s performance. Benson declined.

A half hour into Aldean’s set, Benson heard a sound like firecrackers. Her boyfriend, Shawn Ritchey, grabbed her. They ran, jumped a fence, became some of the first people to escape.

Meanwhile, Holiday’s fiance, Patrick Lynch, threw her to the ground and covered her.

Holiday and Lynch ran during a break in the shooting. A boot crushed Holiday’s foot on the way out. They passed people bleeding, screaming. Holiday said the Lord’s Prayer aloud. Some asked her to stop. Others joined.

Both women ran north, passing Tropicana and the Hooters Hotel, but never crossed paths in the chaos. Both women thought of their children.

Benson’s night ended at a Shell gas station around 11:15 p.m. She and her boyfriend called a ride to their hotel.

Both women decided to return to work when they got back to Riverside County.

At school two days after the shooting, Benson’s 9- and 10-year-old students each hugged her.

In the days since, she’s excused herself from class when she needs a moment. A school counselor often checks on her. The recent news of a terror attack in New York and a mass shooting near San Antonio has made Benson think she should return to counseling sessions.

Holiday, who started nursing school earlier this year, returned about three days after the shooting. Alarms and sirens at her hospital make her nervous. She fears tight spaces. An instructor sometimes tells her to take breaks and walks to calm down.

“They’ve been very receptive to my pain,” she said.

Holiday’s temper seems shorter. She’s more irritable, prone to arguments. She’s tried to ignore the pain in her foot. She thinks visiting a doctor will keep her from her education.

“There’s no time,” she said. “That’s what I’m struggling with the most.”

Holiday and Benson have been comforting resources for each other. They meet at least once a week and send text messages daily.

Holiday has invited Benson and Benson’s boyfriend to church. About eight other Route 91 survivors came to a group counseling session held there.

Benson and Holiday attended an October picnic hosted by fellow survivor AJ Hillmann. About 355 people showed up, Hillmann said. About 90 percent of them had attended the concert.

Holiday has thrown herself into her studies. She expects to graduate in August. She believes she survived the event for a reason — to become a nurse and help others.

“Tomorrow is not promised,” she said. “I could have never come home.”

Benson returned to Las Vegas recently to retrace her steps from Oct. 1. She said it helped with her healing process, like when she receives messages from Benson that read, “I love you.”

“It’s sad that this has brought us closer,” Benson said. “But I feel very blessed.”