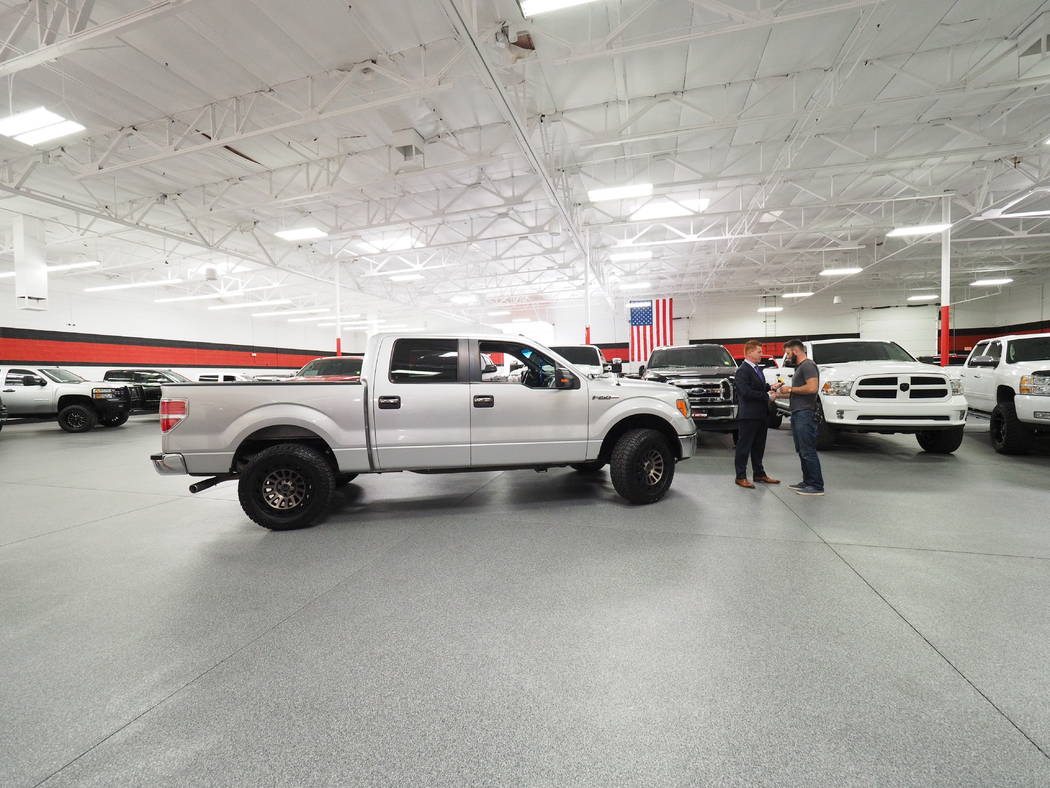 B5 Motors owner Shane Beus in Gilbert, Arizona, presents Taylor Winston, 29, with a 2013 F150 truck. The Marine veteran was attending the Route 91 Harvest Festival concert when shooting broke out. He stole a truck to rescue injured people and made several trips to Desert Springs Hospital Medical Center.

The last time Taylor Winston was in Las Vegas, the 29-year-old Marine veteran was shuttling shooting victims to the hospital — in a stolen pickup truck — following the Route 91 Harvest festival shooting.

This time, Winston drove his own truck — a $20,000 Ford F-150 pickup presented to him Monday by a Phoenix-area used-car dealer who wanted to thank him for his selflessness.

“Our first stop is Vegas,” Winston said after picking up his pickup from B5 Motors owner Shane Beus in Gilbert, Arizona.

Along with visiting more shooting victims in Las Vegas, he and girlfriend Jenn Lewis planned to “go back for a day and hang out” before heading to Nashville, Tennessee, for a friend’s wedding.

Next week, Winston hopes to resume his everyday life in San Diego’s Ocean Beach, a “very eclectic” neighborhood with “a strong sense of community.”

That sense of community took hold when shots rang out Oct. 1 at the Route 91 Harvest music festival.

“At first I was definitely terrified,” Winston recalled in a telephone interview, describing “a hectic and chaotic situation” where “you don’t know what to think.”

As he and others ran toward an eight-foot back fence, however, Winston’s military training “kicked into action” and he formulated “a game plan to go check the vehicles” to see if one had keys in the ignition. “I was positive one would have keys.”

Like something “out of a movie,” the first pickup he tried did. Even better, “it was an extended cab and had a long bed. I didn’t plan for that. It was a series of fortunate events.”

Altogether, Winston and Lewis drove about a dozen victims — 10 to 15, he estimates, because he doesn’t remember the exact number — in two trips to Desert Springs Hospital Medical Center.

“After the initial terror, people were thanking me” and remarking “just how calm I was,” saying “‘This guy had to be military,’ he noted. “They told me they felt safe just being around me.”

During his five years as a Marine, “I saw a few things,” Winston said, “but I can’t even compare this situation with war. It’s like shooting fish in a barrel — and the fish don’t even know what’s happening.”

After transporting victims to the hospital, “I was overjoyed with happiness to see them alive,” he added.

Winston said he’s also grateful for the “outpouring of love and people trying to give me things” to salute his actions.

“I wasn’t expecting anything, honestly,” he commented.

Now that Beus has given him the keys to his silver 2013 F150, Winston plans to sell his old pickup and donate the proceeds to the shooting victims.

“I don’t even care if it’s my story,” Winston said. “Just having a positive story on social media in the darkness — it’s almost my duty to take charge.”

After such a life-changing experience, however, Winston has no plans to stop attending events such as the music festival..

“Moving forward, we’ll probably be at Route 91 at the same place,” he said. “Yes, we probably will be a little afraid — but it’s not going to stop us.”