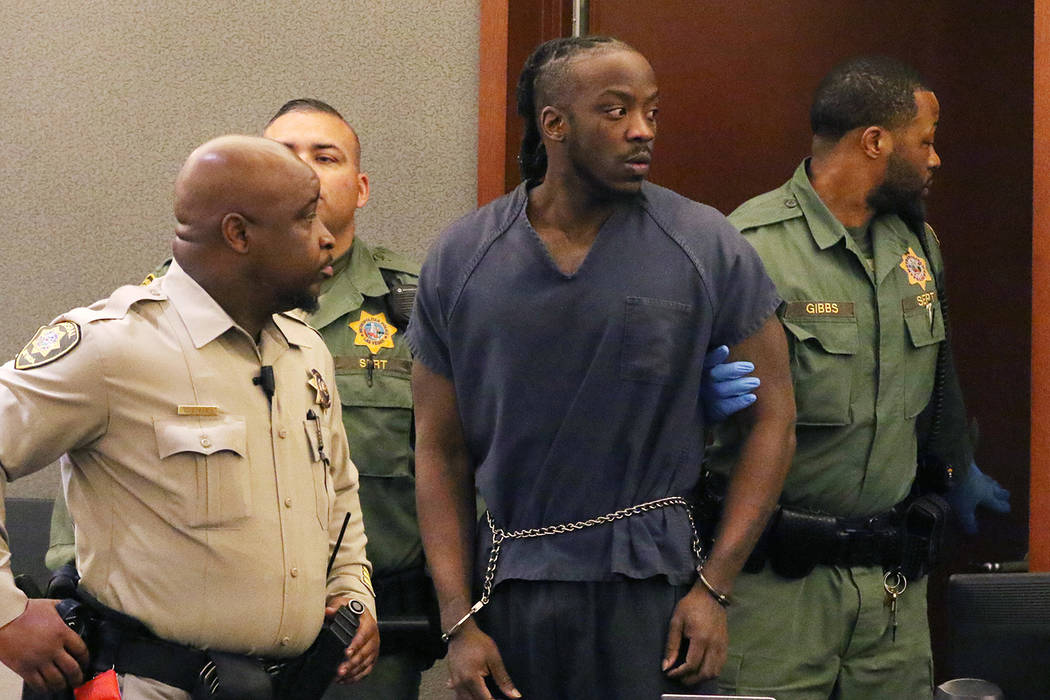 Durwin Allen, charged in the killings of Myron Manghum, 33, and Alyssa Velasco, 27, led into the courtroom at the Regional Justice Center on Tuesday, Feb. 4, 2019, in Las Vegas. (Bizuayehu Tesfaye/Las Vegas Review-Journal) @bizutesfaye 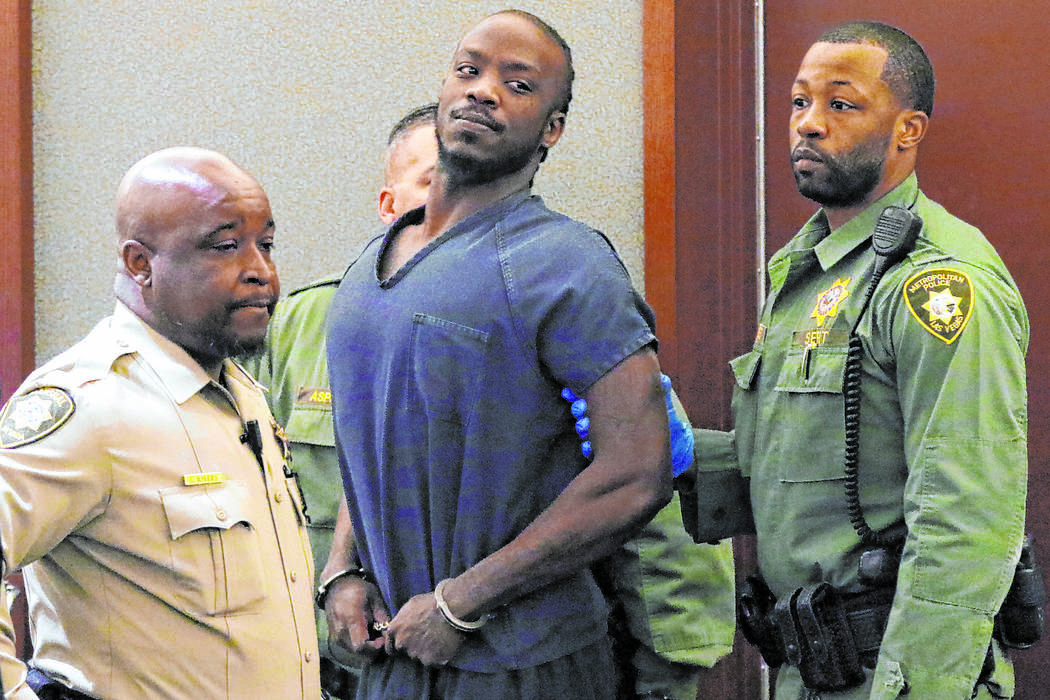 The defendant, 34-year-old Durwin Allen, walked out of the Clark County Detention Center on Monday, less than two weeks after the trial was postponed, with a capital murder charge still hanging over his head.

Both men are expected to face the same judge this week, the victim in jail garb and shackles, the defendant wearing street clothes and an ankle monitor.

Prosecutors want to keep the 29-year-old Brooks behind bars until he testifies under oath.

He was arrested last week in Texas on what’s known as a “material witness warrant,” and quickly returned to Nevada. On Tuesday, District Judge Michael Villani, who ordered the defendant released to house arrest, is expected to decide whether Brooks should remain in custody.

The judge also is scheduled to hear arguments Wednesday on whether prosecutors can take the unusual step of obtaining Brooks’ testimony through a deposition or must wait until trial, a date for which has not been set.

Lawyers for Brooks, Robert Draskovich and Michael Horvath, told the Review-Journal: “We’re deeply concerned about his in-custody status. The facts surrounding his failure to appear are questionable, and the legal authority to authorize his in-custody status is dubious at best. We’ll be seeking his immediate release.”

Prosecutors are concerned that Brooks “may not attend trial, that his testimony is material, and that it is necessary to take his deposition in order to prevent a failure of justice,” court briefs filed last week stated.

Though prosecutors have said that Brooks remained cooperative for roughly three years while Allen remained behind bars, the witness failed to show up to court as lawyers were set to pick a jury in Allen’s trial late last month. When prosecutors asked to continue Allen’s trial, the judge ordered him to house arrest.

That’s when prosecutors sent investigators on a hunt for Brooks, whom they found in Texas, court papers indicated. As police approached him, he tried to run.

Allen and 34-year-old Terrell Stewart, who also is awaiting trial, were charged with murder in the January 2017 killings of Myron Manghum, 33, and Alyssa Velasco, 27, who were found dead in an apartment north of downtown. Manghum died of a gunshot wound to the head, police said at the time. Velasco died of gunshot wounds to the head and neck.

Before shooting Velasco, prosecutors have said, Allen turned toward Brooks and fired, striking him in his hands.

“At one point, Johnny Brooks played dead as both Durwin Allen and Terrell Stewart came toward him,” court briefs state. “As Durwin Allen pointed the gun at Johnny Brooks’ head, Alyssa Velasco, who was in the back bedroom, came out of the bedroom and started to scream.”

As the killers ran toward Velasco, prosecutors wrote, Brooks “fumbled to open the front door” and “ran down the street, knocking on doors and windows for help.”

Brooks showed up for a preliminary hearing in May 2017, which could have preserved his testimony for the record, but Allen and his lawyers waived the hearing.

Prosecutors said that before Brooks was arrested last week, they last had contact with him in December.

“Johnny Brooks’ statements to detectives were corroborated by physical evidence and by video surveilllance,” prosecutors wrote. “He is the only witness to many of the facts, and certainly the most important witness. … Certainly it would be a miscarriage of justice for defendant to avoid prosecution in this case.”

Before granting Allen’s release, Villani expressed concern for the defendant’s safety on the streets.

Prosecutors are expected to ask the judge to order Allen back into custody at Wednesday’s hearing.