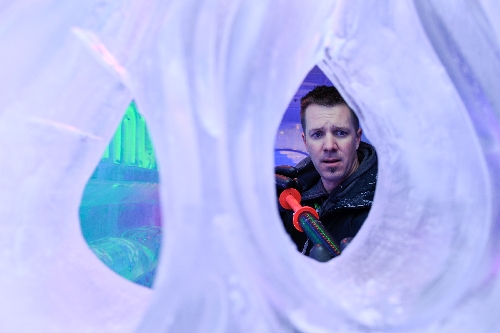 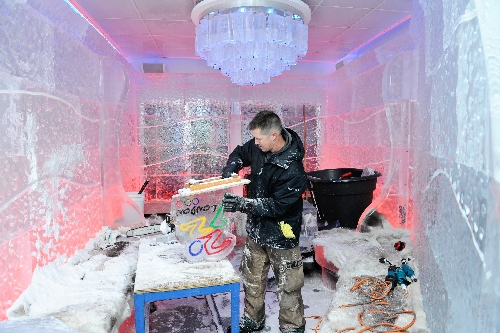 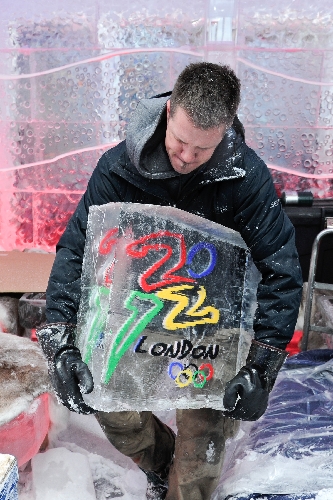 He moved from Colorado, where the winters are cold and white, so he wouldn’t have to shovel snow.

Yet, what does Kurt Herbolsheimer do almost every day? Shovel snow. Even on a 103 degree June afternoon in the desert.

Granted, it’s not the 50 or so inches of annual snowfall Denver receives. It’s just a few shovelfuls of powder, the remnants that litter the floor after Herbolsheimer, 40, finishes an ice sculpture at Minus 5 Ice Bar in the Monte Carlo.

Snow is his albatross.

For nearly two hours, Herbolsheimer shaves, chisels and chain saws a couple of 300-pound blocks of ice into a tribute to the Summer Games. It’s a sculpture that Minus 5 manager Rupert King asked him to make as an homage to the Olympic torch and cauldron.

For the past 23 years, Herbolsheimer has been shaping ice into art, first as a young chef’s apprentice in Colorado, then in Arizona for 16 years where he ran his own ice carving business. He moved to Las Vegas in 2010, joining Ice Occasions as a sculptor.

Even the cocktail glasses are made of ice. The temperature inside the bar is a chilly 23 degrees Fahrenheit, or minus 5 degrees Celsius, requiring patrons to don parkas, fur hats, even snow boots and gloves. Every few weeks, Herbolsheimer stops by to do touch-ups to the ice features or make new sculptures.

A few weeks ago, he was in the bar to repair a 6-foot-6-inch-tall elf. A patron had tackled the elf because, well, people do whatever they feel like doing when they’re in an ice bar on the Strip, says bartender Candice Haman.

She’s worked at regular bars and can say with all the authority invested in her as a bartender that people are more mischievous in the ice bar.

“They try to break the ice,” Haman says. She means that literally.

Management frowns upon destructive acts, though. This is one place where, if you break it, you will most likely buy it. The elf-tackler had to pay $1,500 or go directly to jail.

On this recent Tuesday, two women poured their drinks into an ice sculpture shaped like a woman’s torso. Haman ran over to stop them but not before one woman dropped her ice glass on the floor. It shattered.

Almost as though they wanted to prove Haman’s point, the two women, Canadians Hailey Dahdona, 25, and Saryn Switzer, 23, whooped and hollered like kids playing in the snow. They flirted shamelessly with Herbolsheimer, who doesn’t look a day older than 25. Sorry, ladies. This single father of two is dating someone.

Minus 5 in Monte Carlo is about 1,200 square feet and features a couple of lounge areas. If you’re not standing in front of the tank full of fake jellyfish, or one of the many life-sized ice sculptures, you’re probably on the ice bench next to Herbolsheimer’s work area. He takes over a small room where he can wield his chain saw safely. Still, people can watch. And they do.

The average stay is about 45 minutes, depending on where a person is from, says King, the manager. Over the two hours that Herbolsheimer works, the faces change in the crowd. But they all watch, transfixed by his abilities.

He doesn’t know what it is about ice sculptures but they tend to fascinate people, Herbolsheimer says.

“Maybe people don’t believe it’s really ice,” he explains. “They have to touch it and feel it and when they do, they’re completely enamored by it.”

And he is glad for that. Their fascination keeps him gainfully employed. He gets to travel and meet interesting people, too. He once met Mohammed Ali and Dan Quayle.

Herbolsheimer grew up in Colorado. When he was about 8 years old, his parents took him to Disneyland. There, he watched a guy through a window as he made omelets. When he returned home, he proceeded to make nothing but omelets for a whole month.

In high school, Herbolsheimer decided to become a chef.

A three-year apprenticeship at the Radisson Hotel in Denver gave him the cooking and ice carving skills he needed to be a successful chef.

“I did anything and everything they asked me to,” says Herbolsheimer, who earned $4 an hour as a prep cook. “We would do Sunday brunch every week and we’d have two or three ice carvings out on the buffet. By the end of the three-year apprenticeship, I was doing all the ice carvings for the hotel.”

After completing the apprenticeship in 1993, he moved to Las Vegas for a cooking stint at the Hilton. A few months later, he and his then-wife moved to Arizona for her work. All this time, while working in kitchens as a chef, Herbolsheimer was carving ice on the side to earn extra money. It paid more than cooking. He left the kitchen for good in 1996.

In 2005, he decided to open his own ice carving business, Innovative Ice. It was a solid business, employing eight sculptors and grossing more than $600,000 a year. Then the economy tanked in 2008. Business dried up. Herbolsheimer lost his house.

He closed his business and called an old friend, the owner of Ice Occasions, and asked him for a job.

There are only about 2,500 ice sculptors worldwide, Herbolsheimer says. It’s a close-knit group.

They tend to stick together.