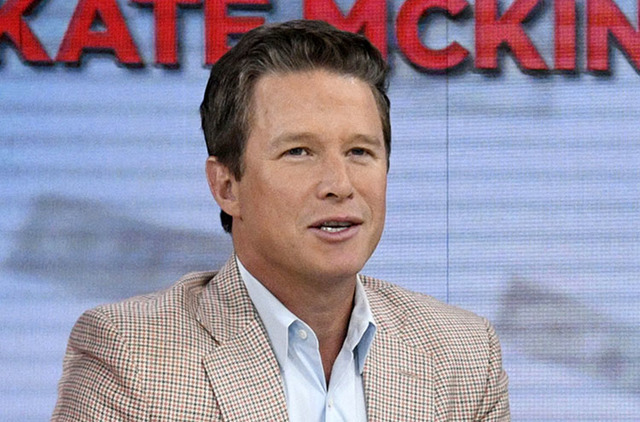 LOS ANGELES — Billy Bush and NBC’s “Today” show officially parted ways Monday, the denouement, perhaps, to one of the strangest episodes in the recent history of the frenzied TV-news industry.

“Billy Bush will be leaving the Today show’s 9 a.m. hour, effective today,” said Noah Oppenheim, an NBC News senior vice president who oversees the unit’s “Today” franchise, in the memo.”While he was a new member of the ‘Today’ team, he was a valued colleague and longtime member of the broader NBC family. We wish him success as he goes forward.”

The separation marks a quick reversal of fortune for Bush, who arrived at NBC’s “Today” just weeks ago to inject a new tone into the morning-show franchise’s 9 a.m. broadcast, which competes directly in many markets with the ABC syndicated program “Live,” hosted by Kelly Ripa. NBC made significant changes to the hour. Bush’s move to the show resulted in longtime “Today” anchor Natalie Morales moving to the West Coast to work on “Access Hollywood” to serve as a “Today” correspondent and Willie Geist departing to work on a revamped Sunday “Today” edition.

Bush’s tumble came after the revelation of his presence on a 2005 “outtake” from “Access Hollywood,” which Bush once co-hosted, showing him engaging in rough banter with real-estate mogul Donald Trump, now the Republican presidential nominee. In the tape, Trump boasts of his ability to sexually harass and assault women due to his celebrity status. In the conversation, Bush appears to egg him on. Speaking during an interview with CNN Monday, Melania Trump, the candidate’s wife, suggested Bush was to blame for Trump’s remarks, though the tape makes it clear Trump made his comments unprovoked by the former “Access Hollywood” anchor.

NBC initially seemed ready to defend the anchor, releasing a statement of apology from him a week ago. As news outlets continued to play the tape for days, Bush’s part in the dialogue was highlighted again and again. Even NBC’s own Seth Meyers has poked fun at him in late-night monologues.”Saturday Night Live” poked fun at the episode in this past weekend’s “Weekend Update.” Reaction within the production staff of “Today” may have also turned the tide of sentiment against him. A number of female “Today” staffers were upset and offended by the remarks, according to people familiar with the situation, leaving Bush’s position on the show untenable

Bush released his own statement. “I am deeply grateful for the conversations I’ve had with my daughters, and for all of the support from family, friends and colleagues. I look forward to what lies ahead.”

Under the terms of his separation from NBC, Bush is able to seek out new employment, said Marshall Grossman, his attorney. “Billy is no longer employed by NBC. He is a free agent, and there is no non-compete,” said Grossman, speaking via text message. Grossman declined to comment on whether his client received any financial settlement as part of the arrangement. In a statement released Friday night, the attorney disputed reports of a $10 million payment, noting “that amount has not been discussed.”