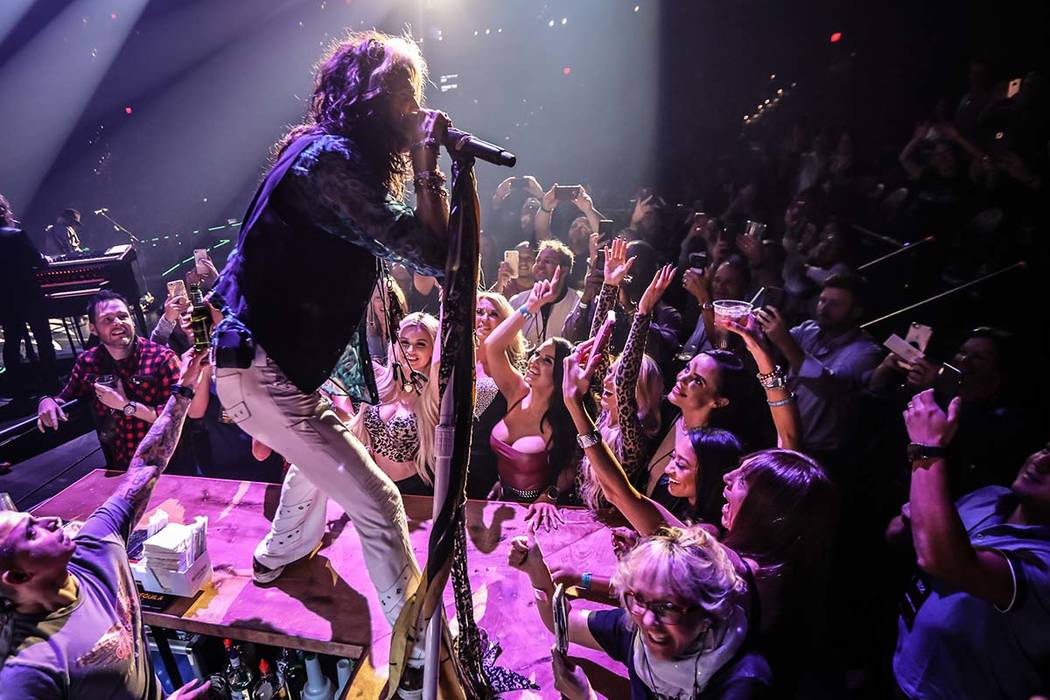 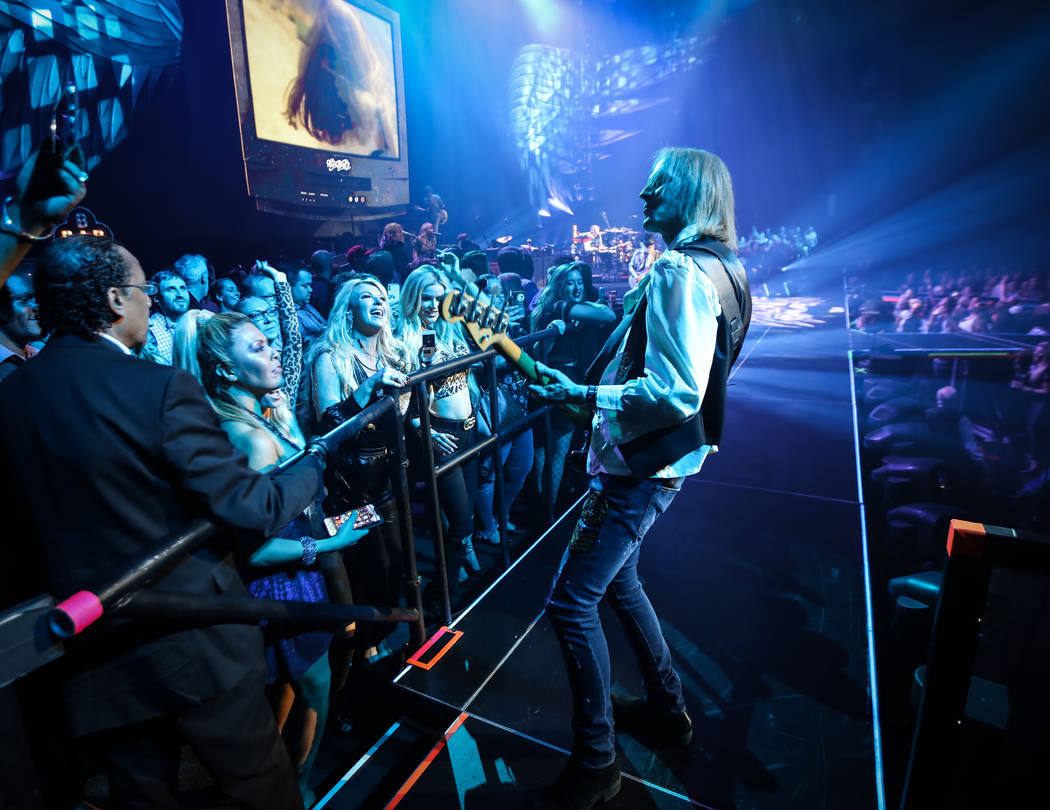 Tom Hamilton of Aerosmith is shown performing on the bar in the onstage VIP section at Park Theater on Tuesday, Nov. 19, 2019. (Kat Benzova) 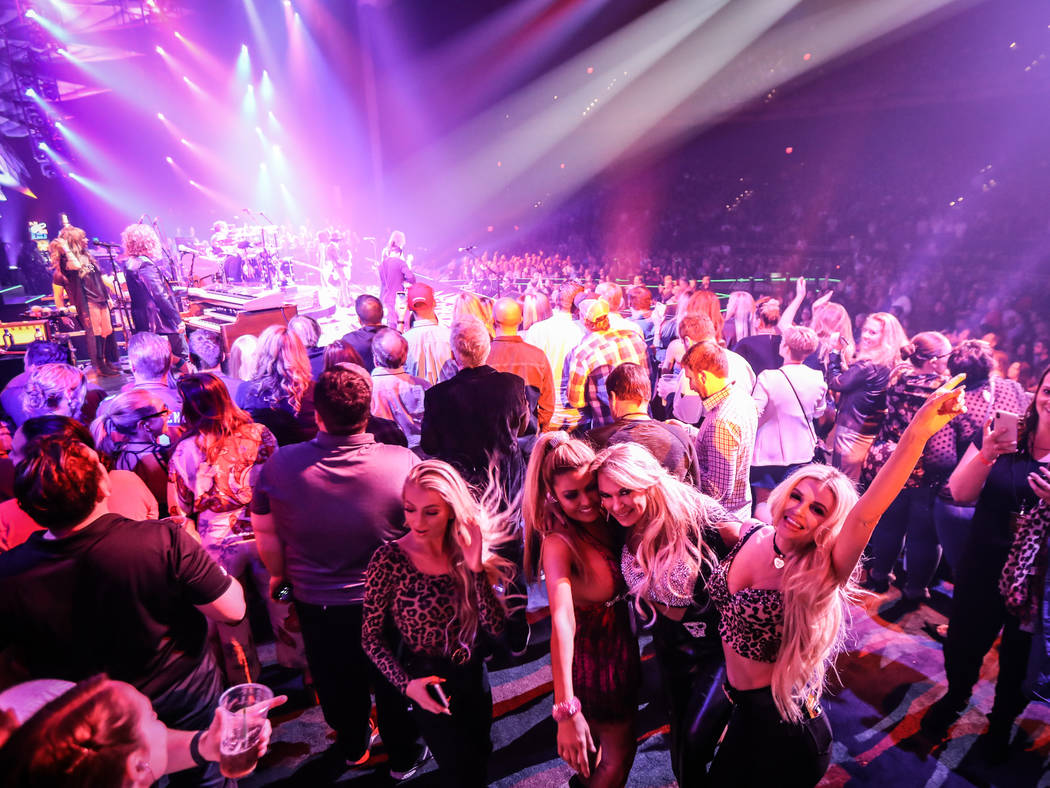 The onstage crowd on the VIP section for Aerosmith's "Deuces Are Wild" production are shown on Tuesday, Nov. 19, 2019. (Kat Benzova) 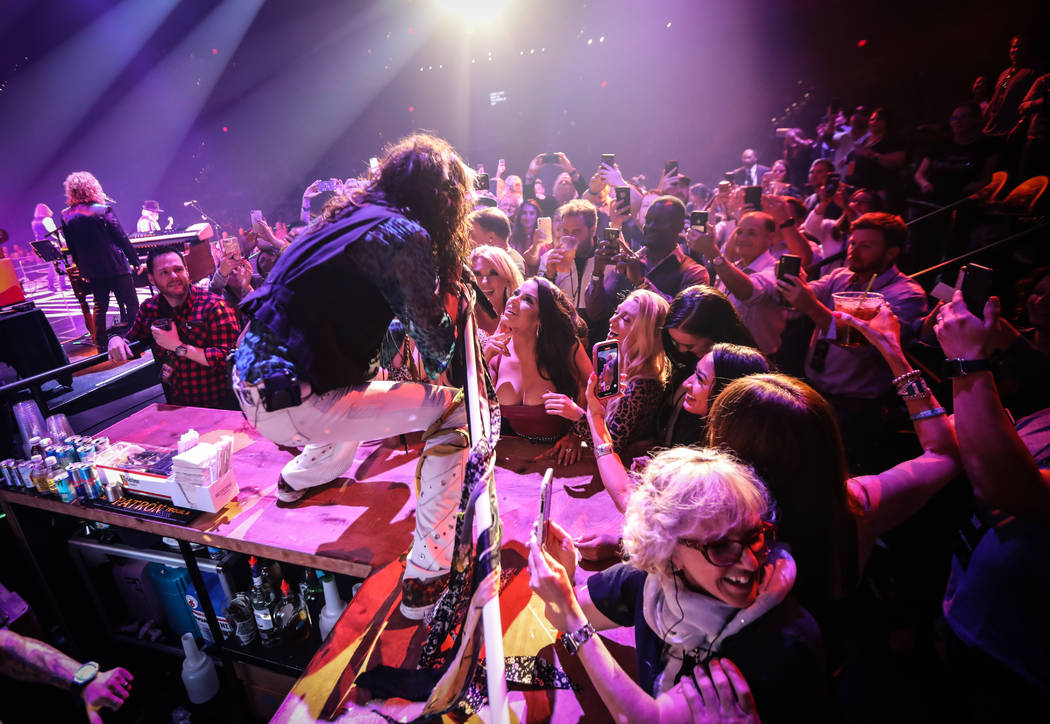 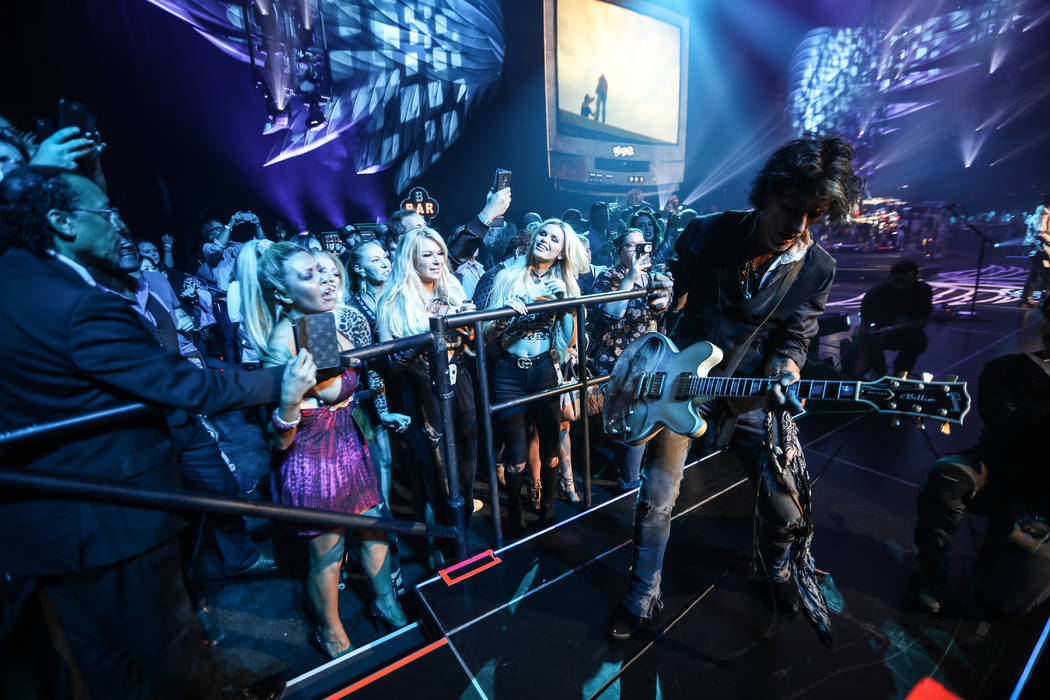 Joe Perry of Aerosmith is shown performing on the bar in the onstage VIP section at Park Theater on Tuesday, Nov. 19, 2019. (Kat Benzova)

The Kats! Bureau at this writing is in close proximity to Aerosmith, not just spiritually but in fact. I’m seated in a group so close to the band you can actually catch the distinctive scent of Steven Tyler. Not sure what it is, sort of a citrus-berry-macho-musk fragrance. I call it Sweet Emotion.

This particular seat is in the the VIP On Stage THX-Perience at Park Theater. As the name indicates, these ticketed platforms flank the main stage and offer seating and standing-room-only positions. These have to be the premiere seats in all of rock ‘n’ roll. I’ll ask Joe Perry, between solos.

This seriously feels like watching the band in a music club, if the music club itself were the show. To put this experience in financial context, a single ticket costs about $295.

It’s a lot, but so is the experience.

You’re provided an iPod and a pair of 1More earbuds (a $100 value, which you keep), and given the choice of the band’s or Tyler’s audio feed. You might have heard about this system, and how you can hear Tyler alternately sing and deliver directives — and complaints — to the audio crew and his sidemen. The band feed is a more balanced audio mix, actually, and you can toggle the two.

The onstage scene is rife with pretty women, not so incidentally. They are part of the show, wrangled by Aerosmith superfan and able Vegas networker Tiffany Masters. She contacts women around town, some friends and many strangers, to arrange an onstage experience. Many are entertainers, including JoJo Hammer of “Crazy Girls” and busy Vegas club DJ Liz Clark. There are a pair mother-daughter tandems, as Aerosmith’s music rocks multiple generations.

“I want to see what you’re saying about me!” Masters says as she stops at my perch. “I don’t want to wait!” Masters studied journalism at the University of Kansas and senses she is the subject of this sentence.

Down at the bar, the tableau of ladies rocking our is similar to a vintage Aerosmith video, which is how Steven likes it.

It’s not all females, of course. We have gentlemen of certain achievement here. Nevada Gov. Steve Sisolak — who at age 65 is six years younger than Tyler — is in the mix somewhere, along with his wife, Kathy Ong. Saturday, Massachusetts Gov. Charlie Baker was in the house, and he’s a bonafide, lifelong Aerosmith fan.

The Boston band presented Baker with a signed photo of himself as a teenager going wild at an Aerosmith show. Baker is said to be in line for a presidential run in 2024; that photo will give him at least five points nationally. Tyler as his running mate would turn it into a landslide.

OH! Show is off, opening with “Let the Music Do The Talking,” and Tyler is already into it with the crowd. “What the (expletive) can be bigger than this!?” Hey, no quizzes!

Tyler has the crowd chanting what I’m reliably told is the LVCVA’s new promotional campaign. He shouts, “What happens here?” The crowd shouts back, “Only happens here!” this is for the next tourism commercial for the city. Shania Twain, Christina Aguilera and Gwen Stefani have also recorded clips using that phrase (Twain, Aerosmith and Lady Gaga band leader Brian Newman have all said Jan. 26 is the time for some big announcement).

Expect this: "What Happens Here, Only Happens Here!" is the new @LVCVA @Vegas ad campaign. That's why @IamStevenT was shouting that callback during tonight's show. @ShaniaTwain @gwenstefani @xtina (among others) have also recorded clips incorporating that slogan. pic.twitter.com/mq5uMiULL5

Meantime, Tyler just shed his silver trench coat. Beautiful piece, I think made of platinum threading or something similarly wonderful. If I were to open a fashion line, it would be Stuff Steven Sheds From The Stage.

“Home Sweet Home” is one of many sing-alongs. Something to know about Perry, by the way: No in-ear monitors. Goes with the speakers on the floor. Old school.

Tyler is wearing white pants, after Labor Day, which is actually accepted according to my friend Marie … Clair. He also just sauntered down a walkway to the bar on stage right, performing most of “Walkin’ The Dog” there. He pointed near me, or maybe at me, and shouted, “What the (expletive) are you doin’?”

Holding out for my interview!

Tyler just says whatever’s on his mind. Much of the time what’s on his mind is, “Stand the (expletive) up!” Sit at your own risk. As another rock star once said, “If you want to play, you’ve got to pay!” That’s how it is in “Deuces Are Wild.”

The fragrance song, “Sweet Emotion,” is up now. Tyler is up with sub drummer John Douglas (still in for Joey Kramer), thrashing through this classic.

After Perry swings through “Stop Messin’ Around,” Tyler hustles back to his spot, shouting, “My turn!” This guy just commands the stage, literally.

“Cryin’” is the next anthem. This is the song Tyler dedicated to Ryan Seacrest on Saturday night, posting custom lyrics, “I WAS RYAN’ WHEN I MET YOU, NOW I’M RYAN’ CAUSE I GET YOU.” Dyin’, here …

Tyler just ventured to our section, which for Masters and her entourage is social-media gold. Hey, don’t grab his hair. You’ll lose a ring.

“Rats in the Cellar,” a thunderous rock song and also a common household concern, is now. Dang, Tyler can play the harmonica. Great drummer, too. And plays the big, round, shaky thing (I’ll look up its name later) to great effect.

You feel as if you can walk right up there with the band during some of these solos. They should give away maracas and tambourines with the ear buds. Turn it into real mass hysteria.

“I Don’t want to Miss a Thing” stars a Vegas string section. Jennifer Lynn (or, Jennifer “Vio” Lynn, as I call her) just looked over but dang I don’t think she saw me. I am shouting for a solo. The lineup is Lynn, Jennifer Hellewell, Sarah Chaffee and Monique Olivas. Applaud whenever you see them.

When you rank the great opening rock riffs ever, Perry’s intro to “Love In an Elevator” is up there. Tyler has said it is based on a true story. “Love On an Escalator,” sadly, has not yet been recorded.

The inflatable figures are out for “Toys in the Attic.” Here come the red-and-gold balloons. Magic. Tyler at the piano for “Dream On,” with another shiny jacket and his hair pulled up. The man is a marvel, and also aware of his surroundings. “Get more piano in my ears!” he shouts on his audio feed. Hey, I’m on it. Tyler wails the high note, and that vocal effort is why he doesn’t sing on consecutive nights.

Hey, I think I just spotted our governor, leaning on the rail near the stage. No earbuds. He’s missing out.

“Walk This Way” is performed with Tyler and Perry on the walkway leaeding from the stage to the balcony. The song ends in a mini-medley, with Led Zeppelin’s, “Whole Lotta Love.” Tyler answers a shout about the image on his tank top, saying, “Yes, this is Britney Spears, right here!”

And as he leaves, in you hear him call to an unseen sound man, “You might want to turns these up!” meaning the house speakers. The man is a perfectionist. You can see it, and hear it, loud and clear.