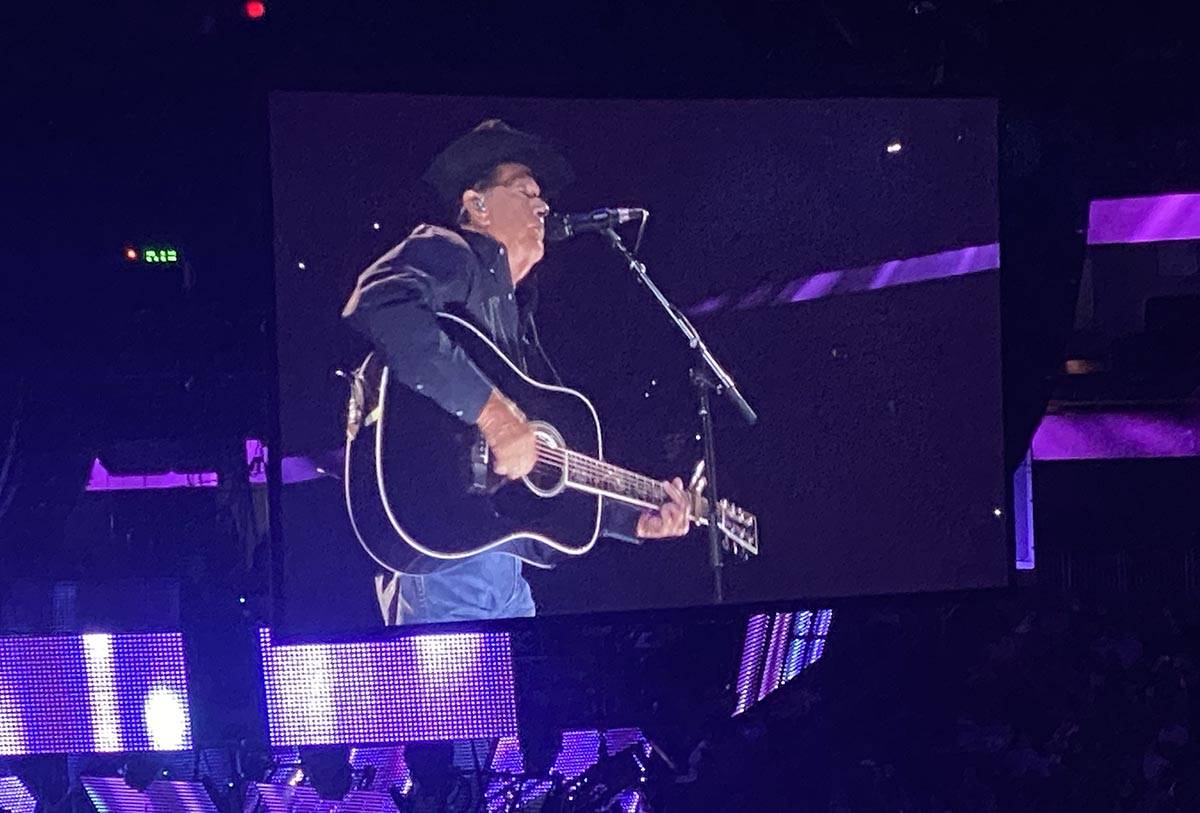 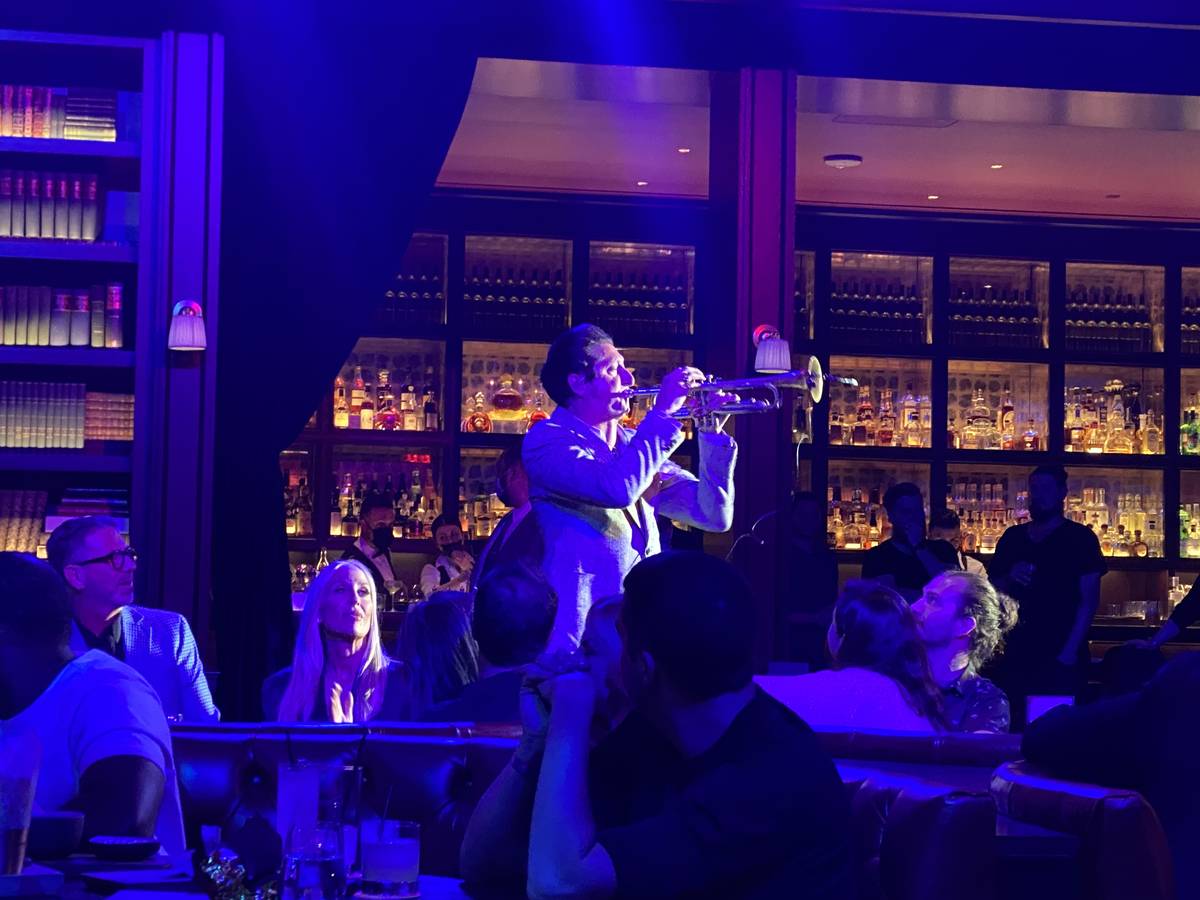 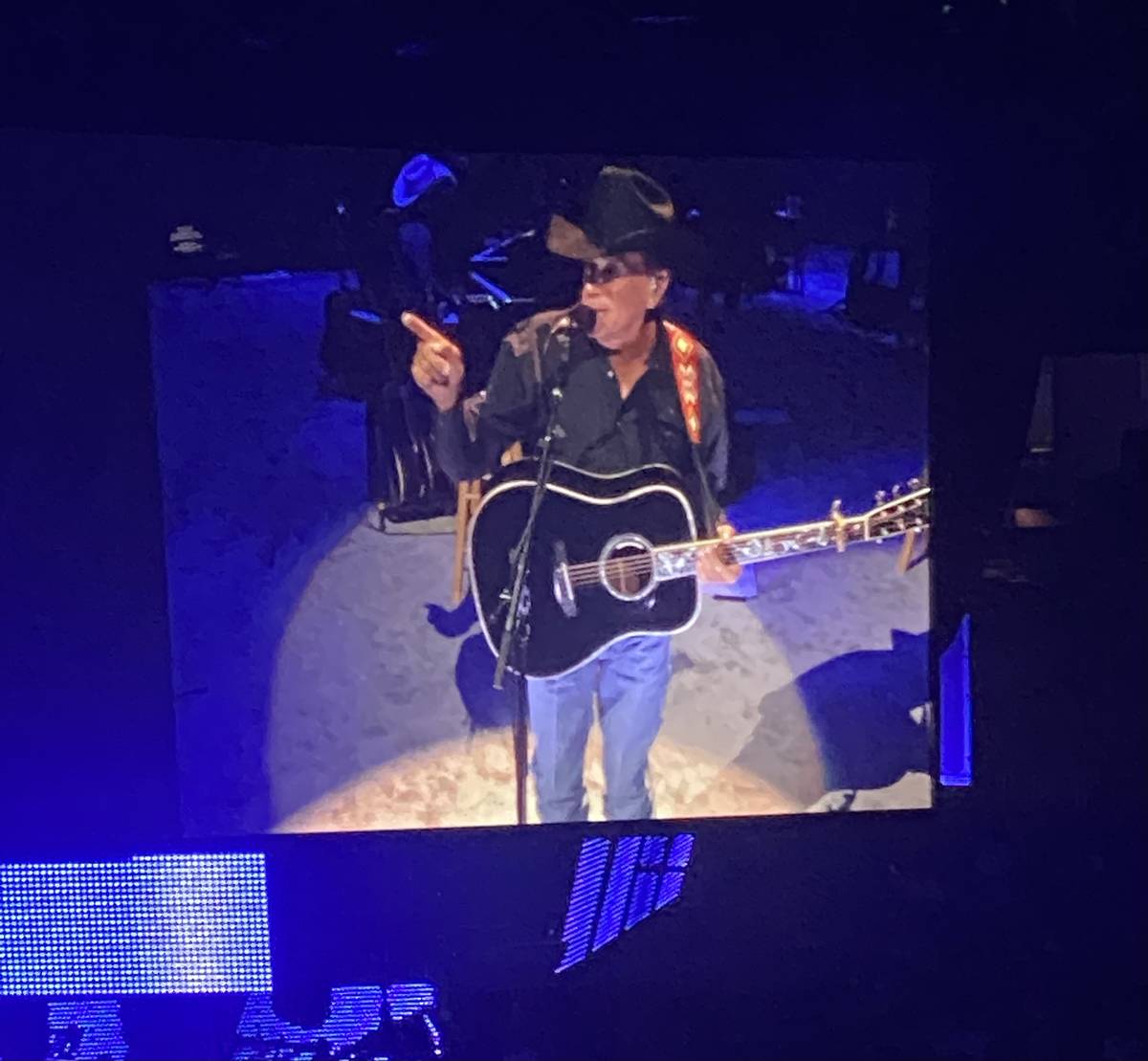 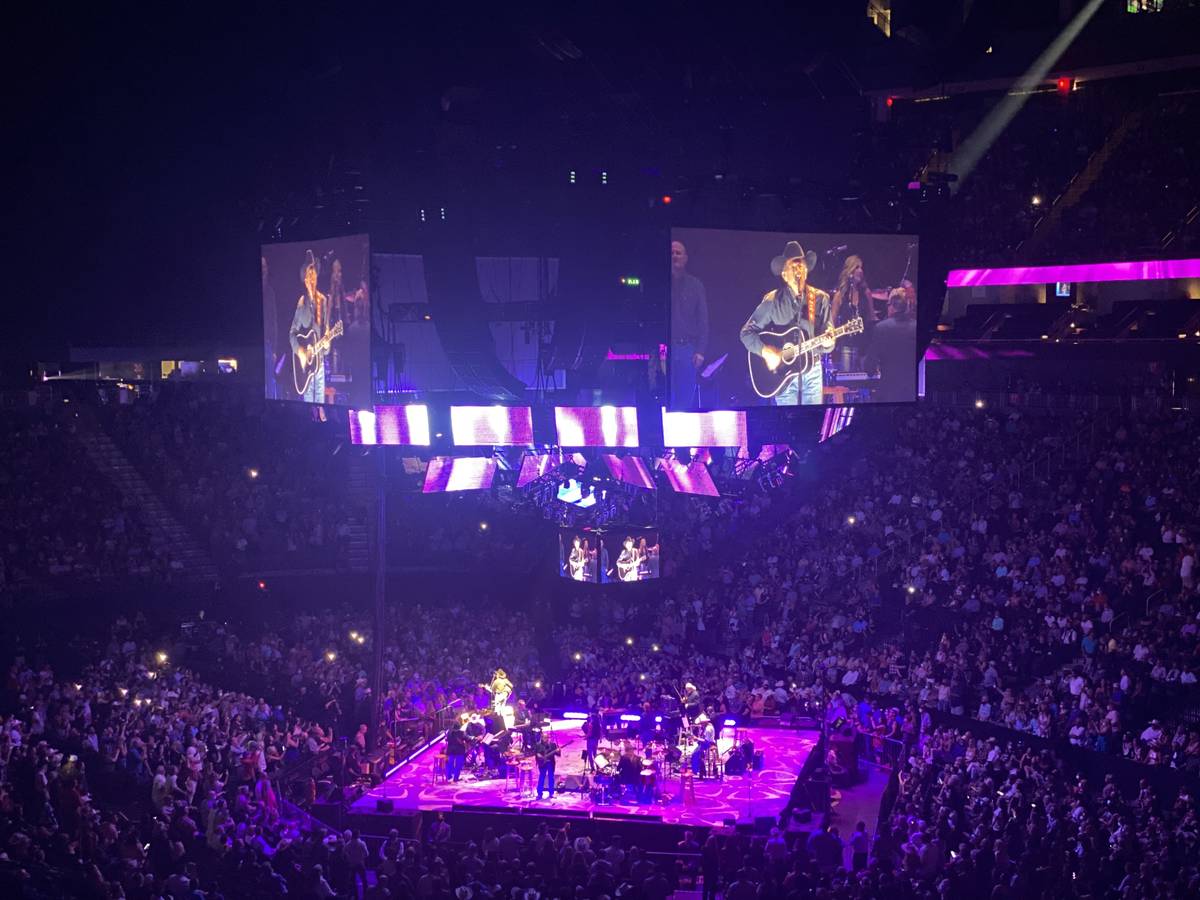 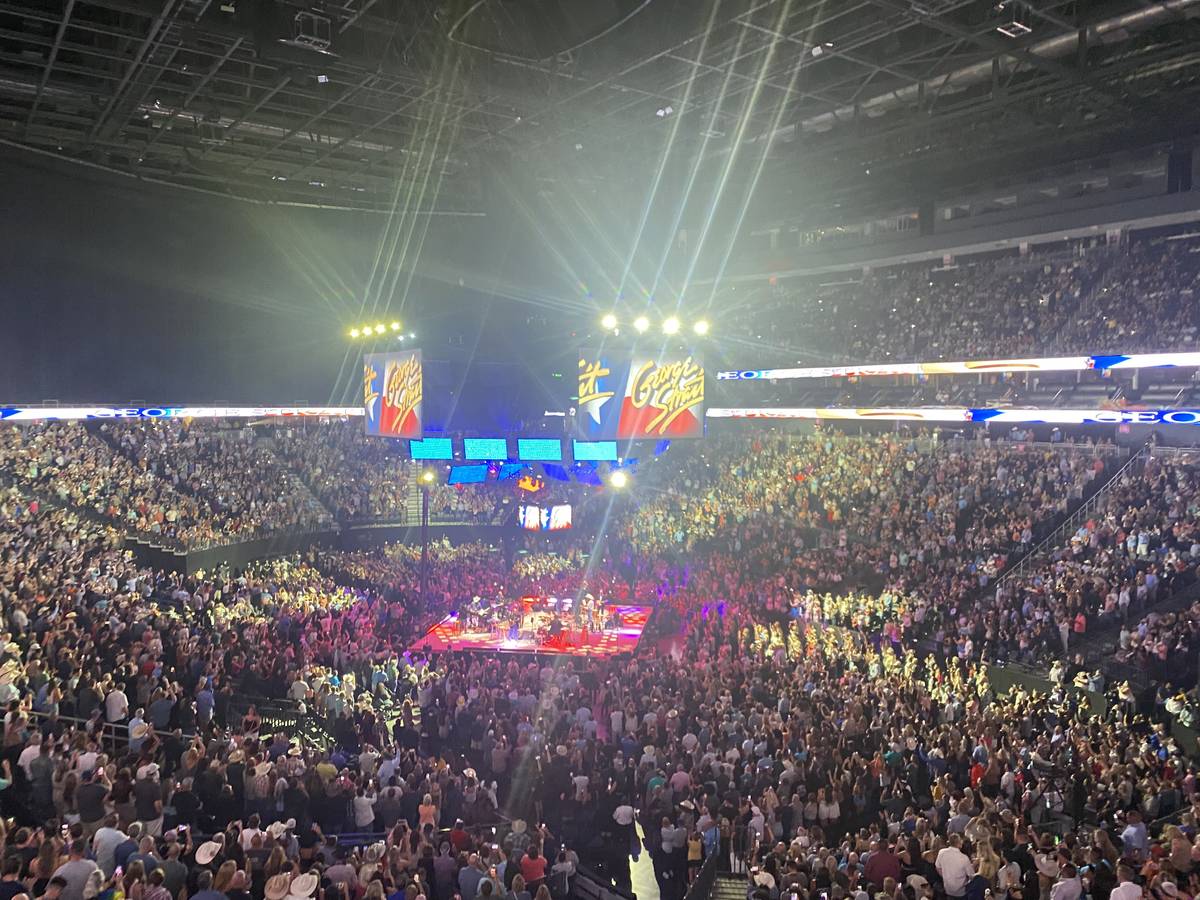 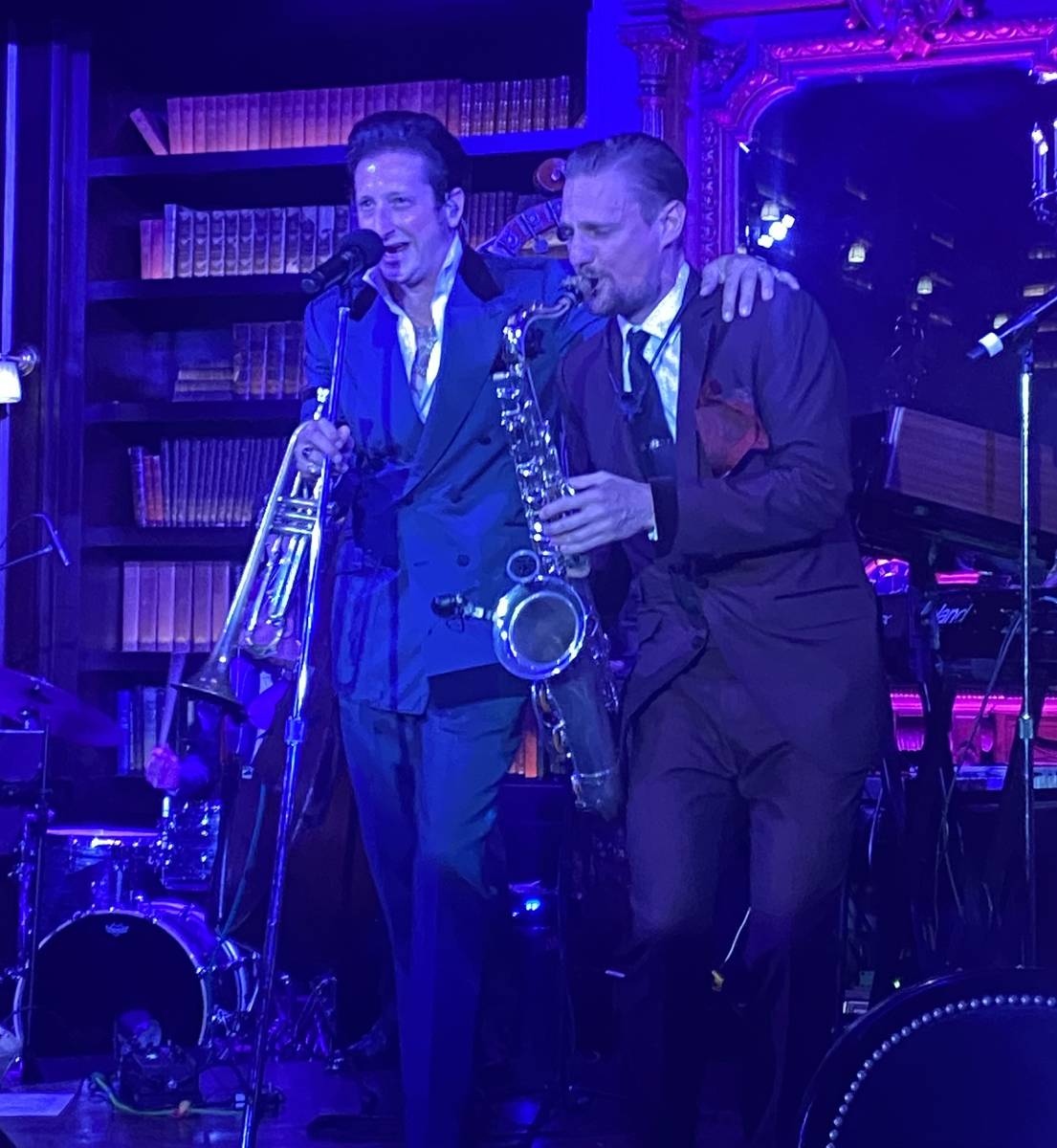 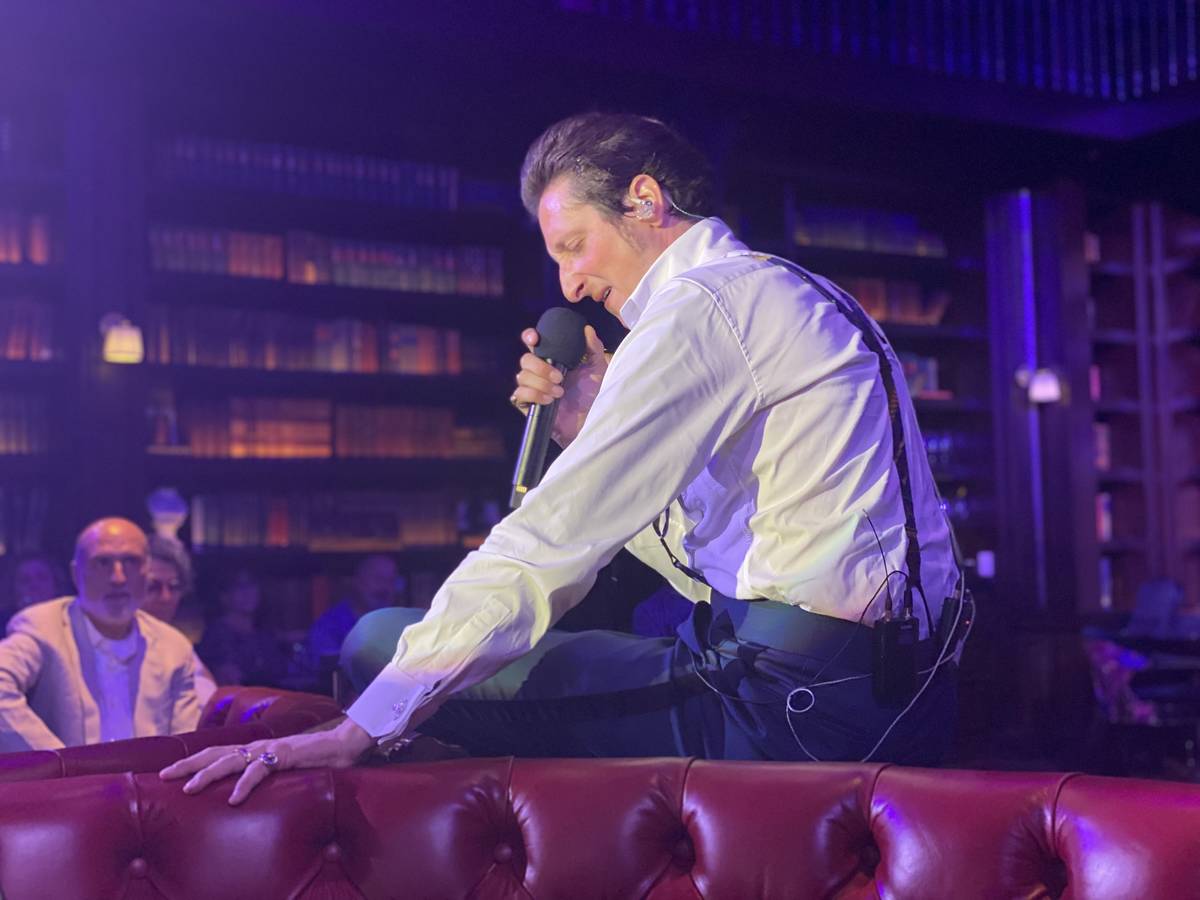 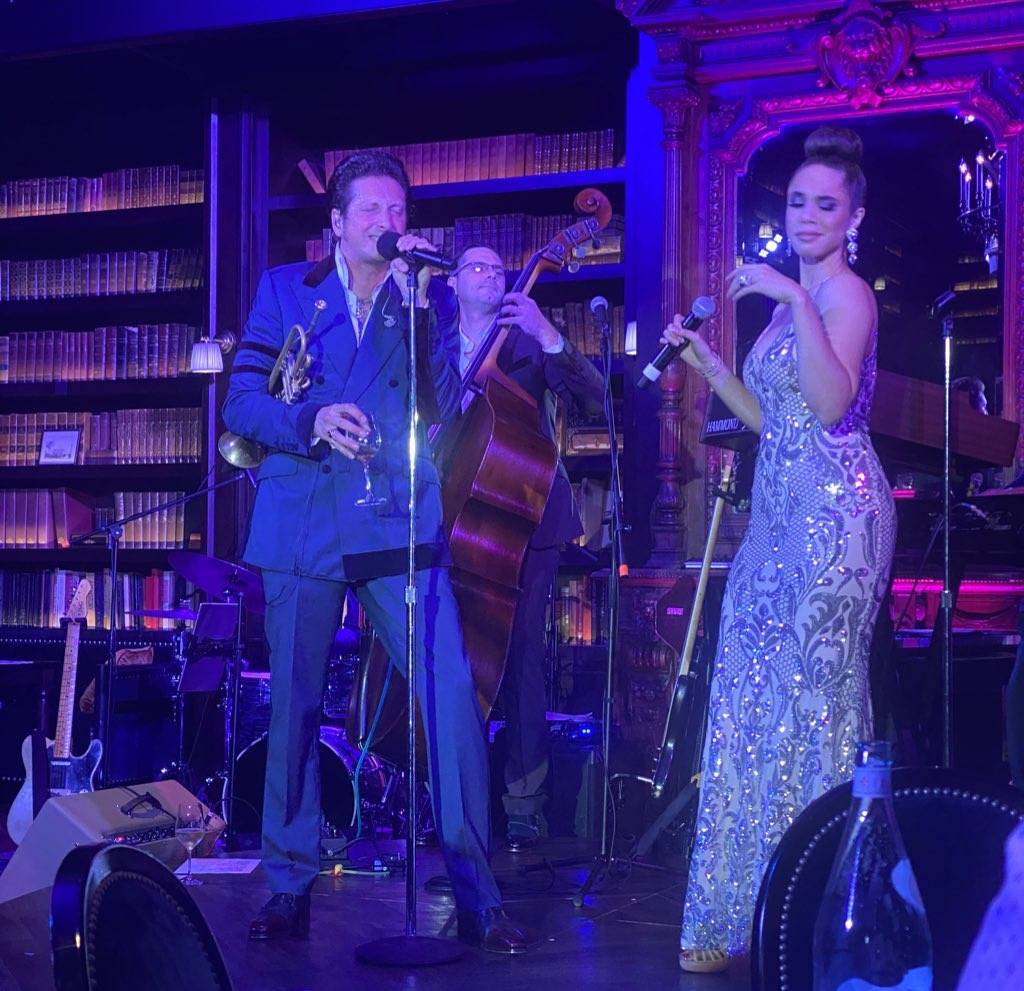 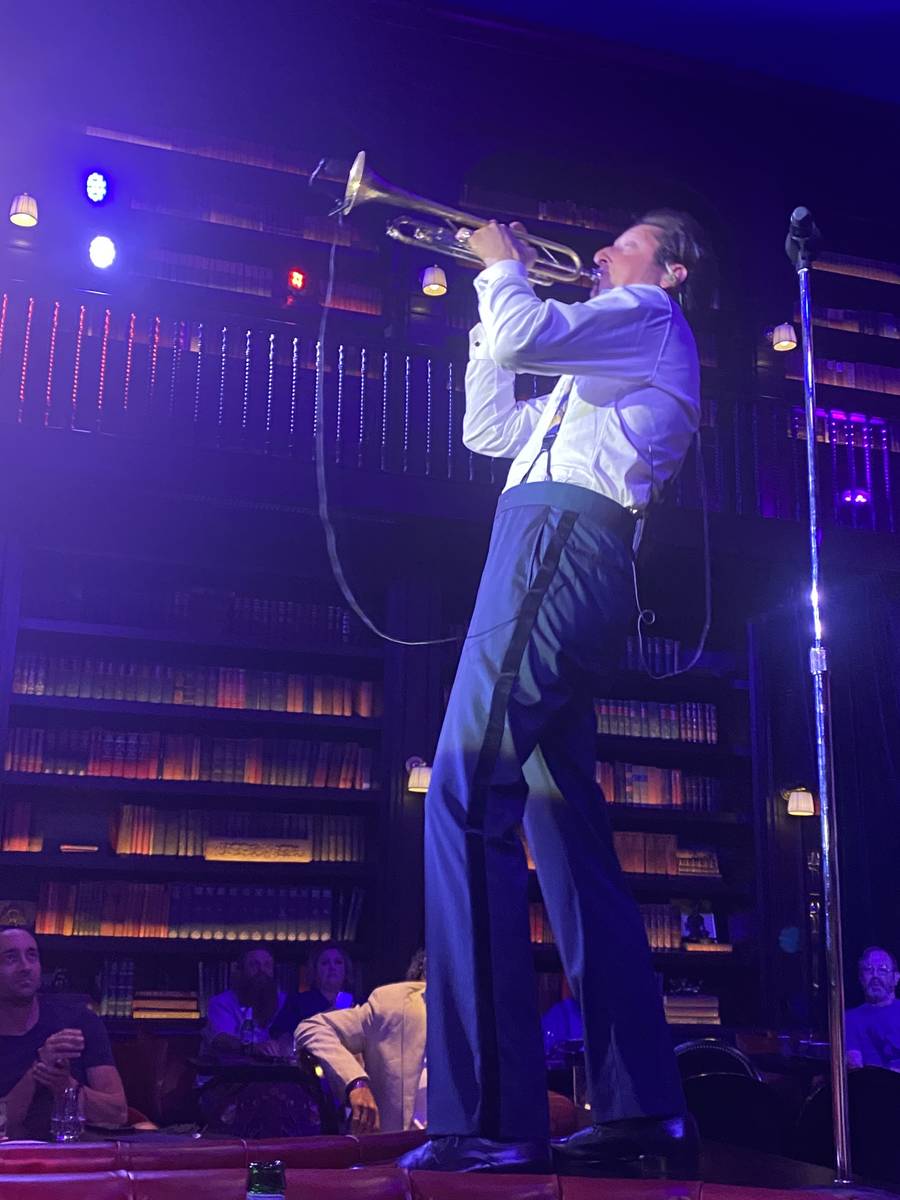 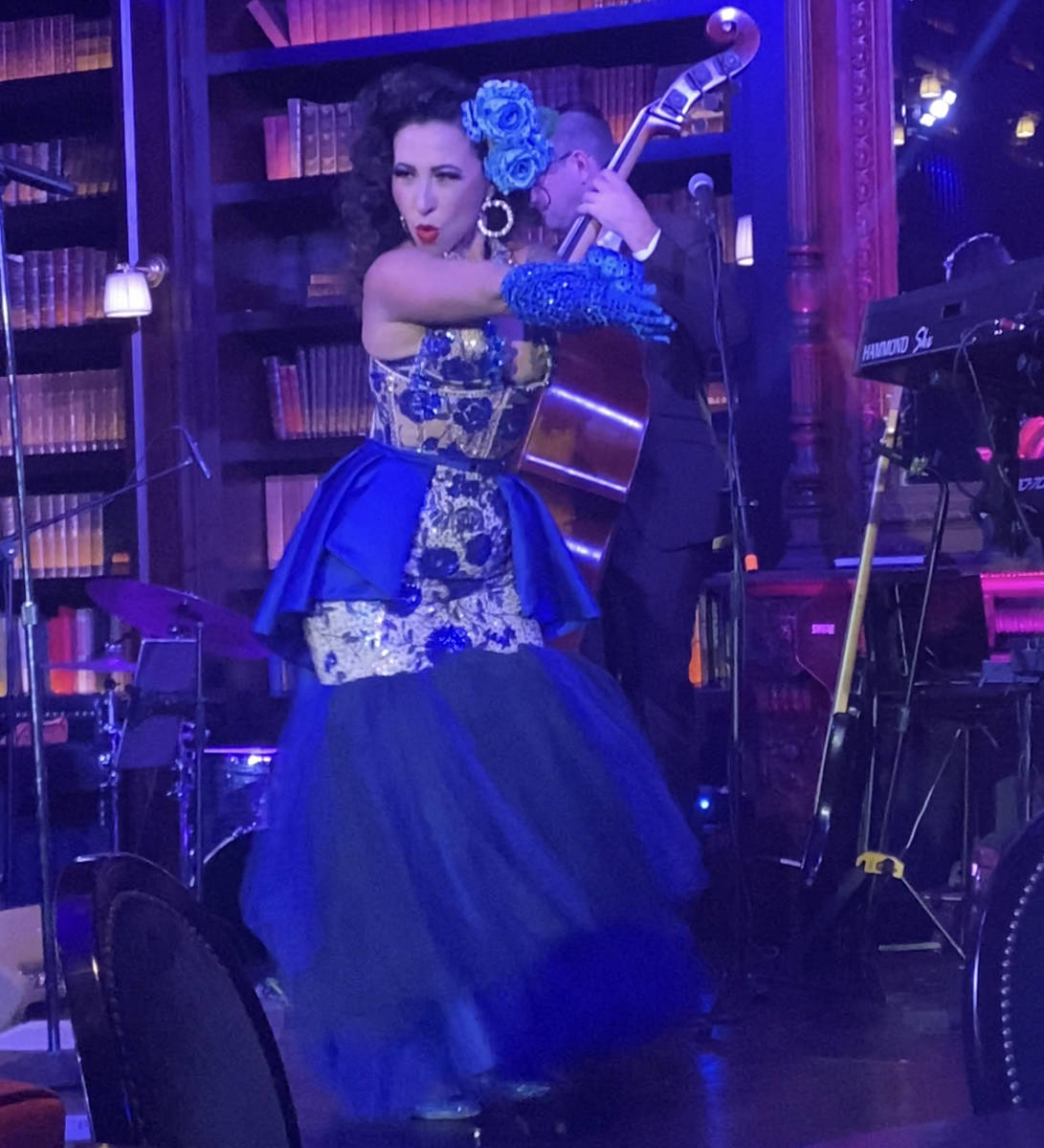 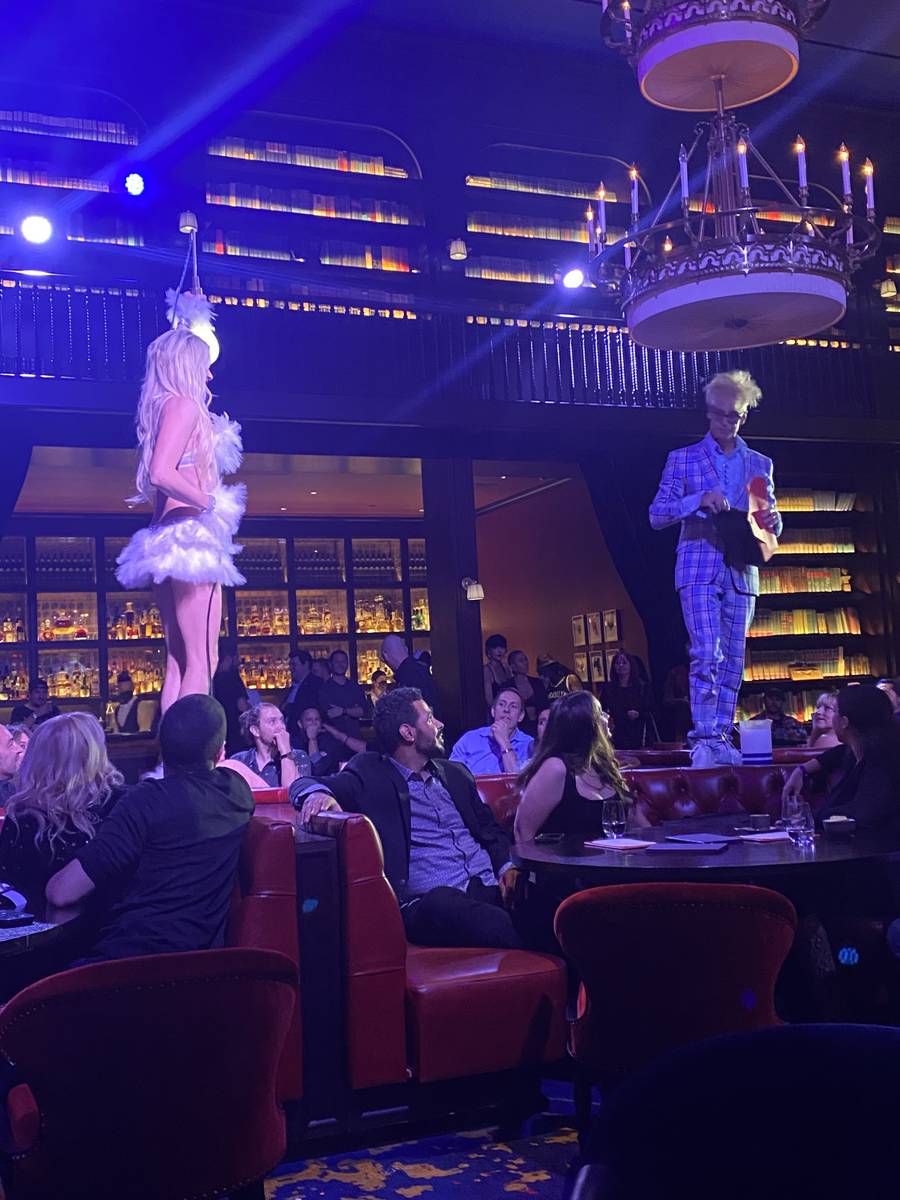 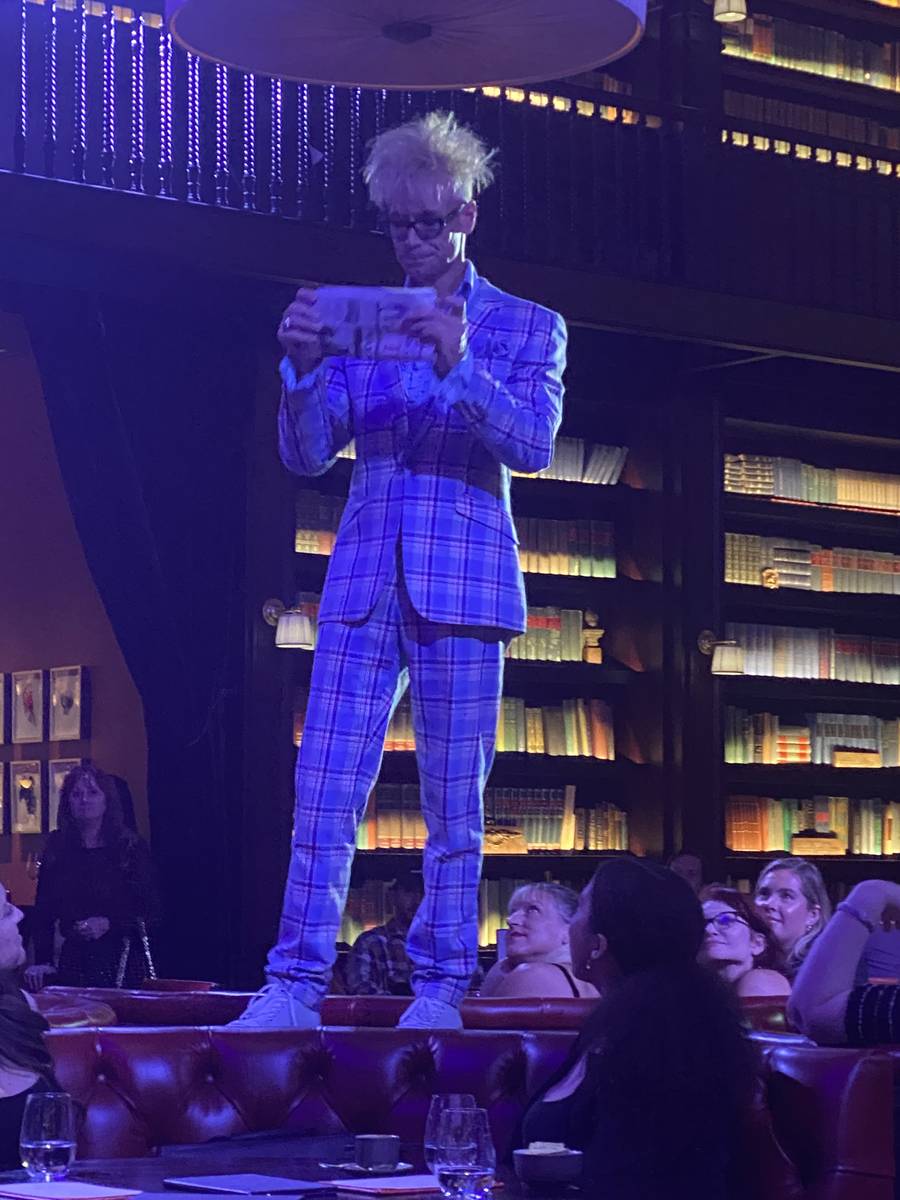 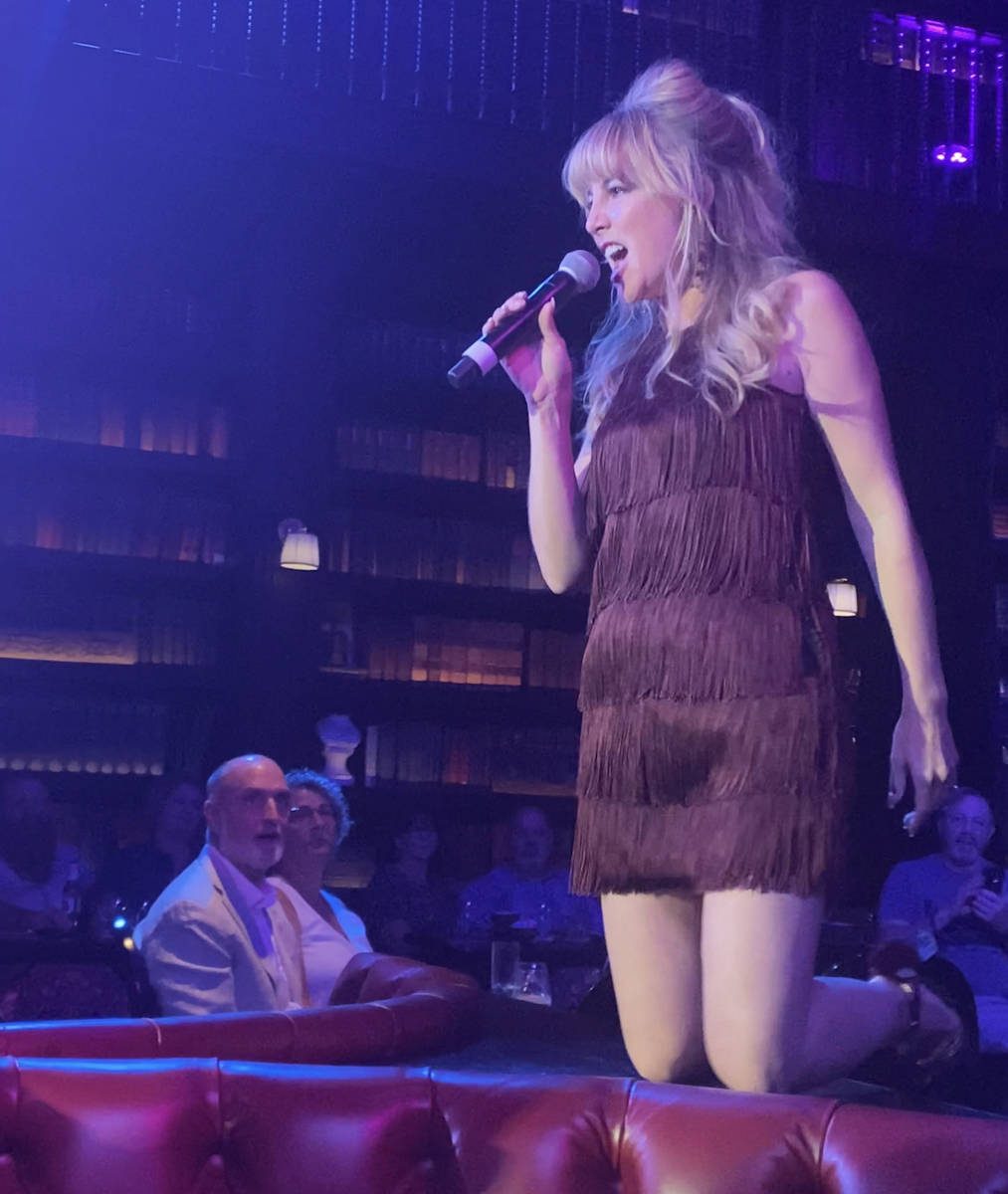 The Strip last weekend delivered a pair of great showmen within a horseshoe’s throw of each other — George Strait at T-Mobile Arena and Brian Newman at NoMad Library at Park MGM.

One resolutely embraces his rich musical heritage, while advancing his presentation to satisfy contemporary tastes. The other is George Strait.

Apart from those qualities, and that both performers returned after uncommonly long layoffs, Strait (the undisputed King of Country) and Newman (Lady Gaga’s swingin’ bandleader) are not so stylishly similar. But they can move a crowd, and their back-to-back shows Friday recaptured pre-pandemic energy.

Strait strode out to a standing, full-throated roar at T-Mobile. He carried something of a Johnny Cash vibe, in a black Western shirt (we deduce a Wrangler George Strait model), Wrangler jeans and a pair of Justin Boots.

His hatted fans turned out, relishing all the hoopla. After a saunter to the stage worthy of a champion prize fighter, he called out, “It’s great to be back after almost two years!”

Strait and his Ace in the Hole Band powered through such personal faves as “Here For a Good Time,” “Amarillo by Morning,” “Unwound” and “All My Ex’s Live in Texas.” The latter is rivaled only by Paul McCartney’s turn of “Hey Jude,” Billy Joel’s “Piano Man” and Garth Brooks’ “Friends in Low Places” as concert sing-alongs.

Strait’s style is described as “neotraditional country.” Let’s not overthink this. To me, Strait is a traditional artist who happens to be performing today. He has also crafted a way of performing that satisfies all of the arena’s sections, playing a song or two on one corner of the stage, then moseying to the next. Every move around the stage creates new energy. I doubt Strait actually counts up the standing ovations he sees in his shows, but it has to be double digits.

But he deserves it. Strait is a force onstage without needing to gyrate, hook himself to an aerial harness or even play a single guitar solo. But that voice, man. It sings to me, and, I would presume, all those exes.

Next was a sprint over to NoMad Library, where Newman has blazed back to town with his “After Dark” residency.

NoMad Library was formerly NoMad Restaurant, under that title when Newman previously headlined the venue in 2019 and early 2020. But we can reliably report that the name was changed as a nod to Lady Gaga, who once offhandedly referred to the venue as a “library” because of David Rockefeller’s 25,000-book collection stacked on its shelves.

Newman has retrofitted such classics as “Roxanne” and “The Gambler” along with more aged numbers, including “That Old Black Magic” and Cole Porter’s “I Get a Kick Out of You.”

He doesn’t carry the load on his own; Newman’s too smart for that. He has surrounded himself with a young-ish band of longtime friends with old souls. Alex Smith, Steve Kortyka, Nolan Byrd and Daniel Foose are the musicians we’ve gotten to know. Guitarist Tim Stewart, from Gaga’s “Pop” show, sat in. Newman’s burlesque-dancing wife, Angie Pontani (the pride of Trenton, N.J., evidently), performed two numbers, including one in which she stripped to a “slingshot.” Gotta see it to understand.

Jaclyn McSpadden, whose nickname became “Jackie-Mac” during the pause, also sings a wicked version of “Creep” in her regular appearances. This is the woman about whom Gaga said, “You’re special!” after watching her perform that song. Guesting in Newman’s opener was Morgan James (late of Postmodern Jukebox), who blew the place up with “Sledgehammer.”

The guests kept coming. On Friday, Newman summoned the keyboard legend Ronnie Foster, who has played for years with George Benson and is also featured on Stevie Wonder’s “Songs in the Key of Life” classic. Foster’s drumming son, Chris Foster, joined the jam. Serious musicianship, at a quarter past 1 a.m. No wonder Newman actually ordered an espresso for an audience member who appeared “tired.”

Also in this retro mix, a Strip magician in a sky-blue, plaid suit showed up. Tropicana headliner Murray SawChuck and his fiancee, Dani Elizabeth of “Crazy Girls” (we keep that show in present tense, as it is still looking for a home) performed Mr. Electric’s Milk in Lightbulb routine. Skim milk, judging by the two fit performers.

Embracing variety, Newman continues to informally throw names around, of those he wants to join this hang. We expect more Vegas musicians, singers, headliners, as he continues next Thursday, Friday and Saturday.

Newman’s show has the DNA of legendary performances in Vegas’ golden lounge era, seizing the vibe made famous by Louis Prima in the late 1950s and into the ’60s. We see footage and photos of those days, and wonder what it was like. We have a version of it now.

And if you time it right, you can see a bonafide country legend, too. Call it drawing an inside Strait.

Yes, that was Alex Rodriguez on the big screen at Allegiant Stadium on Saturday during the Raiders-Seahawks game. He was also spotted Friday at the NBA Summer League at Thomas & Mack Center. Wynn Nightlife headlining DJ Diplo (interview by my bud J.T. the Brick from the crowd), Pauly Shore, and Kerry King of thrash-metal band Slayer were also at the first full-capacity NFL game ever in the venue.

Kelly Clarkson was at Friday’s Strait show. I managed not to run into her. But the recording star has posted on social media about being there with two girlfriends. She was also at Topgolf with her mini-entourage.

Clarkson took the trip a day after a judge upheld the prenuptial agreement she had drafted with her estranged husband, Brandon Blackwell. Clarkson is due back in Vegas on Oct. 2, for “The Event,” Shaquille O’Neal’s charity concert at MGM Grand Garden Arena.

The Sand Dollar Lounge on Polaris Avenue and Spring Mountain Road brings the live, no-cover music nightly. The Funk Jam is a highlight in that enduring lineup, performing 10 p.m.-2 a.m. Wednesdays. Led by bass great Anthony James, the show is all funk, all improv, delicious pizza and fizzy water. Oh, and a full bar. Get to it.