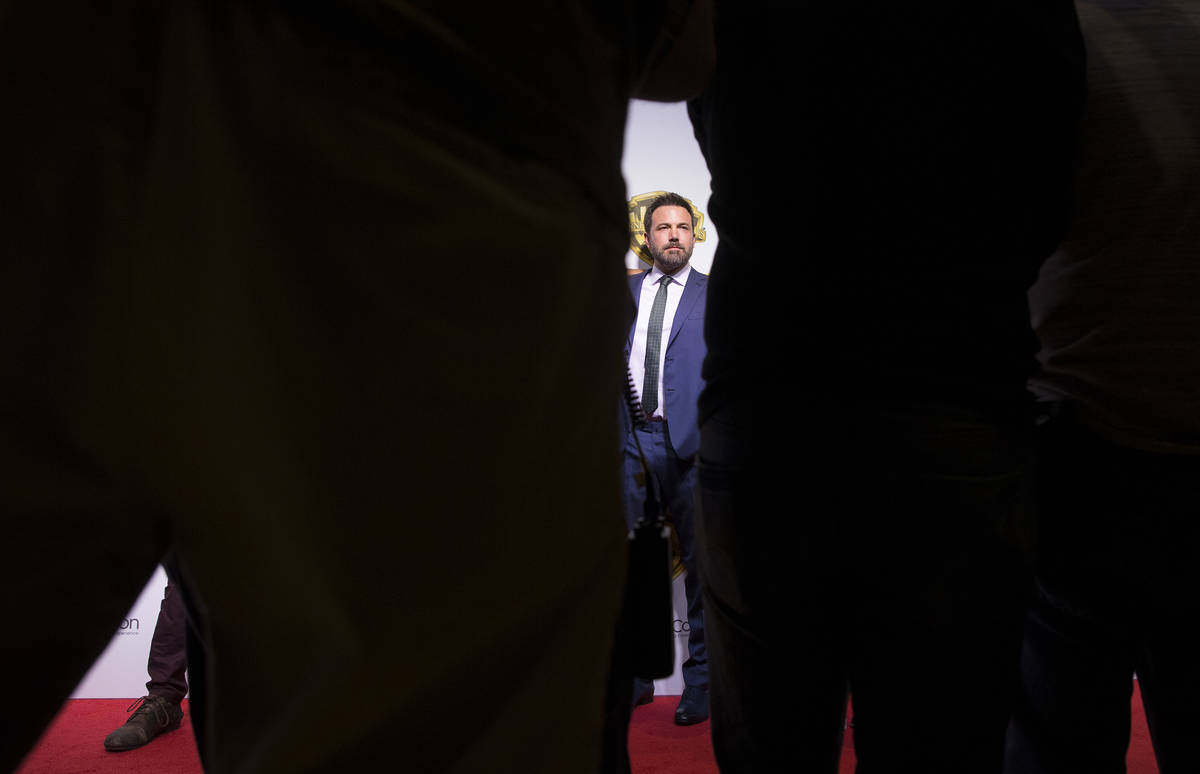 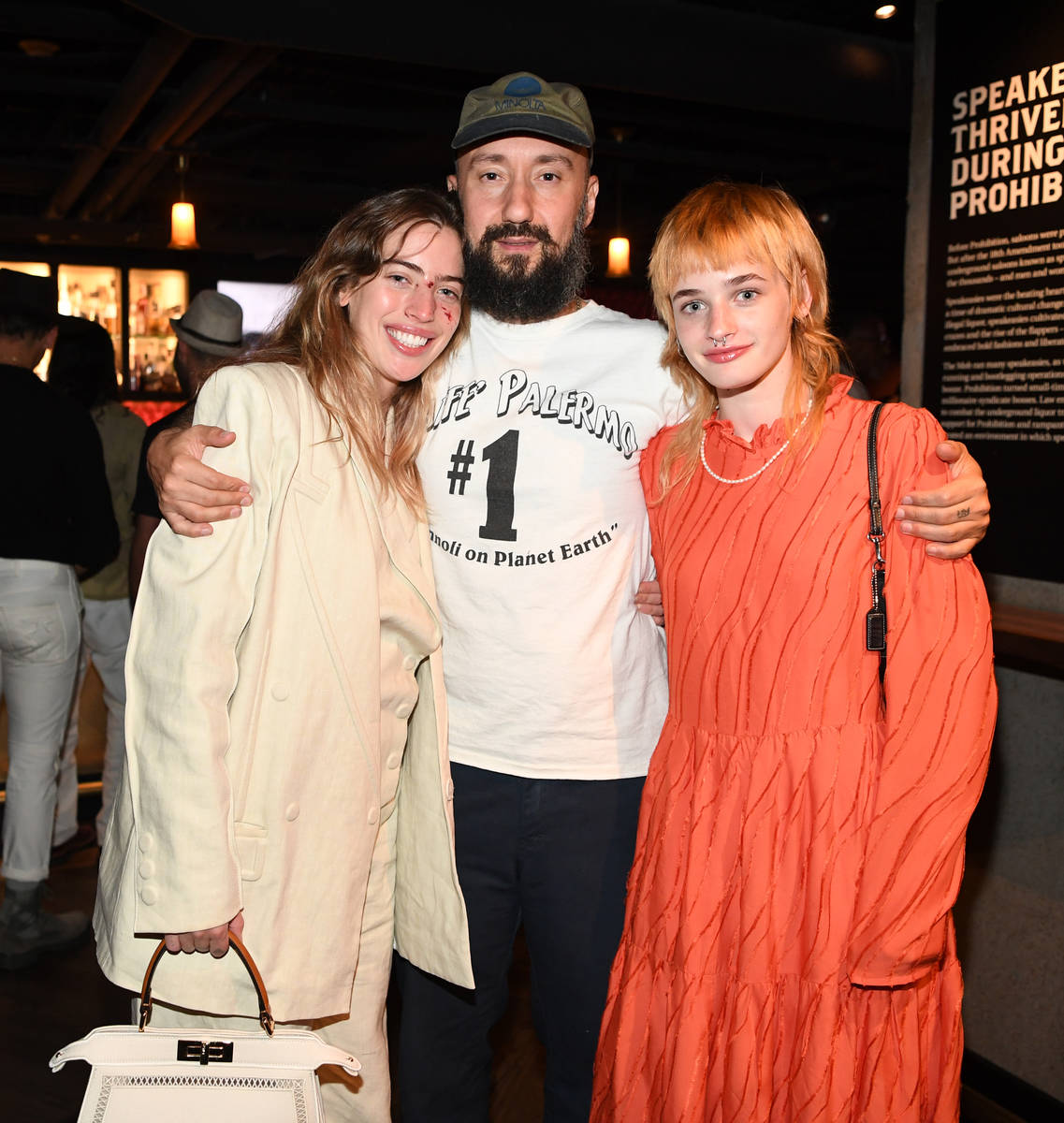 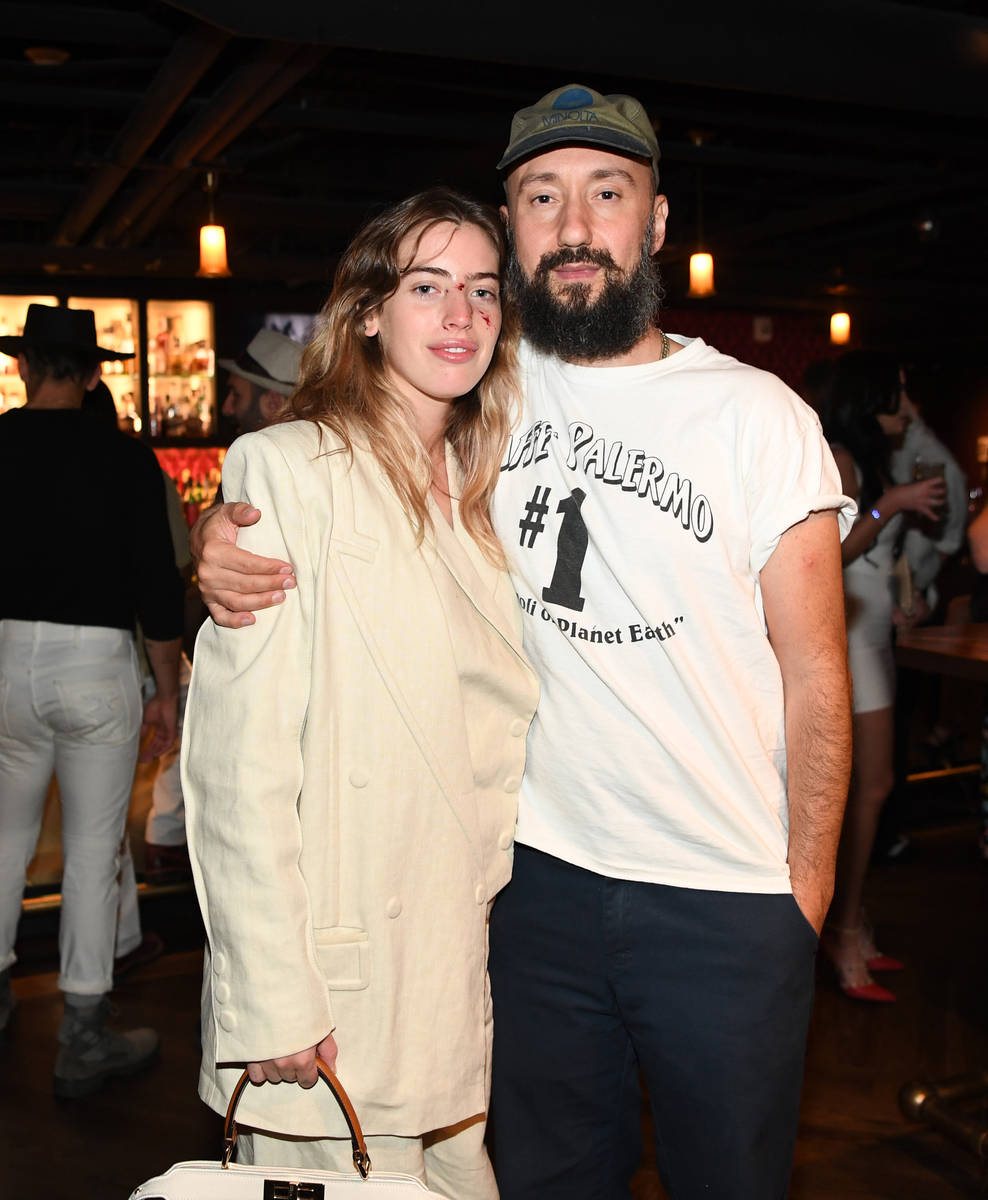 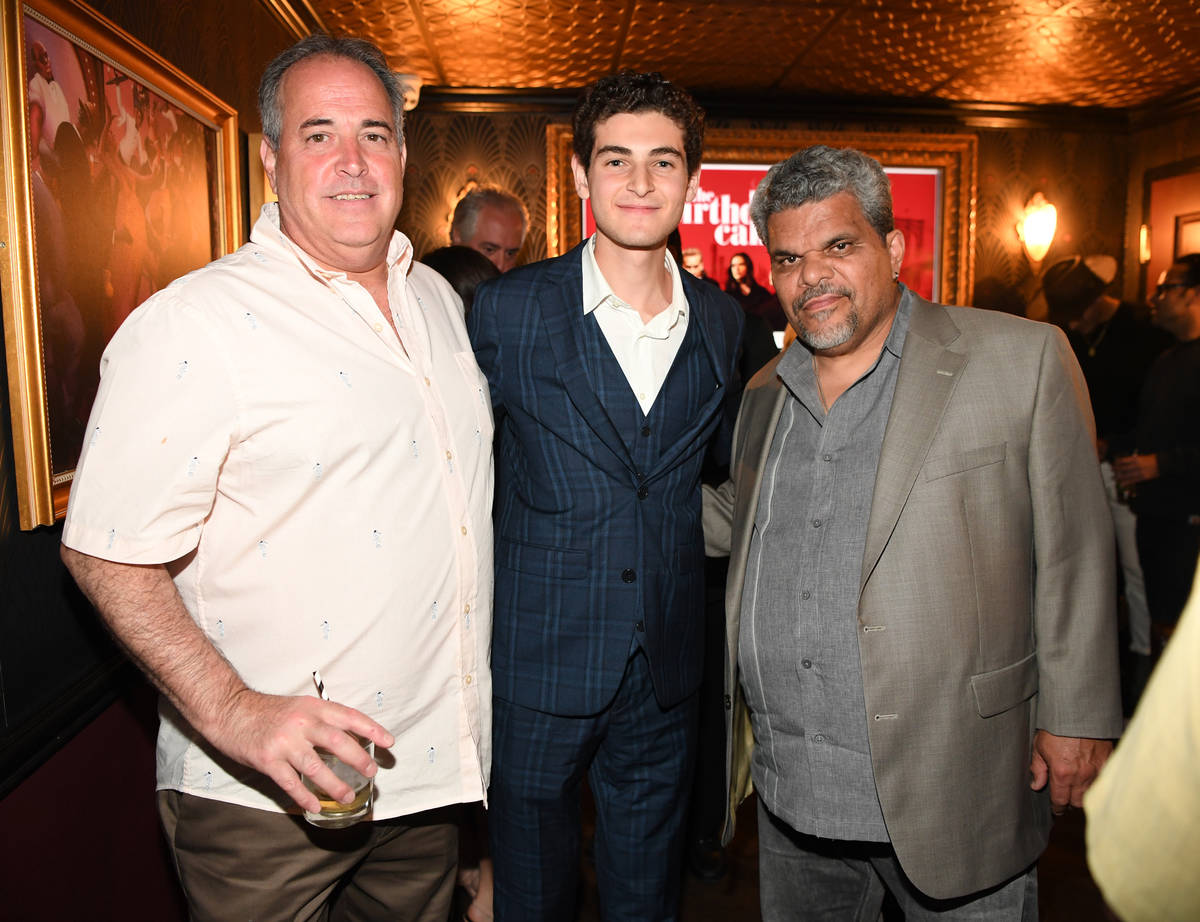 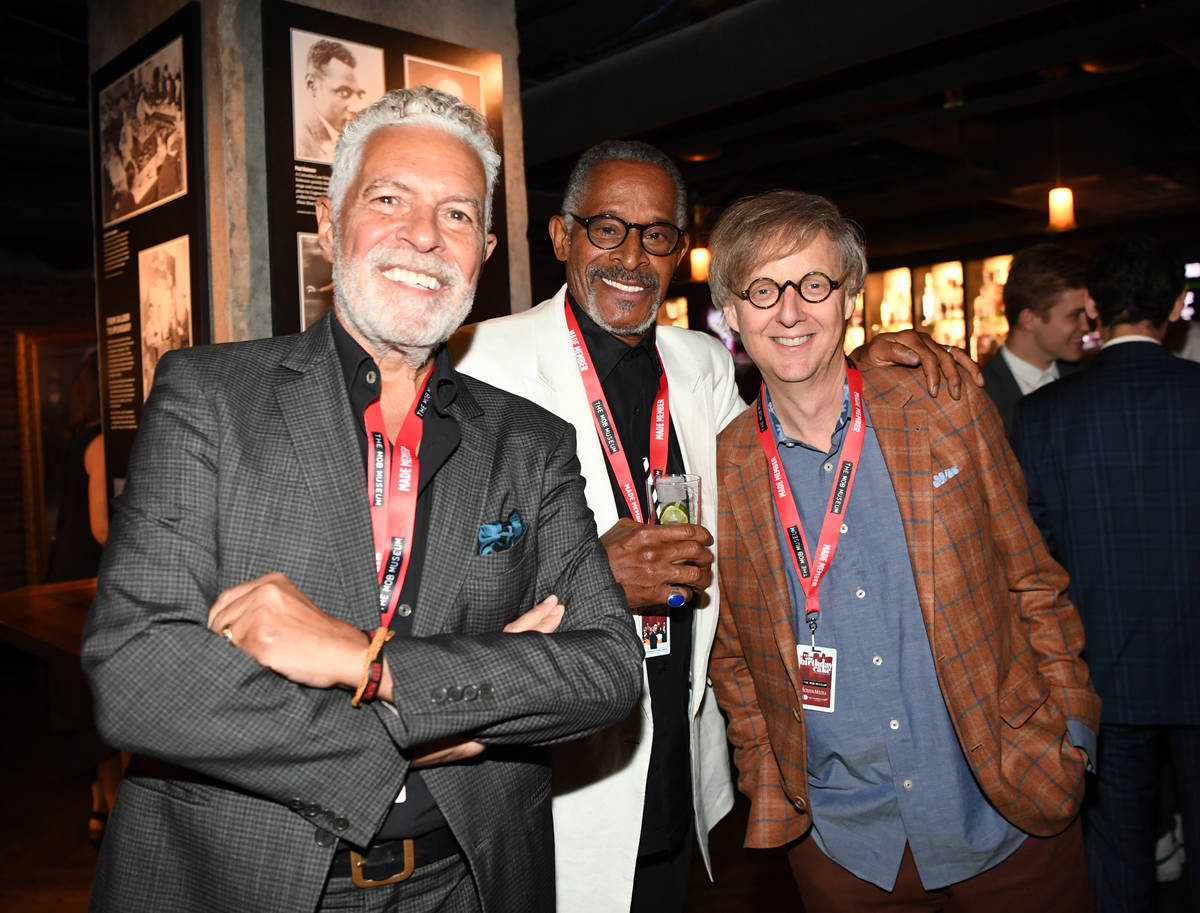 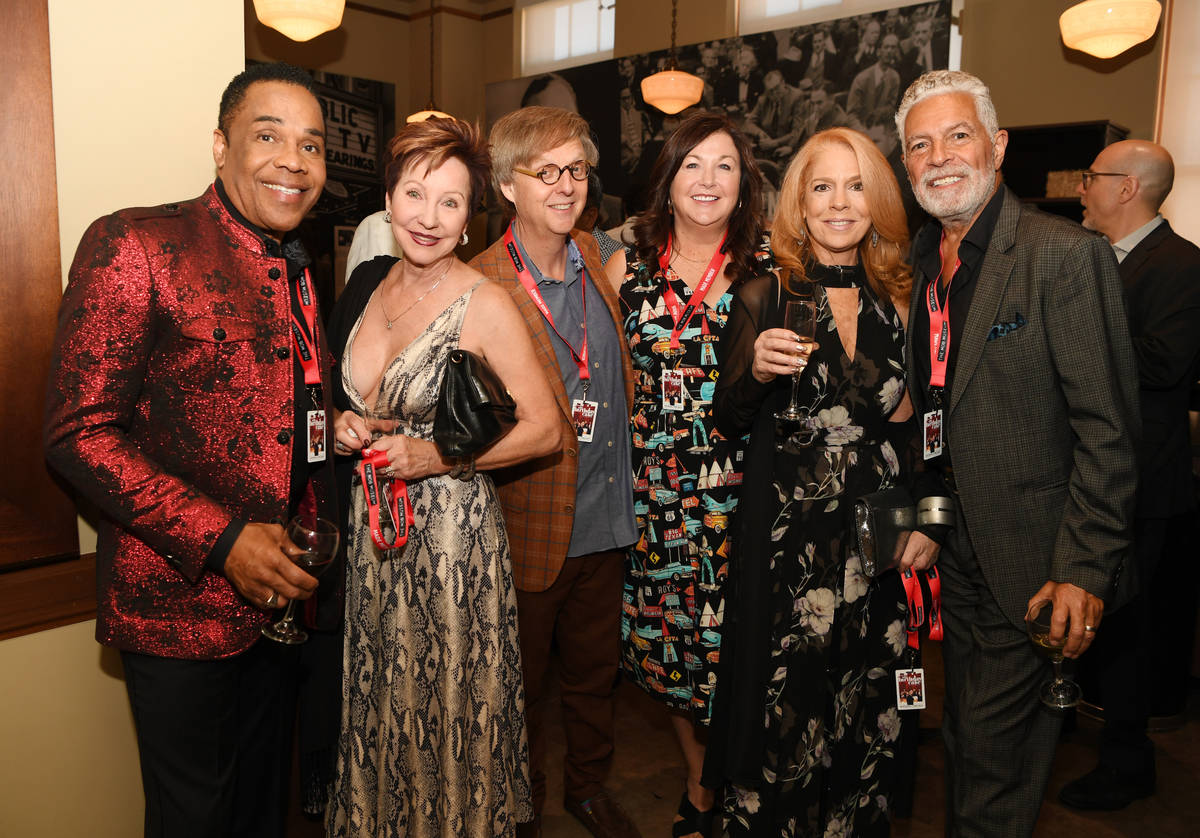 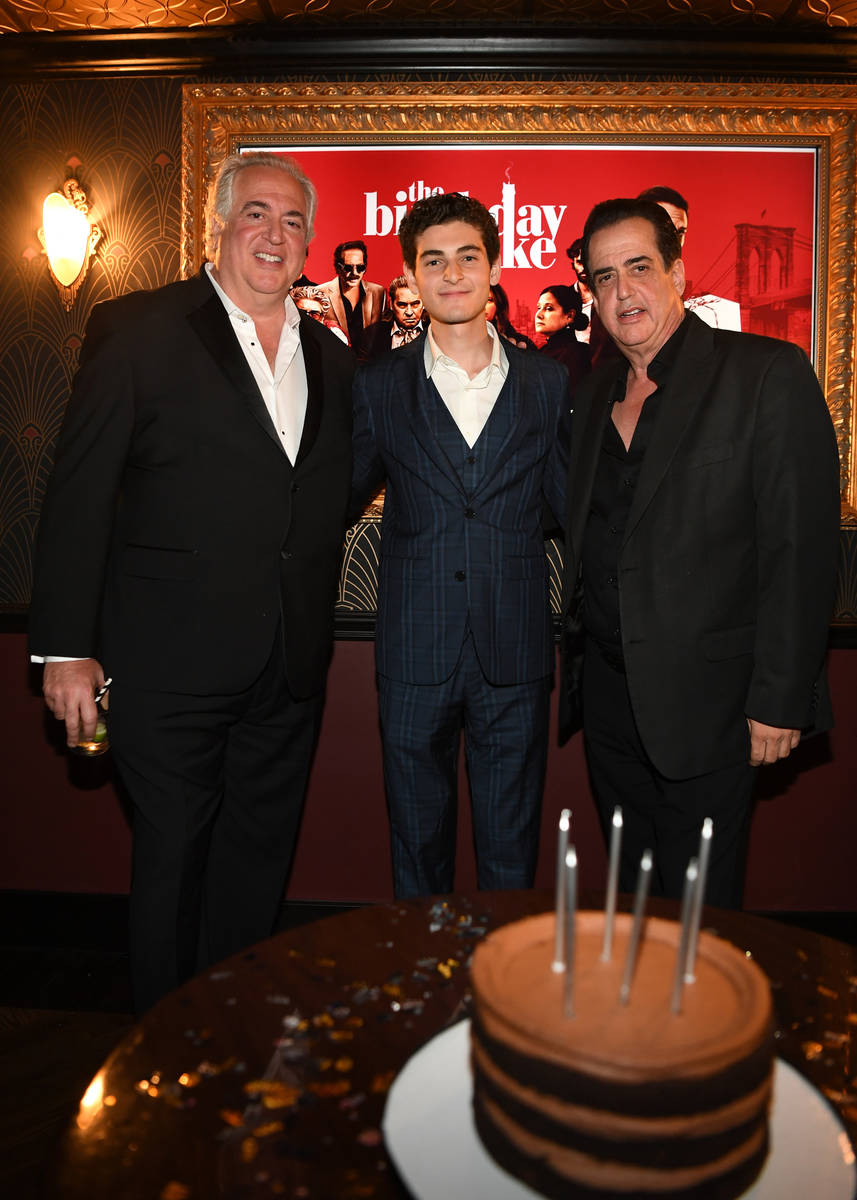 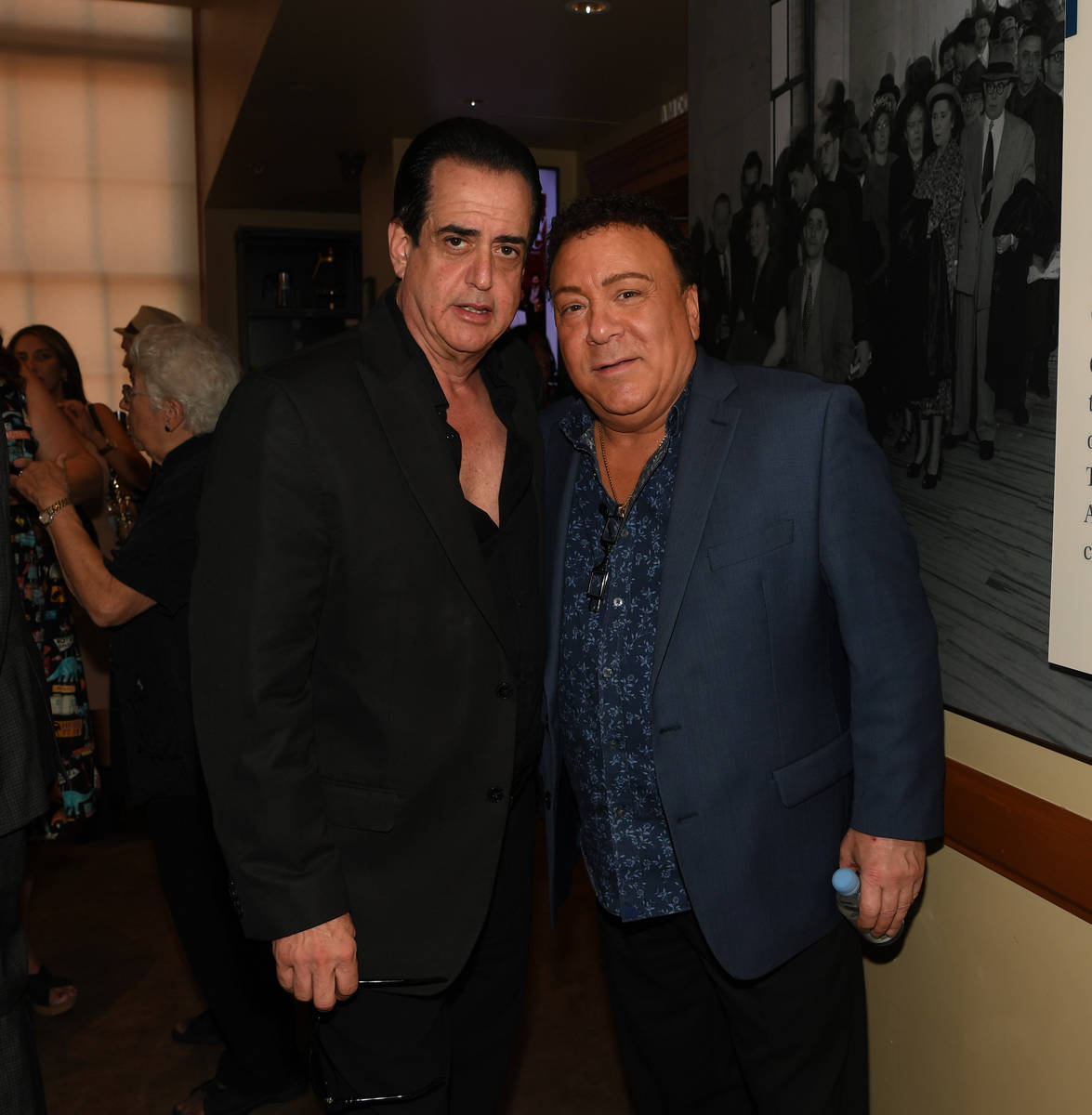 Actor Frank Vallelongo and entertainer Frankie Scinta attend the world premiere of feature film "The Birthday Cake" at The Mob Museum on June 11, 2021 in Las Vegas, Nevada. (Photo by Denise Truscello/Getty Images for The Mob Museum) 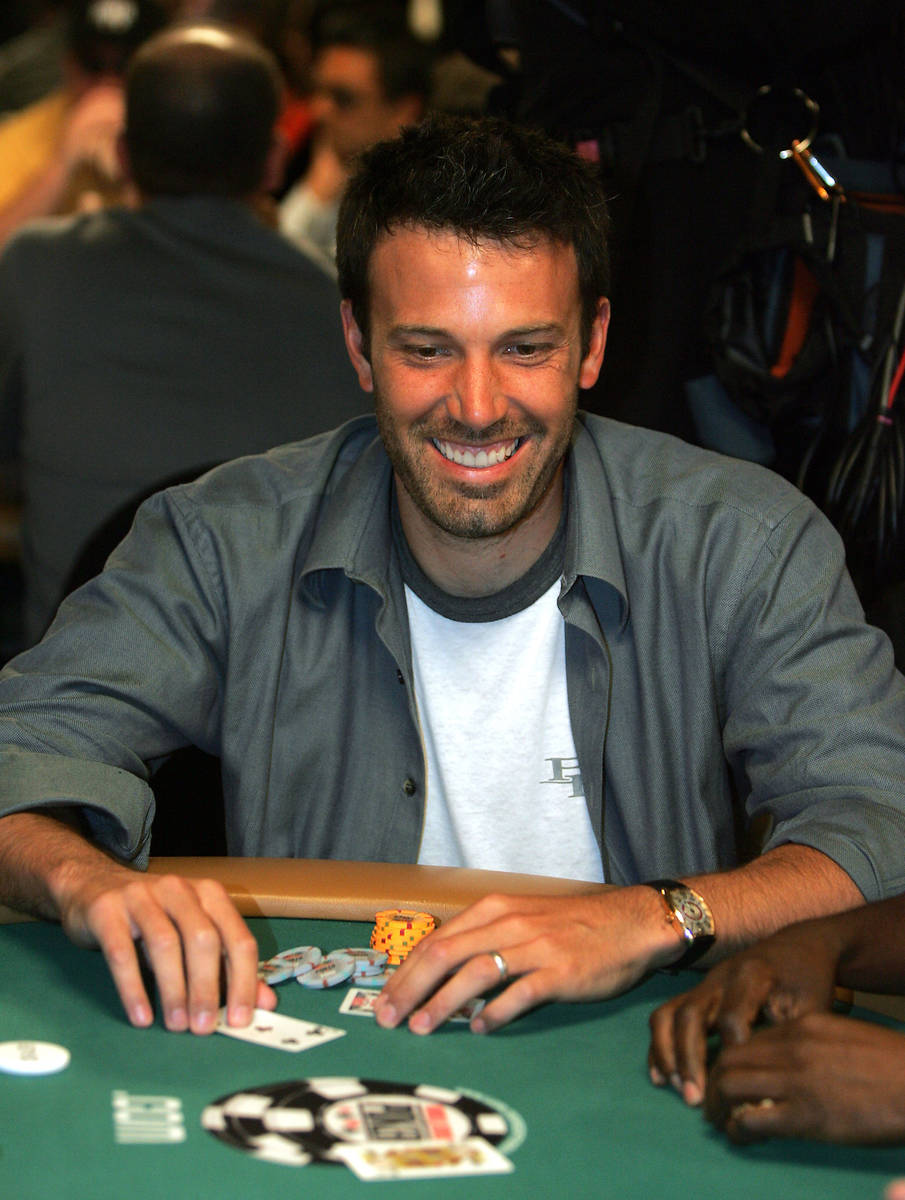 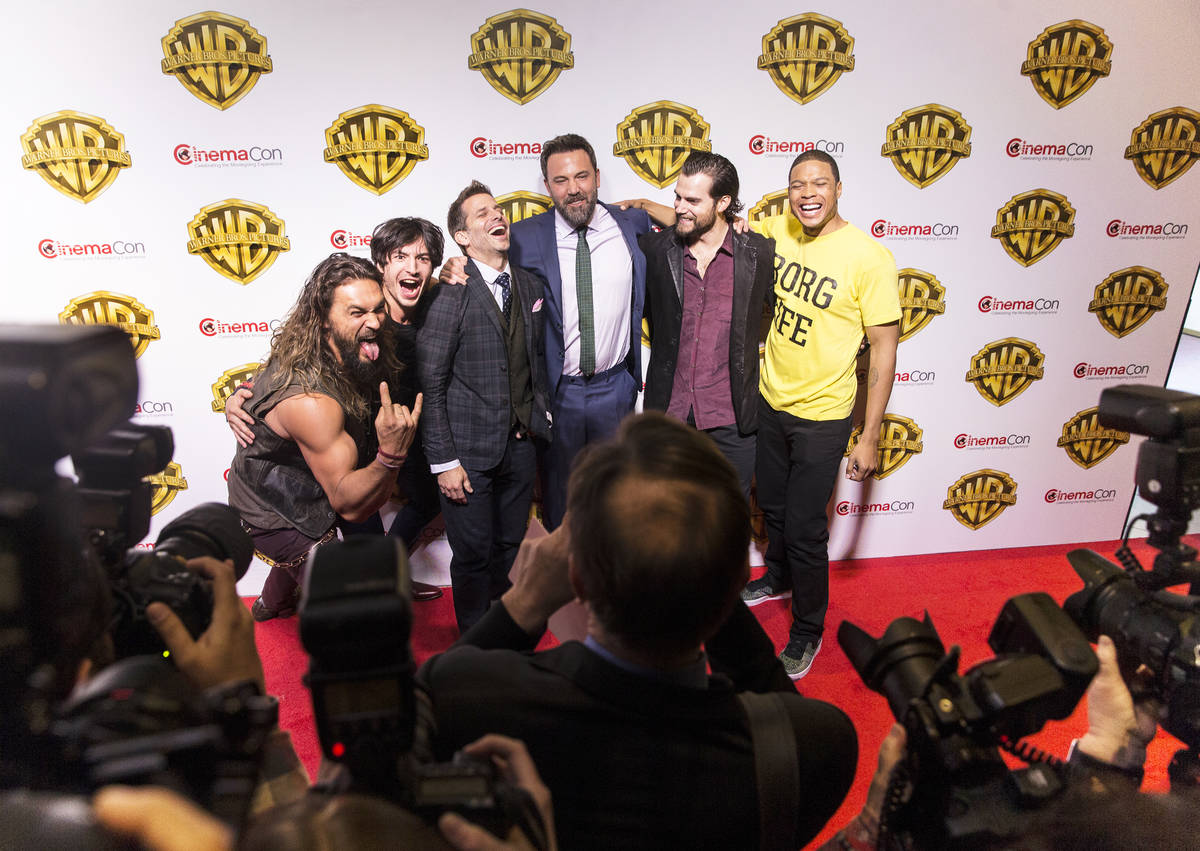 These are unrelated developments.

Bieber is booked at Encore Theater on July 9. A handful of tickets are still up on the Ticketmaster.com site, ranging from $1,525-$3,450 (for context, you can get a full set of rims and tires for a ‘67 Mercury Cougar in that price range).

Bieber has never played the theater, and his show is listed as a one-time-only performance. He’s back in VegasVille on Feb. 22 on his rescheduled tour stop at T-Mobile Arena.

Affleck was spotted with Lopez’s mom, Guadalupe Rodriguez, at the Wynn last week. A hotel spokeswoman has confirmed he was at the hotel last week. Affleck is directing and starring in a yet-untitled movie. TMZ had the original report of Affleck on the Strip. People adds that Rodriguez has a cameo in the film. She was spotted at a slot-machine bank.

Affleck and JLo have rekindled their relationship, a pairing dubbed “Bennifer 2.0.” They were publicly a couple starting in 2003, became engaged, and called off the romance in 2004.

For a deeper Vegas connection, Lopez of course has headlined at Zappos Theater and there are persistent rumors of her returning to residency on the Strip at some point (side note, Jerry Lewis just loved Lopez).

Affleck is a well-known to be a high-limit blackjack player, and in May 2014 was banned from playing the tables at Hard Rock Hotel. He said at the time he was caught counting cards, a no-no in Vegas casinos (unless you happen to be, say, Mat Franco).

“That is a true story,” Affleck told Vanity Fair at the time. “I took some time to learn the game and became a decent blackjack player. And once I became decent, the casinos asked me not to play blackjack. I mean, the fact that being good at the game is against the rules at the casinos should tell you something about casinos.”

Affleck was spotted at the tables in the Wynn high-limit room early Wednesday morning. Security personnel protected him from onlookers at least until about 3 a.m., always guarding the celebs, which should also tell you something about casinos.

No more delay of game

Terry Bradshaw is finally reassembling his stage show, which has been aptly titled “The Terry Bradshaw Show,” in September at Luxor’s Atrium Showroom. Details, and also an energetic catch-up with Mr. Bradshaw, are upcoming.

The Mob Museum hosted the world premiere of “The Birthday Cake,” a release by Screen Media due out Friday. Jimmy Giannopoulos directs, from a screenplay by Diomedes Raul Bermudez, Shiloh Fernandez and Giannopoulos.

You’ll likely notice deep scratches along McGregor’s face in the photos from the event. As she posted, those came from an overzealous canine, and she wound up in the emergency room a half-hour before the red-carpet walk at The Mob Museum.

Stars featured, but not in Vegas on Friday, include Ewan McGregor, Val Kilmer and Lorraine Bracco.

The film has a mob tilt, hence the party at The Mob Museum. The script centers on Gio, the son of a murdered mob figure, and nephew of a Brooklyn mob boss. On the 10th anniversary of his father’s unsolved death, Gio brings a cake his mother had marked to his uncle’s house as a way to make the occasion. During the visit, he begins to sort out the violent details in his father’s death.

The Vegas entertainment community was represented, too, by Clint Holmes and Kelly Clinton-Holmes, Frankie Scinta, Antonio Fargas, Mac King and Earl Turner. A mob scene of a different order. Good to see the shots of the maskless dignitaries.

We do expect headlining comedian George Wallace to be back at Westgate Cabaret. Look for him in September, his return alongside that of Barry Manilow in International Theater. Wallace has a wicked-funny opening planned.

We are also getting word of a show planned for Internatioal, “Love Muzik,” which has set July 3 opening. This show is to run

Fridays, Saturdays and Sundays, rotating 1990s-era R&B artists every 12 shows. However, the contract has not yet been finalized at this writing.

“Soul of Motown,” with its great cast and lineup of Motown-era hits, and the popular magician Jen Kramer have already returned to Westgate Cabaret. There is some aggressive tire-kicking at the Cabaret from Bronx Wanderers, looking for a suitable home after they were hustled out of Harrah’s Showroom in the Caesars Entertainment entertainment cuts.

There is no firm word yet on plans for “Sexxy’s” return. Jen Romas’ adult revue continues to perform at Larry Flynt’s Hustler Club, where it has burned up the place since the pandemic reopening in November.

“Crazy Girls” producer Norbert Aleman is moving the famous bronze statue of the cast’s derrieres from Planet Hollywood to an undisclosed location (OK, my loft) at 8 a.m. Tuesday. Aleman is keeping the famous 2,000-pound visage for if and when “CG” returns to the stage. There are interested parties in this topless party, but no deals imminent. “CG” closed at Sin City Theater, either ending or pausing a 34-year run on the Strip.

Mike “Beans” Benigno, who hits the drums like they owe him money, hosts “Sex, Drums and Rock ‘N’ Roll” at 9 p.m. Wednesday at The Space.

The title sounds like a pretty good weekend in VegasVille. In fact, this is a whole live-music experience summoning the percussive artistry of John Bonham of Led Zeppelin, Tommy Lee of Motley Crue, and Dave Grohl of Foo Fighters, among others.

Benigno is the drummer in “MJ Live” at The Strat Showroom, and is also in the core band for Mondays Dark. The artist commonly known as “Beans” has been featured, too, in “The World’s Greatest Rock Show,” which rocked The Strat for a year or so before closing in mid-2018.

Dai Richards is on vocals and Chris Cicchino on guitar (both of Tenors of Rock and also the cover band Original Chaos), with Dan Grennes (The Windjammers) on bass.

Tickets are $20 (not including fees) at TheSpaceLV.com. Beat the rush (and rock with Rush, as Pardy takes on Neil Peart’s role), and snare a ticket (rimshot!).