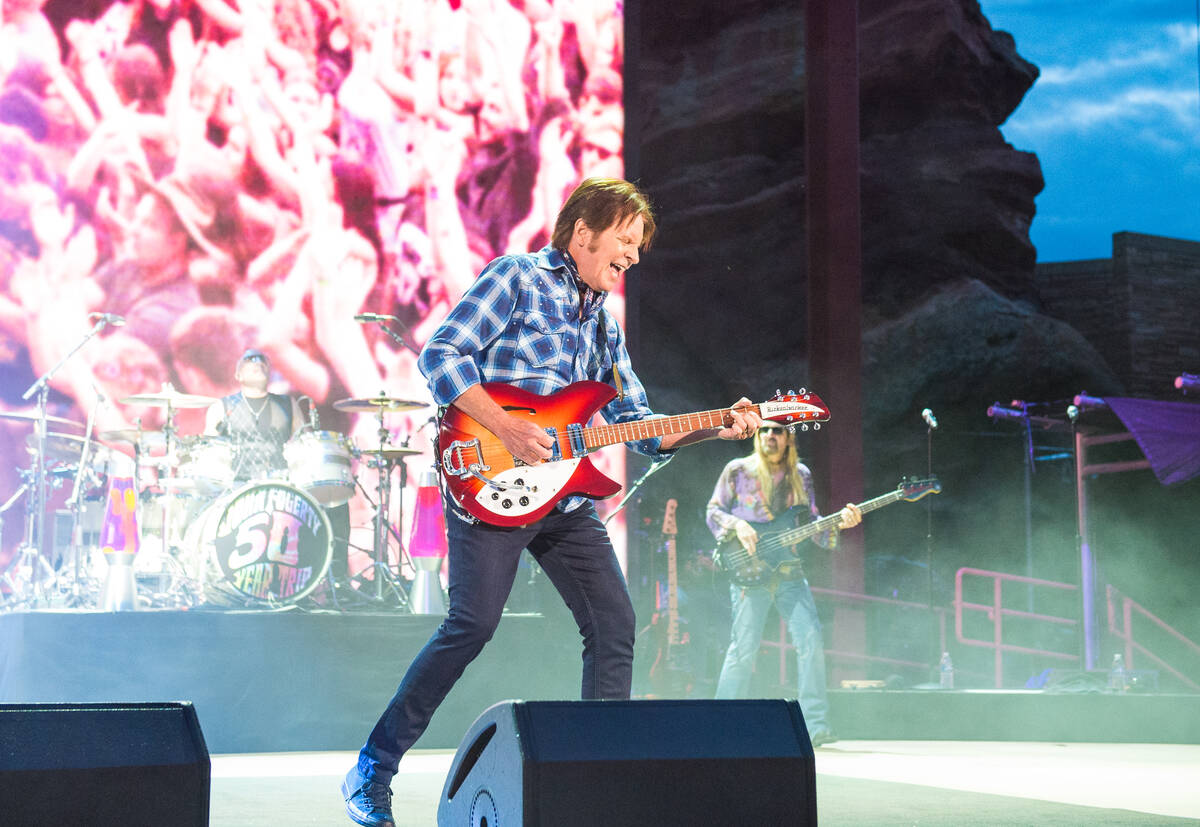 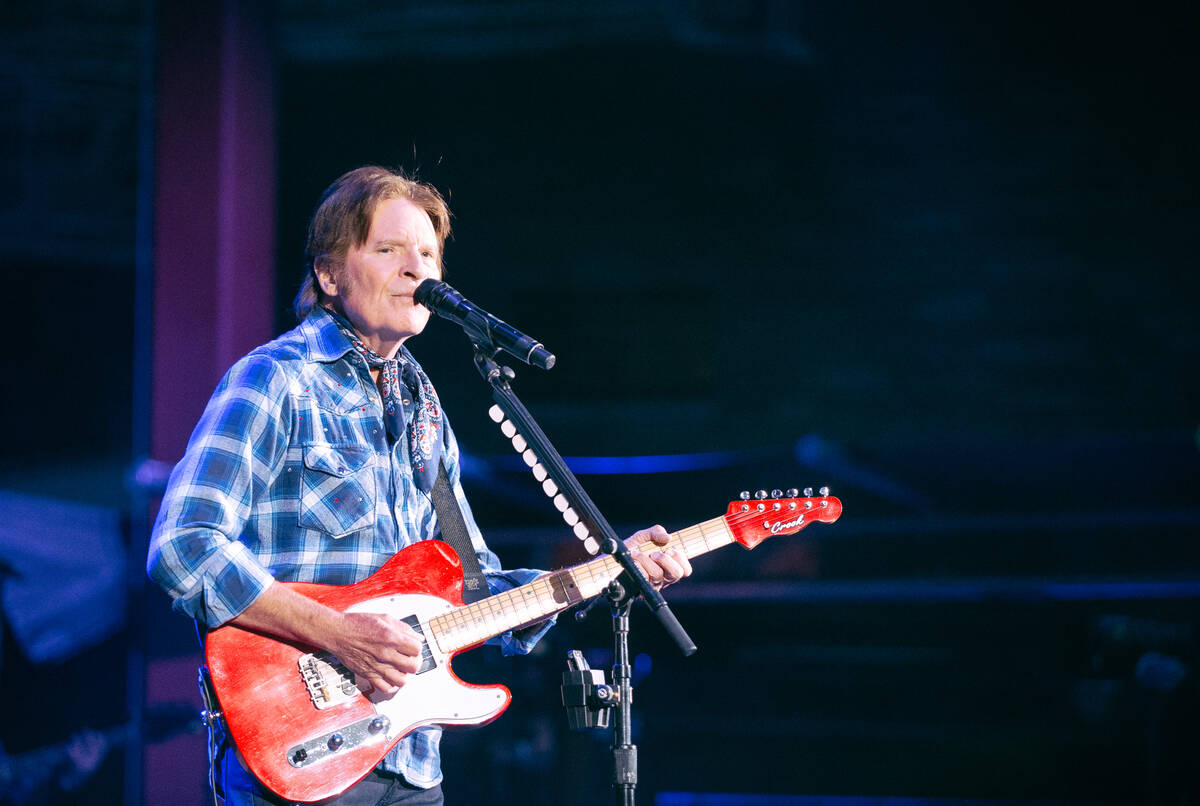 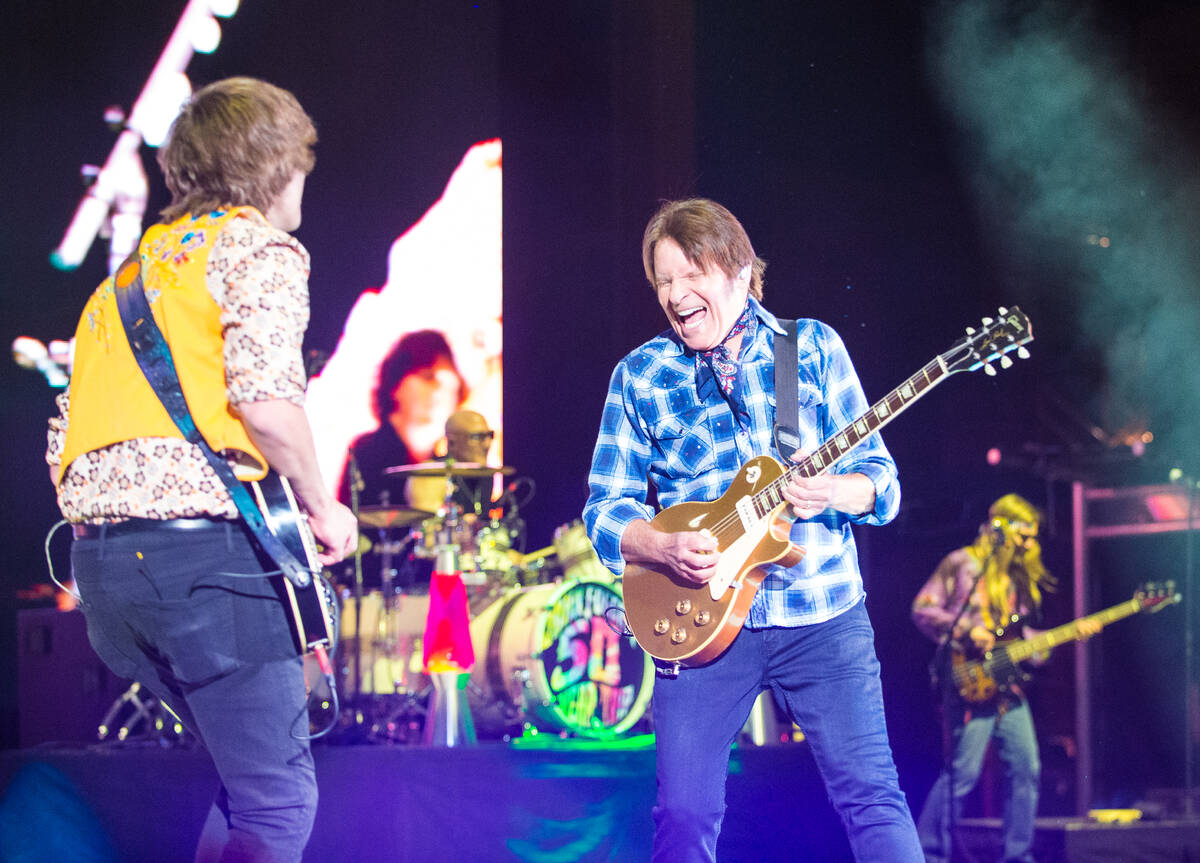 John Fogerty’s “Travelin’ Band” rock revival is sitting for a spell. Fogerty is back at the Encore Theater at Wynn Las Vegas, his fourth year at the venue. This run continues through Oct. 16.

Expect the hits, and a familial feel, as Fogerty dips into his Creedence Clearwater Revival catalog and samples his solo career. Fogerty and his backing band have revived such classics as “Fortunate Son,” “Proud Mary” and “Suzy Q” from his Creedence days, and “Centerfield” from his solo career. He’s also performed a rowdy version of Little Richard’s “Good Golly Miss Molly.”

As the 76-year-old rock ’n’ roller says, “I’ve got such a large repertoire, I’ll be playing the songs the fans know and also some deeper cuts from albums that were maybe not in the Top 40.”

Highlights from our phone chat this week, as Fogerty took a break from rehearsals:

Johnny Kats: Generally, John, how do you feel and how does it feel to be back onstage.

John Fogerty: As you can imagine, after not doing it for a year and a half, there was a learning curve in coming back that actually surprised me.

What has surprised you?

Well, I have been very cautious, of course. I’m vaccinated. I’m on that side of the fence. If you ask that question, I’ll answer that. I certainly defer to other people’s feelings and how they live in the world, but yes, I’m surprised that people don’t want to wear masks and don’t want to get vaccinated. It just sort of boggles my mind. I really don’t understand it. I don’t think it’s the same as a political choice, or the fact that I want to dye my hair green or anything like that.

Are you at all writing about this?

Well, I’m just hoping that people will get on board with it. That’s that’s really all I have to say, because at some point, the fact that there are a bunch of unvaccinated people around, and that starts to impact all the rest of us, that worries me.

But no protest song is in the works?

I think there’s so much material there to begin with. I don’t want to be condescending. Now, you know, if I was the old John Fogerty, the one who wrote “Fortunate Son,” I can imagine I’d be yelling and screaming and pointing fingers. But I’m older, and I’m different. I’ve become more amenable to understanding other folks, which I suppose might be surprising.

Your sons, Shane and Tyler, are they going to be back with you in this show?

Absolutely. Shane, of course, is onstage all the time, and Tyler much of the time. I get to play several songs with both of them, and that’s really a lot of fun. I do have to mention that Shane just got married this past weekend. He married his beautiful fiancee, Lacee, in Scottsdale. We had the wedding ceremony and dinner, and at the after-party after we had the whole family onstage together, with my wife, Julie, and our daughter, Lindsay, and her little daughter, Via. That had never happened before, so that was pretty cool.

And they’re having their honeymoon in Vegas?

Of course (laughs). Oh, wow, yes. They have been together for years, but for the first time they are man and wife in Vegas.

You’ve now played several years on the Strip. What are your thoughts about Las Vegas today, compared with when you started your residency shows?

Well, I think a person from my musical territory playing Vegas is not that big a shock anymore. I’m thinking back to the 1950s, when Frank Sinatra and Sammy Davis Jr. were here, and they were the legendary performers who I have a lot of reverence for. They seemed to define Las Vegas. I have obviously been in a different musical territory as a rock ’n’ roller, with kind of a chip on my shoulder and having an attitude, I guess you could say, about Las Vegas. I don’t feel that way anymore. I don’t have to prove anything anymore, with all of the rock ’n’ roll people coming through. Now I’m one of the revered acts playing Las Vegas.

It sounds like you have gone from an anti-establishment rock band to part of the establishment.

I was going to say, I’ve become Sinatra (laughs). I can only wish, and I mean that in all deference.