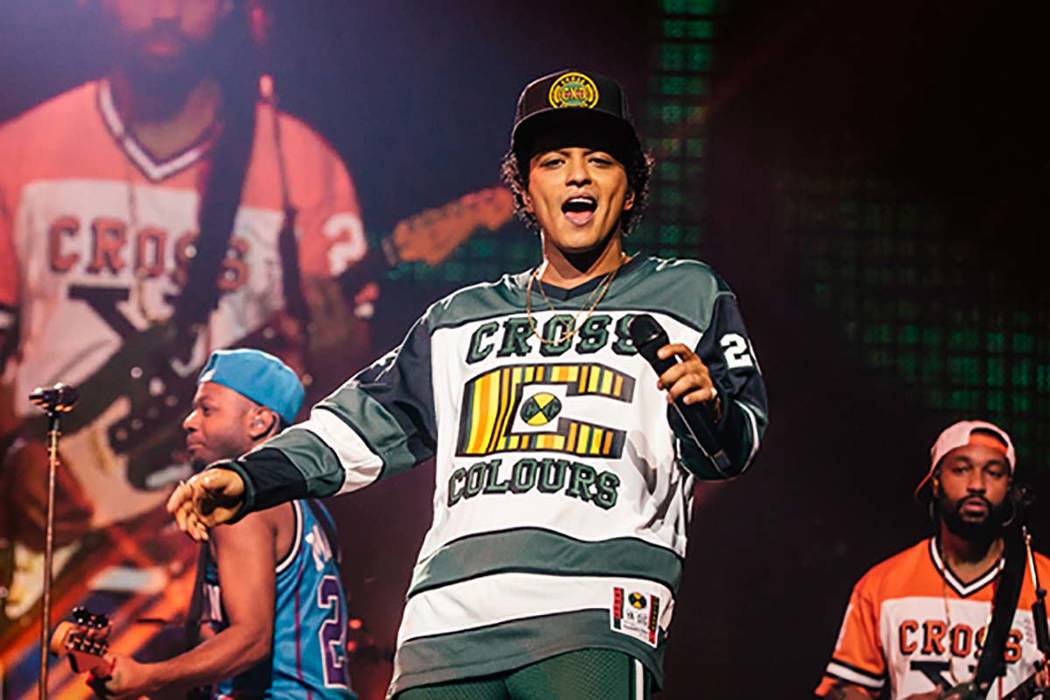 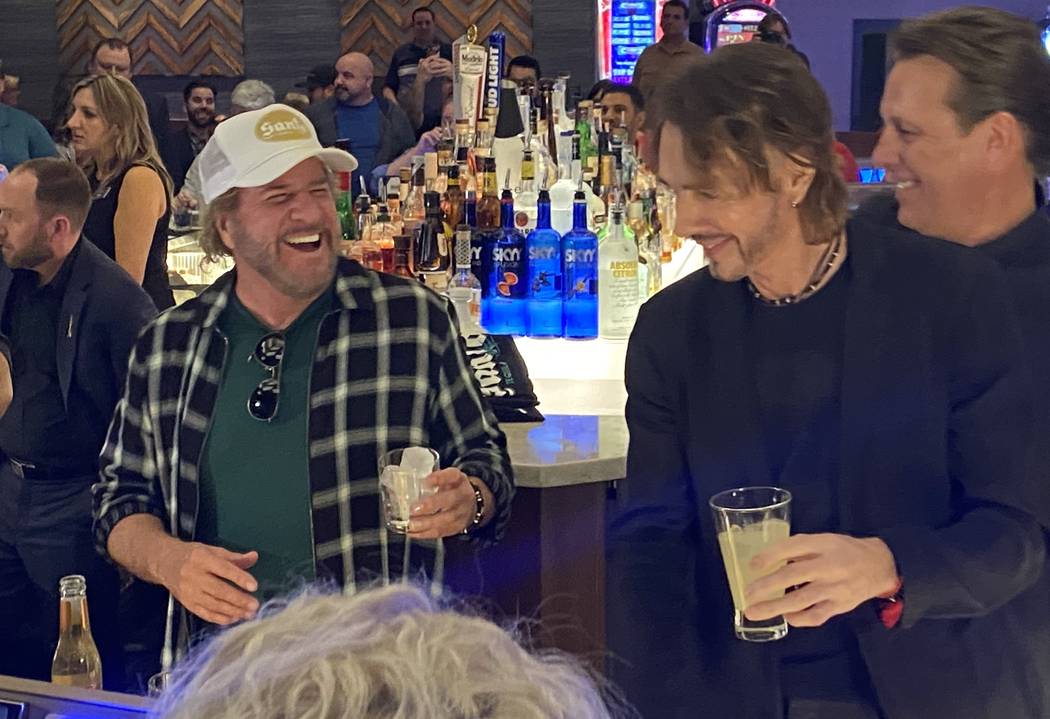 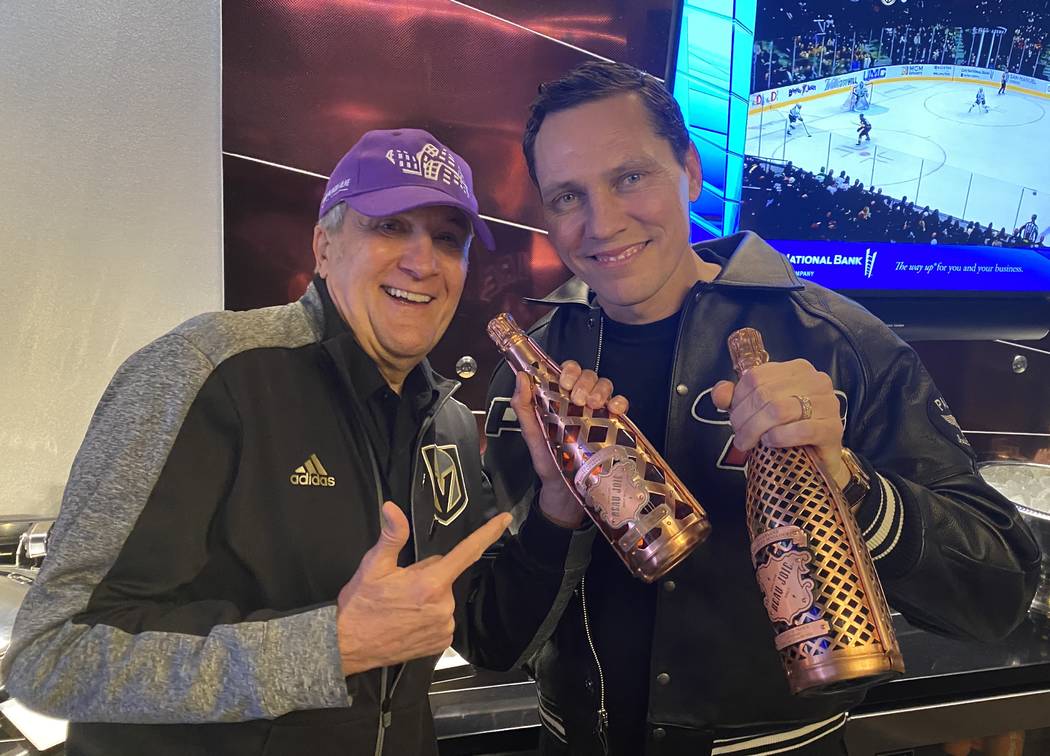 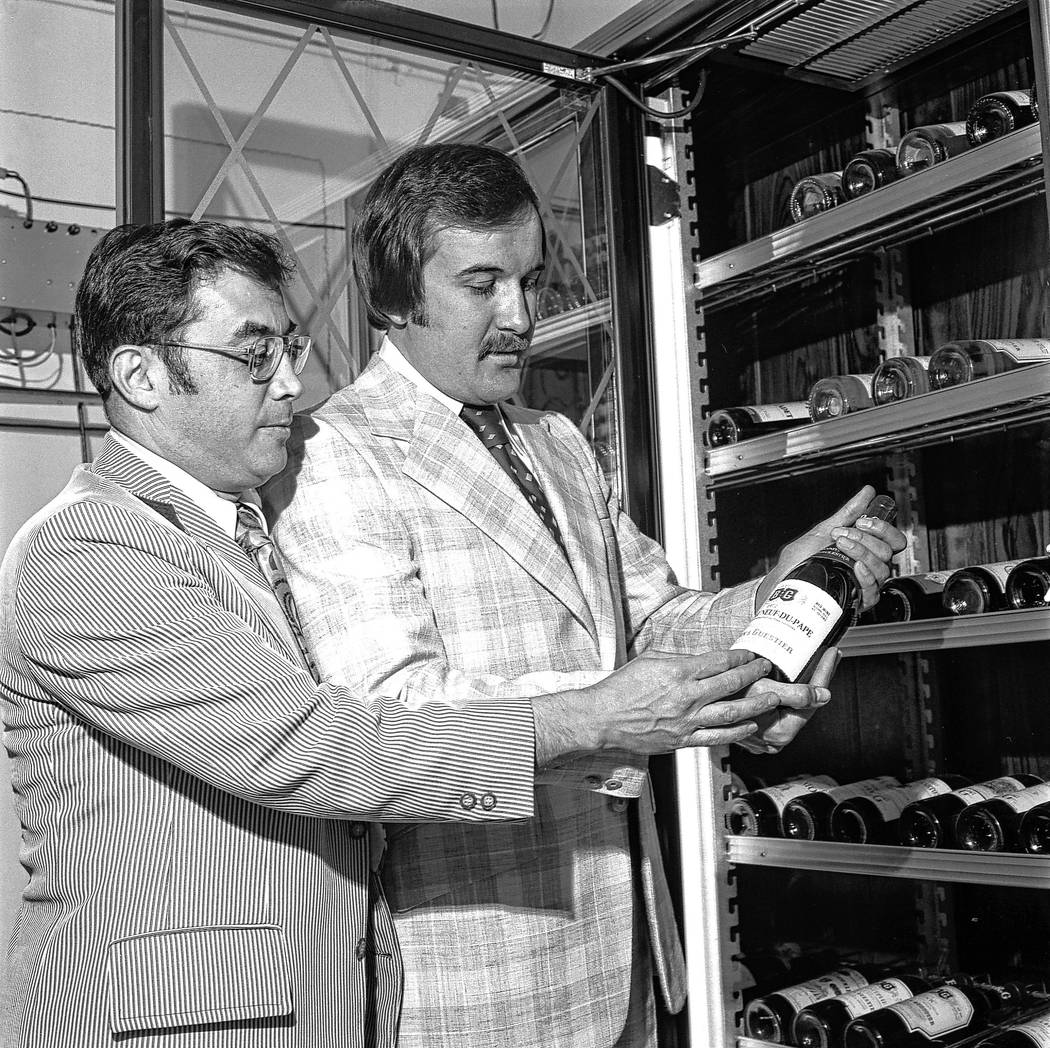 Jerry Vallen and Larry Ruvo examine a bottle of wine in 1974. Their efforts yielded UNLVino, which celebrates its 30th anniversary this year.

The annual Keep Memory Alive Power of Love live auction is always a stunner, but the event has reached new heights this year.

Saturday night’s gala is offering a trip to Mars.

We speak of Bruno Mars, specifically. The pop superstar headliner at Park Theater is offering one of the eye-popping auction experiences available at the 24th annual philanthropic event at MGM Grand Garden.

Up for bid in the live auction is a Mars experience offering 10 guests access to an upcoming rehearsal, sound check and show starring Mars at Park Theater. There is no listed price, but a performance by Mars can be termed priceless. Mr. 24K Magic typically commands at least $2 million for a full private concert (though the performance being auctioned is a ticketed show).

Also on the live-auction list: the signed shin pads, glove and jersey Vegas Golden Knights goalie Marc-Andre Fleury wore when he made his famous save against the Toronto Maple Leafs on Nov. 19 at T-Mobile Arena. The spectacular save, possibly the greatest of Fleury’s career, led to a 4-2 Golden Knights victory.

The event is once more a benefit for the Cleveland Clinic Lou Ruvo Center for Brain Health, to help the facility provide services for those suffering from such neurocognitive disorders as Parkinson’s, Alzheimer’s and Huntington’s diseases; multiple system atrophy; multiple sclerosis; and frontotemporal dementia and related disorders.

Outside of the gala, donations can be made at the Keep Memory Alive website at www.keepmemoryalive.org/get-involved.

Event co-founders Larry and Camille Ruvo are again heading up this year’s program.

The need for support of Power of Love is as strong as ever. The Ruvo Center at Symphony Park relies on the event to sustain its world-class care.

“I know people we reach out to receive a lot of charitable requests, and I just repeat the same story: We lose money every time we see a patient on Medicare or Medicaid, about 78 cents on every dollar,” Larry Ruvo said Wednesday afternoon. “When people hear these stories, it resonates. Hardly anyone has said no. They are helping us because of that need.”

Last year the clinic was host to 34,000 patient visits, and supported 16,000 caregivers

The Mars contribution is but a facet — albeit a fancy facet — of the night’s program. Pop and rock legend Neil Diamond is this year’s celeb honoree. Performers booked include the ever-rocking Sammy Hagar, R&B star Toni Braxton, country-music artist Billy Ray Cyrus, producer-recording great Kenny “Babyface” Edmonds, rock singer/songwriter Chris Isaak, and pop artist/producer Andy Grammer have all been booked. Presenters scheduled to take the stage include late-night TV host and former Vegas resident Jimmy Kimmel, who has his own comedy club at Linq Promenade; dance great Derek Hough, heading up the upcoming Las Vegas residency “Derek Hough: No Limit;” and Kelsey Grammer, six-time Emmy Award winner famous for his role as Frasier Crane and a supporter of the Ruvo Center.

Celeb chefs Wolfgang Puck and Masaharu Morimoto lead the multicourse dinner, itself a show-within-a-show that serves upward of 1,600 guests.

Along with honoring Diamond, KMA will present the 2020 Community Leadership Award to Dr. Miriam and Sheldon Adelson for their extensive philanthropic support and contributions to medical research, education and many Jewish causes and organizations.

The couple are longtime supporters of Ruvo’s efforts to combat brain disorders. As Ruvo says, “When I had an idea that I thought would change the course of how neurodegenerative disease was treated, Miriam and Sheldon were immediately on board and were instrumental in supporting Keep Memory Alive in its earliest days.”

Elsewhere on the Power of Love’s impressive live-auction lineup:

— An afternoon with “Bar Rescue” star and best-selling author Jon Taffer. Four guests will fly Taffer’s private jet to Frey Ranch Estate Distillery in Fallon to see where his favorite homegrown whiskey is made, have lunch and jet back to Vegas.

— Music with Hagar: A trip to the Red Rocker’s home studio in Northern California includes a first-class flight to S.F., hotel and ground transportation and a recording session with Hagar himself. You will produce, record, mix, master and film this song, which is either a cover or original. As a wise man once said, you’ll have the best of both worlds.

The Review-Journal is owned by the family of Dr. Miriam and Sheldon Adelson.