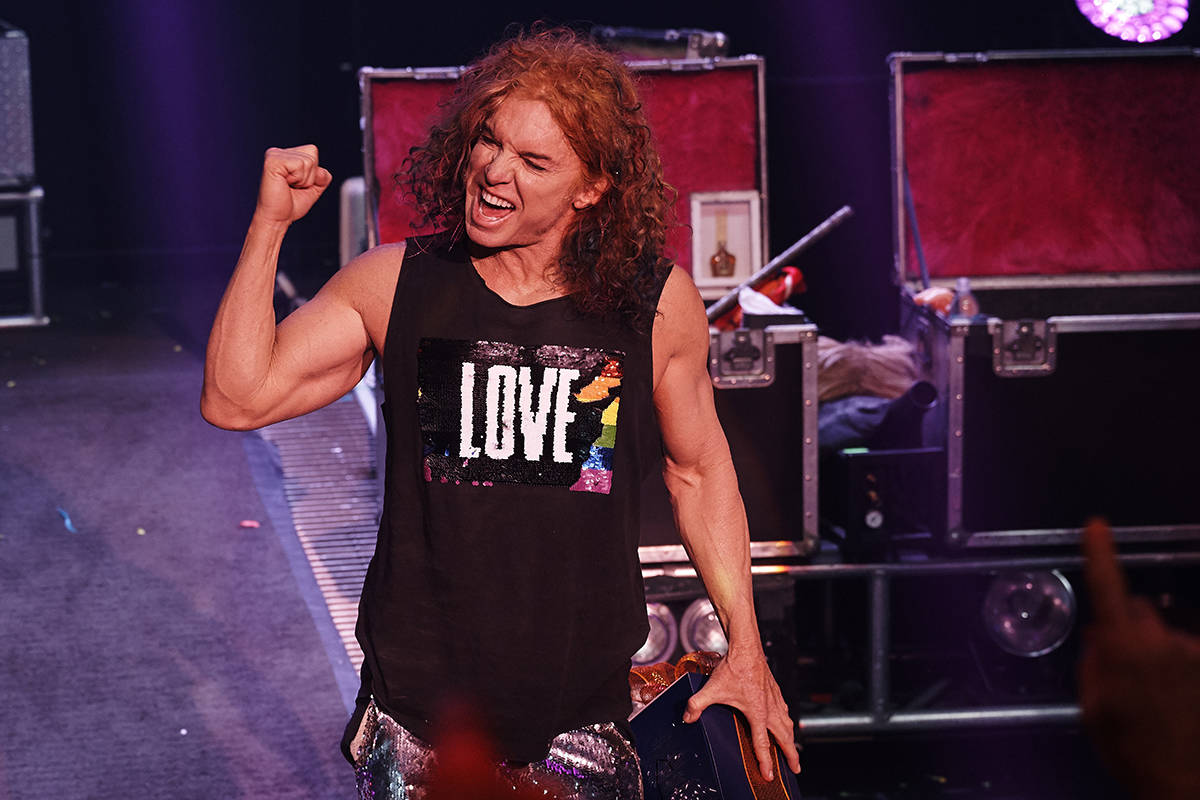 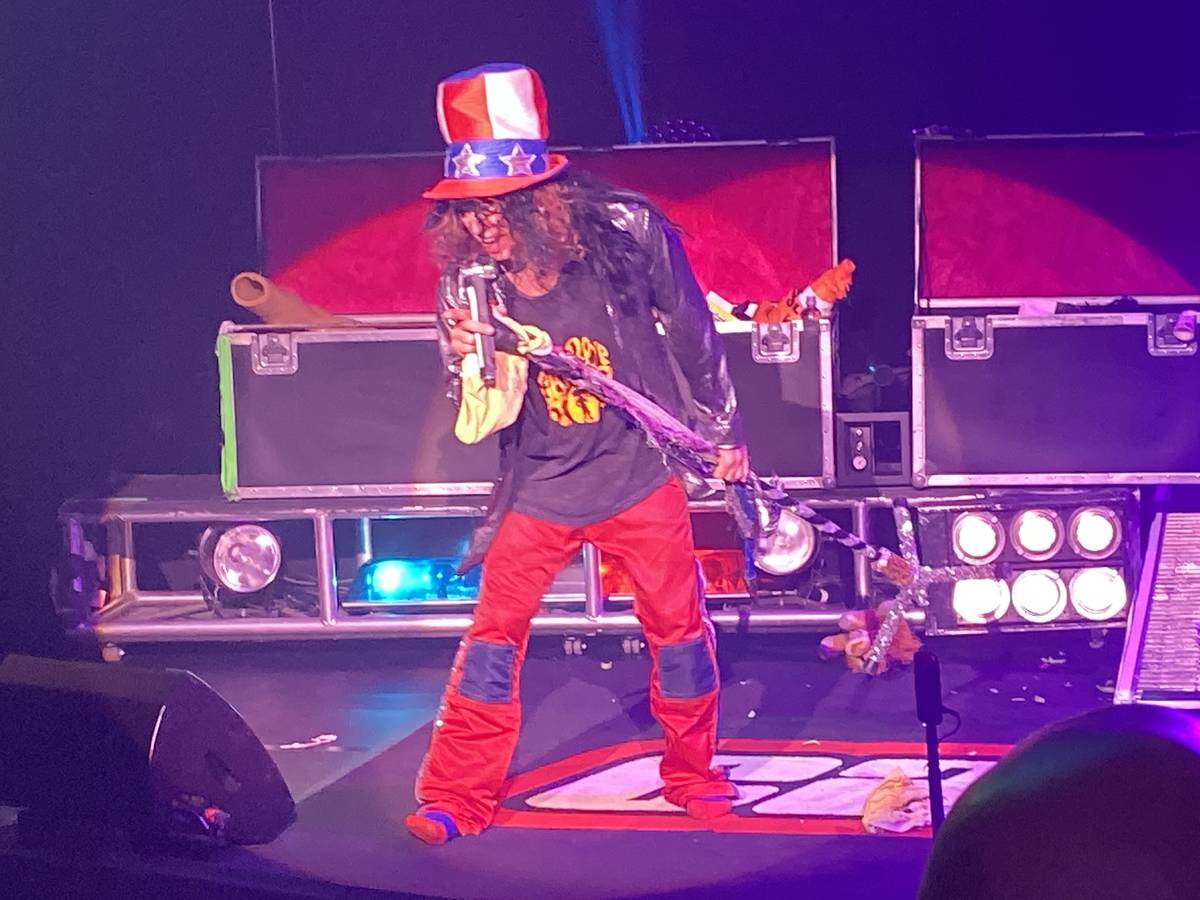 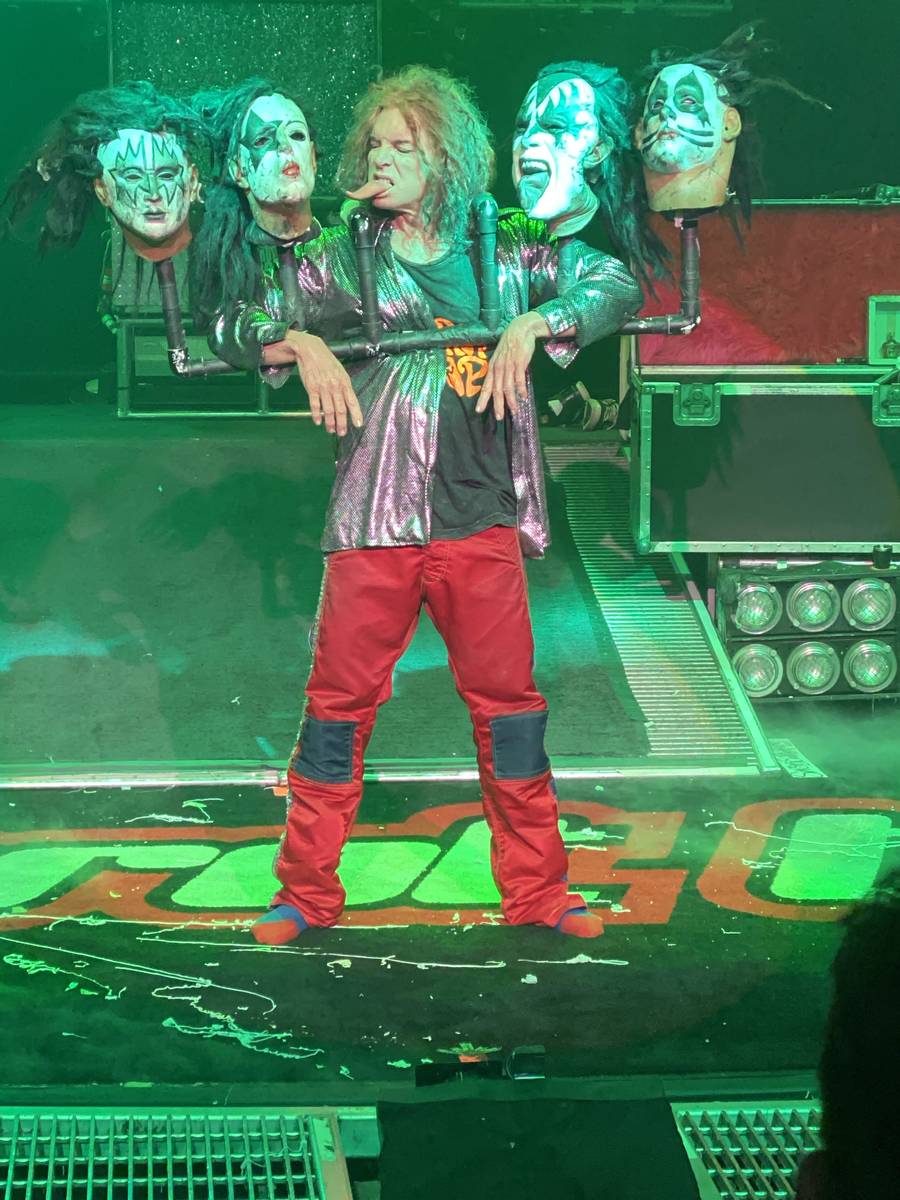 I haven’t told the story in a very long time, if ever, about how and when I met Carrot Top. It was about 22 years ago, when Scott Thompson (the comic’s legal name) was a rotating headliner at MGM Grand’s Hollywood Theatre, which is now the David Copperfield Theater.

My editors in those days mapped a plan for when I should watch and write about this red-maned prop comic. I practiced some passive resistance. “What about next Saturday?” the editors asked. “Ah, I am planning to be at ‘Forever Plaid’ at the Flamingo,” I would say.

“What about April 26?” “That’s Wayne at the Stardust.” “What about next January?” “I’m at the Jimmy Buffett tribute at Gold Coast.”

And on it went. I was reluctant to see Carrot Top because I didn’t like his 1-800-AT&T commercials that were airing in those days. That was about all I knew about the prop comic. Inevitably, the time arrived when I was out of shows and ventured backstage to chat with the comedian before he took the stage.

It was evident pretty quickly that I was wrong about this guy. I had fallen prey to a classic case of contempt before investigation.

I remember him being so sharp, telling me initially that he did not want to be the prop comic who held up a shoe and a horn and joked, “It’s a shoehorn! Get it?” The first prop he ever onstage was a Neighborhood Watch sign, “How are they going to watch the neighborhood when they can’t even watch their sign?” It’s bit he has recently revived, and it still gets a laugh.

I thought he was so different, and a real student of comedy. He talked passionately about such shared favorites as George Carlin and Steve Martin. He dipped into a Johnny Carson impression, “I did not know that!” which still kills me.

Then he took the stage and, for the first five minutes, destroyed the place. His Redneck Baby Carrier (a doll inside a 12-pack of Budweiser) was among the jokes that night. I could barely keep up for the laughing. He finally halted to ask how the crowd was doing.

Exhausted, was the answer from my seat.

More than two decades later, Scott Thompson is 56 years old and a dean among Las Vegas Strip entertainers. He’s rocked it for 15 years at Luxor, a leap of faith taken by the late resort visionary Felix Rappaport. In October, Topper’s Atrium Showroom residency was extended through 2025.

Then COVID cut down live entertainment, and for months those of us in the entertainment community wondered how the headliners would return. What would a pandemic Carrot Top show feel like, with everyone in the audience spaced out and wearing its own props, in the form of face covers?

We are finding out now, and Carrot Top’s show at Luxor is a testament to the value of entertaining audiences for almost a lifetime. Before he even arrived in Vegas, Topper performed for years at small clubs (including a makeshift room at a La Quinta Inn when he started), county fairs and college campuses.

Those thousands of shows and gave him a feel for a room, and for a crowd, that he is putting to use today. Carrot Top is performing for 250 people in a 1,500-seat venue, and loving it. In his show Monday night, he unveiled new material related to cultural changes in pandemic.

He unveils a new QR code for his set list, for audience members to scan later if they don’t get the jokes on first pass. That long list shows every single joke is the same theme, about a certain male body part, aside from a single entry marked “pool joke.”

He pretends to creep down the steps at the front of the stage, a violation the latest space-distance rule, daring security to bust him.

He features a stage assistant, the esteemed Marco Rossetti-Busa, in a video clip puffing heavily on a cigarette, which is to cover the spacious venue in theater smoke.

He also compares the same naughty lyric used by Led Zeppelin in “Whole Lotta Love,” and Freddie Mercury and Queen in “Tie Your Mother Down.” (Led Zep’s is directed at heterosexuals, Mercury’s isn’t.) This bit carries through a whole video comparison, then a detailed verbal explanation that runs comically long, before the comedian concedes, “I knew I should have stopped it at the video!”

Occasionally, the comic refers to himself on the theater’s big screens flanking the stage, remarking about his orange locks, “People ask if this is this a wig. Would I pick this as a wig?” It’s funny, and also a deft way to remind the crowd in far-away seats to check out those video panels.

And the catch is, Topper’s show plays well enough in Luxor Theater to be there permanently. Same could be said for “Fantasy,” which follows, if there were a way to add to the cast and production and turn it into a kind of “Lido 2.0” experience.

But the hotel is planning its “AGT” all-star show this fall, and that production will likely load in beginning in May. We expect, too, a resident production from the “AGT” crew in that room heading into 2022.

So it’s everyone outta the pool when that happens, with Carrot Top and “Fantasy” expected to return to the smaller, more familiar Atrium haunt.

After Monday’s show, the Topper and I chatted on the phone and revisited some of the bits, the new stuff he liked and what to work on. “I’m totally loving that theater,” the comedian said. “I don’t want to leave!”

One moment is holdover from the night we met, his Carson routine, when he looks off to the side for an unseen Ed McMahon and says, “I did NOT know that.” I shouted and clapped at that bit, and Topper said, “Oh! We have one Johnny fan out there!” And he knew who it was.