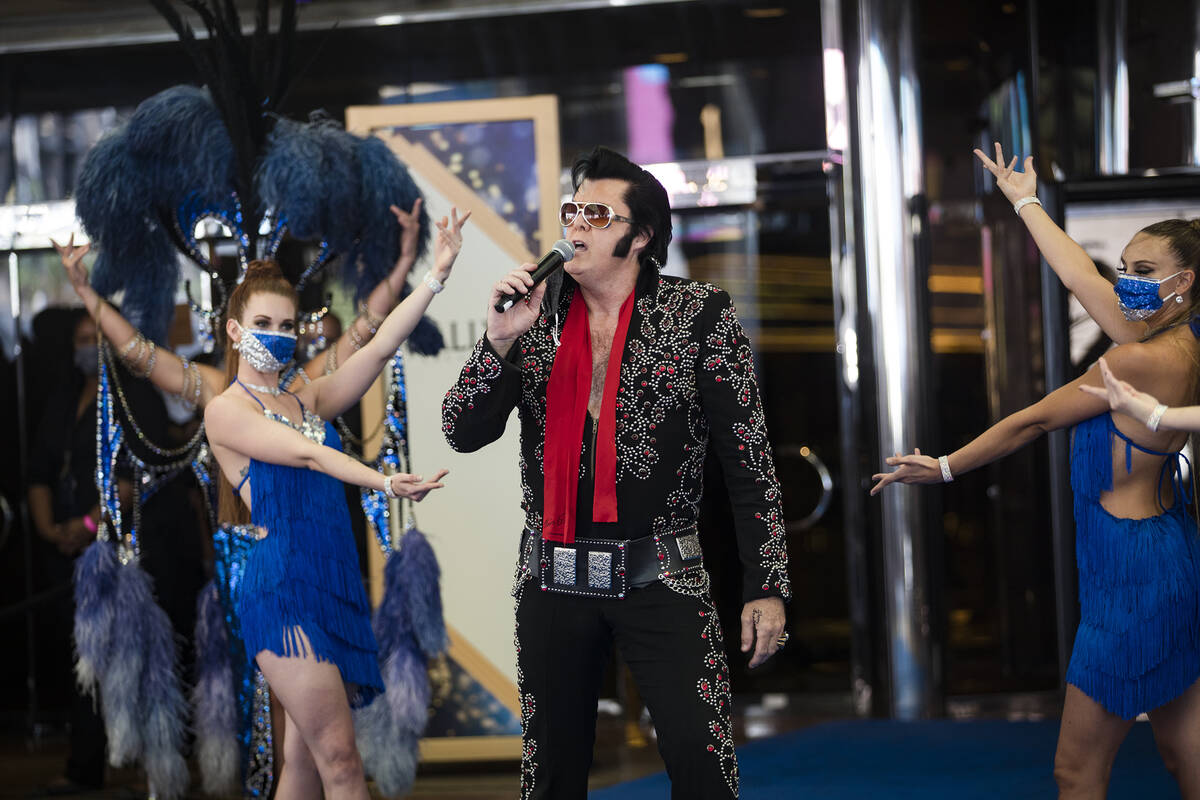 Brendan Paul, impersonating Elvis Presley, addresses the crowd alongside dancers at the reopening of Bally's casino after a months long closure due to the coronavirus pandemic in Las Vegas, Thursday, July 23, 2020. (Rachel Aston/Las Vegas Review-Journal) @rookie__rae 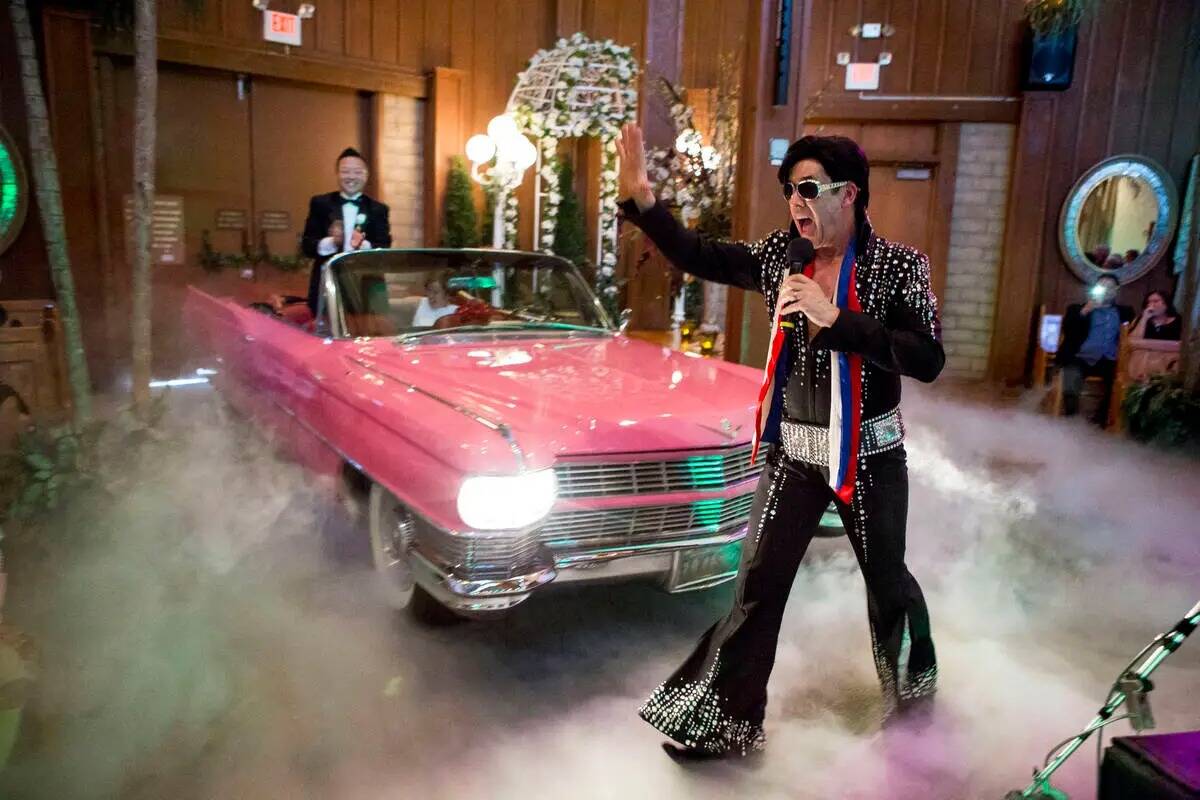 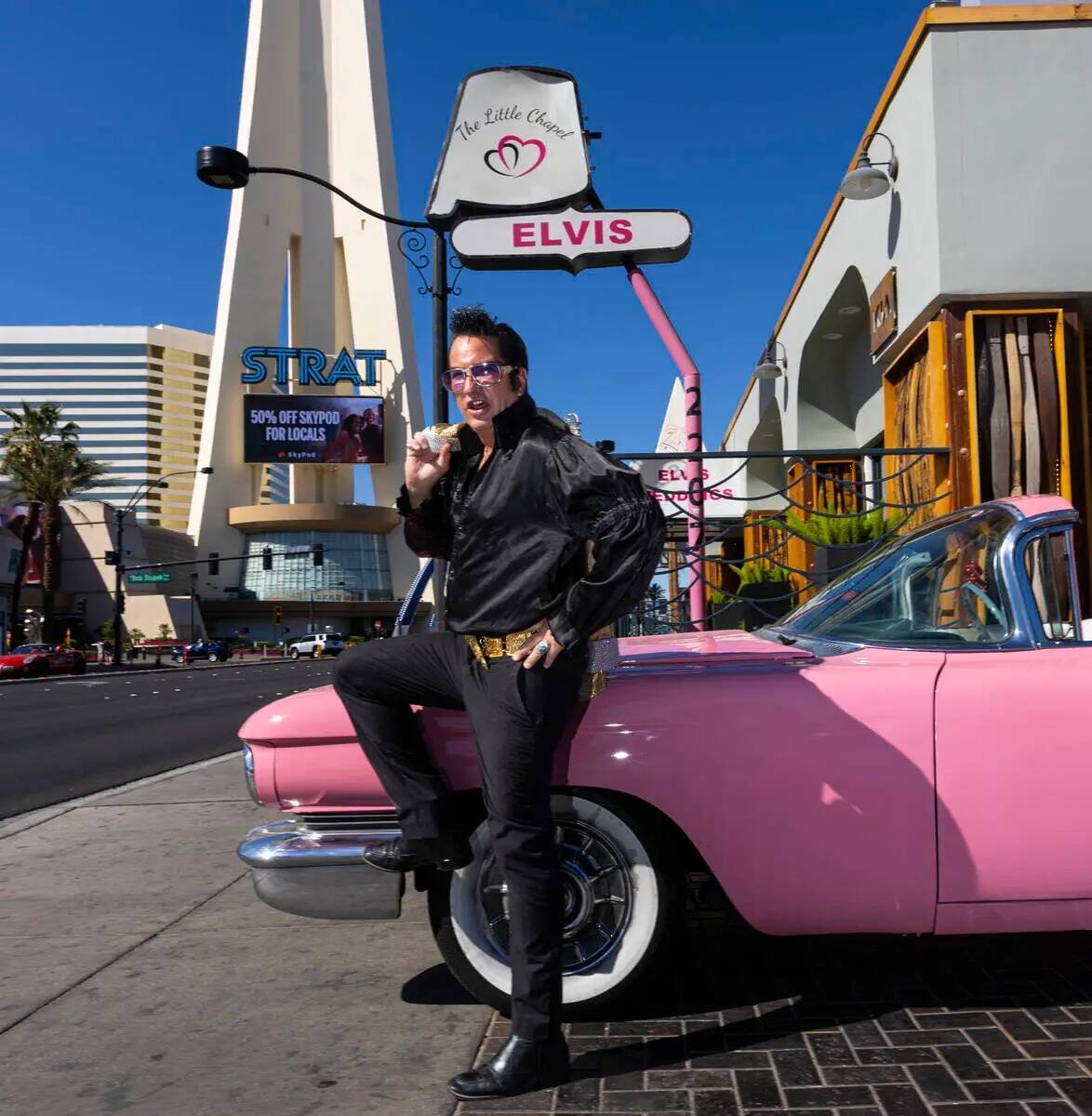 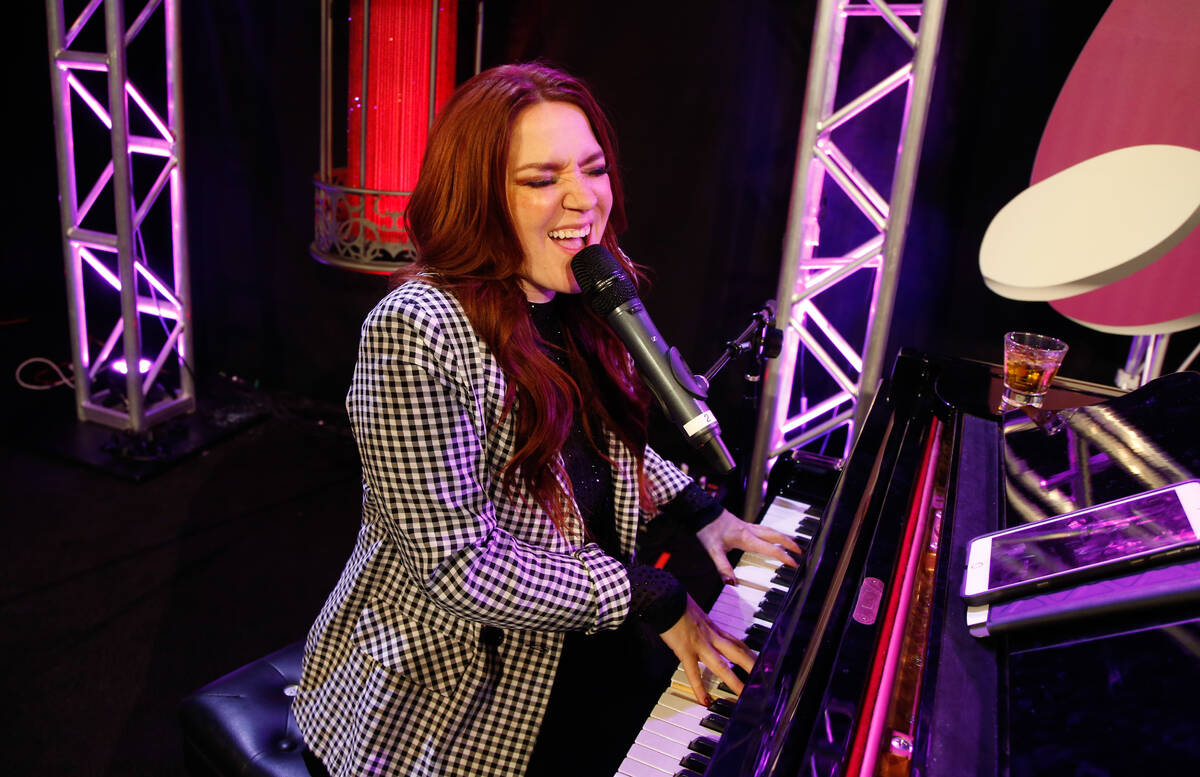 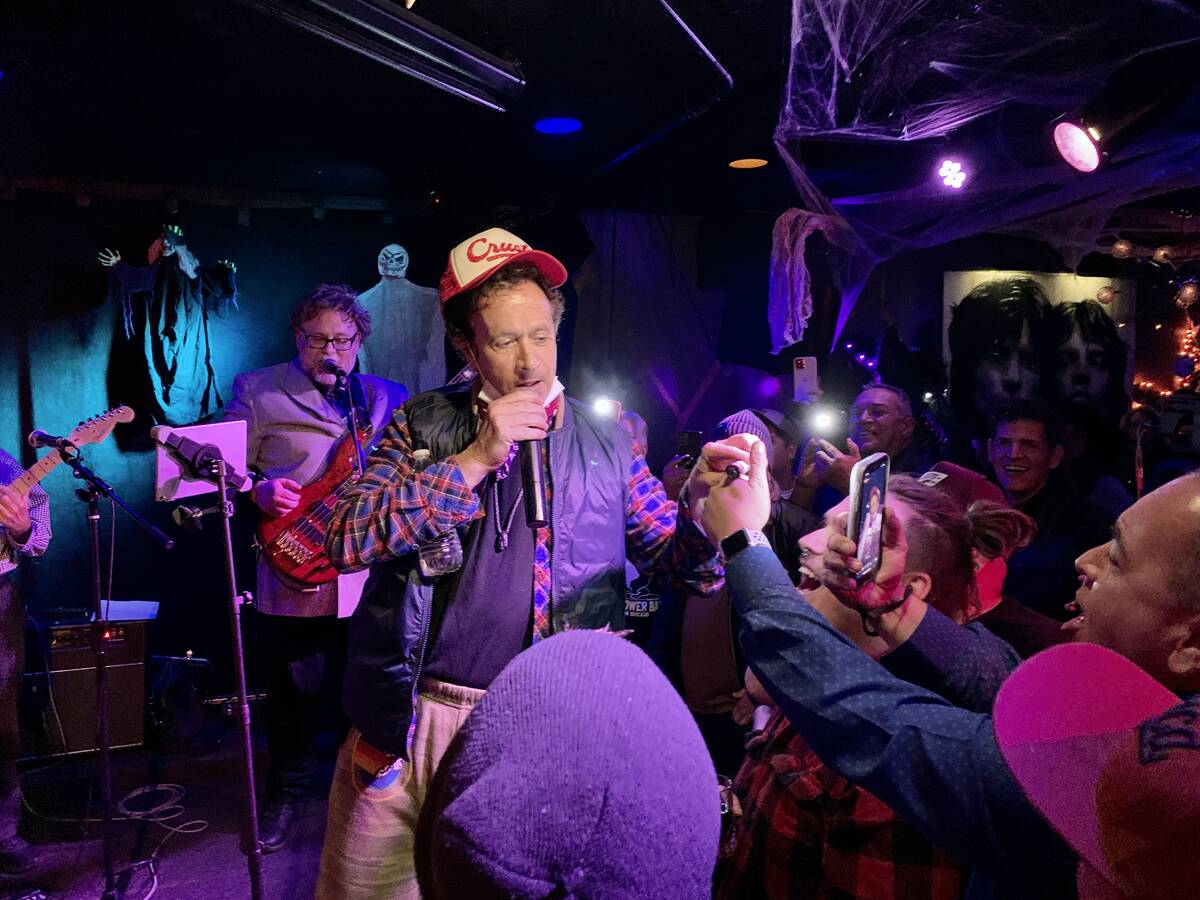 The Kats! Bureau at this writing is William Hill Sportsbook & Lounge at the Palms. The sports are represented primarily by the dueling Celtics and Warriors. The lounge offers dueling pianos. The music starts when the games end.

It’s reiteration time for the Authentic Brands Group and Elvis-themed wedding chapels in Las Vegas: Chapels in Vegas are allowed to perform Elvis-themed ceremonies. Know this, because, similar to images of the King himself, confusion reigns.

We’ve heard varying reports that the chapels are fighting the inaccurate message that Elvis weddings have been banned in Vegas. This is because of headlines in news reports (elsewhere) that say, “Elvis Weddings Banned in Vegas!” or something similar.

Not so. The two sides continue to move toward a widespread licensing agreement. We adhere to reports from operators, ABG and Mayor Carolyn Goodman that the sides will work out deals to officially recognize these businesses.

Chapels are reporting different accounts of how this confusion has affected ceremony bookings. Some say there has been no impact. Others say they have a drop in Elvis business. Most say that those seeking Elvis-themed services are asking specifically if the ceremonies would be allowed before they book.

Vegas Weddings and Viva Las Vegas Weddings Melody Willis-Williams is among those working with ABG. She said in a statement last week:

“We are thankful to our local and international supporters who let the world know how important keeping Elvis weddings alive is to future generations. We feel it is important for our supporters to know ABG has offered a verbal apology. Vegas Weddings and Viva Las Vegas Weddings are currently in negotiations with the legal representatives of ABG over a resolution that will help keep the King a legendary fixture for all Las Vegas Wedding Chapels.”

We did hear back from ABG on Friday, seeking an update. They say nobody is available to be interviewed. This is a company of few words.

Nonetheless, we are staying with the annual $500 figure ABG is offering chapels to be recognized as Elvis-official. And we are optimistic for a long marriage.

Cirque is reminding ticket buyers of its La Grande Experience for “O” at Bellagio. A pre-show meet-and-greet in a VIP room, Champagne, noshes, and luxury boxes are in this deal. Really nice. Not cheap, though, at $440 apiece (not including fees). Have we mentioned the complimentary chocolate-covered strawberries?

“O” is still the company’s Vegas flagship. The show is performing 10 times a week, twice nightly (dark Mondays and Tuesdays). “O” runs more than 90-percent capacity, typically, but turns a profit at about 40 percent. That type of box-office performance is why Cirque moved the show to a twice-nightly, seven-night schedule before COVID.

We were reminded on this visit that the original performance stage for the clown numbers that break up the show were on a fake iceberg. Now it’s a little shanty. And nine former Olympians populate the show, the most of any Cirque production. These are La Grande facts you scoop up, along with chocolate strawberries, on the VIP tour.

Love this scene from @Cirque “O,” as viewed from the “La Grande Experience” at Bellagio … #RJNow #Vegas #Cirque pic.twitter.com/0zpL1weeRf

We have extolled — extolled, I tell you! — Sarah Hester Ross’s comic and music skills. She has just been cast in “Magic Mike Live” at Sahara. Hester Ross says she is “very comfortable around overly attractive people and also very good at photoshop.” Casting her in this production is a great call.

Shania Twain’s return to Zappos Theater this weekend is a good reason to revisit her appearance with Harry Styles at Coachella. Find the YouTube of that duet. Advanced touch-dancing on display.

An item to remind you that Jimmy Kimmel’s Comedy Club is still operating at Linq Promenade — for private events. The consistent word from Caesars Entertainment officials and Kimmel himself has been to return the room to its original concept. That being, a comedy club. But the room makes easy money for private events. It sits on a choice location at Linq Promenade, surrounded between Flamingo and Linq Hotel and a short walk from the Caesars Forum convention fortress.

The Kimmel club has been a favorite among local comics. The room, which opened in April 2019, still holds cross-promotion potential for Kimmel’s late-night talk show and the venue’s headliners. We hope JKCC comes back, if only because that means Kimmel himself might be back for the reopening.

Tony Rock, one of Chris Rock’s younger brothers, headlines the Laugh Factory at the Tropicana from Thursday through June 19. Tony was out in front of the Oscar slap incident from March 27, tweeting within two days he didn’t accept Will Smith’s apology for the incident. A follower asked how he felt about “the Oscars fiasco.” “Foul,” was the response. He also said “Mama Rock” hit harder than han Will or Jada Pinkett Smith.

here are many Rocks siblings. Chris is the oldest of six brothers and a sister.

On April 1, Tony Rock told his audience at PNC Arena in Raleigh, N.C., “If you think you’re gonna walk up on this stage, this ain’t the (expletive) Oscars! If you walk up here, you’re not nominated for (expletive) but these hands!”

Paraphrasing a lot there, but he wasn’t happy. Don’t rush the stage, is the point.

Not yet eligible for the Rock and Roll Hall of Fame but blazing a trail across VegasVille, Pauly Shore and The Crustys are booked at 9 p.m. Wednesday at The Golden Tiki in Chinatown. Expect Shore to cause big commotion in the land of shrunken heads. Go to thegoldentiki.com/reservations for reservations. No cover. Instead, invest in Dole Whips.