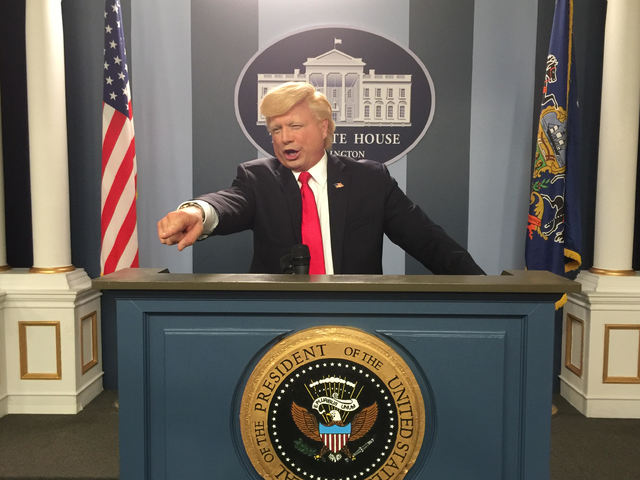 John Di Domenico is shown playing Donald Trump in a sketch on "Conan" over the summer. (Courtesy 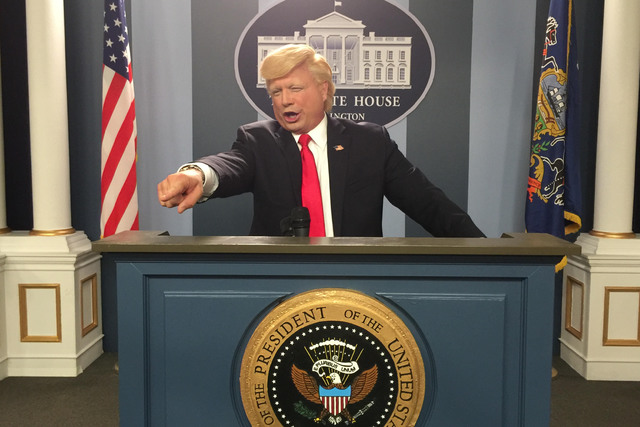 John Di Domenico is shown playing Donald Trump in a sketch on "Conan" over the summer. (Courtesy)

John Di Domenico’s answer is usually, “You know I’m not really him, right?”

Di Domenico is the country’s foremost Donald Trump impressionist, so effective in character that it is indeed difficult to discern the actor from the portrayal. When I met him over the summer I said, “I love your work. Not really.” Di Domenico laughed and repeated his answer.

“It has been amazing. Crazy,” says Di Domenico, who moved to Las Vegas from New York five years ago simply because, “I was tired of paying $4,000 a month in rent for nothing.” He has worked as a corporate entertainer for 25 years, having majored in speech at Temple University in his hometown of Philadelphia.

Di Domenico first mastered a portrayal of Austin Powers, back when that film franchise debuted. As Powers, he was hired to perform at the 55th birthday of a famous billionaire – Trump – at Trump Marina in Atlantic City. “We swapped lines onstage and he was really engaged,” Di Domenico says. “He was into it, I’ll say that.”

Di Domenico didn’t develop a full Trump treatment until years later, when he was hired to do play Trump in a Visa commercial in 2006. To prep, he watched the entire first season of “Celebrity Apprentice” on DVD, a 30-hour assignment (or, if you will, sentence).

In a twist, Di Domenico will not even be in the United States on Election Day. Long ago he booked a TV gig in Montreal. He realizes his career would gain ever more velocity should Trump win, saying, “To portray a president is like being minted. I have a friend, Reggie Brown, who has been doing President Obama since 2008, and he’s literally been all over the world over the past eight years.”

But Di Domenico is not formally endorsing Trump, nor is he backing Clinton. “I get heat from both sides – Clinton people think I am a shill, and the Trump people have been furious that I’ve been making fun of him,” he says. “I have to stay in the middle. Until I walk into the voting booth, Donald Trump is not a candidate. He’s my work.”

Dana Carvey and Jon Lovitz, who announced their “Reunited” co-headlining run at the Foundry at SLS Las Vegas this week, appeared together in one of the more famous debate sketches ever on “Saturday Night Live” during the 1988 campaign. Carey portrayed George H.W. Bush — a role he wound up perfecting during the Bush administration — and Lovitz played Michael Dukakis.

“I was not good at Bush yet, but I did have the line, ‘Not gonna do it, wouldn’t be prudent,’ and that carried me,” Carvey said in a phone interview last week. Lovitz added, “I was picked to play Dukakis because I looked like him. I didn’t do an impression until they picked me for that reason.” He said the line, “I can’t believe I’m losing to this guy,” which was recited almost in Lovitz’s own voice, which “was what a lot of his supporters were feeling at the time, so it worked.”