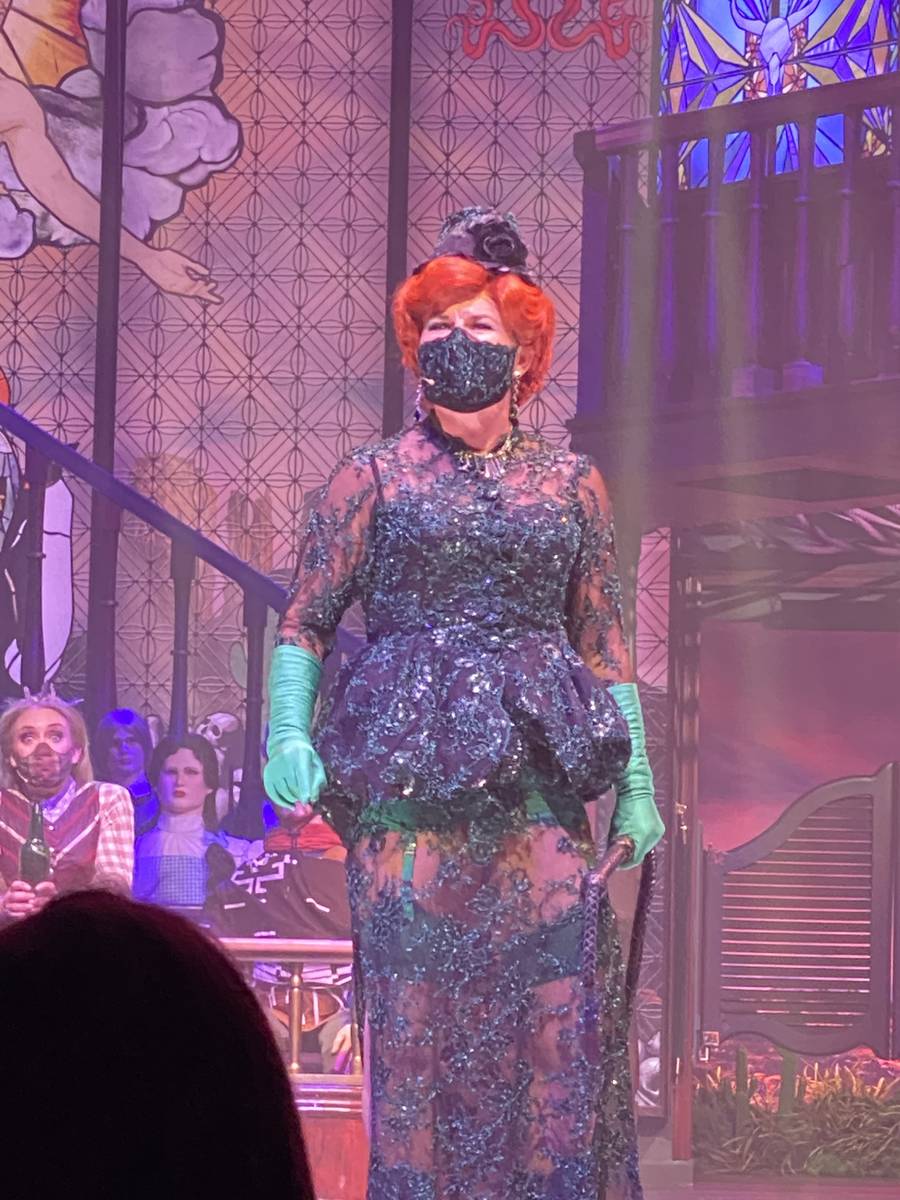 Petra Massey as Boozy Skunkton is shown at the return of "Atomic Saloon Show" at The Venetian on Wednesday, May 5, 2021. (John Katsilometes/Las Vegas Review-Journal) @JohnnyKats 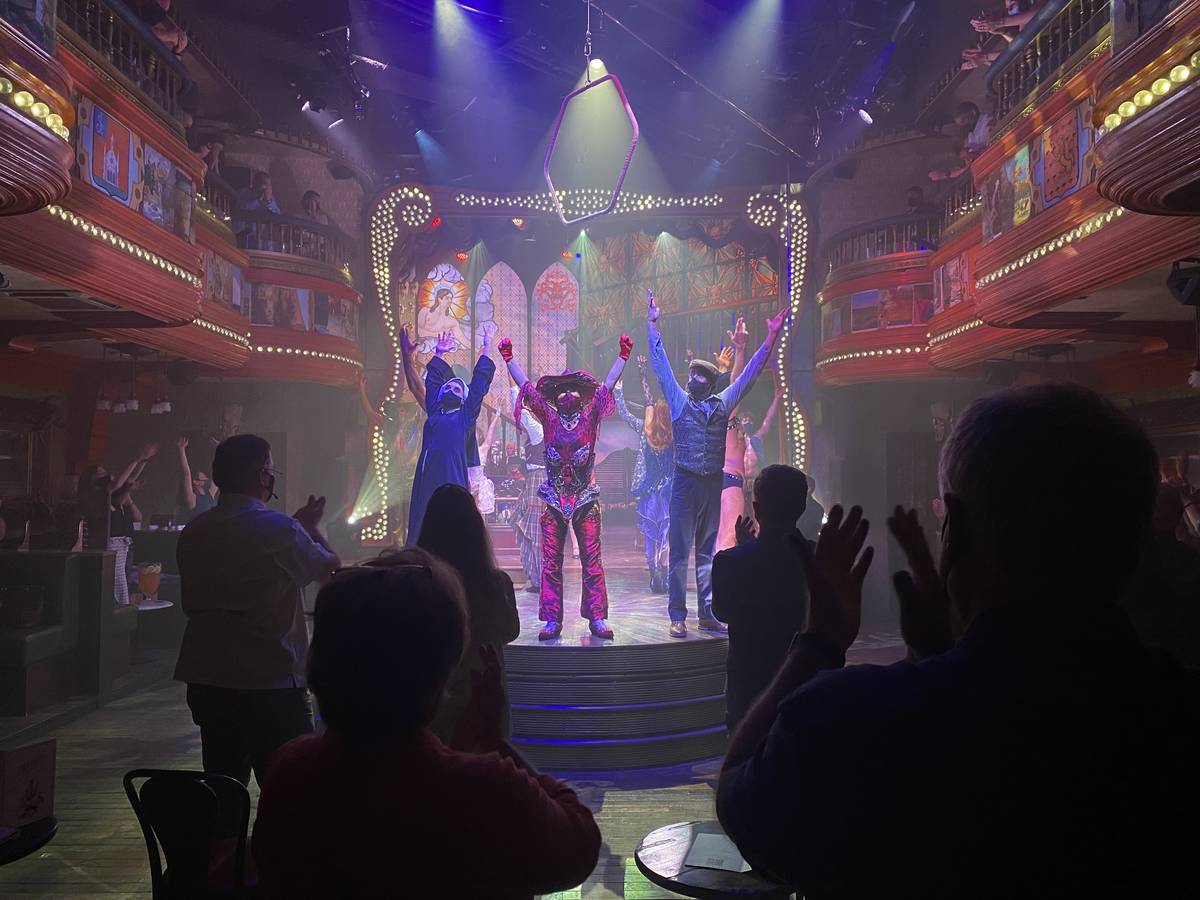 The cast of "Atomic Saloon Show" bows it out on its return to the stage at The Venetian on Wednesday, May 5, 2021. (John Katsilometes/Las Vegas Review-Journal) @JohnnyKats 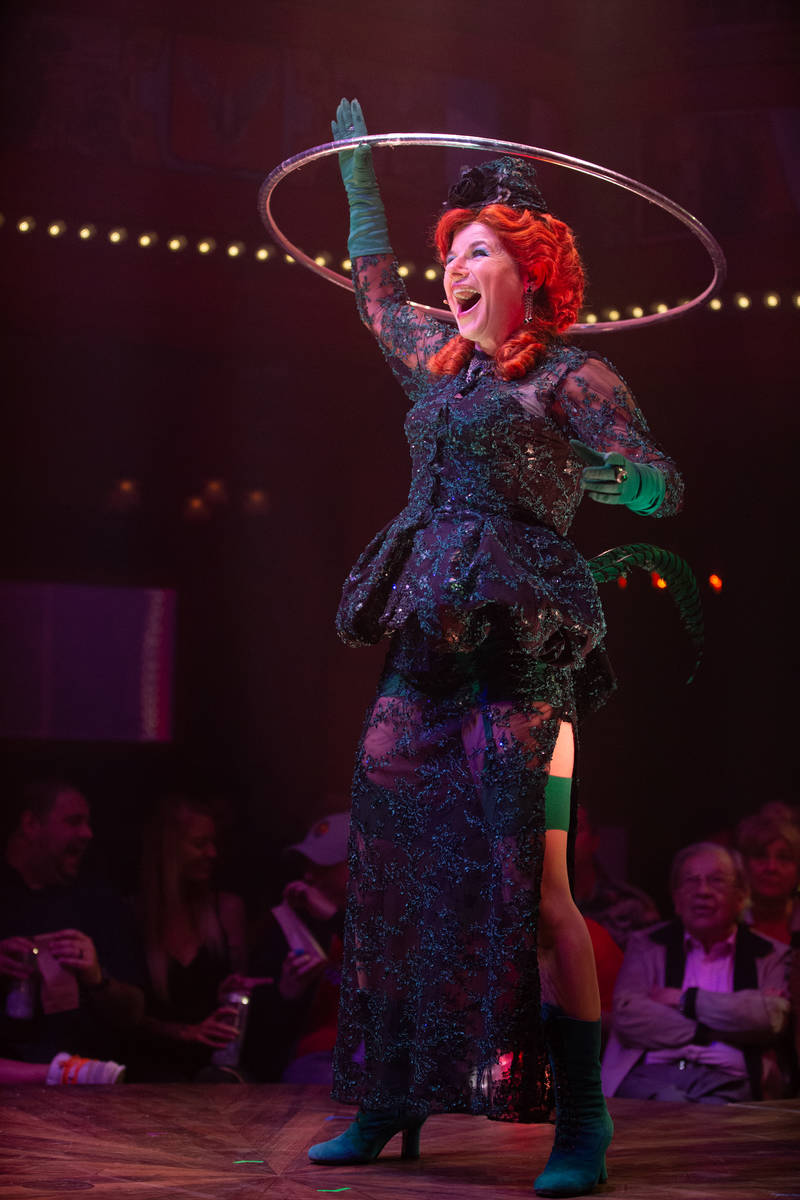 Petra Massey as Boozy Skunkton, a role she took over as "Atomic Saloon Show" opened at The Venetian in August 2019. (Erik Kabik/Spiegelworld) 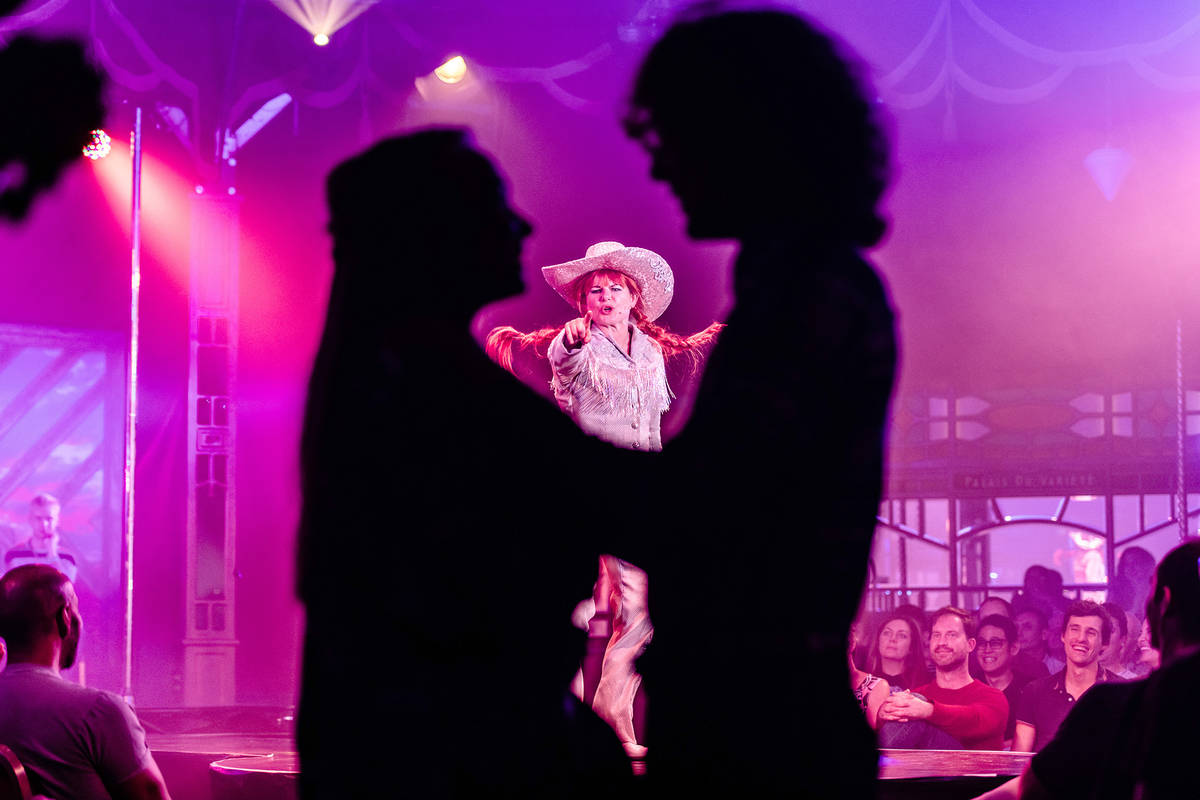 Madame Boozy Skunkton (Petra Massey) takes umbrage at a budding romance in a performance of "Atomic Saloon Show" during its debut at Edinburgh Festival Fringe on Aug. 4, 2019. (Mihaela Bodlovic) 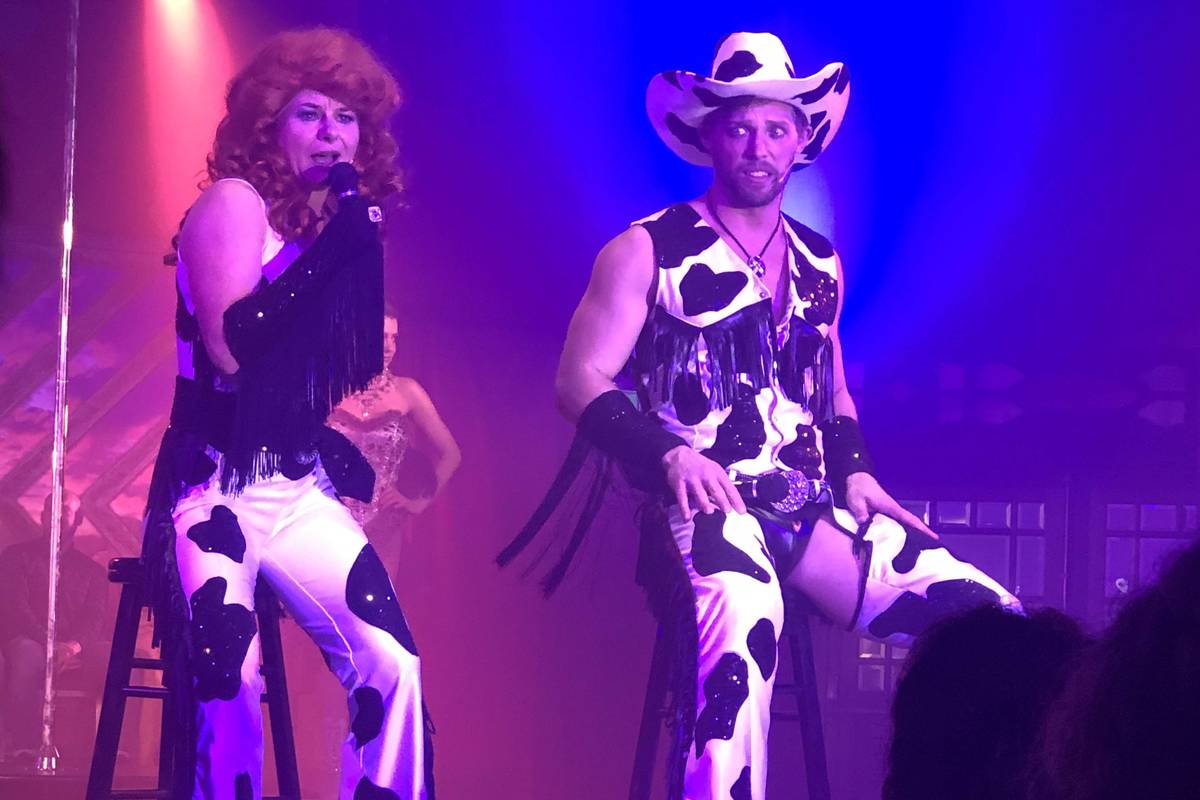 Petra Massey can’t seem to shake the incidental reference to a film classic.

“We’re really ready to jump back in the saddle,” she says one moment. Later, it’s “We do feel like we’re mavericks, pioneers who are blazing the trial.”

There it is. Saddles. Blazing. “Blazing Saddles,” the Mel Brooks film classic that “Atomic Saloon Show” was favorably compared to in the days before COVID. The Wild West farce is finally back for its long-awaited relaunch at The Venetian’s Grand Canal Shoppes.

The comically brilliant Massey returns as brothel proprietor, setting herself ablaze in one of the show’s inspired moments. She was nearly bouncing off the walls, or at least down the Atomic Saloon stairs, when the show returned for a friends-and-family performance Sunday. That buoyancy continued through Wednesday’s relaunch.

“I’m still buzzing,” Massey said in a phone chat this week. “I do not know what it’s like to have an adrenaline rush like that. I’m still feeling it. I couldn’t get to sleep. I have not slept.”

Massey, originally from England, said she’d felt homesick throughout COVID. But she experienced a different sort of kinship when she was onstage in that return rehearsal.

“It’s honestly a cliche, but it did feel like being home, being on that stage,” she said. “I was back in the saloon, being with my mates. We’d been ripped apart from each other, and it is a rush to be back with them.”

“I felt so much like everyone has gone though this bizarre time, and now there is some positive in this world that has been negative, and downright awful for everybody,” Massey said. “Then it was like this 100-meter sprint through the whole show.”

Spiegelworld founder Ross Mollison, an able talent scout and recruiter, found Massey to serve as a multifaceted performer in his Vegas-based family.

“Her strength and awesome talent as a performer, a friend, a mother, a clown, a team member and leader — and her love of community — has been an inspiration to all of us, and to me especially, over the last 14 months,” said Mollison, who attended Wednesday’s relaunch. “Tears of happiness were shed last night as Boozy reopened the Saloon doors. May they never close.”

The show played to an adoring full house on Wednesday night, drawing a deserved standing ovation.

Massey kept occupied as a co-star in Spiegelworld’s “VEGASHITSHOW” YouTube series. The project has effectively chronicled the lives of the company’s sidelined performers, including those from “Absinthe” (which has returned to Caesars Palace) and “Opium” (which will be part of a new restaurant concept at The Cosmopolitan of Las Vegas when it is back, likely by the fall).

Also, Massey volunteered to teach and serve as an outreach coordinator at Mojave Springs School. That’s where Richard, the 8-year-old son of Petra and her husband, Roger, is a student. Several Spiegelworld and Las Vegas entertainers have children enrolled at Mojave, which Massey refers to as “clown school.”

Massey has been in Vegas far longer than the run of “Atomic,” which opened in August 2019. In her Spy Monkey production team, she was a member of the early version of “Zumanity” at New York-New York. She and Cal McCrystal, director of “Atomic Saloon Show,” collaborated on “Zumanity” in the days when Cirque was still blossoming on the Strip.

Though the Spy Monkey brand of comedy was not a neat fit for Cirque, Massey said she was crushed when “Zumanity” was closed permanently in November, among the city’s several COVID casualties.

“I was devastated, absolutely devastated, to hear that,” Massey said, quoting Mollison about Cirque’s resiliency. “Ross hit the nail on the head when he said Cirque is made up of very adaptable people. It can be a precarious, insecure lifestyle when that is taken away from you, but we see that they will survive.”

“Cal and I have a second-nature language,” Massey said. “I call him my Jokey Dad. Whenever he jumps in and takes notes, I hang on his advice. The little moments, the detailed looks, he can go from a giggle to a belly laugh, from a giggle to full laughter, so well. It’s a brilliantly crafted show. Now that we are back it’s like, ‘God, yeah. We made it.’”