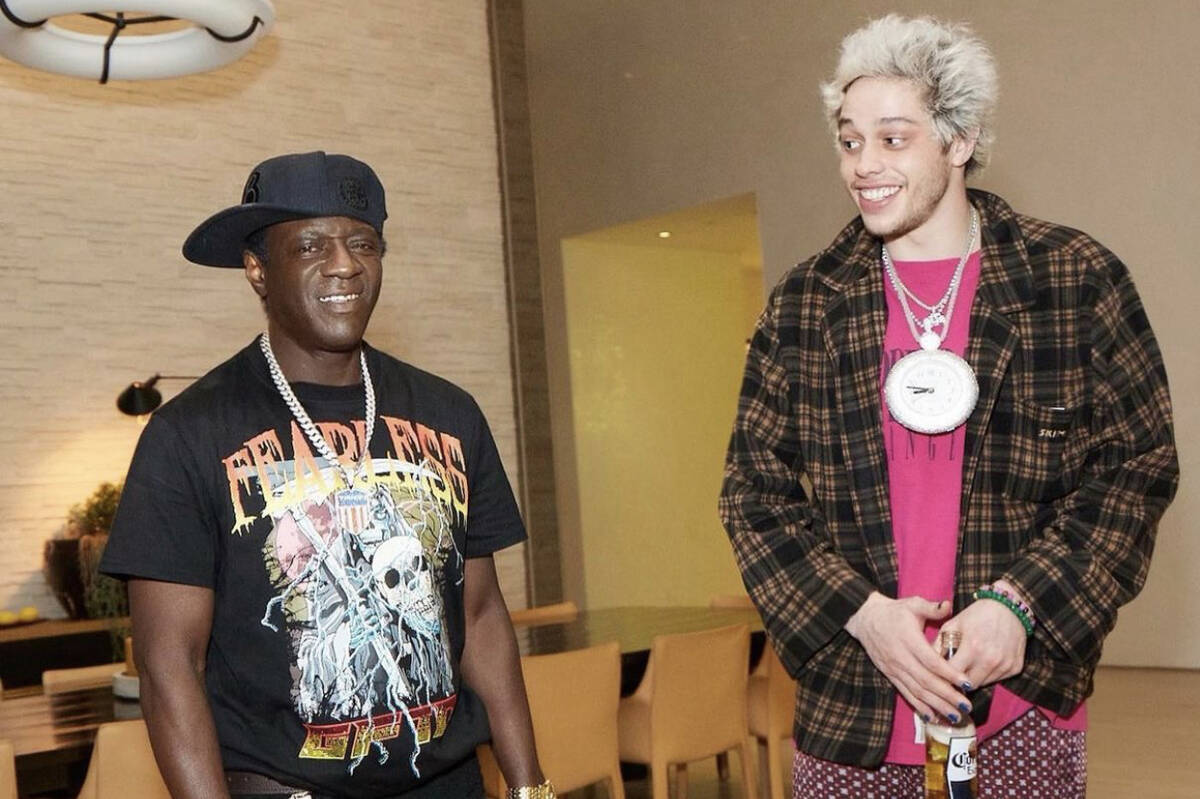 If there is ever a Social Media Hall of Fame, and by gosh there should be, Flavor Flav’s posts of Pete Davidson’s birthday party should hang at the entrance.

We have Flav, Davidson, and Kim Kardashian West and Kris Jenner, all in a group pose. Kardashian is flashing a peace sign, Davidson the middle-finger salute, while Jenner sports a pair of oversized white shades. All are in matching brown-plaid outfits. And Flav? He’s is shown in a rare moment, without his trademark timepiece necklace.

He gave that to Davidson, the “SNL” cast member who turned 28 on Tuesday. The second shot in the series shows a beaming Davidson wearing the clock, which reads 8:48 p.m. (or a.m., depending on the mood).

The gifting of a timepiece is a first for the man born William Jonathan Drayton Jr.

“I never gave a clock to no one ever in my life!” Flav said in a phone chat and occasional rap spree Thursday afternoon. “But Pete is crazy for Flavor Flav, just crazy. So I thought, ‘Why not give him the clock?’ And yes, it was the first ever.”

Asked how many clock necklaces he has amassed, Flav said, “Man, I have NO idea. I can’t even count them now. I’ve got a bunch.”

The Davidson party was held at Jenner’s home in Palm Springs, with Flav sharing his posts Wednesday.

Flav’s excitement about the event far outpaced his willingness to furnish specifics.

Flav then turned familial. “I’m proud to say that I am Pete’s adopted father, just to let y’all know!” he announced. “Pete is my adopted son!”

The Rock and Roll Hall of Famer, from his days with Public Enemy, added, “Kim and Pete are my peeps, and when they are ready for the world to know what’s up, the world will know.” The couple has been rumored to be romantically involved since appearing together at Knotts Scary Farm in Buena Park, Calif., with Kourtney Kardashian and her fiancé, Travis Barker, about two weeks ago.

In Flav entertainment-empire news, the rapper said he is working on new singles for an upcoming solo album. He talks of a residency in Vegas (he loves the Plaza, especially). The pop-culture icon is also planning a documentary of his life, which certainly will include the time when a nefarious stranger first slipped a clock around his neck some 30 years ago to create a look for all time.

“Your boy, Flavor Flav, has signed a deal with Mark Wahlberg’s company for a documentary!” Flav said. Asked for the timeline of this project from Mark Wahlberg’s Closest To The Hole (golf reference) production outfit, Flav said, “There is no timeline. When there is a timeline, you will know.”

The city’s pre-eminent yacht rock band, The Windjammers, are playing Rocks Lounge at Red Rock Resort at 7 p.m. (doors), and 9 p.m. (show) Saturday. We have the rebuilt band with Jerry Lopez on guitars and vocals, Larry Esparza on guitar, Dan Grennes on bass, Jon Celentano on sax and vocals, Steven Grantham on drums and Jamie Hosmer on keys. Lopez says, get there early. Kats says, ride, ride like the wind, to be free again …