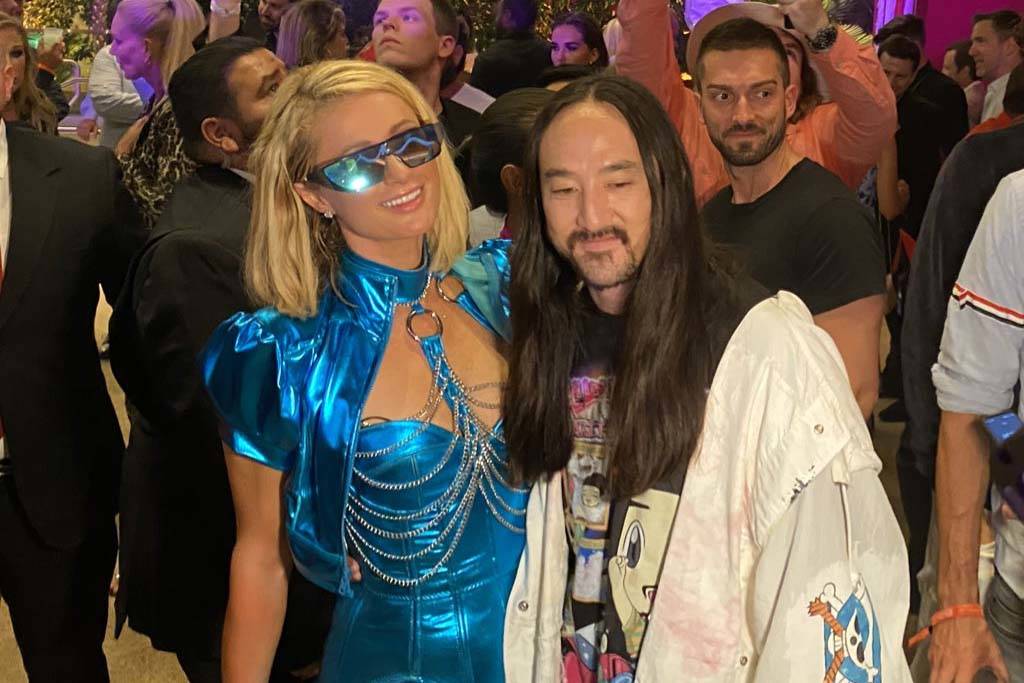 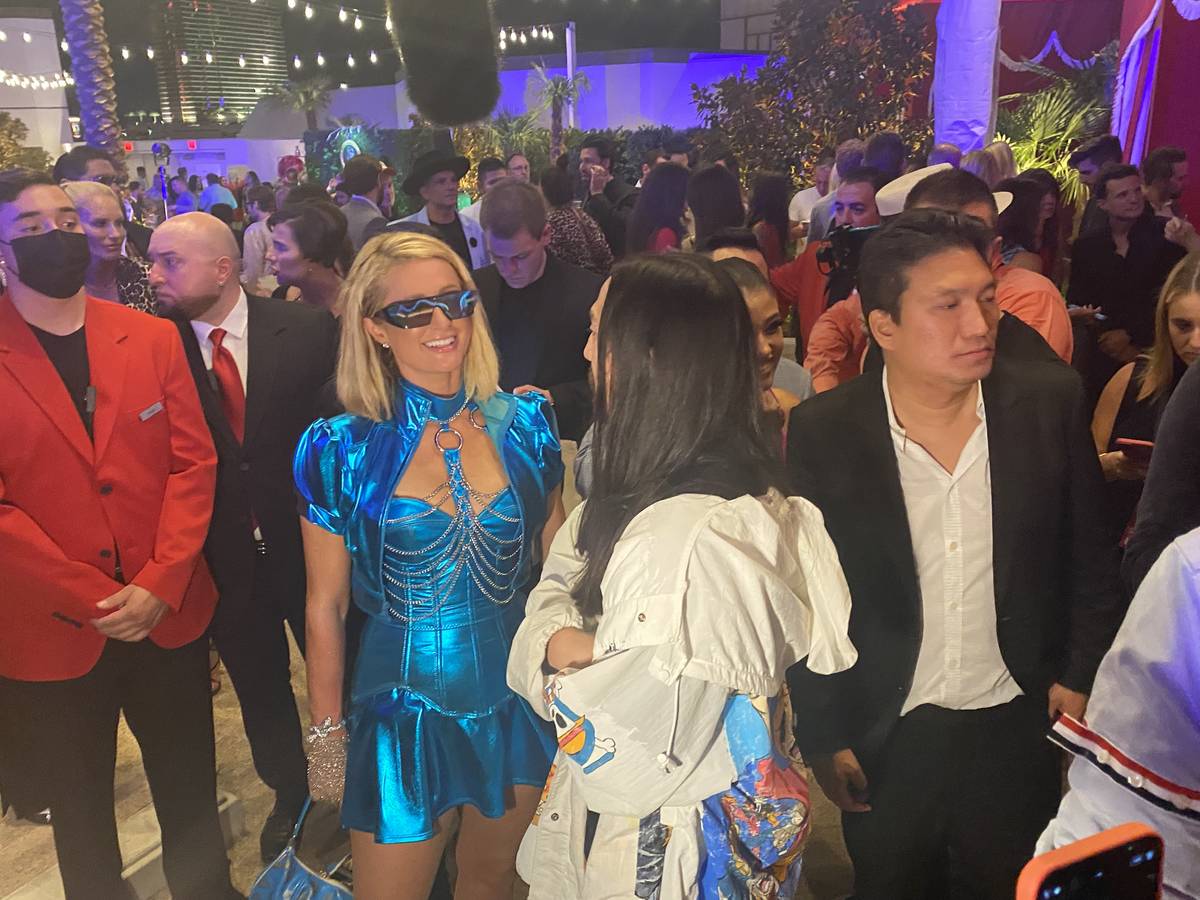 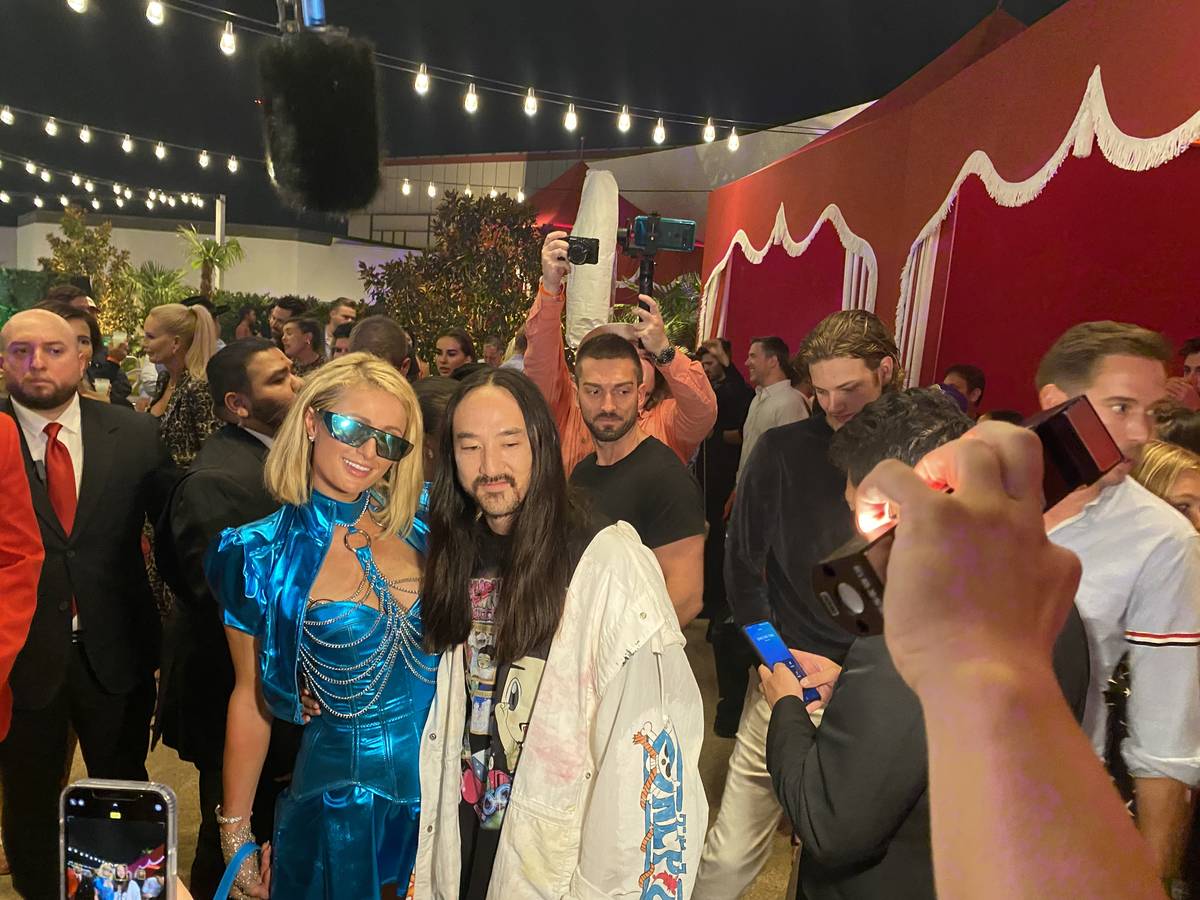 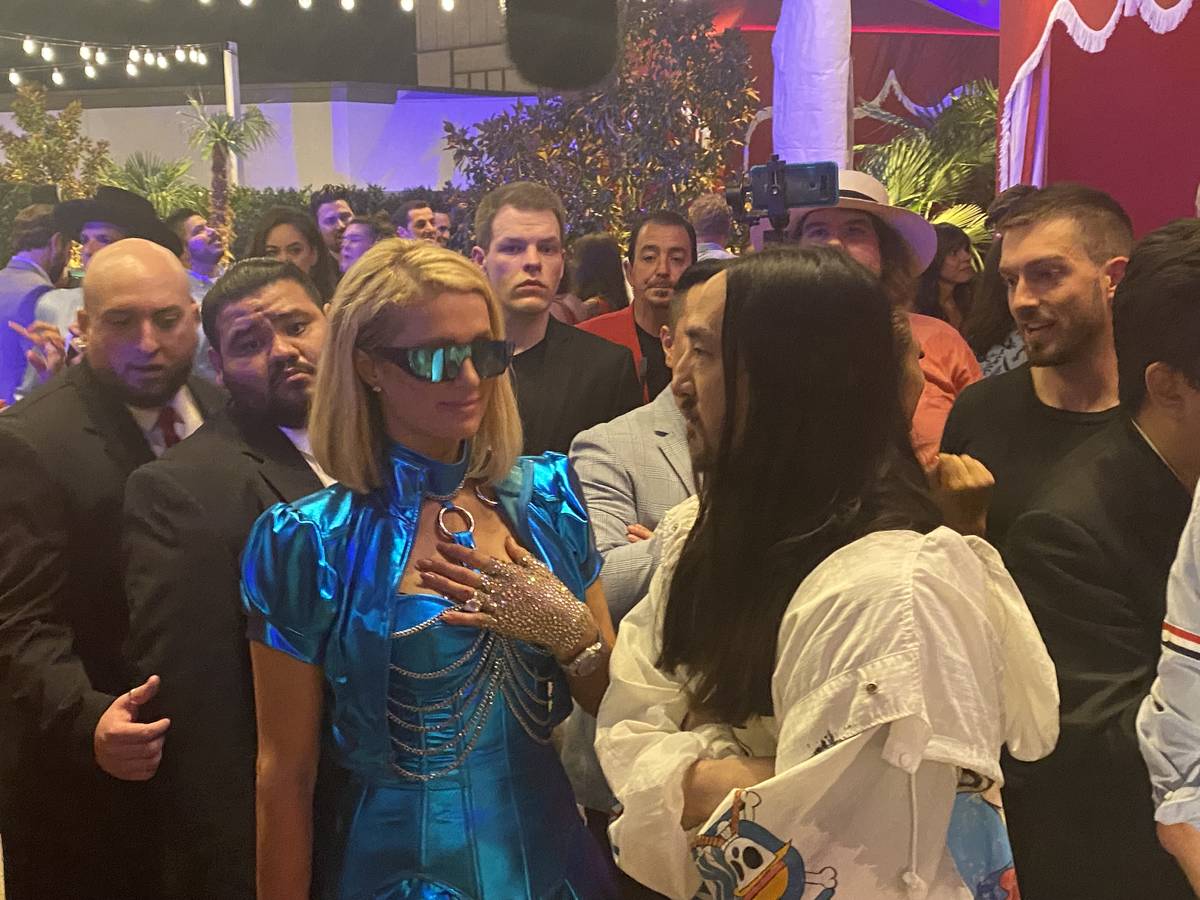 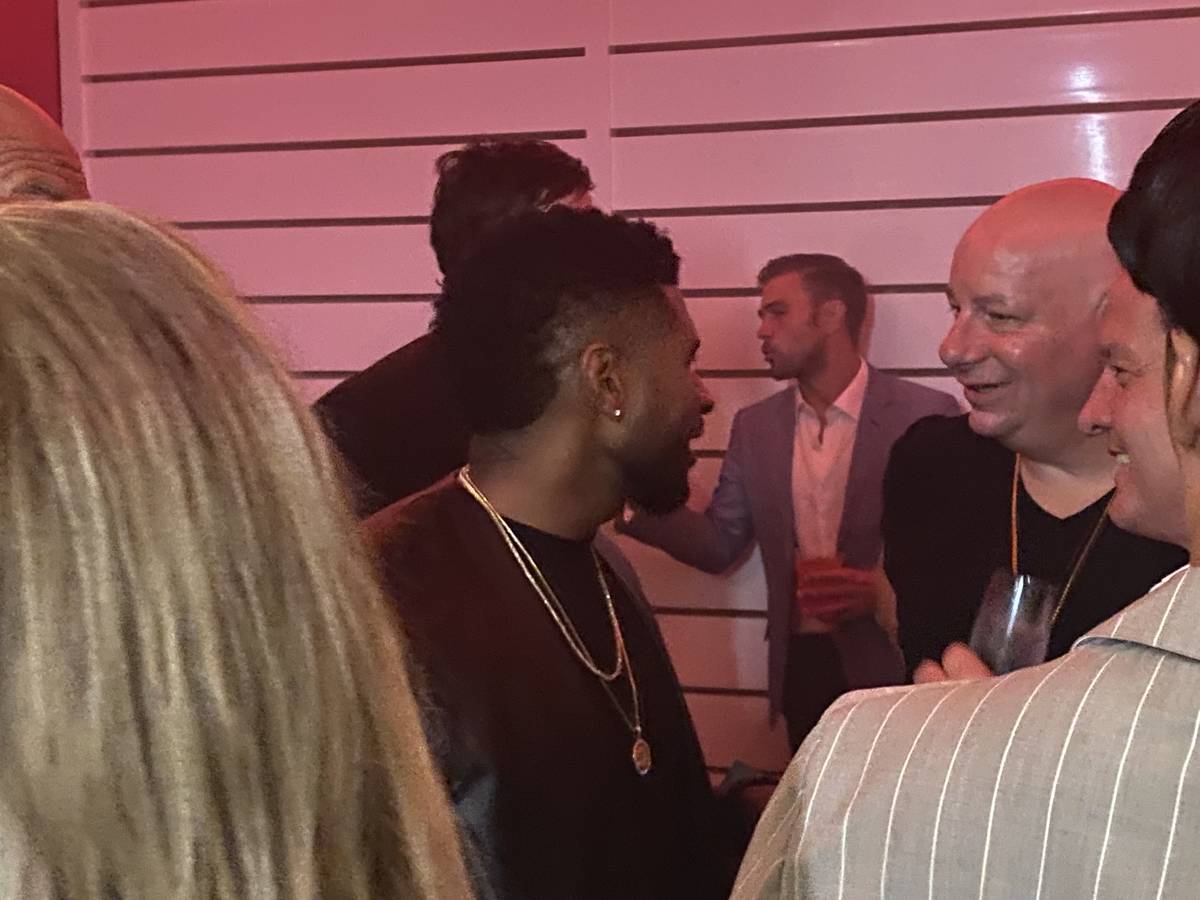 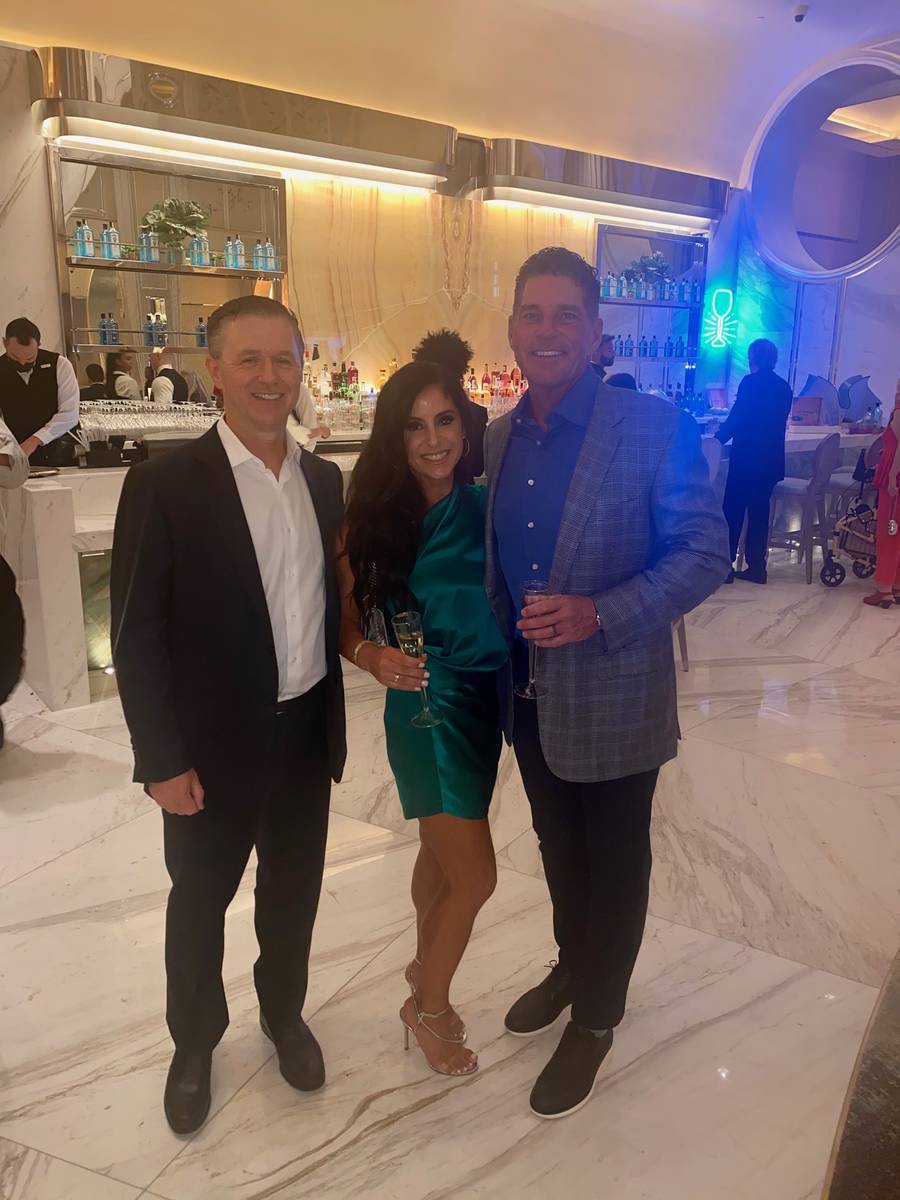 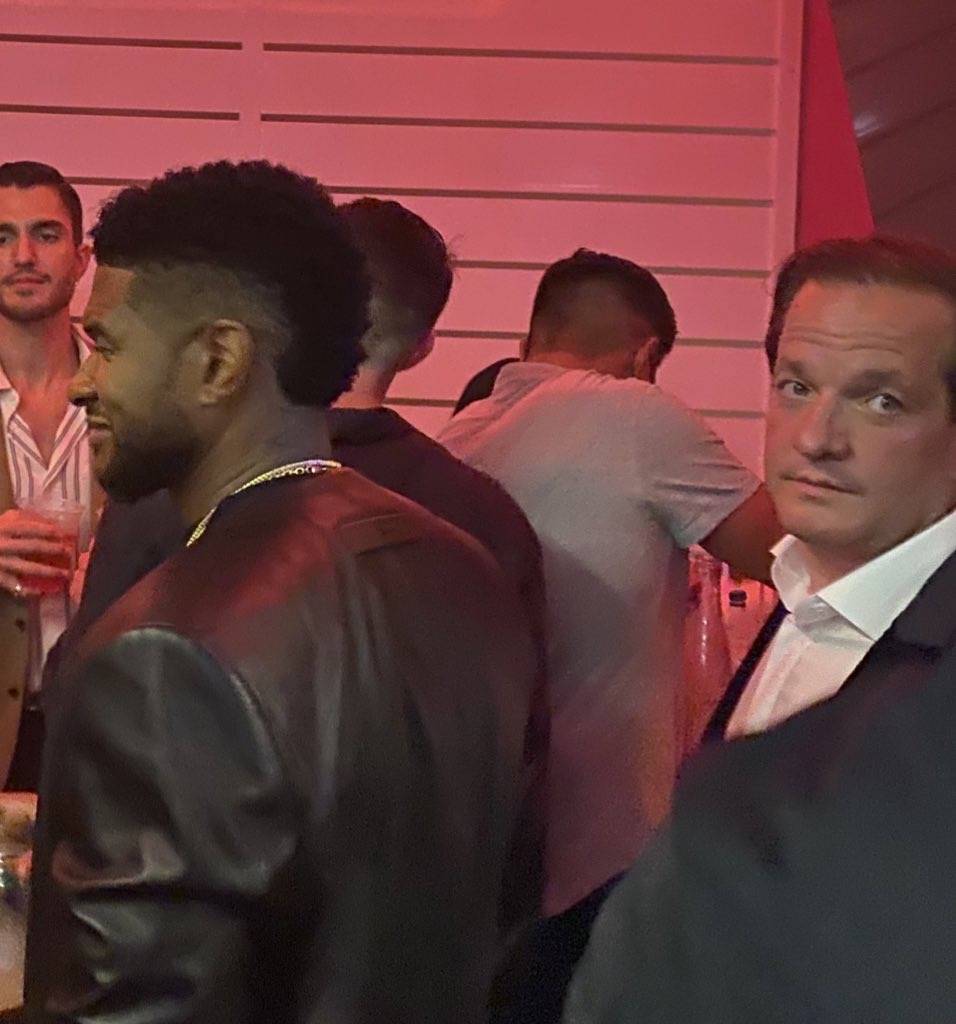 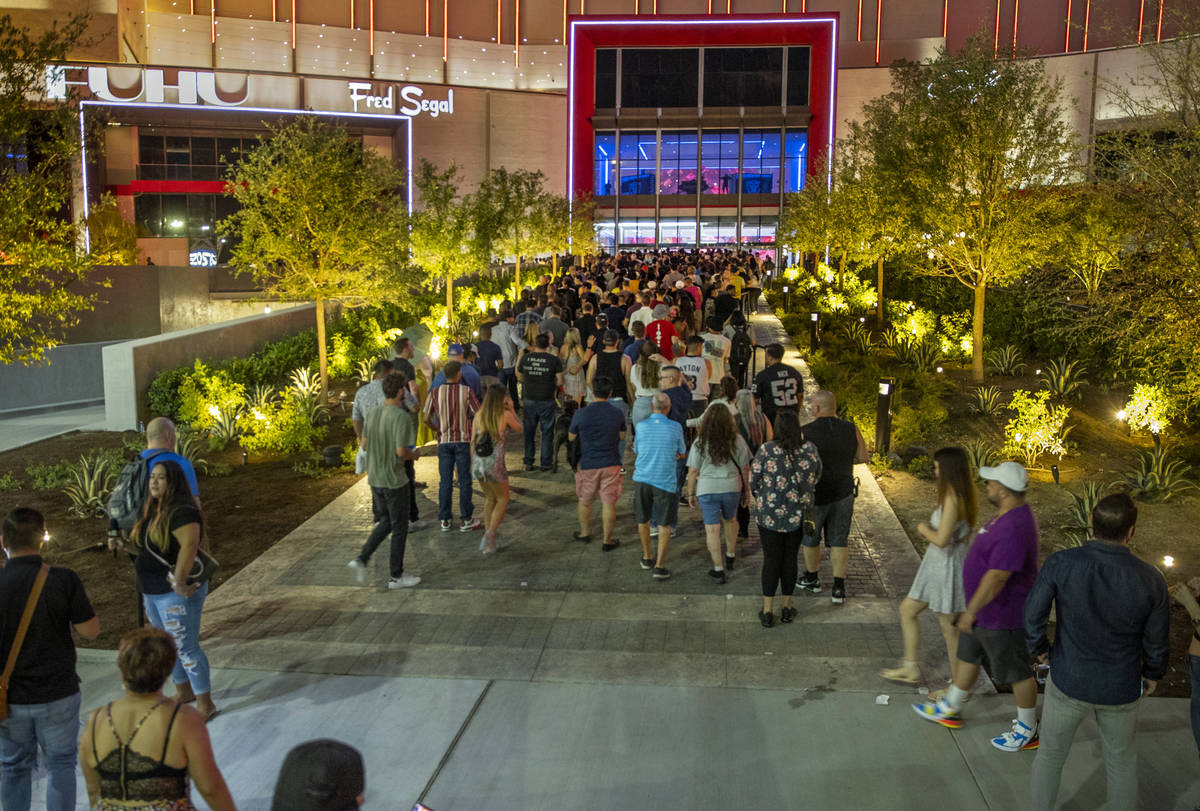 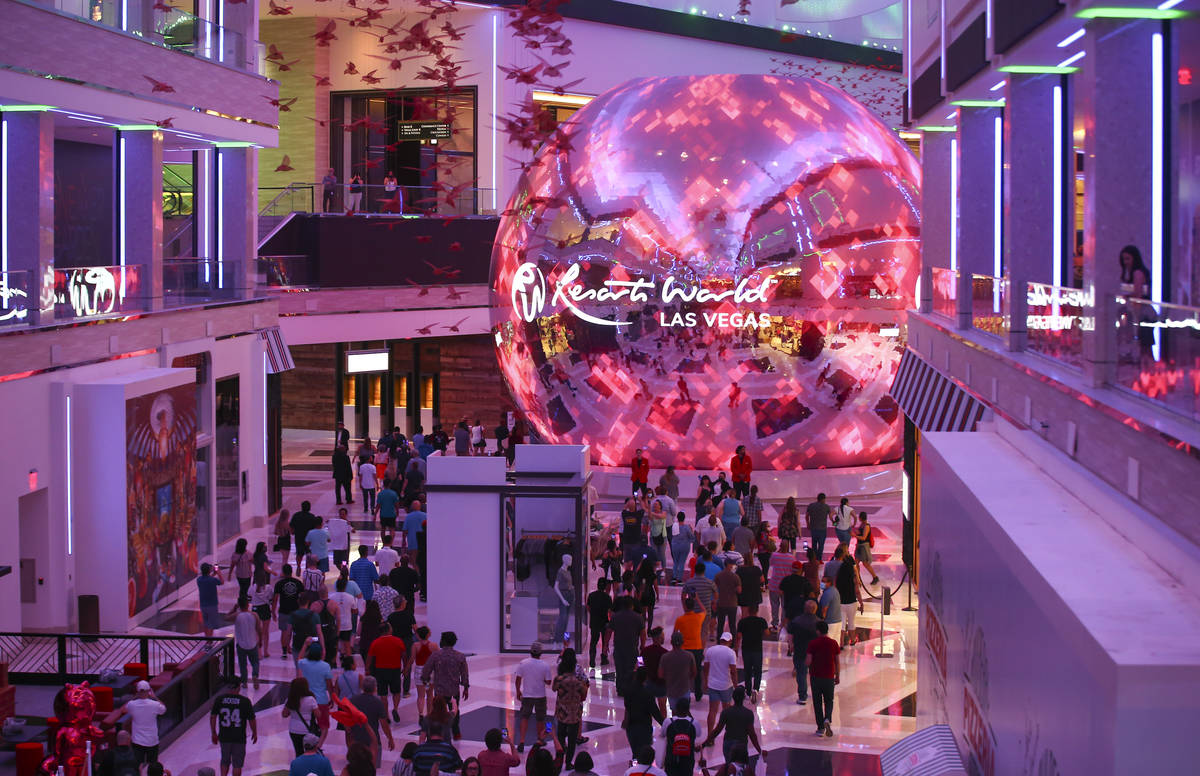 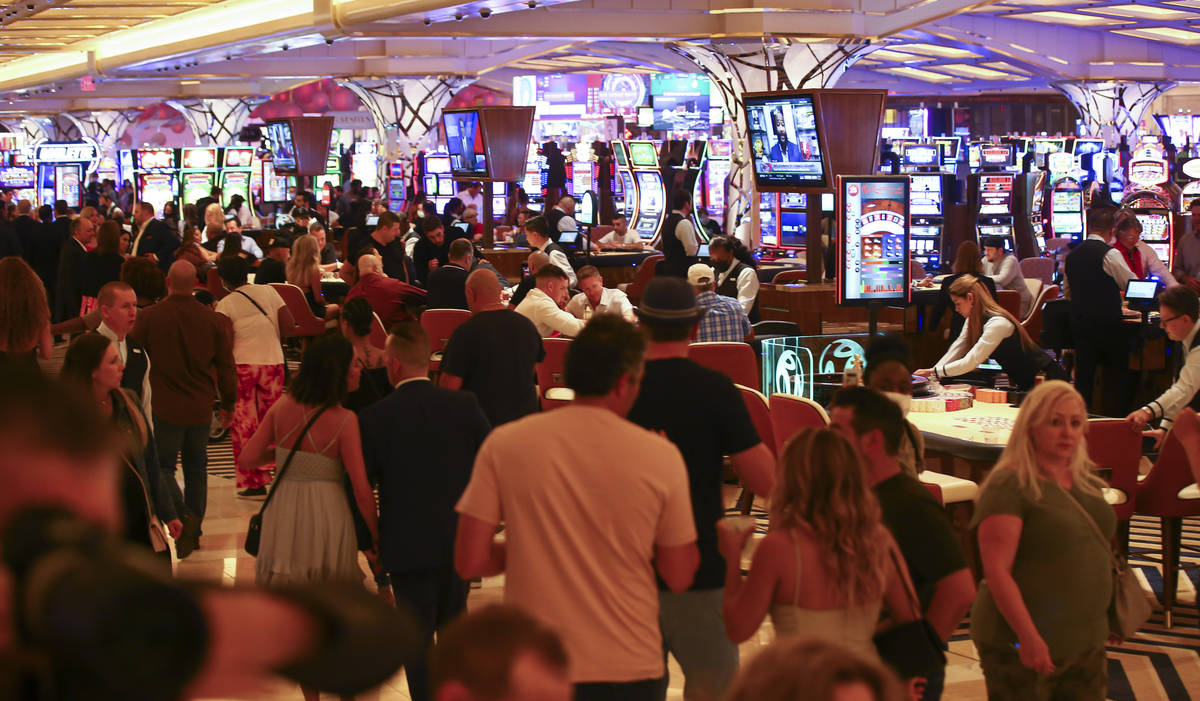 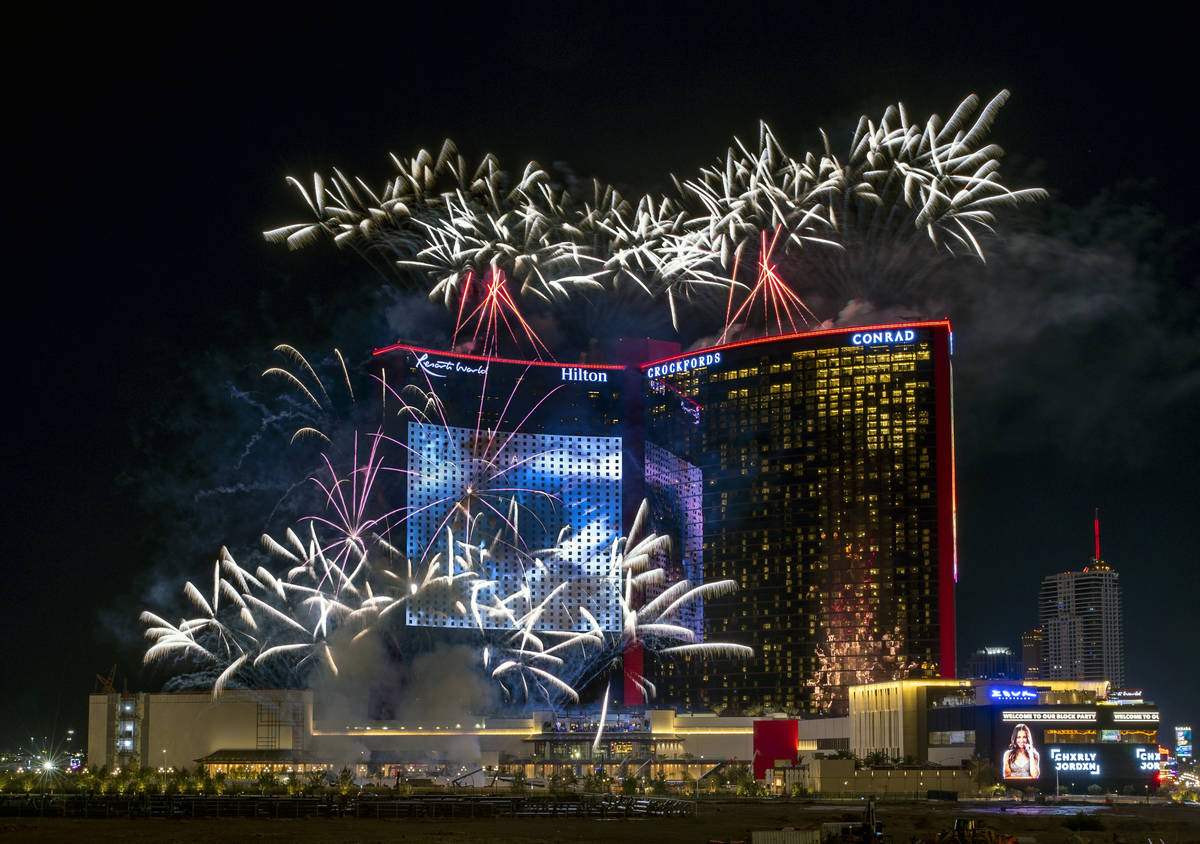 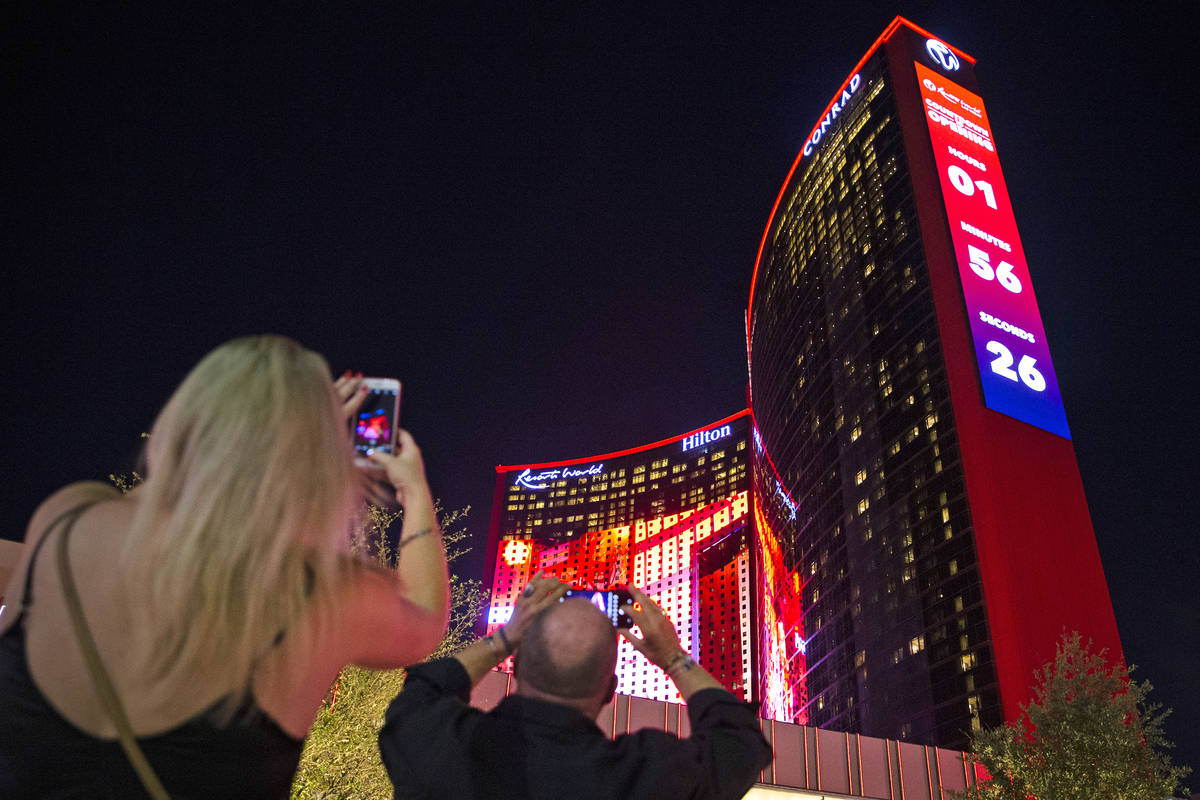 Beth Burdick, left, and Mark Gierth, both of Las Vegas, photograph Resorts World Las Vegas on Thursday, June 24, 2021, in Las Vegas. The couple waited to enter the resort at its 11 p.m. opening to the public. "I'm excited to see what you actually get for $4.5 billion dollars," said Gierth. (Ellen Schmidt/Las Vegas Review-Journal) @ellenschmidttt 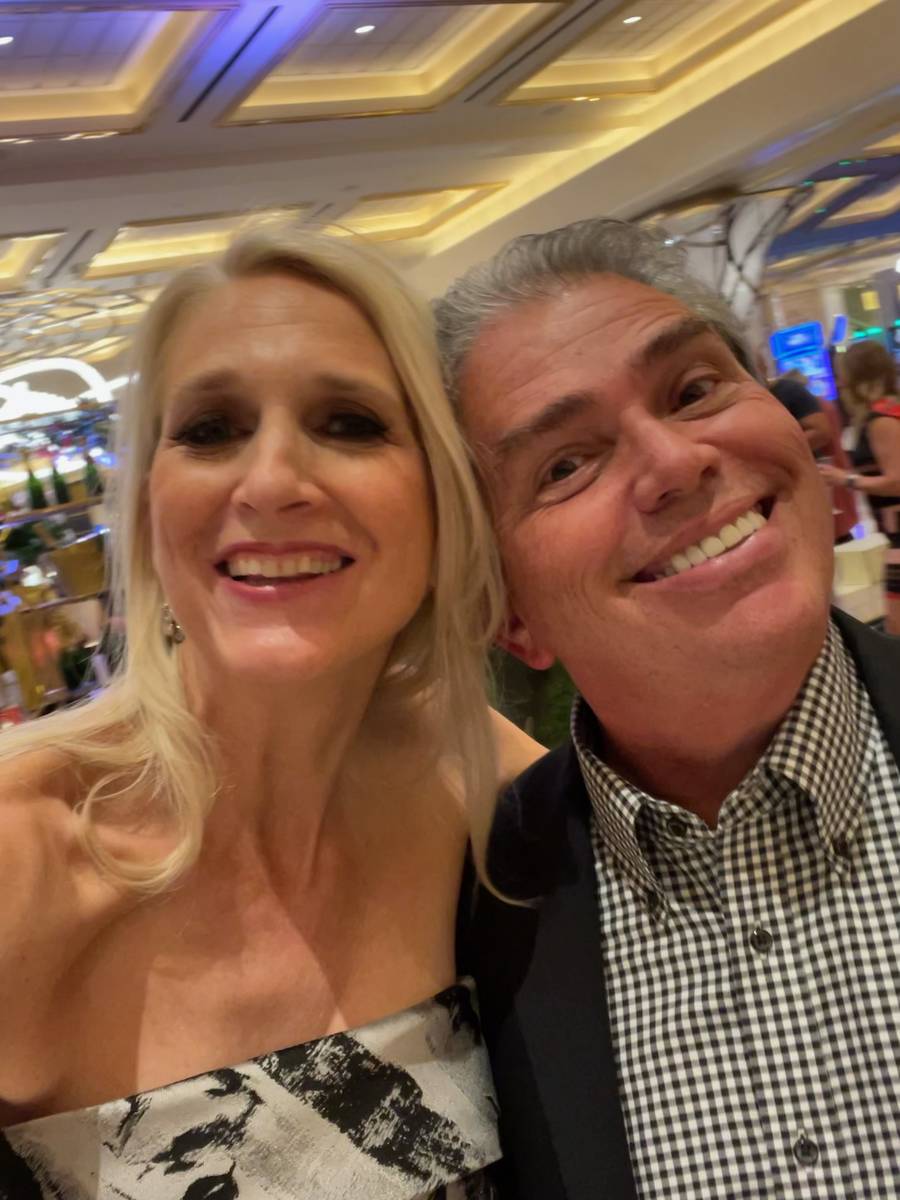 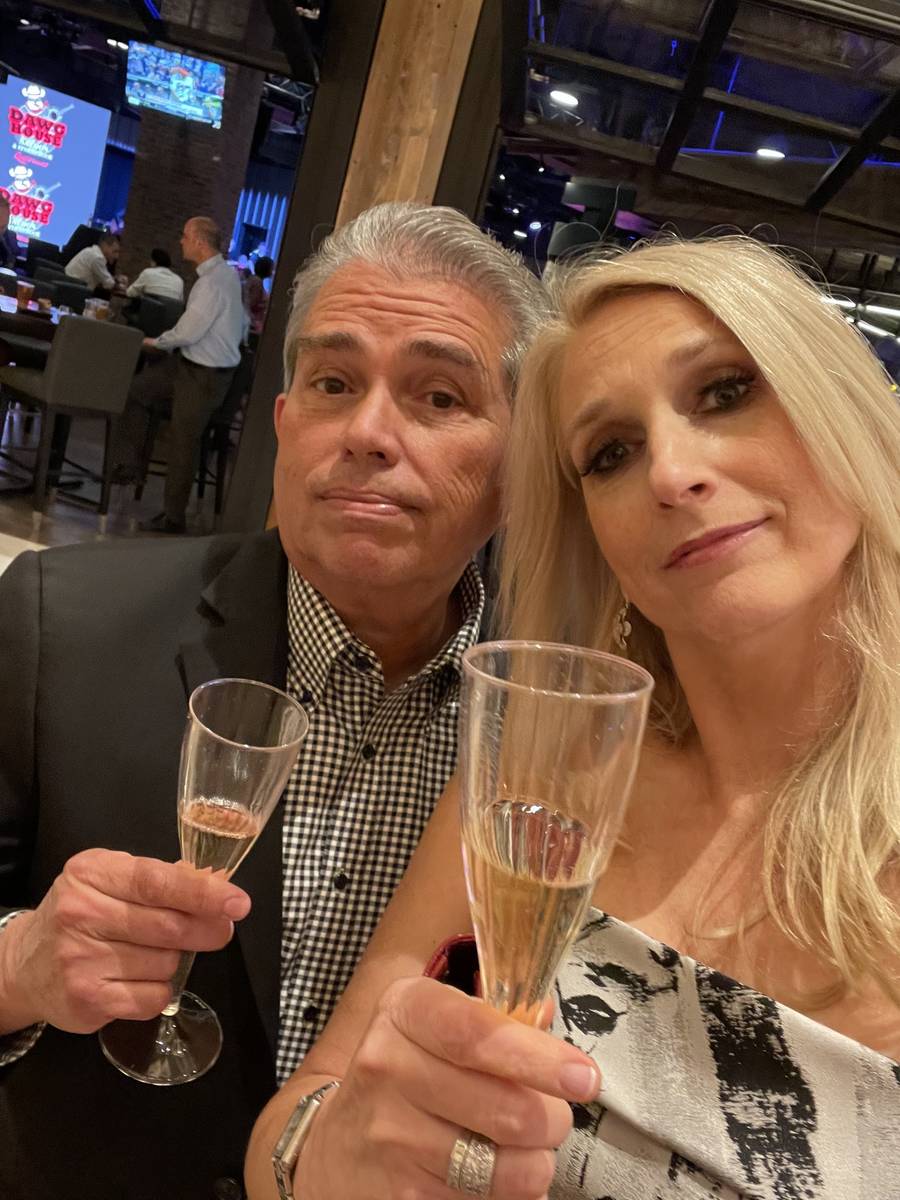 It has become an inevitability at Vegas resort openings. Everyone is trying to get to Paris.

Extolling a “Free Britney” vibe, Hilton also shouted out to Spears, “This is for someone I have been thinking of a lot today,” and continued to pump the EDM behind her “Paris Hilton” MacBook Pro.

Spears this week pleaded in Los Angeles court to end the conservatorship managed by her father, Jamie, and regain control of her career and personal life. Hilton is a longtime supporter of Spears. The Hilton family, including Paris’ parents Rick and Kathy Hilton and her sister, Nicky, all were in attendance at the opening party.

It’s wasn’t quite Beacher’s Madhouse, uppercase, but it was a kinda Beacher’s madhouse as former Vegas stage star, producer and promoter Jeff Beacher was in the thick of the mix.

Beacher says he is retired from live entertainment, for the moment, his most recent project the Beacher’s Madhouse annex at MGM Grand (now the Jabbawockeez’ theater). But Beach is still front and center as an associate of Hilton’s, and also has worked behind the scenes with Resorts World President Scott Sibella to set up the resort’s partnership with the cryptocurrency exchange and custodian Gemini.

Beacher also co-hosts a podcast with Kelly Osbourne. As we have found over the years in VegasVille, Beacher always finds a way to take up residency in the hurricane’s eye, and that was the case Thursday. He escorted both Hilton and Usher to the party. I feel we have not seen the last of Beacher in Vegas.

Las Vegas Raiders owner Mark Davis lost count of how many selfies and photos he posed for during the opening. Easily more than 100. This influx escalated precipitously after the doors opened to the public at 11 p.m. The wave crested at a late-night dinner at Wally’s with Westgate Las Vegas President and General Manager Cami Christensen and CPA Larry Delson.

Early in the night, Christensen and Delson snapped their own selfie whenever Davis was asked to pose himself. They stopped at around 40, and this was about an hour before the public descended on the hotel. “It went on and on, for hours,” Christensen said. “But M.D. loved it.”

Circa co-owner Derek Stevens was caught in full chat with Gov. Steve Sisolak and first lady Kathy Ong at Gatsby’s Cocktail Lounge (and a hat-tip to my friend and colleague Eric Gladstone for nabbing a photo of Stevens, Sisolak and Ong in summit mode). “Extraordinary,” was Stevens’ one-word review of the resort on Friday morning.

McBeath and Sibella have taken parallel paths in the Vegas hospitality industry. Both are Las Vegas natives and graduates of the UNLV College of Hospitality. As McBeath said, “I am impressed, and I’m happy for Scott. Tonight is his Super Bowl.”

I had an interesting chat with Yunker about his company’s now-vacant entertainment venues. There seems no plan in place, yet, for those spaces. But Yunker emphasized that Caesars will keep “Entertainment” in its title, which is good to know. Changing that logo could be costly.

Dawg House Saloon is where you’ll find the Kats! Bureau for multiple visits. The music club, sports bar and sports book is a wonderful enclave full of big screens and live music every night. It’s also where we watched the Golden Knights fall to the Montreal Canadiens. You could have called the place the BuzzKill for about 12 minutes.

Applause from the top to Dawg House president and CEO Steve Ford, whose company is putting 250 employees to work at Resorts World.

Baldizan’s title is familiar, but new to him. He’s essentially taken the position vacated by George Kliavkoff, who this month left that post to take over as commissioner of the Pac-12 Conference. Baldizan oversees all facets of entertainment for MGM Resorts internationally (but not the company’s BetMGM sports books and app, which operates as a separate company).

In the AEG hemisphere, we’re still awaiting the identity of the fifth headliner at the Theater at Resorts World, joining Celine Dion, Carrie Underwood, Katy Perry and Luke Bryan. We can say this performer is not a music act and will take the stage after the headliners clear out. So, a late-night kinda show. It’s all so tantalizing.

Also spotted at the opening, on the heavily populated pool deck were a range of superstars and news makers. Kris and Kendall Jenner walked past New York-New York headliner Terry Fator and his wife, Angie. Adam and Bri Steck of SPI Entertainment and powerhouse Vegas attorney Mark Tratos were on the perimeter, in the Bacardi cabana zone.

Producer David Saxe (of David Saxe Produtions) and his wife, Alana, were on the edge of the Usher-Aoki-Hilton gaggle. So were Mat Franco of Linq Hotel and his wife, Tianna. Remarkably, Saxe and Franco had not met until Thursday night. They need to get out more.

And, chatting it up as he was out of character, was Sam Wills, aka Tape Face at Harrah’s. He and sidekick Christina Balonek were at, but not in, the pool.

Rene-Charles Angelil, the artist son of Celine, debuted as a DJ headliner prior to Hilton’s arrival, which preceded Tiësto. We didn’t see this performance, for which there was no advance notice, sadly. Angelil released the adult-themed “Casino5” in January.

You might be asking me, how did you like the resort, Johnny? The scale is impressive, about like walking all the way through MGM Grand, from the main porte cochere to the Grand Garden Arena. Your feet feel this place. Its finishes are more refined than I’d expected for such a vast property. The restaurants certainly cover the cuisine landscape. Gatsby’s, the Italian eatery Brezza and ¡Viva! all drew high praise but hey, too much networking and cajoling to get a proper read on the food. For a separate visit.

The pools are beautifully laid out, the size deceptive as they are designed as individual spaces, rather than one giant pool deck. The entire place is upscale. You feel the Genting Company just spent lavishly and generously everywhere at Resorts World, and the outcome is evident. I had the same feelings while walking through the openings of Wynn Las Vegas, Aria and then-Mandarin Oriental at City Center, and the Cosmopolitan. That is fine and refined company.

On the downside, the casino floor does suffer from the latest trend of imposing slot banks. Some of these machines are as big as tiny houses. How you design around the sea of towering devices escapes me, but this also was evident in the separate walk-throughs of Virgin Hotels, where the casino floor was overtaken by Betti The Yetti, Wheel of Fortune and assorted Pandas. Maybe top these machines with palm fronds or something.

Also, in the block-and-tackling department, directional signage and directions in general need to be emphasized at Resorts World. How do you find the pool? This required name-tagged staffers telling us to head to any hotel lobby, then take the elevator to the fifth floor. There also is more than one parking garage for hotel guests (you might learn this the hard way).

But for those of us who have seen the closing and demolition of Stardust, all the way through to the moment the doors flew open last night, Resorts World is a massive achievement. We’ll be back. Save us a spot at Dawg House.