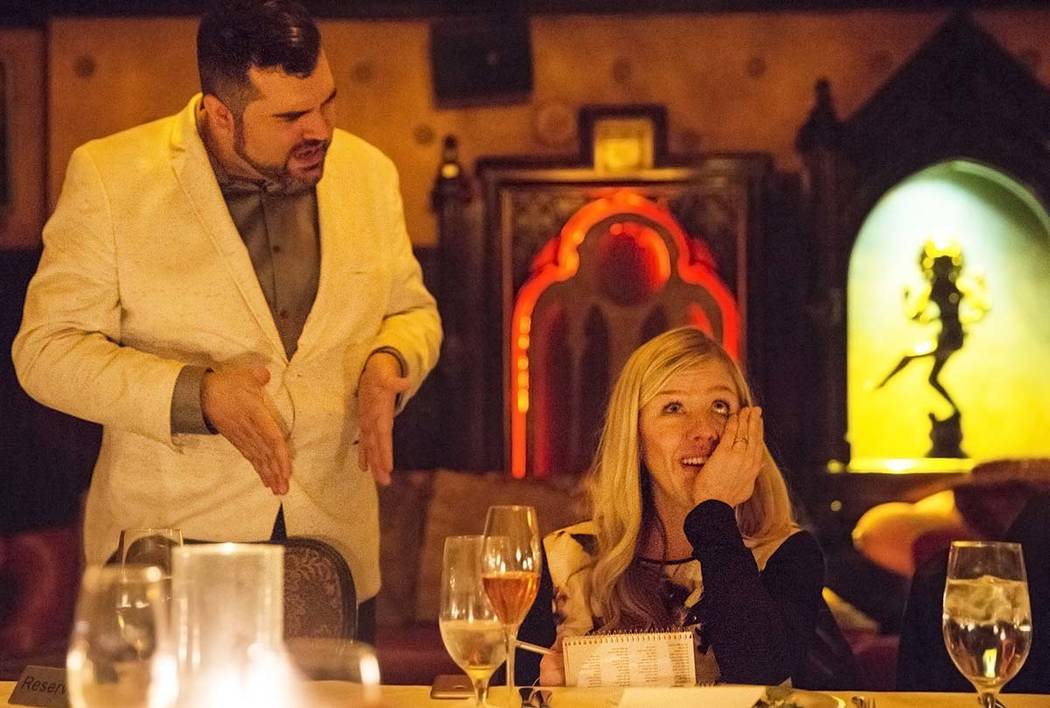 Psychic medium Thomas John informs Kari Cichoski that her deceased father was still with her during her wedding during Dinner with the Dead on Friday, Jan. 20, 2017, at the Foundation Room at the Mandalay Bay hotel-casino in Las Vegas. Benjamin Hager/Las Vegas Review-Journal 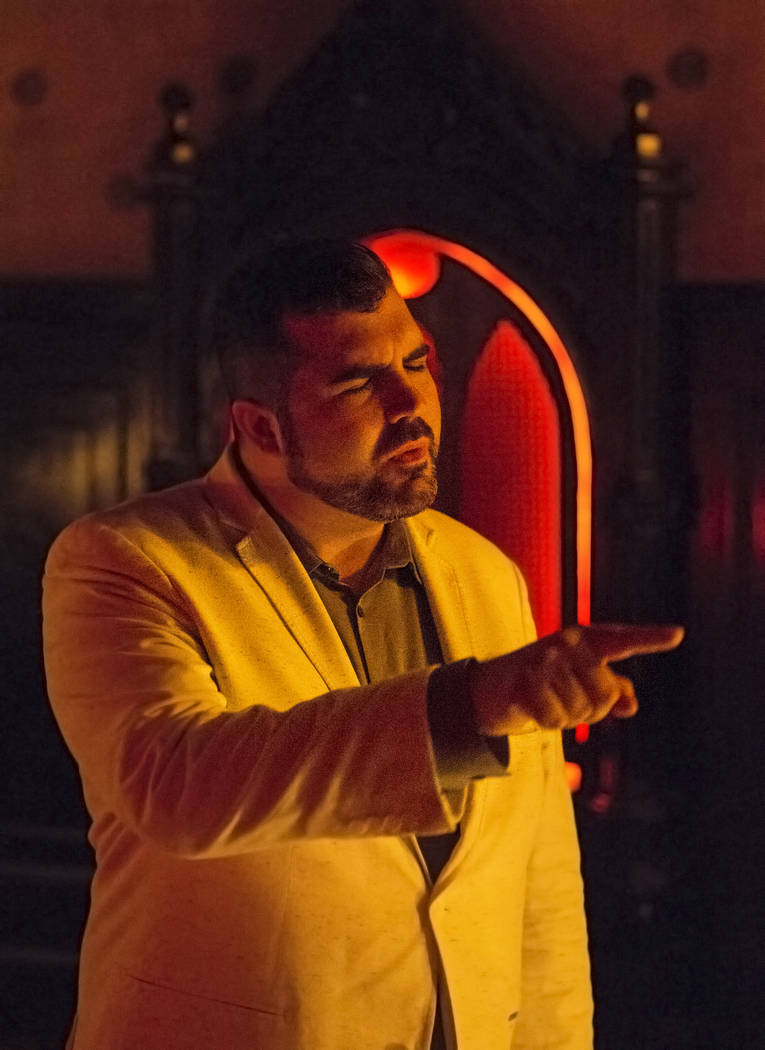 Psychic medium Thomas John provides a reading to a guest during Dinner with the Dead on Friday, Jan. 20, 2017, at the Foundation Room at the Mandalay Bay hotel-casino in Las Vegas. Benjamin Hager/Las Vegas Review-Journal 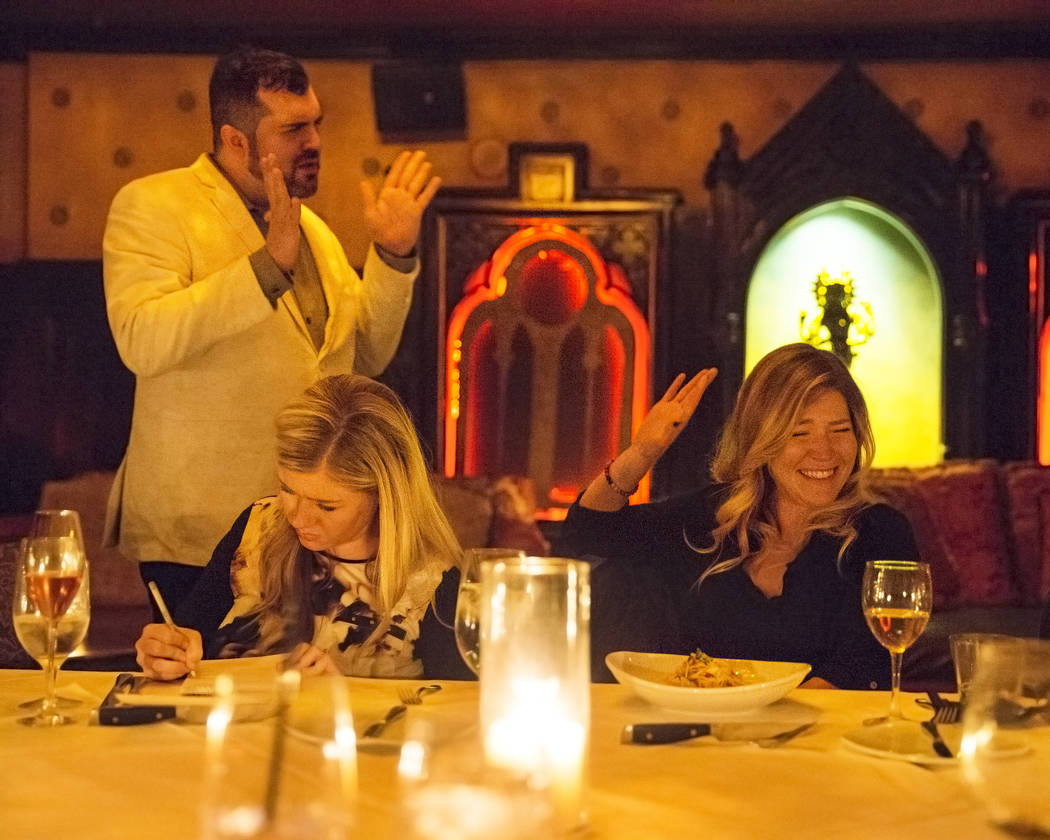 Psychic medium Thomas John, left, provides readings to guests during Dinner with the Dead on Friday, Jan. 20, 2017, at the Foundation Room at the Mandalay Bay hotel-casino in Las Vegas. Benjamin Hager/Las Vegas Review-Journal

Even before he opens at Caesars Palace, it’s clear not everyone buys Thomas John’s claims of summoning the deceased in his live performances.

And his producers are defending his production months before opening night.

John, the psychic medium opening in January at Cleopatra’s Barge, has been the focus of a “sting” operation by Susan Gerbic, a well-known skeptical activist who has homed in on such high-profile psychics as John, Tyler Henry and Sylvia Brown.

Gerbic led a team of like-minded skeptics on a sting operation of John (legal name Thomas John Flanagan) in 2017. The effort, dubbed Operation Pizza Roll, was effectively chronicled in a lengthy story published in February in The New York Times.

Gerbic and her fellow skeptics spent 10 days posting fictitious Facebook profiles before John’s appearance in Los Angeles. She registered herself as “Susanna and Mark Wilson,” created alternate biographies, then showed up at John’s show along with Mark Edward, a mentalist/magician and frequent partner with Gerbic in such sting operations.

Among other fabricated details, Gerbic had posted that she lost a twin brother named Andy to pancreatic cancer, and showed up to the show with a handful of tissues (and hidden recording devices) to indicate she might become emotional. John walked out and quickly said, “Somebody is making me aware of cancer,” and told the audience he was communicating with a twin brother who needed to reach his living sister.

Gerbic, as Susanna, held up her hand.

Through the live conversation, according to the Times account, John pointed to the area of Andy’s pancreatic cancer, then said the brother was making light of “Susanna’s” appearance at the event, “He’s making fun of you, teasing you about being here with me!”

Also, from the story, “He knew that she and her brother grew up in Michigan and that his girlfriend was Maria. He knew about Susanna’s father-in-law and how he died.”

All of the information was posted on the Operation Pizza Roll Facebook profiles. Gerbic later said that John tweeted her a heart emoji, which she took to mean that John had learned Gerbic actually paid for Susanna’s the tickets to the event.

John has steadfastly denied performing online research of those who attend his shows. Of this particular sting, he told the Times, “For Susan to come to a reading and get a two-minute reading and say, well, ‘I made a fake post about my dog, Buddy, and my father who died,’ it’s really not any sort of scientific testing of psychic powers First off, someone will have to be a scientist to do a scientific experiment, not someone who used to be a photographer at Sears.” (Gerbic is indeed a retired studio manager for a company that had operated studios in Sears.)

“Unfortunately, there is always that group of people that are trying to bring psychics and mediums down, and non-believers,” Glist said in a text message. “I can tell you firsthand I have seen Thomas in action and have brought people and he had no idea were going to be there and he has given them perfect readings.”

Glist, who introduced John to officials at Venetian/Palazzo prior to pitching him to Caesars Entertainment, said he staged three presentations in Las Vegas.

“In each presentation, we invited people and brought in total strangers and never gave him a list or gave him any indication as to who was going to be there,” Glist said. “And I’ve watched him on three different occasions literally work the room reading total strangers and nailing the names of their family members who are deceased and talked about them in great detail.”

John has persevered and even prospered in the face of skeptical backlash. His “Seatbelt Psychic” show, which is a “Cash Cab”-fashioned series that has also been pilloried by Gerbec, airs on Lifetime. The show’s producer, James Corden, is developing a new show with John set to air on CBS All Access next year.

Glist reviews that success and those testimonials and asks, “Do you think CBS would put him on the air, and James Corden would get behind him to produce his television show, if they didn’t feel it was real?”

It depends on who you ask: That list of famous folks, or Susanna and Mark Wilson.