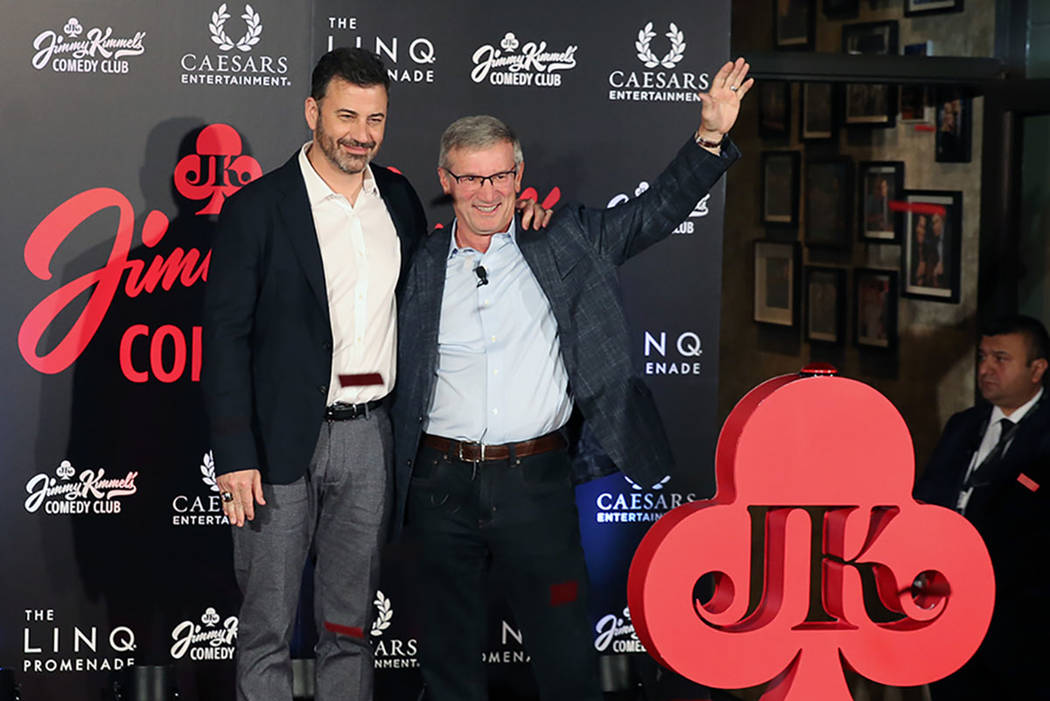 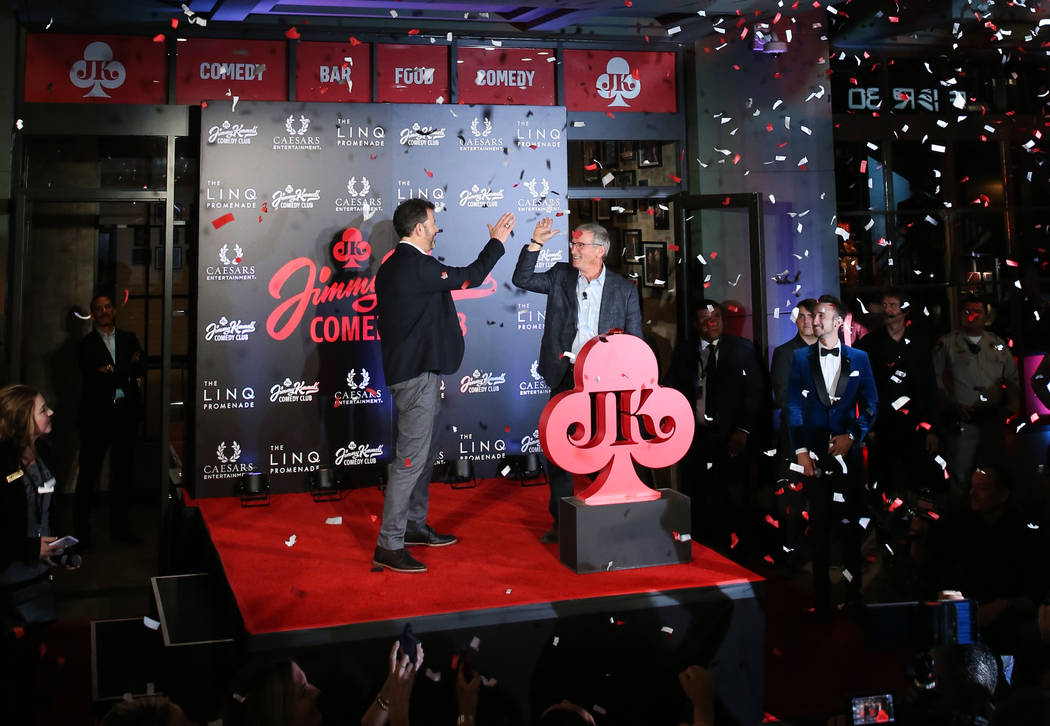 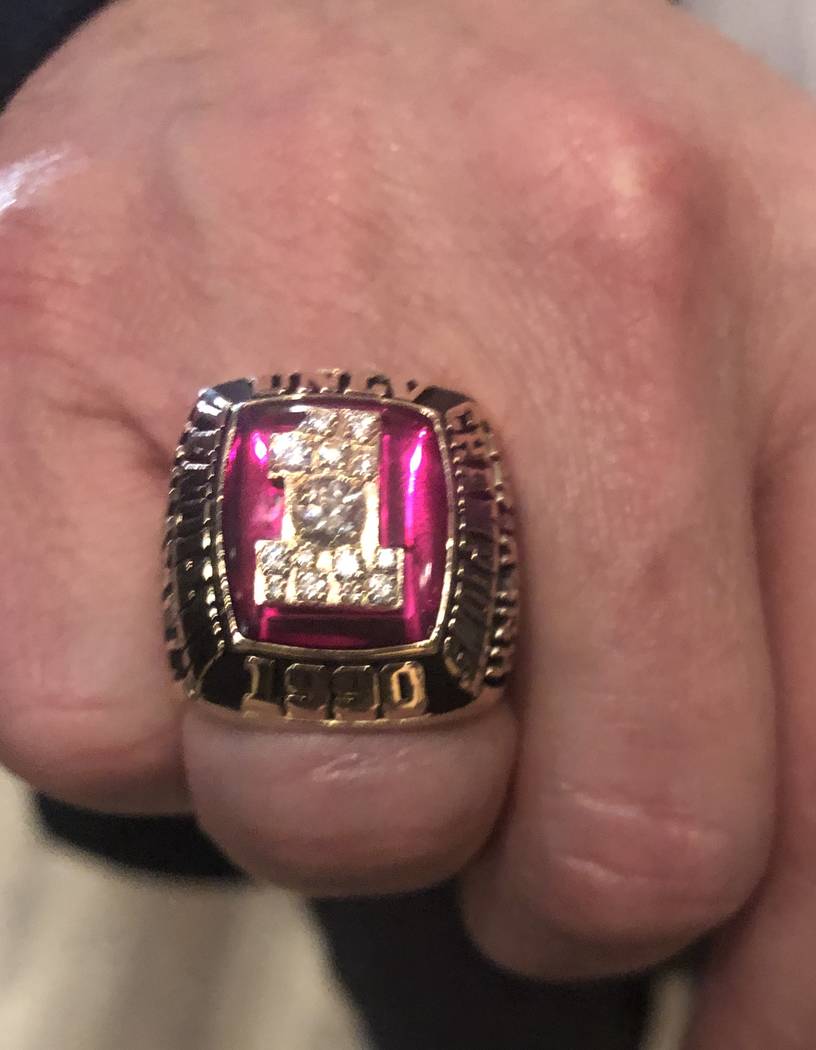 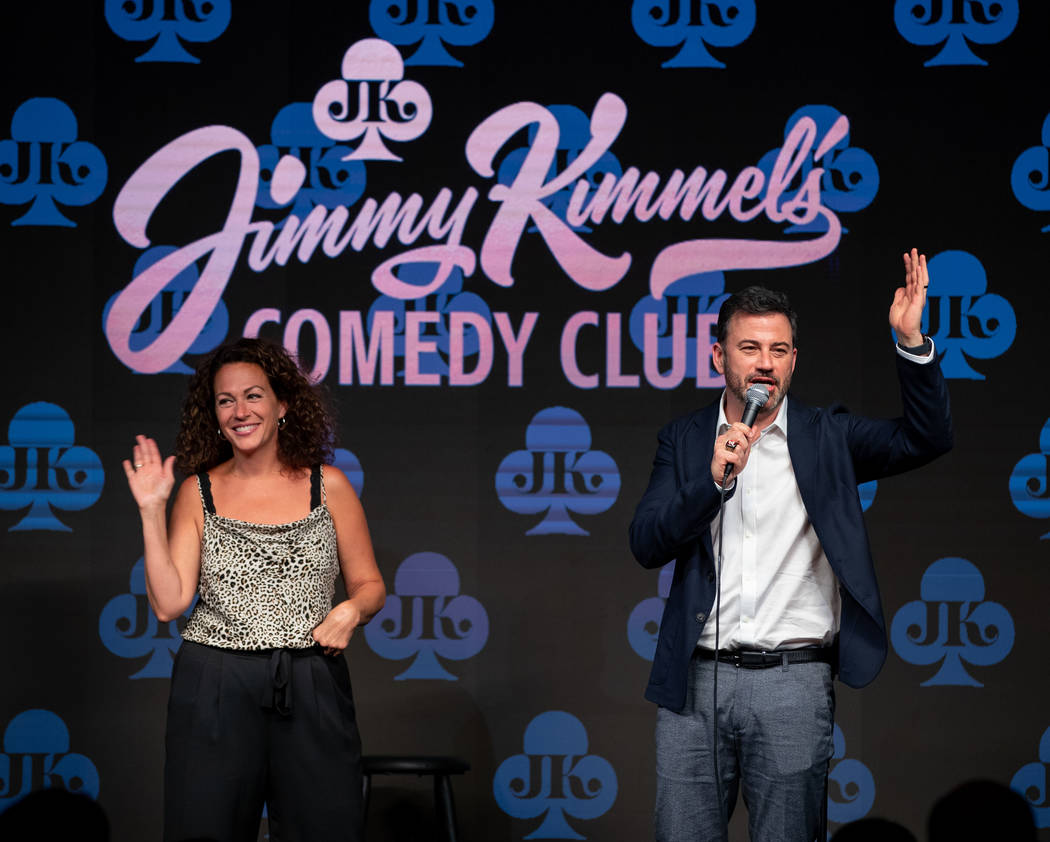 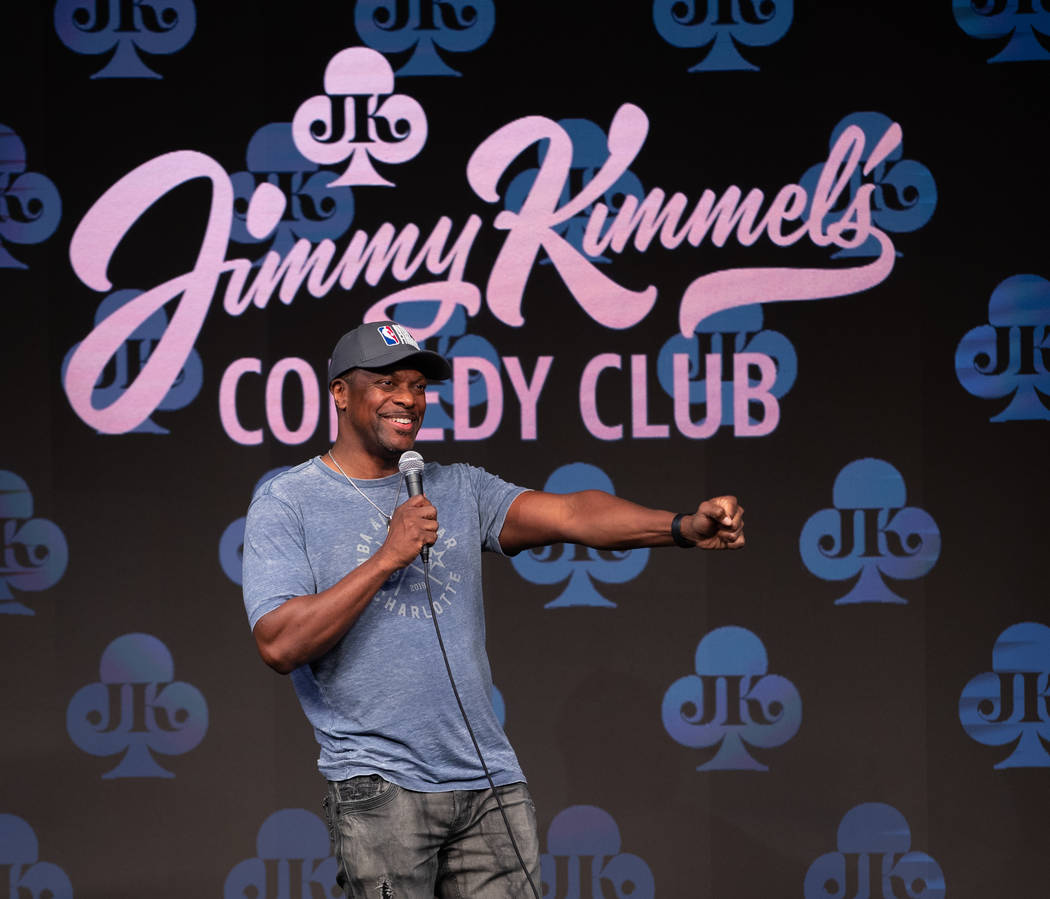 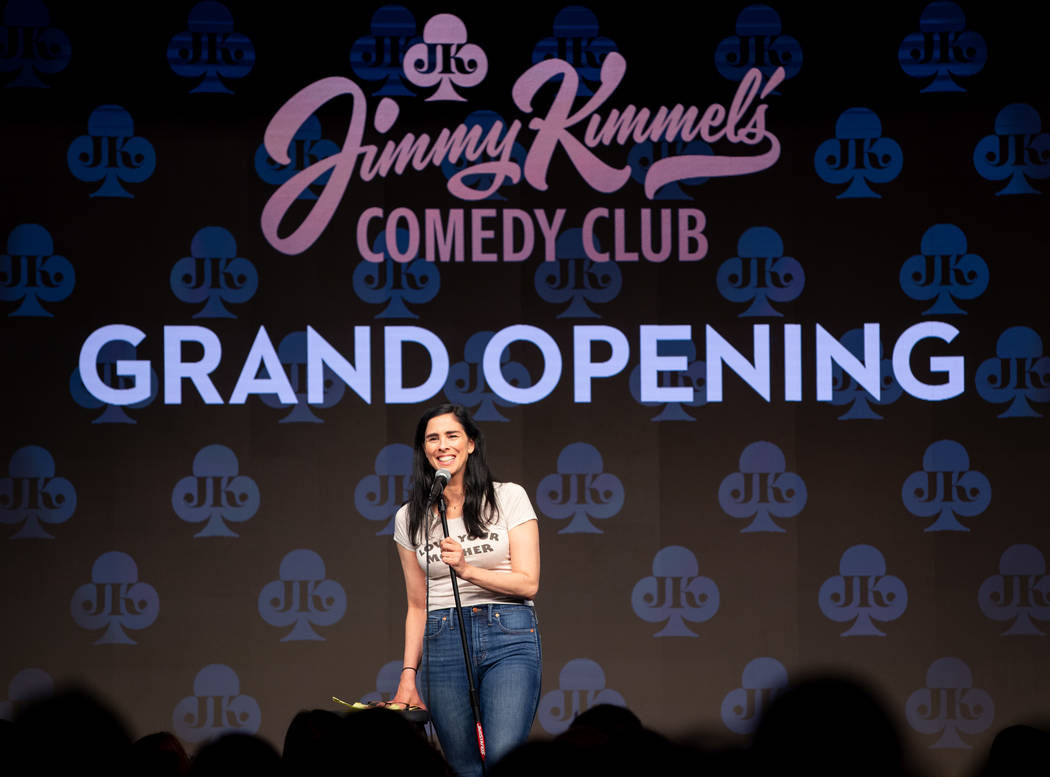 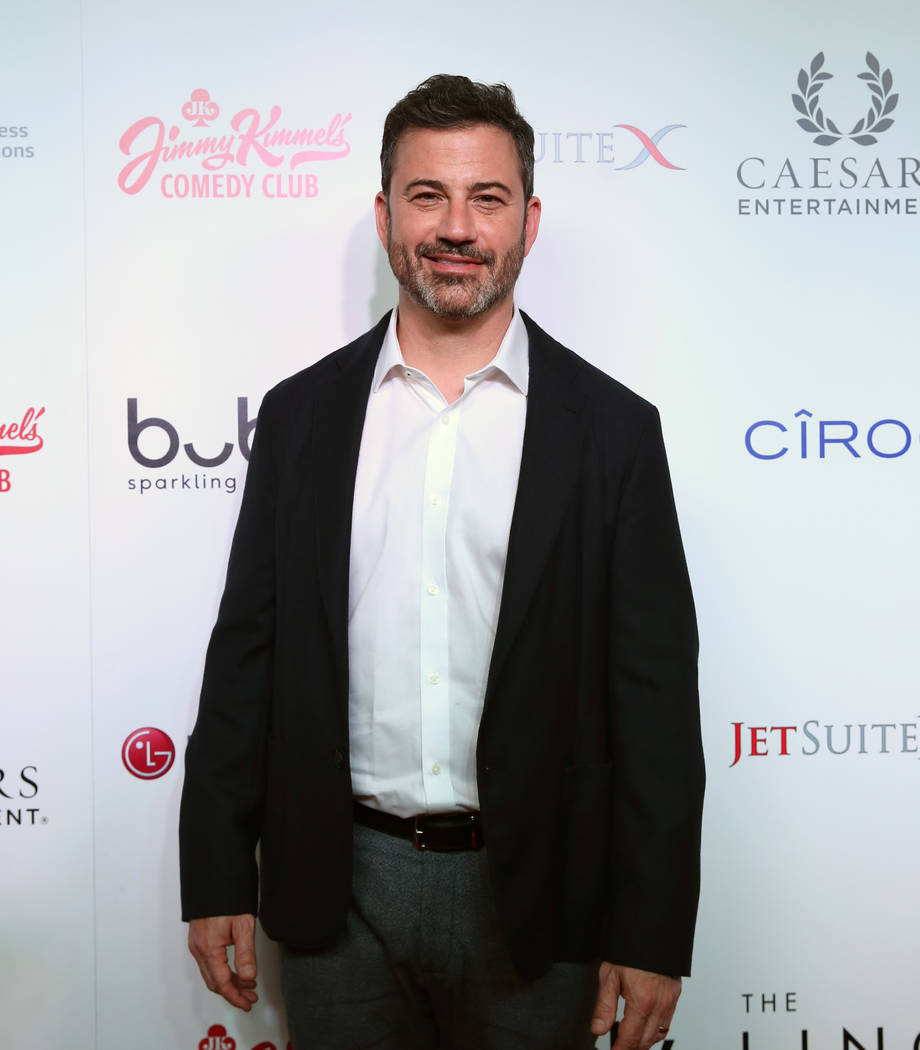 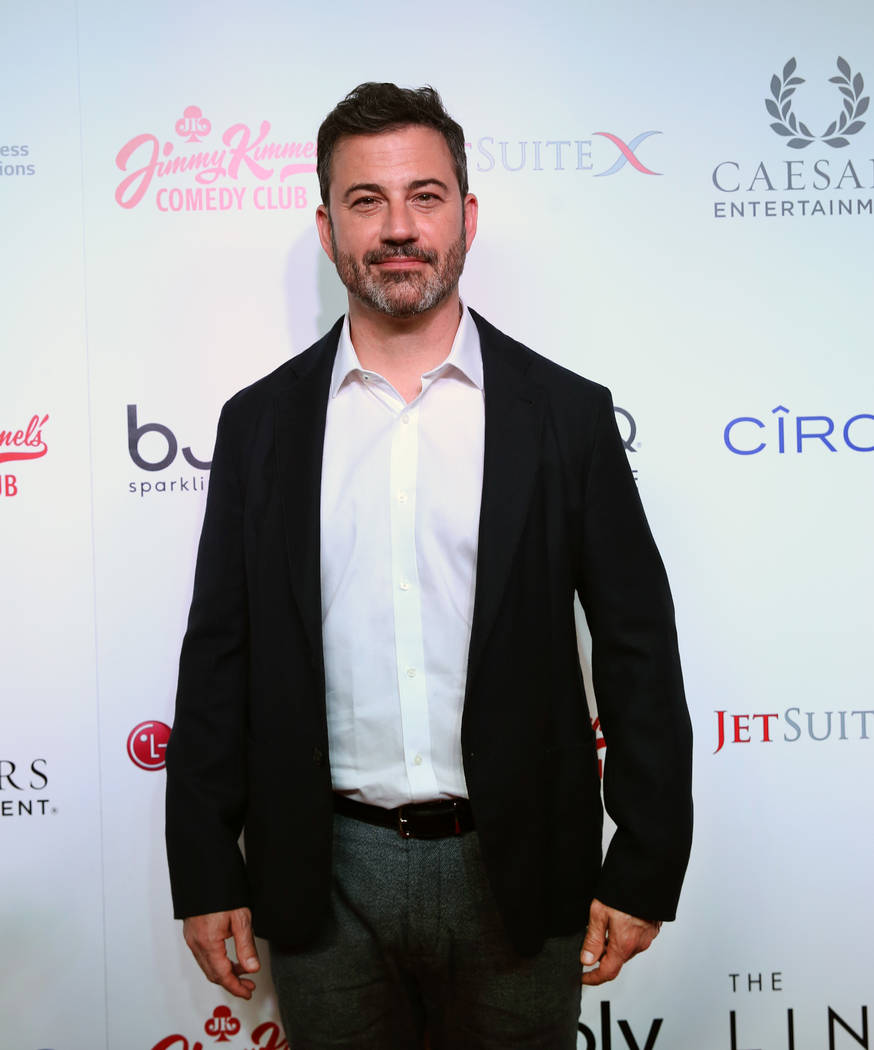 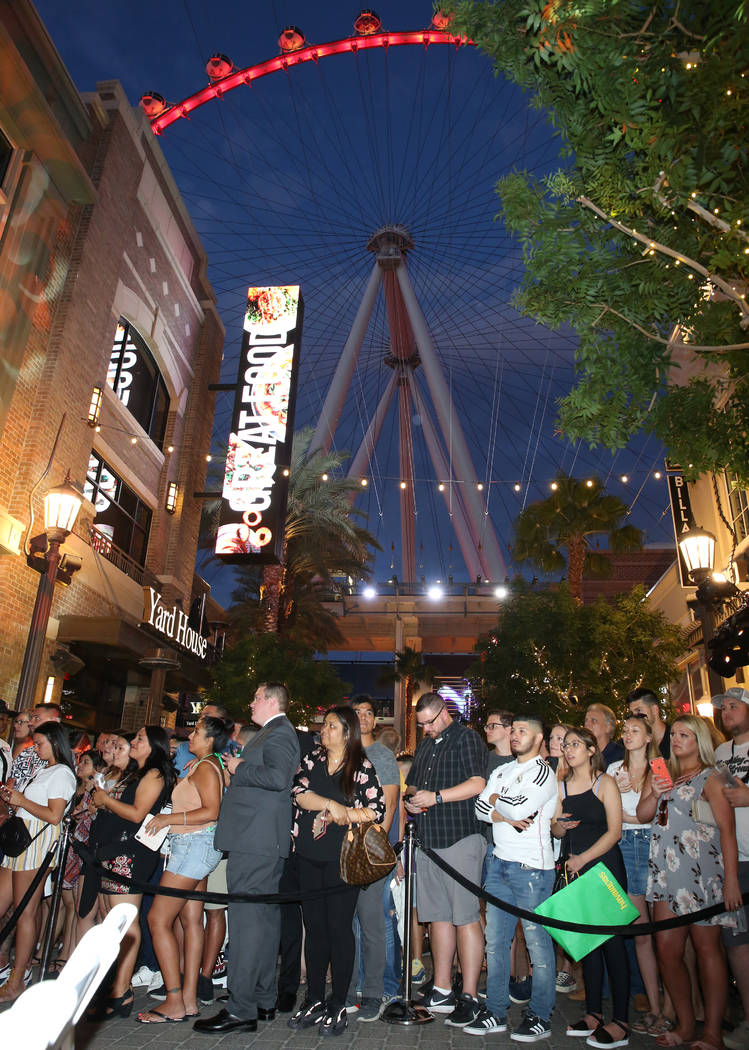 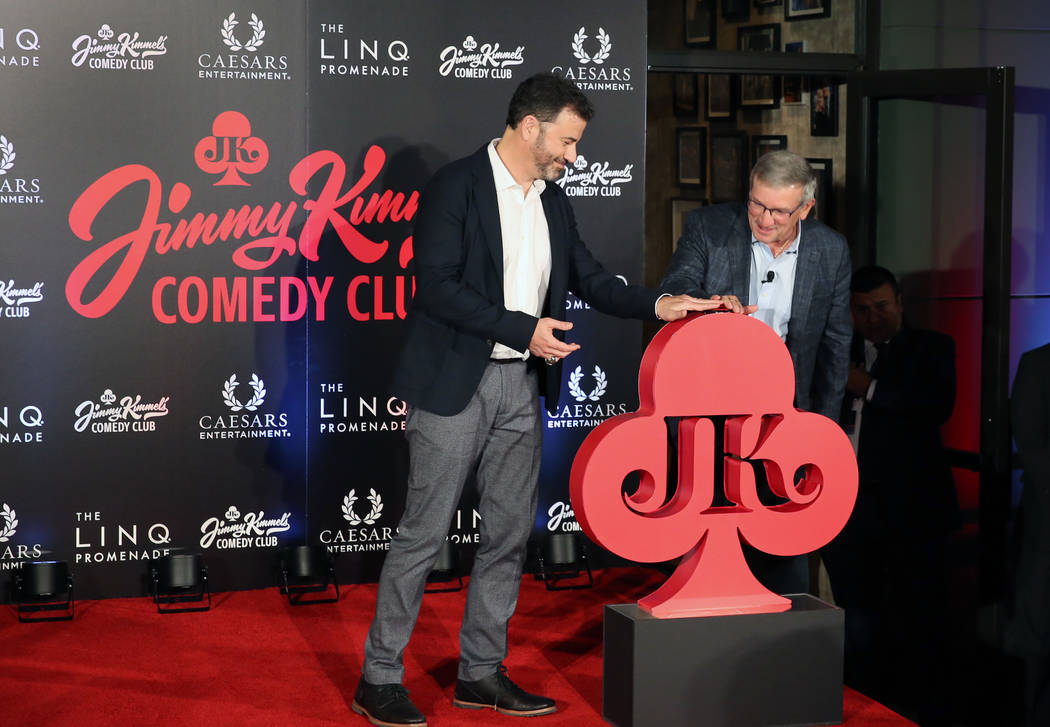 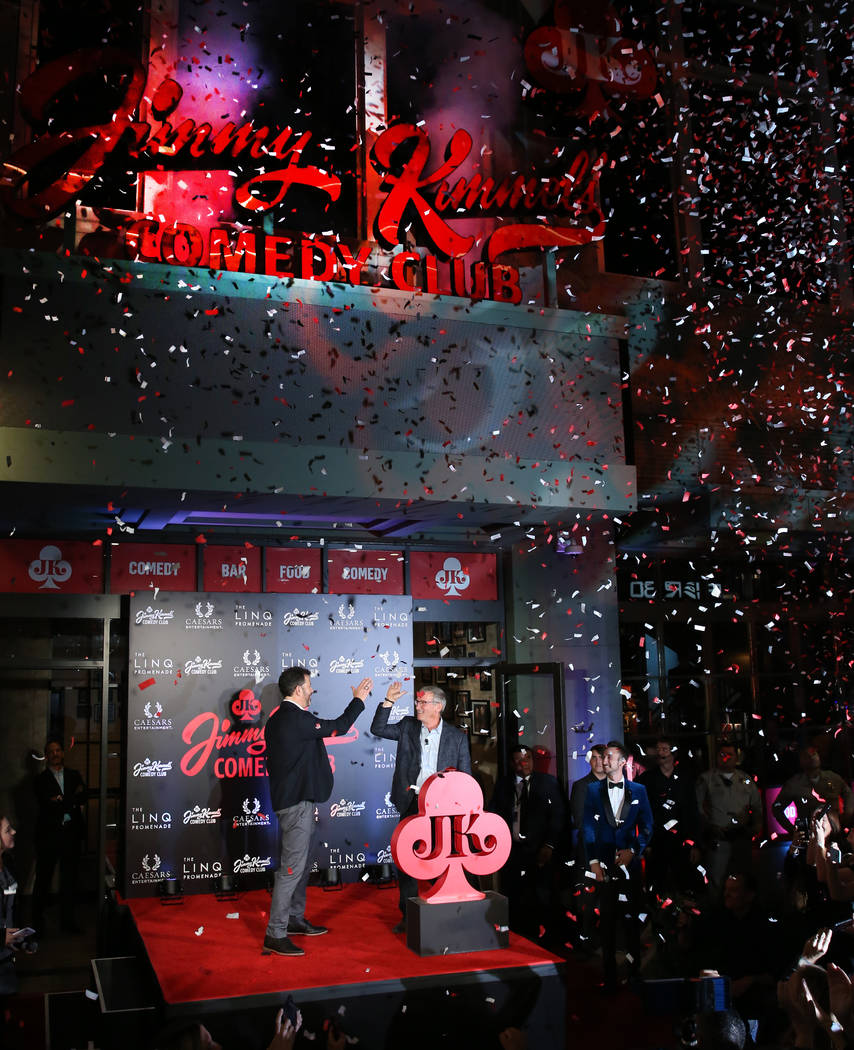 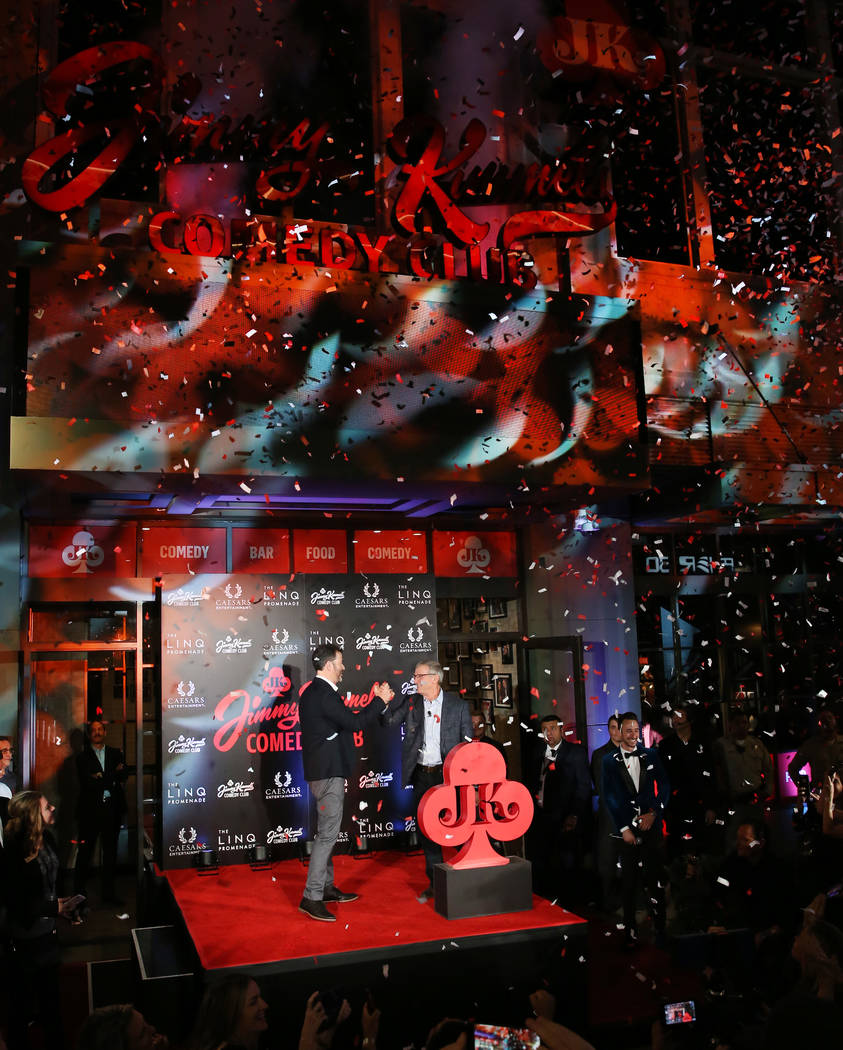 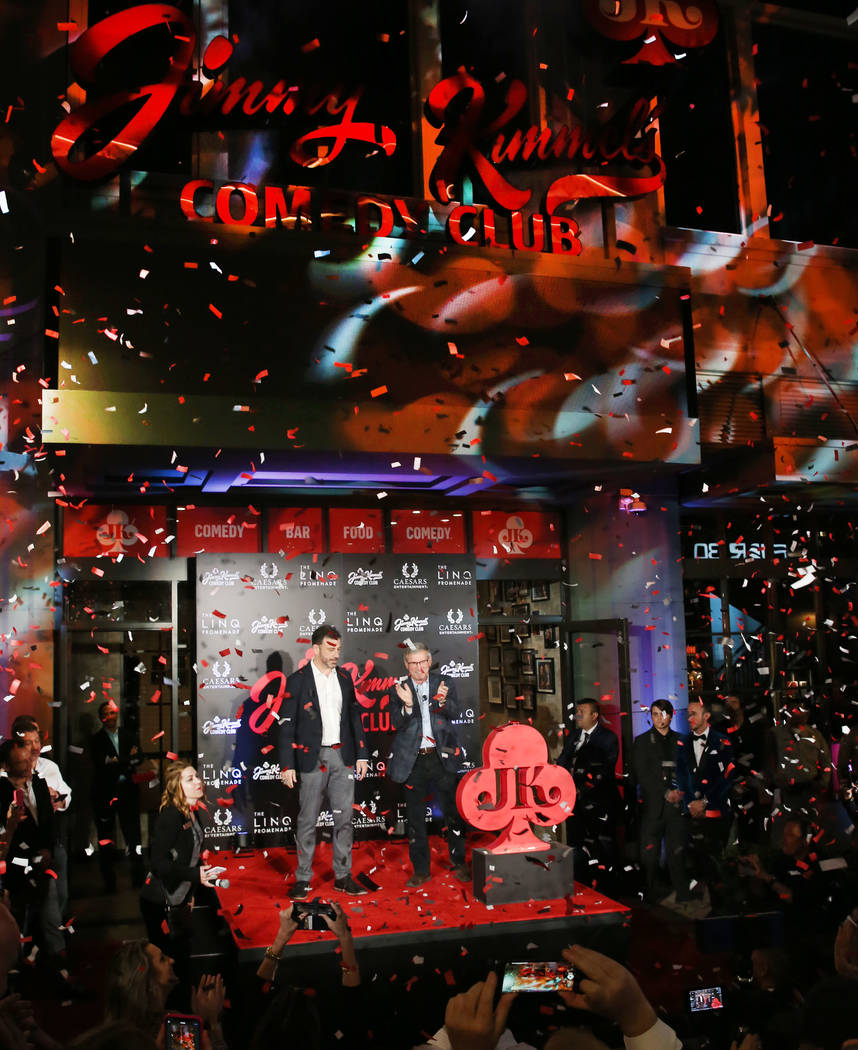 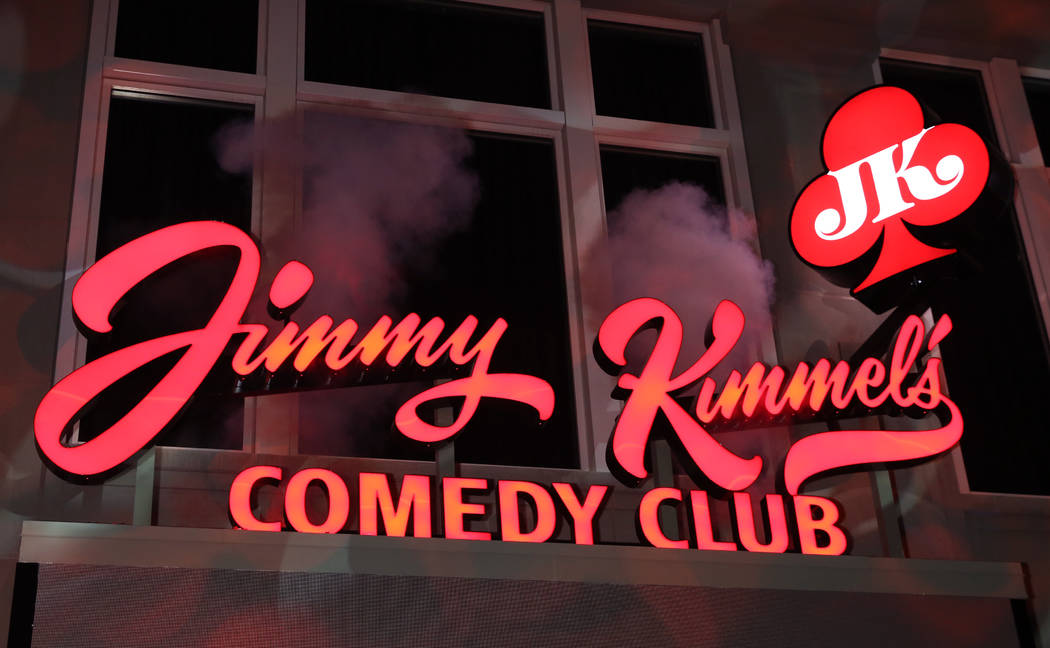 Jimmy Kimmel could never handle the rock, but he got one Friday night.

Kimmel is especially nostalgic about the UNLV Runnin’ Rebels basketball program, so dominant in his youth when he grew up in Las Vegas. One of the “mocktails” at his Jimmy Kimmel’s Comedy Club bar is Tark’s Towel, a reminder of UNLV hoops legend Jerry Tarkanian’s habit of gnawing on a damp, folded towel on the sidelines.

Caesars Entertainment President and CEO Tony Rodio presented the bauble, with a diamond “1” in a ruby setting, at a marquee-lighting ceremony marking the club’s opening. The piece was made by Jostens, created from the ring’s original mold.

Afterward, as Kimmel headed through the entrance, he stopped and said, “I can’t believe this, it’s so thoughtful,” and as a few onlookers trained their phone cameras on the piece, he added, “Get that right under the light. It’s beautiful.”

Kimmel also called his TV sidekick, Guillermo Rodriguez, to the stage for a few words. Rodriguez confided, “Jimmy, you know most of the time, I am drunk.” As Rodriguez loped offstage, Kimmel said, “People always ask me if Guillermo is an actor. I think that proves he is not an actor.”

Kimmel also said he has recorded his first comic from the club to appear on “Late Night With Jimmy Kimmel.” Beth Styling has actually taped her segment last week to air at a later date.

Kimmel has specified the first two charities he’s working with in his new campaign to donate his profits from the club to Las Vegas organizations: Casa de Luz Christian community resource center and the Children’s Heart Foundation.

Kimmel’s son, Billy, was born with a heart defect, and Kimmel has used his late-night talk show as a platform to promote affordable health care for families. Kimmel’s longtime friend Jim Gentleman, a veteran Las Vegas marketing executive, is working with Kimmel on herding the many philanthropic overtures.

Kimmel is not sure when or even if his show will tape again from the Strip. Ratings for the episodes in the first week in April gradually built to one of his strongest Friday nights ever, when Celine Dion was the superstar guest.

“I don’t know — I didn’t even know if I was going to re-sign my contract when we were here in April,” said Kimmel, who signed a three-year extension in April. “It’s expensive. It’s up to the sales department than me.”

As for how frequently the star whose name is on the marquee will actually visit the club, Kimmel said, “I’m hoping to come once a month, pop in, at least for the first year. It’s fun for me.”

Star chef Gordon Ramsey and Raiders owner Mark Davis were among the news makers to hit Friday’s opening at Kimmel’s club. Also around the room, Cleto Escobedo Jr. and his son, Cleto Escobedo III. The younger Escobedo is Kimmel’s friend since childhood and the bandleader of Cleto and the Cletones. Cleto Jr., known as “Cleets” to his friends, was Sammy Davis Jr.’s head butler at Caesars Palace. Sammy was Kimmel’s first concert experience, at the old Circus Maximus showroom, a very Vegas distinction.

A film crew was tailing Shaquille O’Neal at Saturday night’s Tyson Fury-Tom Schwarz heavyweight title bout for a reason. Shaq is the subject of an upcoming reality show on TNT.

Ex-“Sopranos” cast members Steve Schirripa and Michael Imperioli hit David Perrico’s “Pop Strings” show on Friday night. Schirripa knows his live entertainment — he booked acts for the Riviera as that hotel’s entertainment director in the 1980s-90s. One of the acts he booked: Lon Bronson’s All-Star Band.

“The View” co-host Meghan McCain attended “Opium” at the Cosmopolitan of Las Vegas on Friday night.

TRIX on a white Tesla at valet at Linq Hotel makes sense if you know that resort’s showroom headliner is magician Mat Franco. 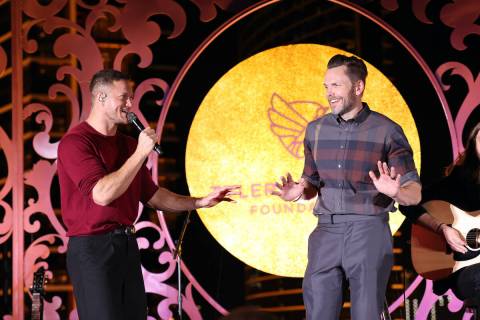