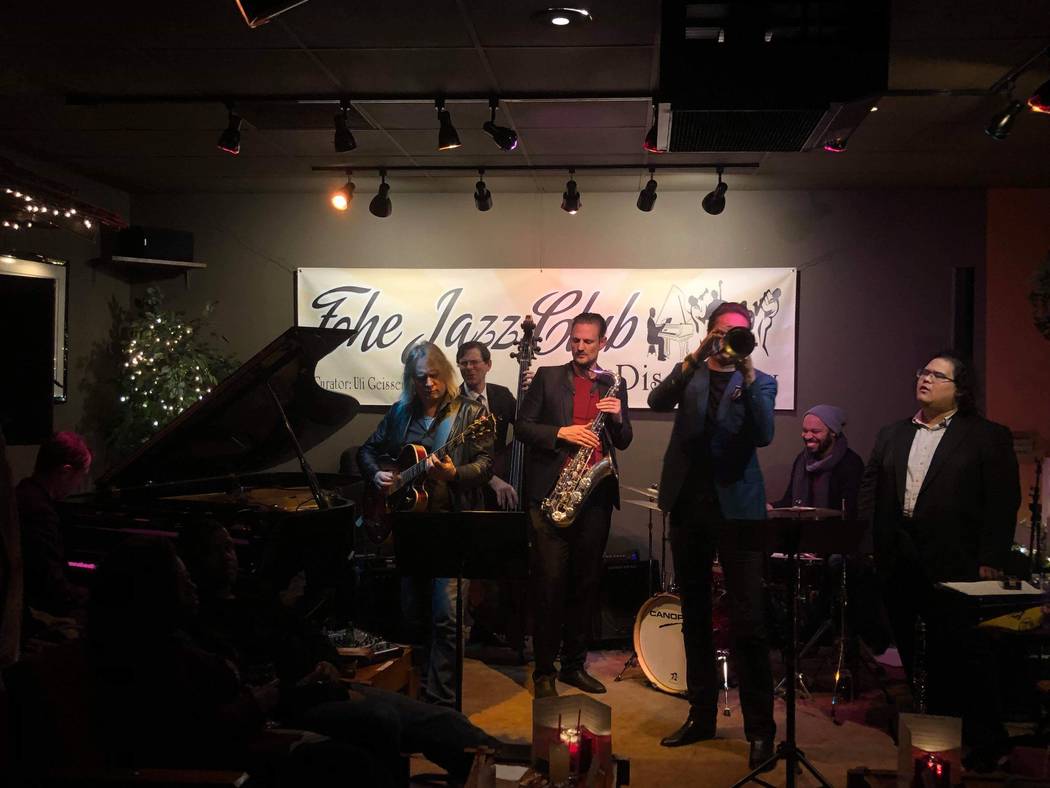 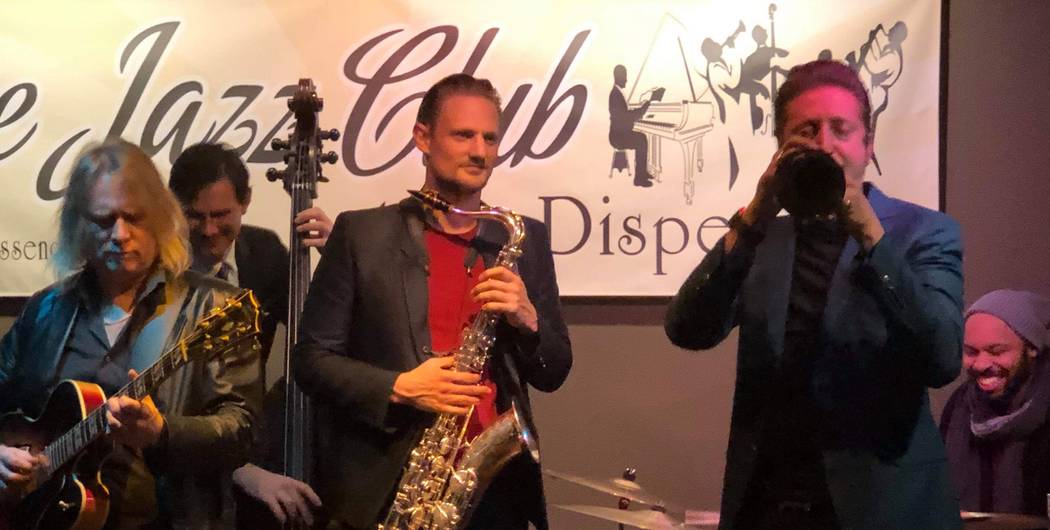 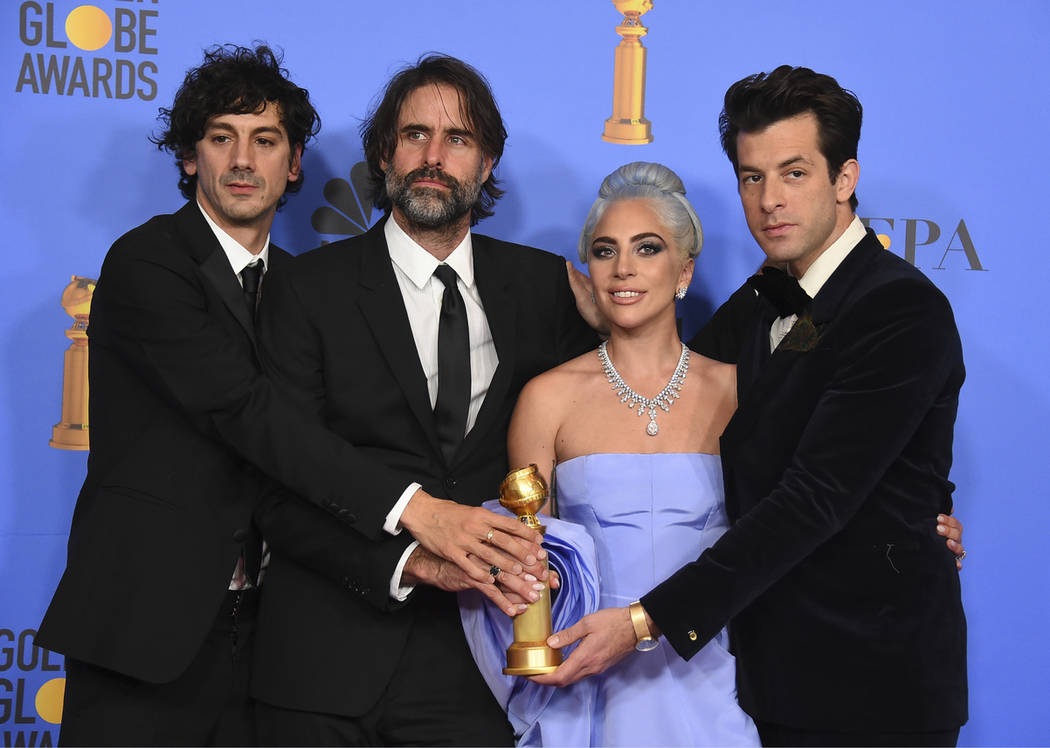 Anthony Rossomando, from left, Andrew Wyatt, Lady Gaga and Mark Ronson pose in the press room with the award for best original song, motion picture for "Shallow" from the film "A Star Is Born" at the 76th annual Golden Globe Awards at the Beverly Hilton Hotel on Sunday, Jan. 6, 2019, in Beverly Hills, Calif. (Photo by Jordan Strauss/Invision/AP) 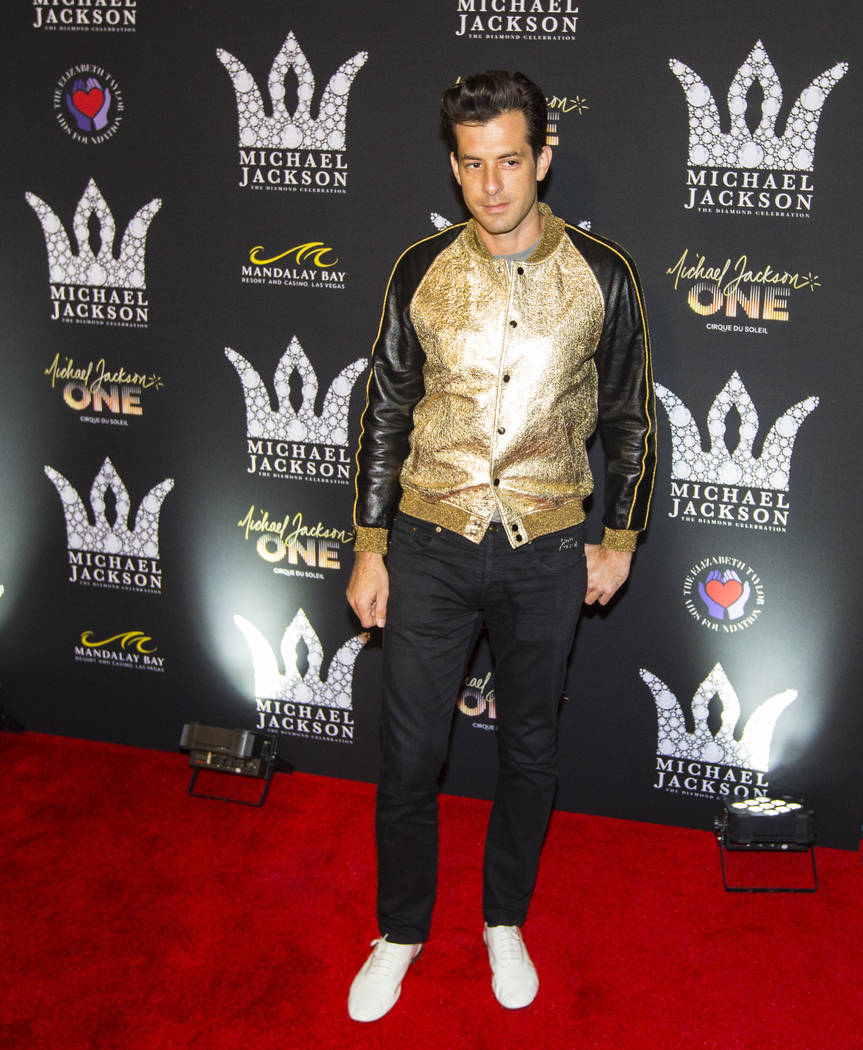 We often say of Dispensary Lounge that the magic is easy to find — just follow the path to the water wheel.

That’s the effect next to the stage/VIP seating area at the tavern at 2451 E. Tropicana Ave. The old watering hole, which opened in 1976, has become an unlikely jazz hang over the past seven years. It’s not uncommon for the club to be filled with Vegas musicians, in the crowd and onstage, such jazz greats as pianist Uli Geissendoerfer and vocalist Michelle Johnson hold court.

Wednesday night, the off-Strip joint — which is actually tucked into a strip mall — was host to a surprise visit from members of Lady Gaga’s backing band. They are otherwise known as the Brian Newman Quintet, out of New York and in town for Gaga’s Jazz & Piano show at the Park Theater on Sunday.

The New York crew joined Las Vegas musicians Steve Flora on bass, Julian Tanaka on clarinet and Jake Langley on guitar. The guests performed off and on throughout the night.

Flora, a bassist and tuba artist, has known the musicians for years and gave them a head’s up about the under-the-radar music haunt.

“Brian, Steve, and Alex have been close friends of mine for over 20 years,” said Flora, who has backed Andrea Bocelli at MGM Grand Garden Arena and John Fogerty in his Strip headlining shows at Venetian Theater. “I used to run a jam session in Cincinnati, and they started coming out when they were still in high school. Whenever they come to town, we hang. They are musicians and people of depth and substance.”

Dispensary owner Adele Bellas, who was at the club Wednesday night, had not been aware Lady Gaga’s band was going to be in the house until Barrett walked in was waved to the stage by Tanaka. Barrett was dressed, um, informally, like any self-respecting drummer about to join a jazz gig.

“When the drummer came in, I didn’t recognize him at all and Julian invited him to the stage, I thought, ‘Who is this? Is Julian going to actually let him play?’ ” Bellas said in a phone chat Saturday. “And Julian told me, ‘Oh, yes. He graduated from Harvard.’”

Bellas said the band was “very, very nice to me,” and said they would be back to play at the club “spontaneously” when they are in town for Gaga’s select big-band shows, which offset her “Enigma” production show. The next “Jazz & Piano” show is is Feb. 3, followed by another June 2.

It’s been no secret that Newman has been raking the Vegas entertainment scene for players to join his band onstage at Park MGM.

“I don’t want to give anything away, but expect old Vegas—like the days of Frank Sinatra and the Rat Pack, but also with the edge of the Lower East Side and the modernity that comes with an artist like her,” Newman told The Oprah Magazine this week. “It’ll fuse both of our influences.”

Newman went on the says the upcoming production is “the most wonderful show we could ever put on.” It’s an effort rooted in the hippest Las Vegas music haunts.

Ronson is On The Record

Mark Ronson has been announced as the first superstar resident DJ at On The Record at Park MGM. Ronson collaborated with Lady Gaga on “Shallow” from “A Star is Born,” an effort that led to a Golden Globe and a Critics’ Choice Award. HE debuts Feb. 2 and has booked 12 dates this year at the club, operated by nightlife wonder twins Mark and Jonnie Houston.

Ronson also worked with Bruno Mars on the unflagging groove hit, “Uptown Funk,” and collaborated with Miley Cyrus on the new single “Nothing Breaks Like a Heart.”

”Wayne Newton!” Foley said on the “black carpet” at Thursday night’s Vegas Golden Knights Foundation gala in the tented fortress at World Market Center. “He was just the nicest guy.”

Newton, a Vegas headliner for 60 years this May, has told me, “I never thought, in all the years I’ve lived in Las Vegas, we’d see an ice hockey team take over this city.”

We’re having a party at The Golden Tiki at 9 p.m. Wednesday. The occasion is the unveiling of the Polynesian-themed club’s latest shrunken head, yours truly’s, to join the famed likenesses on display around the venue.

As another recent honoree, DJ Ashba, told me at his unveiling, “It’s pretty weird.”

Note: The name of Joe Louis’ daughter was corrected for this version of the column.