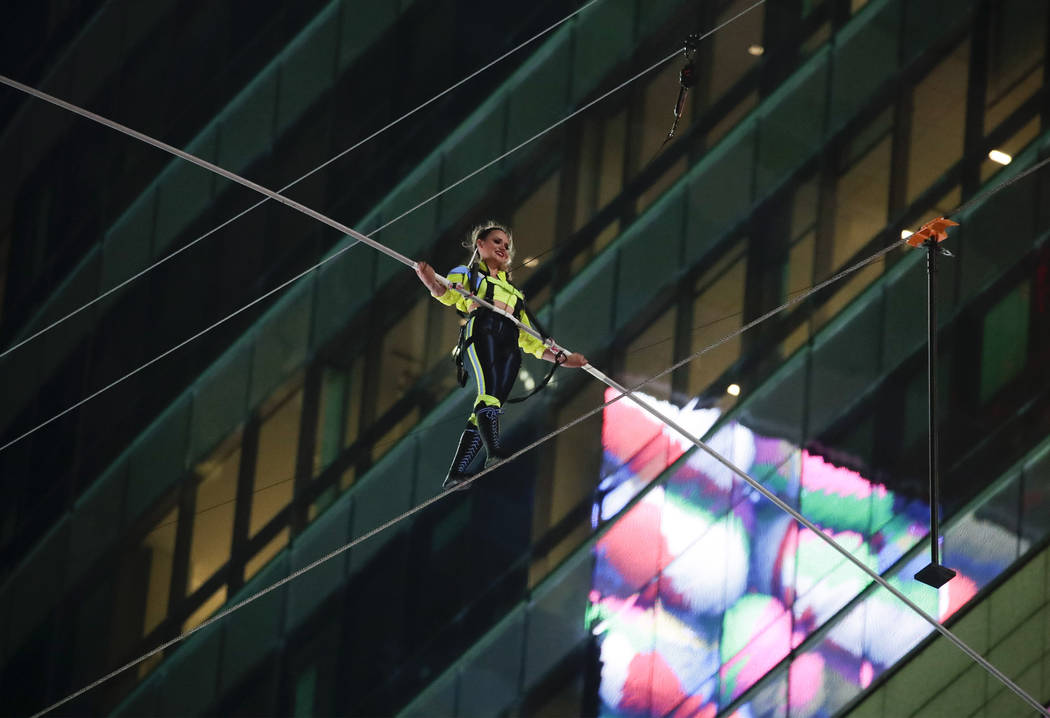 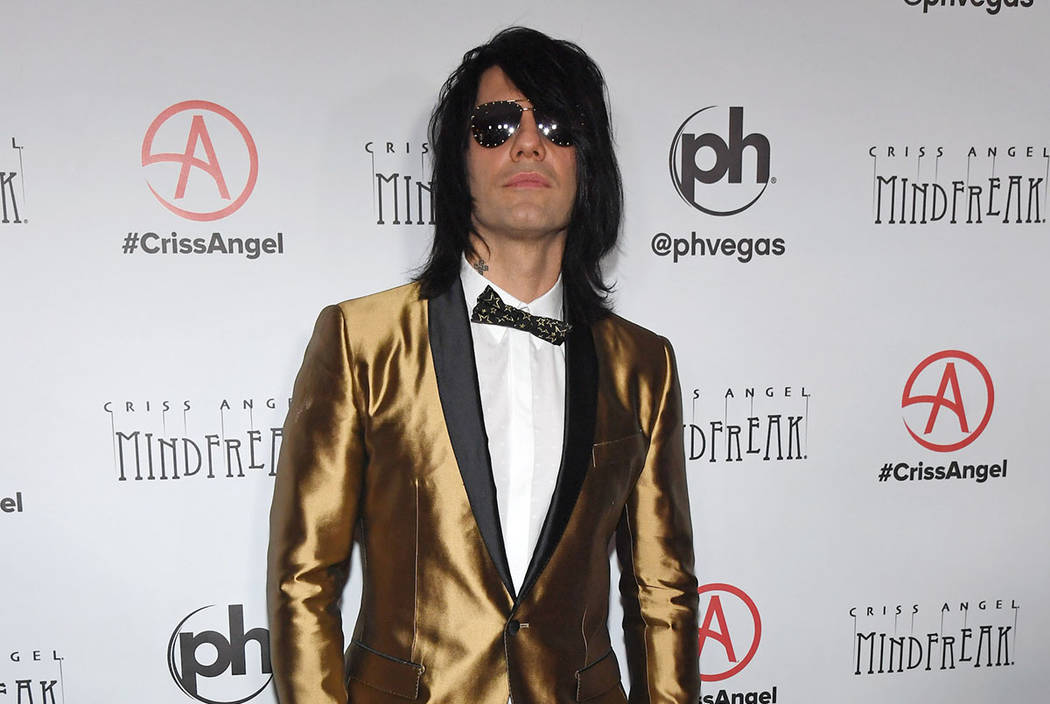 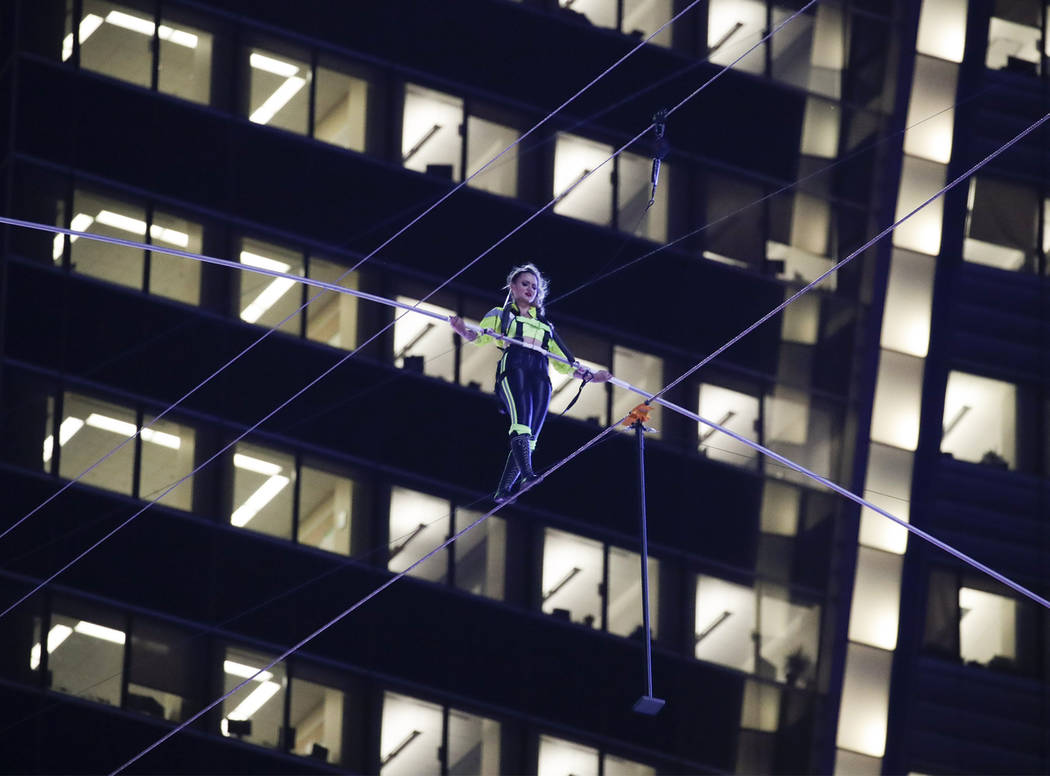 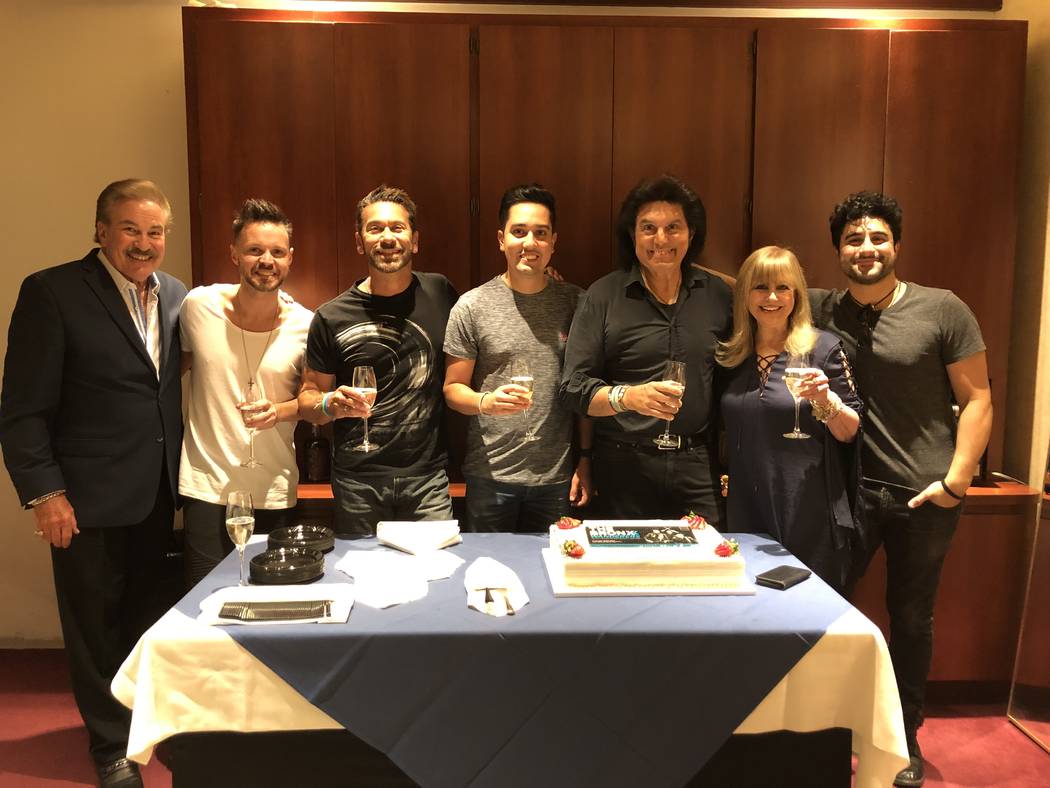 Las Vegas producers Alan and Kathi Glist are shown with the Bronx Wanderers on the act's 100th show at Mat Franco Theater at Linq Hotel on Jan. 20, 2019. (Bronx Wanderers)

No, they are The Flying Wallendas, gravity-defying family of acrobats who have thrilled circus fans for seven generations.

But Lijana Wallenda was not sure if she really wanted to go way back up there again.

“I honestly wanted to quit. It was terrifying. I’m embarrassed to admit it, but I really was,” she said in a phone chat Monday. “It was so hard I would have nightmares. I would wake up, totally stressed out, wondering what was wrong with me. But then I thought, ‘I don’t quit. It’s not in me to quit. That’s not me.’”

There is little question why Wallenda, great-granddaughter of family patriarch Karl Wallenda, popped awake, doubting her ability to continue in the family business. The longtime member of the “Absinthe” production team was seriously injured in a fall from about 30 feet during a human-pyramid act at Circus Sarasota on Feb. 8, 2017.

“I woke up with a tracheotomy tube, a feeding tube and my jaw wired shut,” she said. “It was a pretty traumatic way to wake up. I remember every moment of the fall, all the way to the ground, the ride to the hospital, all of it. I knew how seriously hurt I was. I really had flashbacks, over and over, of the ground coming toward my face.”

Which makes what Wallenda achieved Sunday night, live on ABC-TV, all the more stunning. Wallenda and her famous daredevil brother, Nik Wallenda, walked a tightrope some 25 stories above and 1,300 feet across Times Square. The siblings started at either end, and Lijana ducked between her brother’s legs as they duo continued their path.

Lijana actually mentioned the incident in Florida while looking down on the thousands of fans who turned out for the suspense-tinged stunt.

“I was actually thinking about the accident,” she said. “I didn’t want it to own me. I couldn’t let the fear control me. I had to control it. It was a very emotional, very poignant moment.”

The routine was not without some drama, as Lijana had to re-fasten her tether on her balancing pole midway through the walk. But the two finished off beautifully and hugged it out afterward as the crowd roared.

The idea was originally Nik’s, who has wanted to walk in New York for years. He suggested the Times Square location as a way to follow up the duo’s walk across Charlotte Motor Speedway in 2013.

“He asked me about it, and then we talked to our parents and we all felt it would be the right way to come back,” Wallenda said. “But I had no idea it would be so much work, mentally and physically. My ankle was throbbing through the training. Mentally, it was so hard. Having been on the wire all my life, I really hadn’t expected it would be so difficult. I didn’t even tell my family at the time what was going through my mind.”

The Wallendas are not planning to perform together, at least in the near-future. Nik has plans to traverse an active volcano. Lijana has always toyed with the idea of a walk across the Strip, as a way to promote “Absinthe” or simply as another made-for-TV spectacle.

But for now, she’s finishing off a flurry of media sessions in New York and Florida before returning to work at “Absinthe.” The event in New York was Wallenda’s crowning achievement, professionally, artistically and personally.

“I needed to get myself back, to be who I am again,” she said. “It’s such a triumphant feeling to come back in such a big way.”

Bronx Wanderers notched their 100th show at Mat Franco Theater on Thursday. They are also at 925 shows overall in Las Vegas, counting their days at Windows Showroom at Bally’s, where they opened Sept. 22, 2016 …

No movement until further notice on the dynamite cast of “Ester’s Totally Outrageous Brunch” at SLS Las Vegas. Count it as a closed situation until a plan is announced …

A new day: Caesars Entertainment entertainment officials have had no comment, yet, as to what their company’s merger with Eldorado Resorts means to the company’s plans for ongoing shows, or anything in development, in Las Vegas …

In a budget move, Human Nature is letting go of popular Vegas trumpet player Isaac Tubb. His last day after five years with the quartet from Australia is July 19. Marking its 10th year on the Strip, HN is in the process of moving off its “Jukebox” theme in favor of an emphasis on Motown songs at Venetian’s Sands Showroom …

Award-winning illusionist Criss Angel has been making bank on the road, with upcoming headlining dates in such locales as Stephens Auditorium in Ames, Iowa; the Peoria (Ill.) Civic Center and Casino Rama Resort in Canada. But his “Raw” show is a far tougher sell on Broadway. His final scheduled at Lunt-Fontanne Theatre at 7 p.m. July 7 was canceled, despite discounts from $299 to $99 per ticket. Many seats are still available for his July 2 opening night and seven other dates at Lunt-Fontanne.