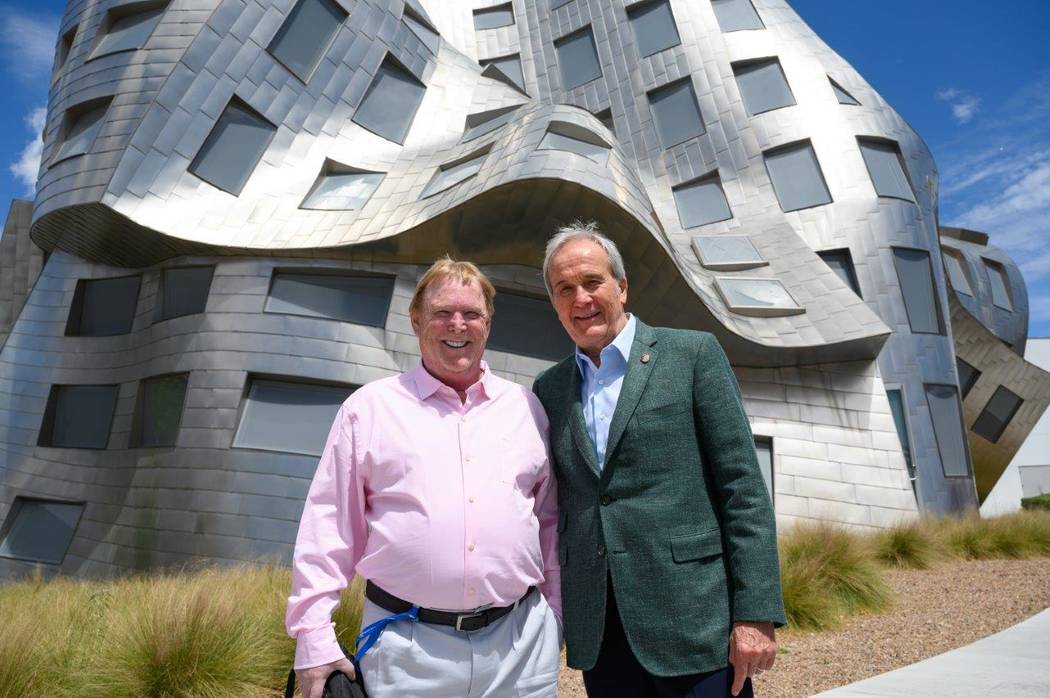 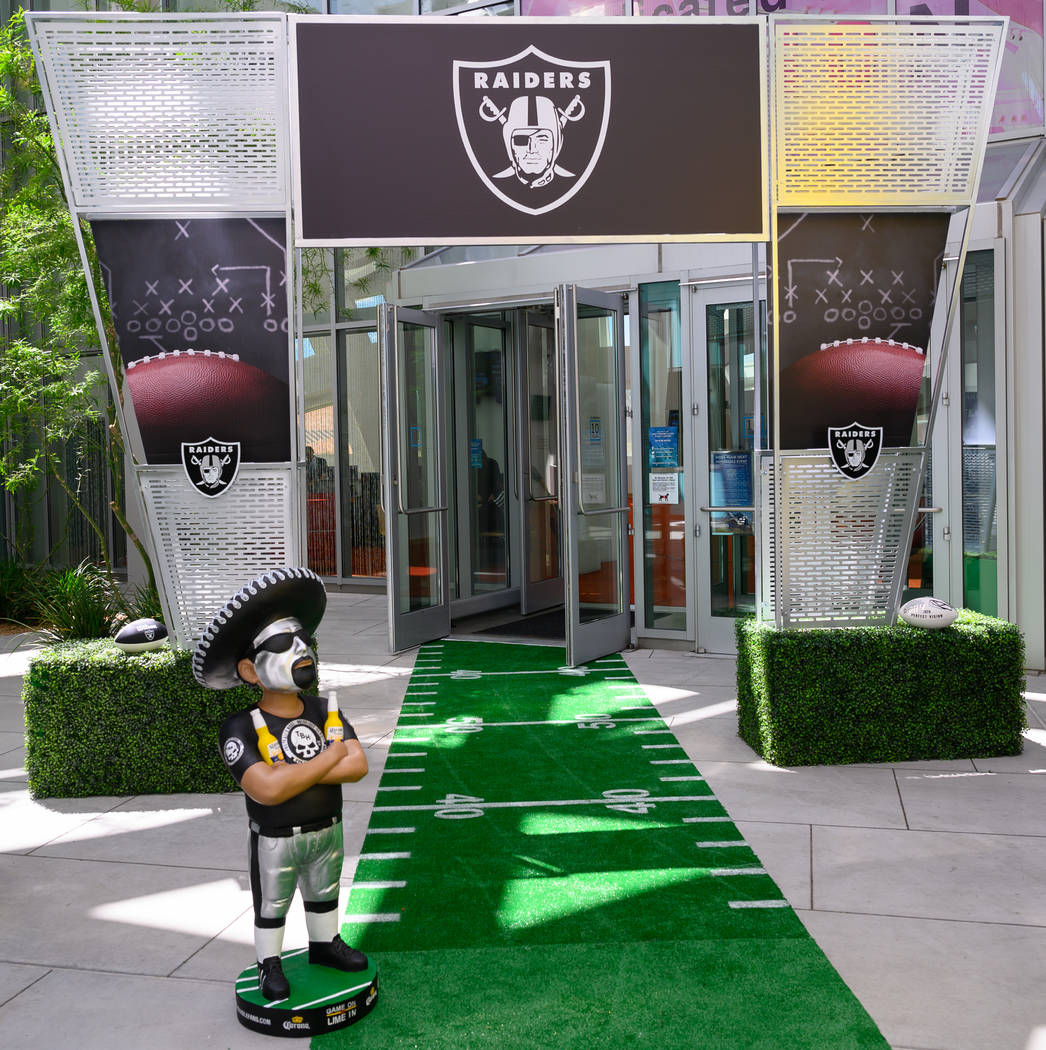 The entrance of the Cleveland Clinic Lou Ruvo Center for Brain Health is shown on Monday, April 22, 2019. (Tom Donoghue) 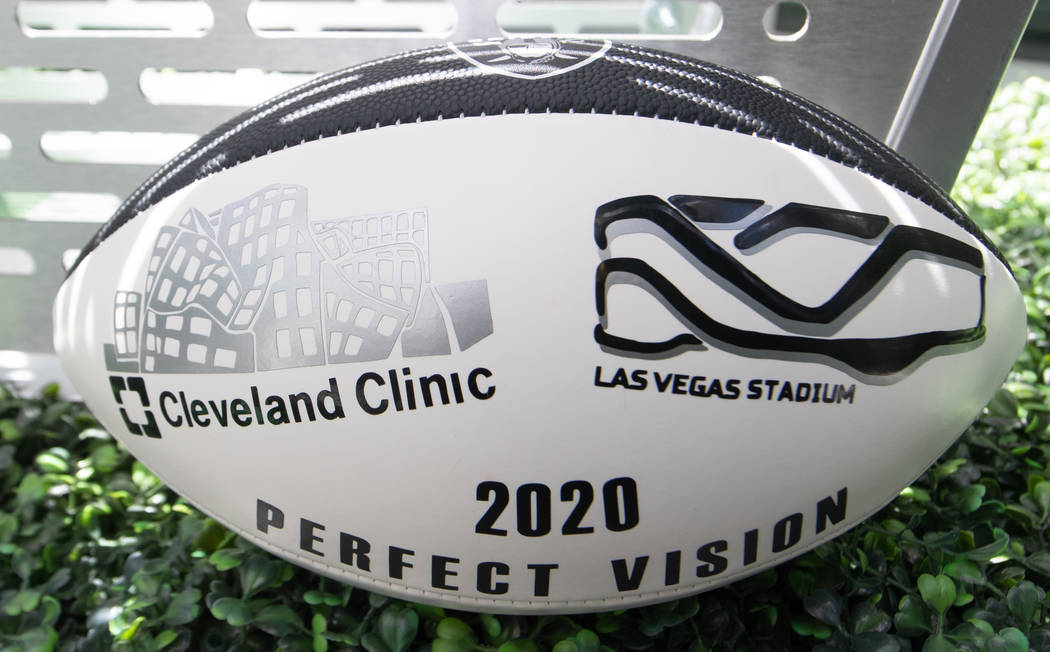 A customized football is shown at the Cleveland Clinic Lou Ruvo Center for Brain Health is shown on Monday, April 22, 2019. (Tom Donoghue) 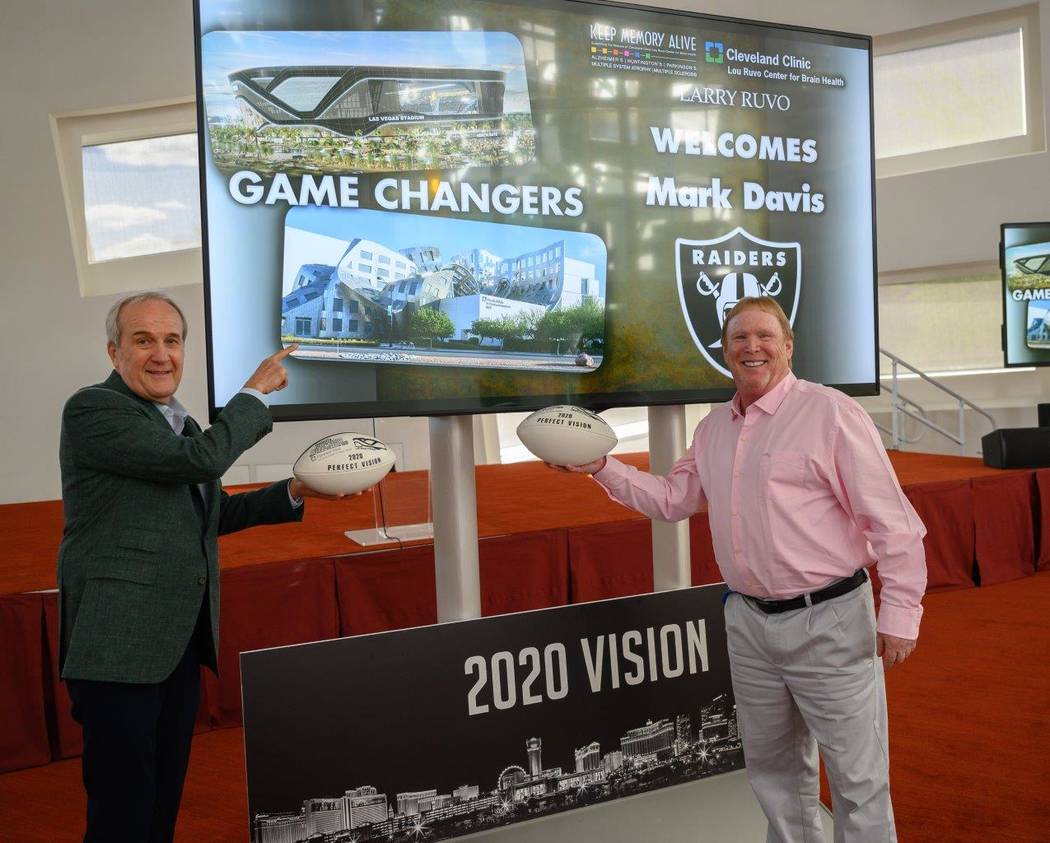 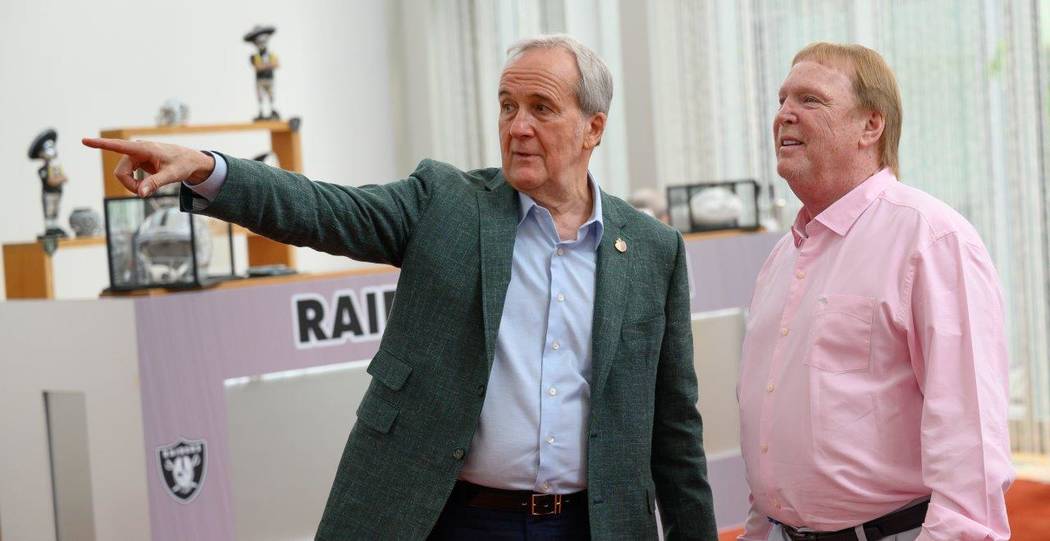 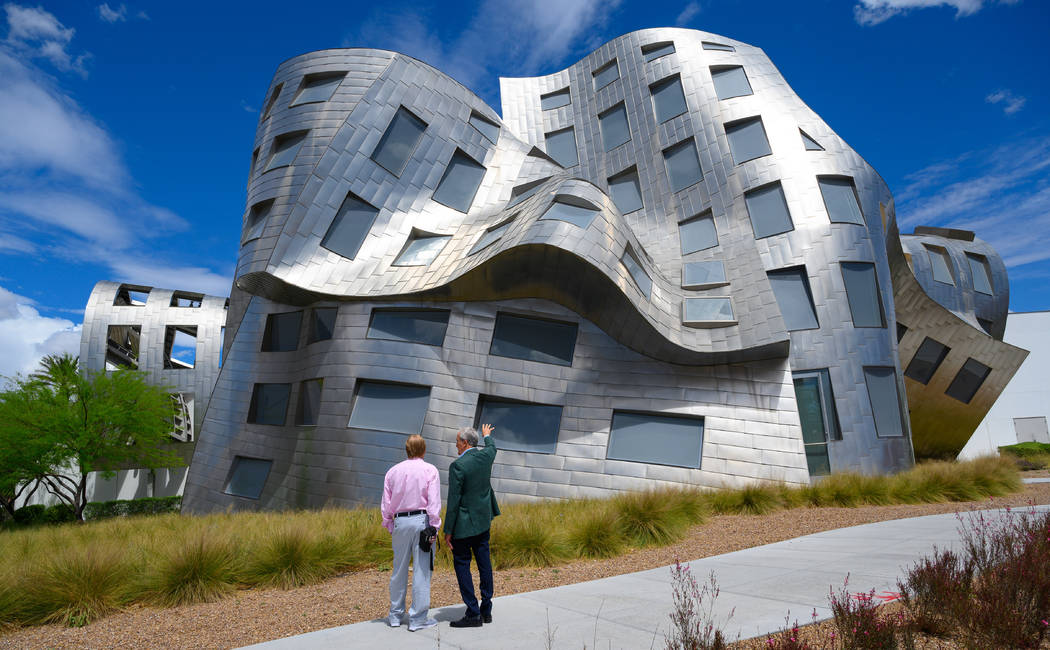 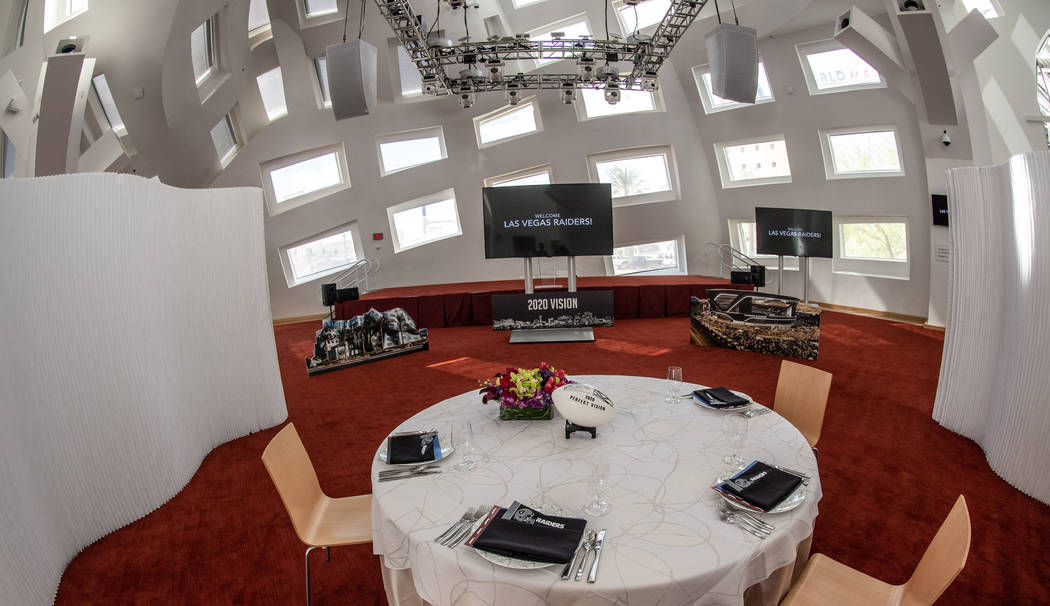 The interior of the Cleveland Clinic Lou Ruvo Center for Brain Health is shown on Monday, April 22, 2019. (Tom Donoghue)

The Power of Love was strong for Mark Davis. How strong?

So strong that he agreed to join the Cleveland Clinic Lou Ruvo Center for Brain Health Board of Directors before ever visiting the facility.

The Raiders owner pledged his support of the Cleveland Clinic during the Keep Memory Alive Power of Love Gala on March 16. During the event, Ruvo Center founder Larry Ruvo announced from the stage that Davis had signed on to join the board. Davis visited the Center in Symphony Park on Monday afternoon, the first time he’d set foot on the property.

“I was very impressed,” Davis said during a phone chat Tuesday. “It’s fantastic. First, I’m just proud and honored to be on the board. One of the biggest challenges in the National Football League, and all sports, is how to treat brain injuries.”

Since 2011, the Cleveland Clinic has been studying active and retired combat-sport athletes to determine how to detect changed in brain health after repeated blows to the head.

“The way the Cleveland Clinic is approaching that issue so aggressively is very exciting.” Davis said. “The Raiders have always had a commitment to excellence, and I see that in the Cleveland Clinic, too. The level of passion is really an inspiration and says a lot about Las Vegas.”

Davis was given a hero’s welcome. The Cleveland Clinic’s Event Center was decked out in the famous silver-and-black color scheme and logo. He was even presented with a silver-and-black helmet and matching football, both reading, “2020 Perfect Vision.”

“That was all Mike Severino’s idea,” Ruvo said, referring to his longtime friend and confidant. “He made it a real event.”

For the Raiders, that 2020 vision will be sharpened during Thursday’s NFL Draft.

“We’re going to try to get some players for Las Vegas,” Davis said. “The Raiders’ era in Las Vegas really begins Thursday.”

Last In Line, which is the current lineup of the late Ronnie James Dio’s backing band along with column fave Andrew Freeman, rocks Golden Nugget Showroom at 8 p.m. Friday. Last In Line is jammed with hard-rock virtuosos Vivian Campbell of Def Leppard, Vinny Appice of Black Sabbath, and Phil Soussan of Ozzy Osbourne’s band. That lineup is also the original Dio band.

The vocally powerful and generally excitable Freeman has spent time with the Offspring, along with a six-year run with Raiding the Rock Vault ending last year. Any rock act in Las Vegas would seem to be interested in adding him to the lineup. If you think that’s a hint, you’re right.

Wassa Coulibaly, the former “Zumanity” performer who opened Baobab Stage at Town Square in 2012, is celebrating the grand re-opening of the venue from 7 to 10 p.m. Tuesday. The evening starts with a jazz band, hors d’oeuvres and champagne to open The Baobab Cafe. Guests are then shuffled to Baobab Stage Theater for a night of entertainment featuring Cirque artists and those from other Vegas productions. End it with some VIP-reception action.

Coulibaly, originally from Senegal, moved Baobab Stage and her adjoining clothing boutique from her original Town Square location last year after her lease expired. The new space is just off the Square’s valet. Cost for Sunday’s fete is $35 (a mere pittance); tickets and info are available at www.baobabstage.com.

The re-opening of the Mirage/TI tram last week reminded of that tram’s most famous operator: “CSI” franchise creator Anthony Zuiker.

Zuiker ran the tram while working his way through school at UNLV. A decade ago, when asked what UNLV students would learn from his path to fame, Zuiker said, “I hope they’ll be inspired by this story about a kid that came from Las Vegas, worked on a tram for $8 an hour at the Mirage hotel, and had a dream to be in Hollywood.”

Note: The date for the Baobab Stage re-opening evening has been corrected in this post.