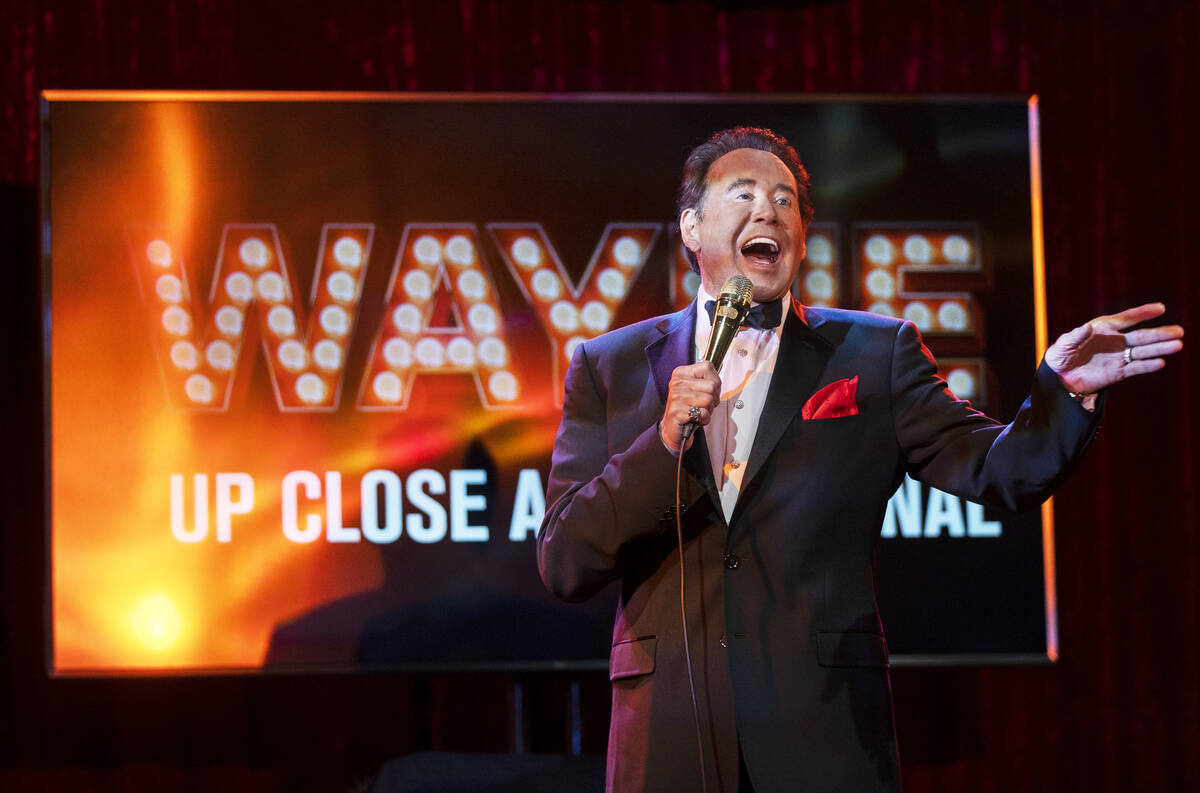 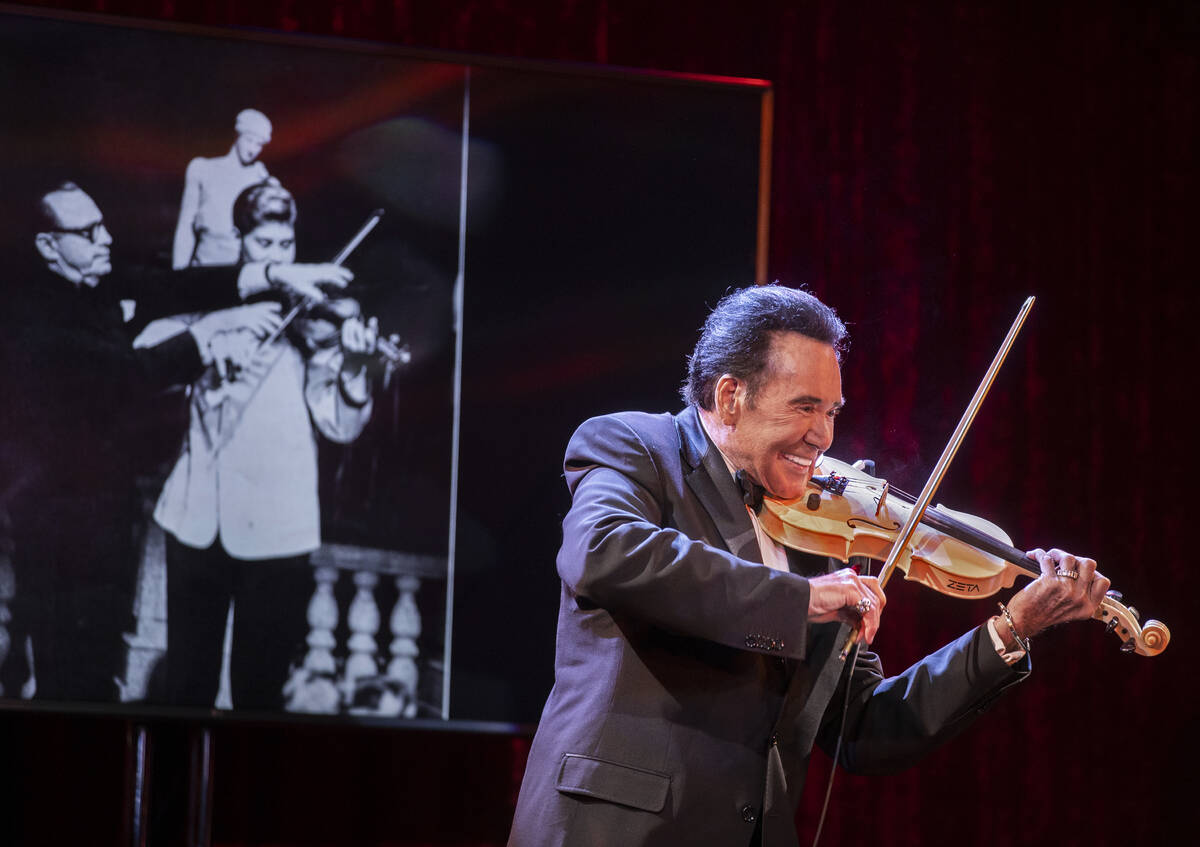 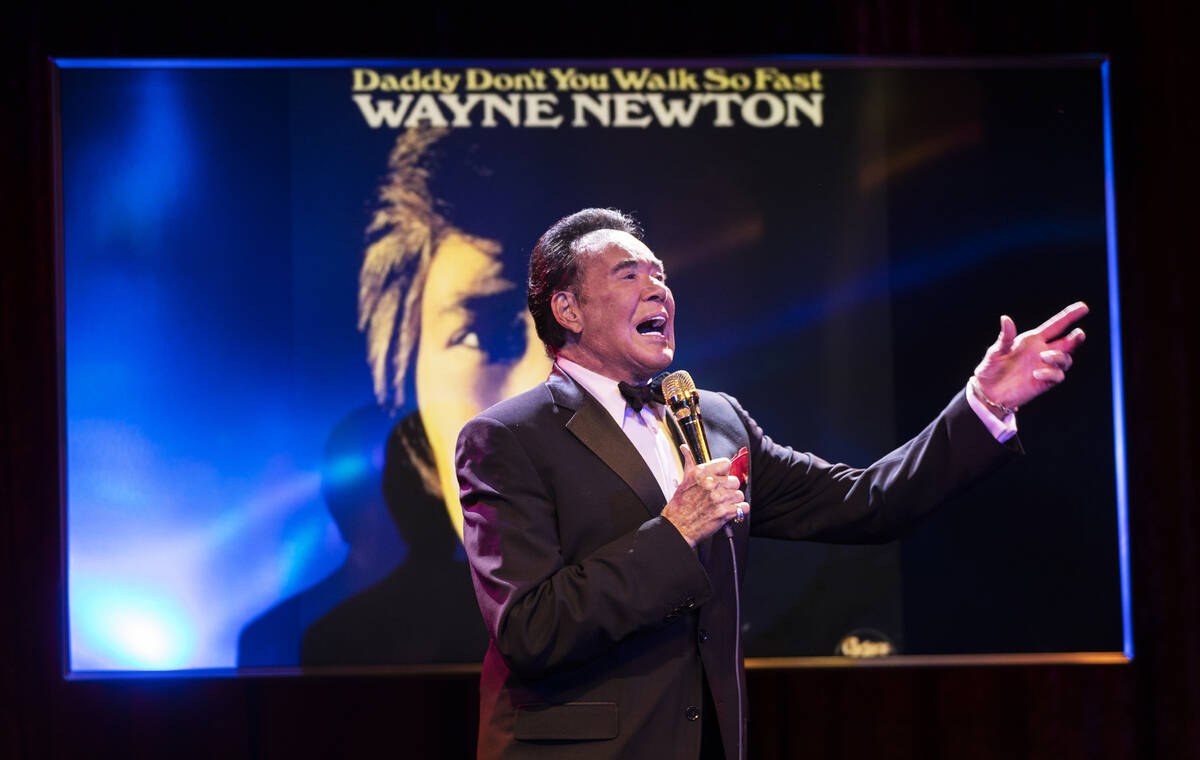 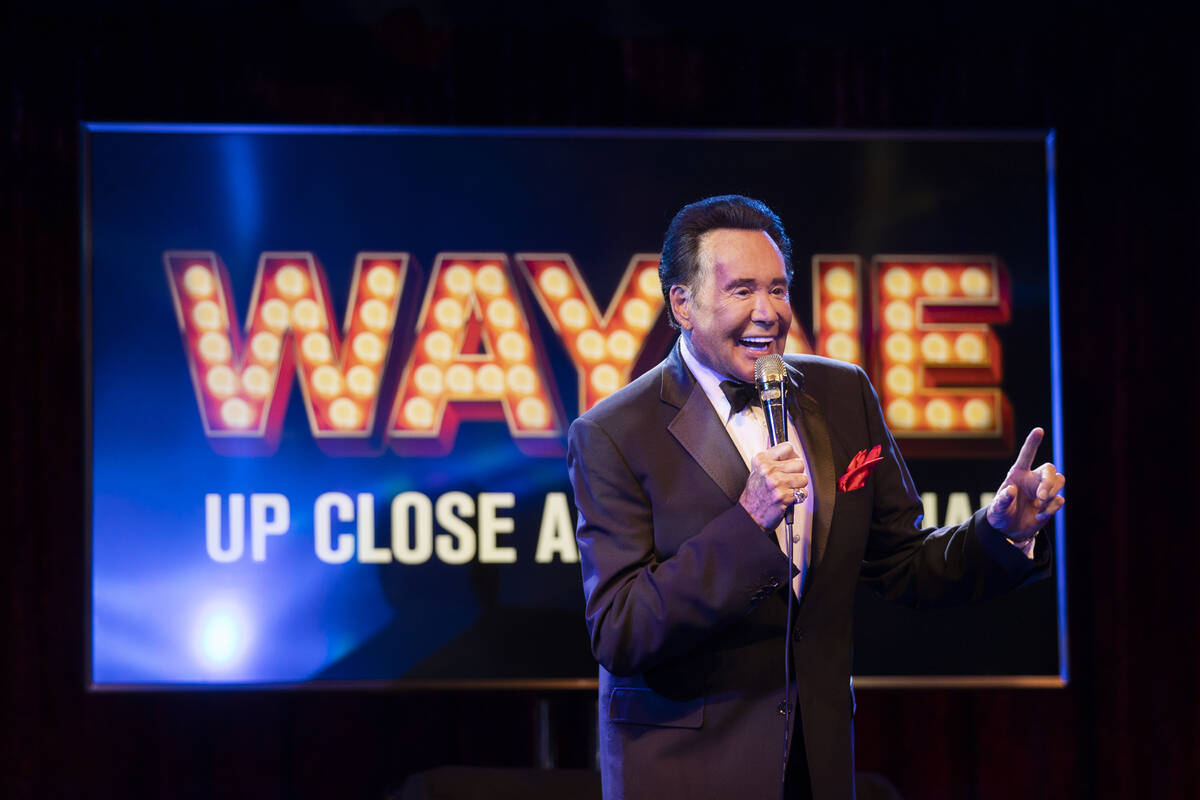 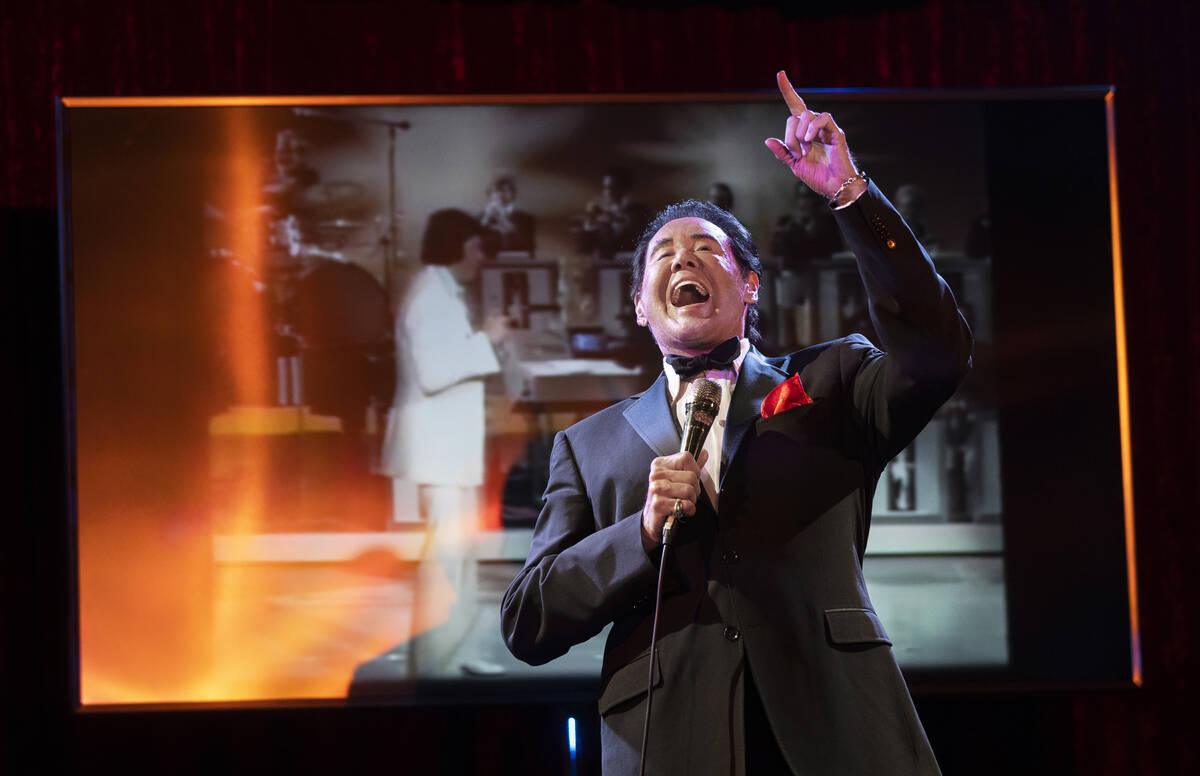 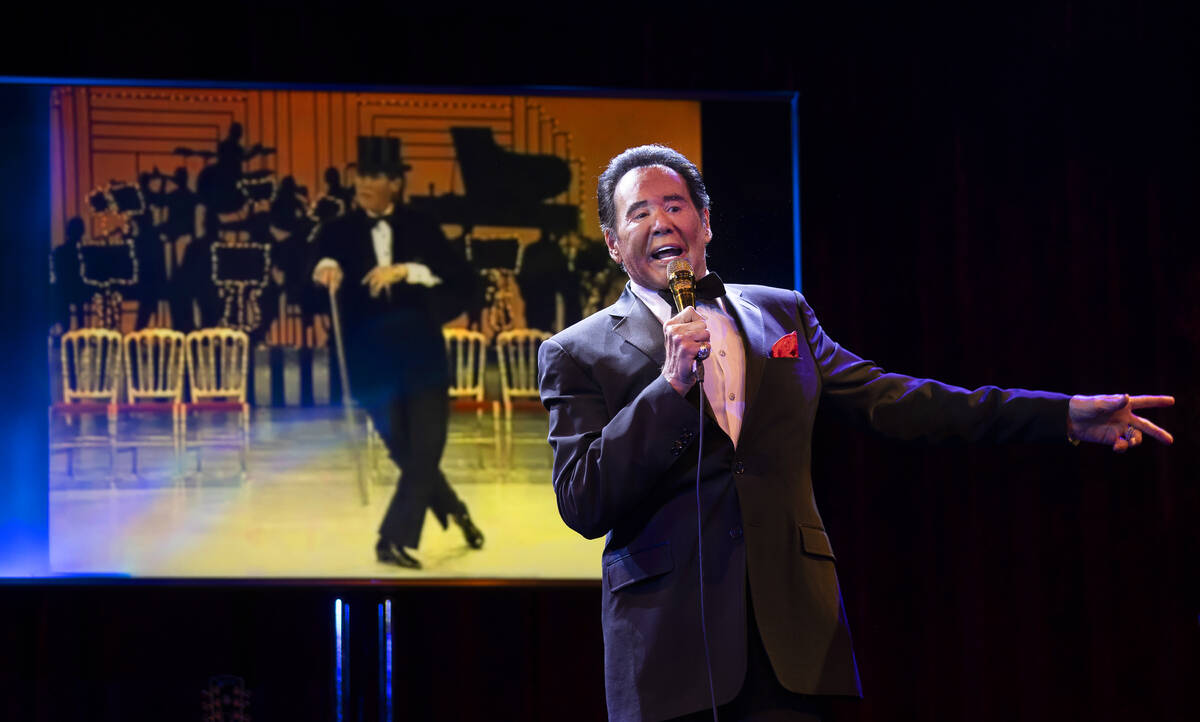 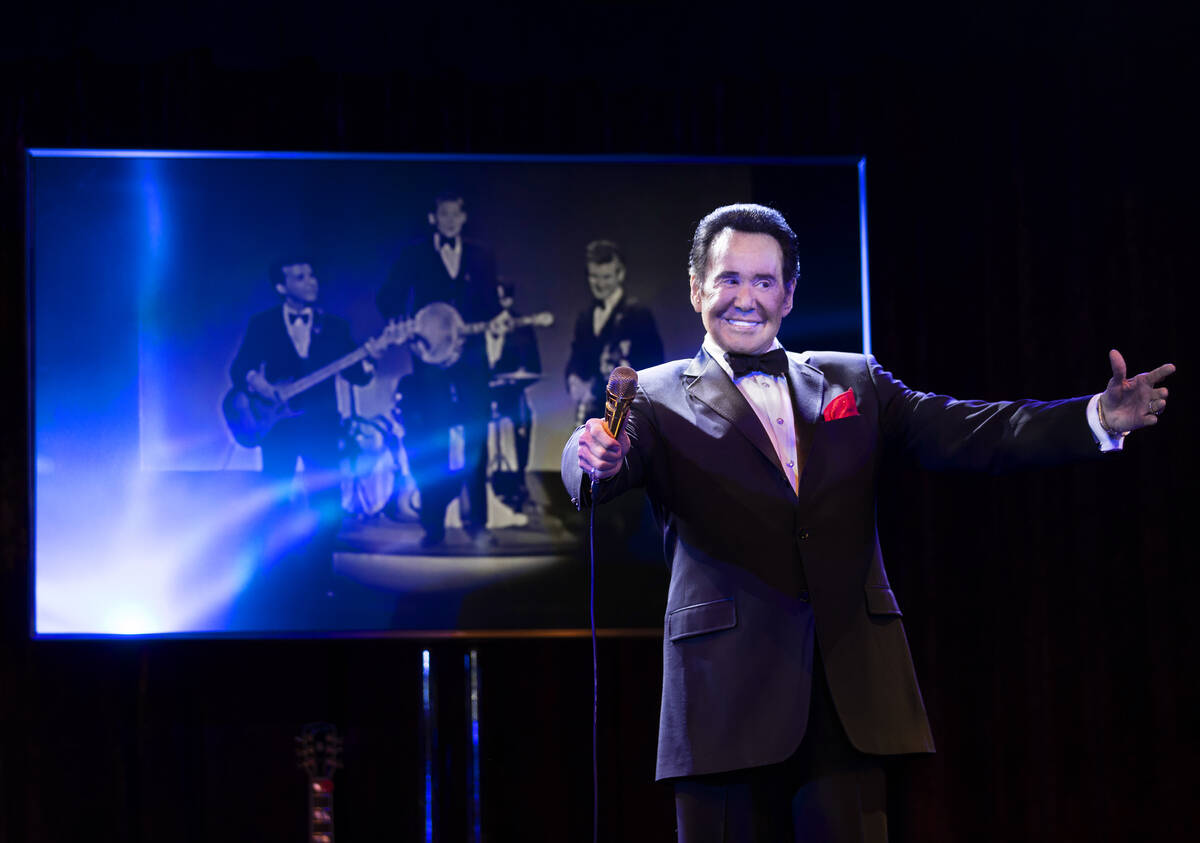 Wayne Newton unveiled the oldest new new prop on the Strip on Monday night in his return to the Vegas stage.

It was a pedal-steel guitar from the late-1950s. The piece was hidden discreetly under a black drape in the middle of the band. A video of Newton playing the guitar on a local TV show in Phoenix, from around 1960, was played for the audience. A teenage Newton ripped through a solo while ducking under the instrument, not missing a note. He was the Jimi Hendrix of the pedal-steel guitar.

Newton then pulled the drape away, and showed that very same guitar, replete with scratches and battles scars dating to his days at the Fremont Hotel.

“I had to turn it to show the audience all those scratches,” Newton said after his first show in nearly two years. “Otherwise they might not have believed it.”

The moment was a highlight in “Wayne: Up Close and Personal,” which has just relaunched at Wayne Newton Theater inside Bugsy’s Cabaret. Newton’s initial series at the theater runs for select dates through June. The Flamingo is where Newton began his showroom career in 1963.

As the 79-year-old Newton says, “It took me long enough to get back here, right? I’ve finally come full circle.” Newton embarked on his Strip career after previously performing at the Fremont Hotel’s Carnival Lounge beginning in 1959.

Backed by vintage videos and his three-piece band, Newton unspooled his life story for the opening-night crowd in the 200-seat theater. Once more, Newton sang “Danke Schoen,” recalling how he visited Germany for a TV show and had to explain he’d been pronouncing “Schoen” in the English translation. In standard German, the word “schön” is pronounced “shern,” but Newton needed something to rhyme with “explain” and “pain.” Newton feared that singing his version of the song “would start World War III.” He did not sing the song on that particular trip.

Newton also sang “C.C. Rider”; his best-selling song, “Daddy Don’t You Walk So Fast;” and “My Way” in the 90-minute show. He reunited with drummer and music director Marc Atkinson, keyboardist Mariano Longo and bassist Danny DeMorales. Newton has restarted with the same roster that performed “Up Close and Personal” at Cleopatra’s Barge at Caesars Palace up until the show shut down in March 2020.

Between numbers, Newton revived the the story of how he had been banned from the showroom at Harrah’s Lake Tahoe in the early 1960s. Newton had long headlined in the hotel’s the lounge. The execs wanted to keep him there. But Jack Benny, the superstar headliner at Harrah’s, saw Newton perform in Australia and invited Newton to open for him on the road — including his shows at Harrah’s Lake Tahoe.

Newton sadly informed Benny, “It breaks my heart to tell you this, but they have made it clear they do not want me to play in the showroom.” Benny responded, “If you’re not playing, I’m not playing.” Newton, who remembers playing every lounge in the state in those days, had reached a new level.

Newton also played terrific, vintage clips of his televised duets with Glen Campbell and Sammy Davis Jr. He showed the bracelet Frank Sinatra gave to him on his 35th birthday, which Newton said, “Looks like a handcuff.” Sinatra responded, “I have the other one.” He recounted his first meeting with Elvis. Upon introduction, both learned they were dating the same woman at the time, Sandy Ferra, now married to famed game-show host and longtime DJ Wink Martindale. The couple is still close friends with the Newton family.

Newton was clearly happy to be in front of an audience again. He had been forced to delay his return, limited because of back pain from an injury and surgery he underwent late this summer. The Vegas legend had an operation on his back in August to repair two vertebrae, after falling at his Montana ranch. He’s now lined up for an extended run through June at the place where is showroom career began.

At the close, Newton said through a standing ovation, “Thank you for sharing part of your life with me.”