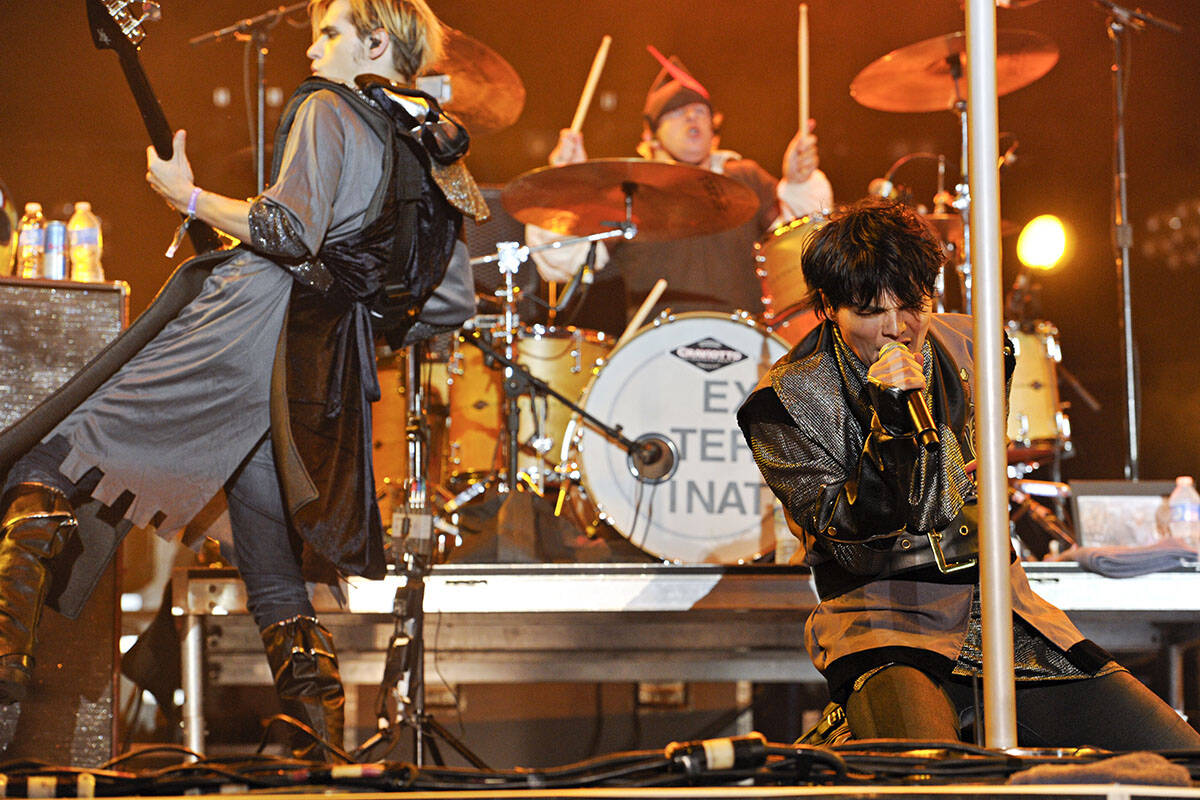 My Chemical Romance performs during day 1 of the Voodoo Experience at City Park on October 28, 2011, in New Orleans. (Photo by Amy Harris/Invision/AP) 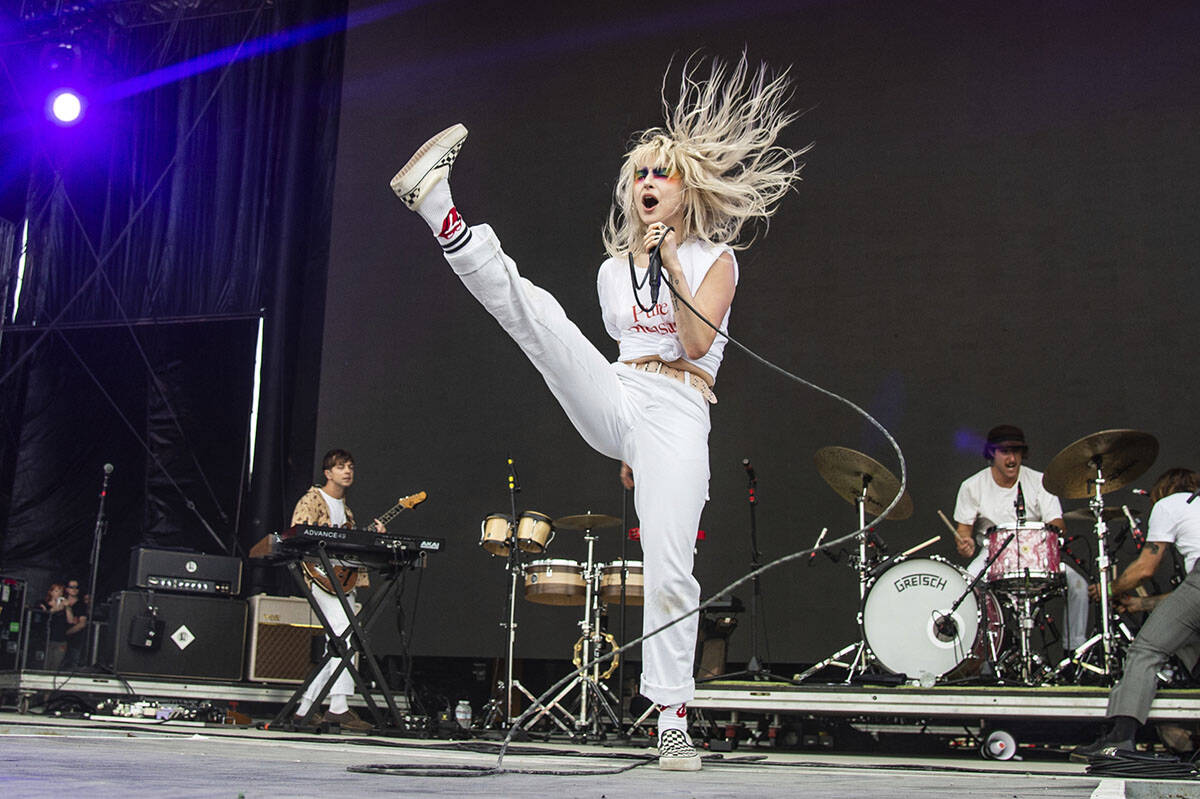 Hayley Williams of Paramore performs at the Bonnaroo Music and Arts Festival on Friday, June 8, 2018, in Manchester, Tenn. (Photo by Amy Harris/Invision/AP)

The top emo and rock artists of this generation are performing at the Las Vegas Festival Grounds about a week before Halloween.

The When We Were Young festival is set for Oct. 22, taking up the concert parcel on the southwest corner of the Strip and Sahara Avenue. My Chemical Romance, Paramore, A Day To Remember, The Used, Taking Back Sunday, Avril Lavigne, Dashboard Confessional, Jimmy Eat World, Alkaline Trio and the All American Rejects are among the dozens of artists descending on the daylong festival.

Organizers are offering a presale at 10 a.m. Friday for fans who sign up for early access to passes online at whenwewereyoungfestival.com. Following the presale, remaining tickets will go on sale to the general public at 2 p.m. Friday. GA tickets start at $224.99, GA+ tickets start at $399.99, and VIP tickets start at $499.99. VIP cabanas also will be available to purchase for guests 21 and older.

Headliner My Chemical Romance has not played in Las Vegas since 2011 at Red Rock Amphitheater, which closed soon after that performance. The band had co-headlined with Blink-182.

My Chemical Romance reunited in December 2019 and had been booked at T-Mobile Arena the following October when the venue shut down for COVID.

Wayne Brady canceled his show last Saturday at the Mirage Theater, issuing the announcement Friday. Brady is back June 18.

Kodi Lee’s return to “America’s Got Talent Live!” at Luxor has been pushed back to Wednesday. No reason there either, but hearing that he is under the weather and not because of COVID.

Ahead of their Feb. 19 performance at The Theater at Virgin Hotels Las Vegas, Slash ft. Myles Kennedy and The Conspirators have released the new song “Call Off The Dogs.” This is the first single from the album “4,” due Feb. 11. The band boasts some local color in guitarist Frankie Sidoris, a Las Vegas native.

We most recently saw Sidoris onstage at Allegiant Stadium on Aug. 27 as part of Mammoth WVH, fronted by Wolfgang Van Halen, son of the late guitar legend Eddie Van Halen. The band opened for Guns N’ Roses, and is the first rock group to play Allegiant.

Lioz to the Attic

Comedy magician Lioz is the latest resident headliner at The Magic Attic at Bally’s. An alum of “America’s Got Talent,” “Britain’s Got Talent” and “Australia’s Got Talent,” Lioz opens Feb. 24. Showtimes are 10 p.m. Thursdays through Sundays, prices from $24.95 to $54.96 (not including fees) and ages 18 and over.

“I don’t really feel like I “perform” but rather live every piece of magic,” Lioz said in a news release announcing the show. “Every mind-feat and moment feels like it’s done for the very first time. The show I’ve created for Las Vegas includes my latest magic tricks, newest routines that have not been shown on TV.”

The production is a partnership of John and Shannon Bentham’s Ivory Star Productions, and ex-Caesars Entertainment exec Damian Costa’s Pompey Entertainment company. The show is said to contain “explicit material.” That facet alone sets it apart from most magic productions in town.

We well remember the heady days and nights of the rooftop Ghostbar at the Palms. The place was renamed Apex Social Club in 2018, under Clique Hospitality management. It is expected to open under its original Ghostbar name when the property does, likely to happen in the second quarter of this year.

No word yet on the hotel’s booking partner at The Pearl concert theater, where Live Nation has held that role. Also eager to know the status of Studio at the Palms, the now-historic recording annex that has been dark since the hotel closed up in March 2020.

Turner to burn it

Earl Turner’s first show of 2022 is on Feb. 3 at Myron’s at The Smith Center, what the great showman calls “the crown jewel” of Vegas venues. Turner should know, he’s played many rooms over the decades. His “Ultimate Showman” performance is something else, well-suited for the venue. “There aren’t any slot machines, no specialty restaurants, bowling alleys or any of the usual trappings of a casinos. There are no distractions.” Which is how an ultimate showman likes it.

Kelly Clinton-Holmes returns to “The Sit In,” her string of 13 sold-out shows, at 7 p.m. Thursday (doors 6 p.m.) at The Nevada Room at Commercial Center. Excalibur headlining magician Mac King is guest-starring. The dinner-and-show nightspot has been dark since just before New Year’s Eve.

Column fave Tymara Walker presents the “Soul of Jazz” night at Gatsby’s Super Club inside the Gambit nightspot at 2031 W. Sunset Road in Henderson. Walker is joined by the SOJ All-Stars, with dinner at 6:30 p.m. and the show at 7:30. Walker most recently backed Chaka Khan on tour (singing mostly the soprano parts) and is simply fierce. She’s singing a lot of covers, but listen for the original that asks the musical question, “Where’s My Money Bih?” Hit LVLivePresents.com or call 702.292.9494 for details.